4x4 Diesel engines are getting smaller

Have you noticed the trend towards smaller and smaller diesel engines, especially in the popular ute market?

Not too many years ago the Mitsubishi Triton had a 3.2-litre diesel, but it was replaced by a 2.5-litre and then a 2.4-litre. Likewise, engine capacity in the Nissan Navara dropped from 3.0 litres to 2.5 litres and then to 2.3 litres. Meanwhile, the Holden Colorado now has a 2.8-litre diesel, whereas the previous generation had a 3.0-litre diesel. And, most recently, the new Toyota Hilux arrived sporting two new diesels, a 2.8 and a 2.4, where the previous model had a 3.0-litre.

The exceptions to this downsizing trend are the Ford Ranger and Mazda BT-50 ‘twins’. Both use a 3.2-litre five-cylinder diesel of Ford origin, whereas the previous Ranger and BT-50 were powered by a 3.0-litre Mazda diesel.

However, the talk now is that Ford is currently looking at a smaller diesel for the next-generation Ranger. There’s also a rumour that Mazda will go its own way with the next-generation BT-50, but that’s only speculation at this stage and merely an aside here.

If Ford did wish to fit a smaller engine to the Ranger, it could do a lot worse than the 2.7-litre V6 diesel currently used in its soon-to-be-discontinued Territory, and previously used in the Land Rover Discovery 3 and 4. Or it could use a single-turbo version of the 3.0-litre bi-turbo V6 currently found in the Discovery. Both of these engines are of course Ford designs, although Peugeot had a hand in the original 2.7. 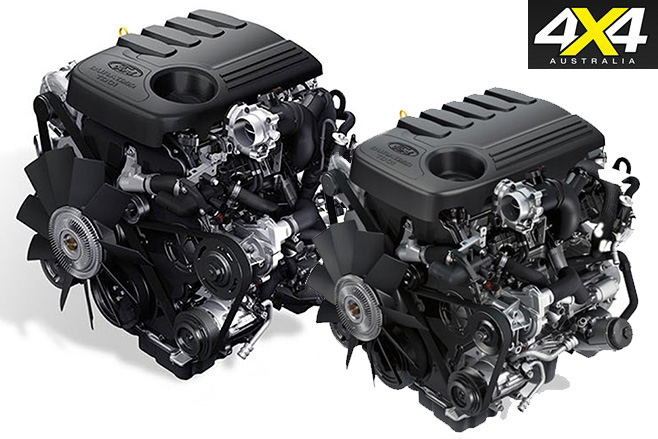 Smaller engines have a few benefits, including better fuel economy and the fact that they weigh less. Lighter engines also don’t need such a heavy chassis structure to support them, so the weight savings are multiplied. Smaller-capacity engines are also physically smaller, which means they are easier to package with a vehicle and leave more room for passengers and cargo.

Manufacturers can happily make this move to smaller diesel engines because more sophisticated fuel-injection systems and turbochargers, among other things, mean that engine downsizing doesn’t have to come at the expense of power. In fact, all of the new smaller-capacity diesels produce more power and torque than the engines they replace.

The downside is that a small engine has to work harder than a big engine to make the same power, and even harder to make more power. That just comes down to the inescapable laws of physics.

There was a time, however, when ‘working harder’ for an engine meant revving harder. That was certainly the case when comparing small and large petrol engines, such as a four-cylinder and a V8. But these new diesels don’t rev much harder than diesels of old. Instead, they work harder in another way – namely,they have higher effective operating cylinder pressures.

The good news is that while these smaller diesels work harder than diesels of old, it’s a lot easier to design an engine to cope with higher operating pressures than it is to design an engine whose longevity won’t be compromised by constantly high engine speeds.