Why the Porsche Boxster should have been four-pot from birth

Love it or hate it, the four-cylinder Porsche Boxster is real. Here’s why it should always have been that way from the very start

BACK in the mists of 1996 the Porsche line up was not the veritable banquet of high-class vehicles that it now is, including SUVs, sportscars, a big sedan, wagon and a hypercar. Pre-1996 Porsche showrooms were a boutique affair with just three models on display – a 911 (993) and two front-engined coupes that were feeling their age – the 968 and 928.

So you might imagine the arrival of the Porsche Boxster – a fresh-faced mid-engined rear-drive convertible would have been received with unanimous warmth and applause. It wasn’t though, and there can be few automotive injustices as undeserved as the labelling of Porsche’s bouncing baby by some harsh critics as the ‘poor man’s 911’. 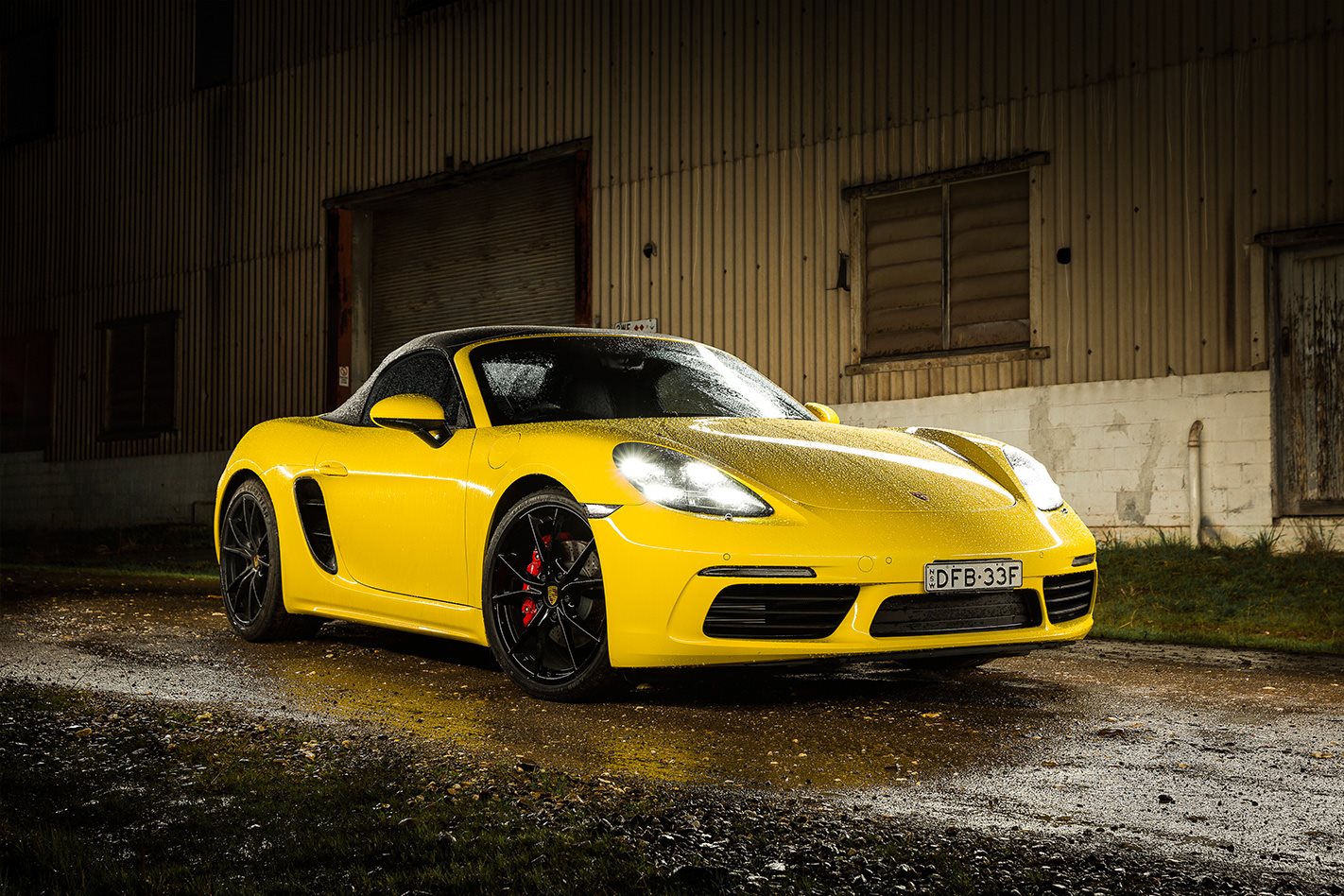 In isolation, the original 986 was an accomplished and hugely rewarding car to drive and fully deserving of recognition in its own right, but with a flat-six engine powering the newest Porsche family member, some chose to draw a line to its more powerful, better-known and more expensive 911 sibling.

When the Boxster S arrived in 1999 its larger engine was just 200cc smaller than the new 996 911 which had dropped air cooling in favour of liquid, just like the Boxster’s six. This arguably strengthened the connection between the pair and fuelled more comparisons.

In the mid-1990s the decision to slot a six into the Boxster was less about emissions and more about cost, with significant savings made possible by parts commonality with the incoming water-cooled 911. 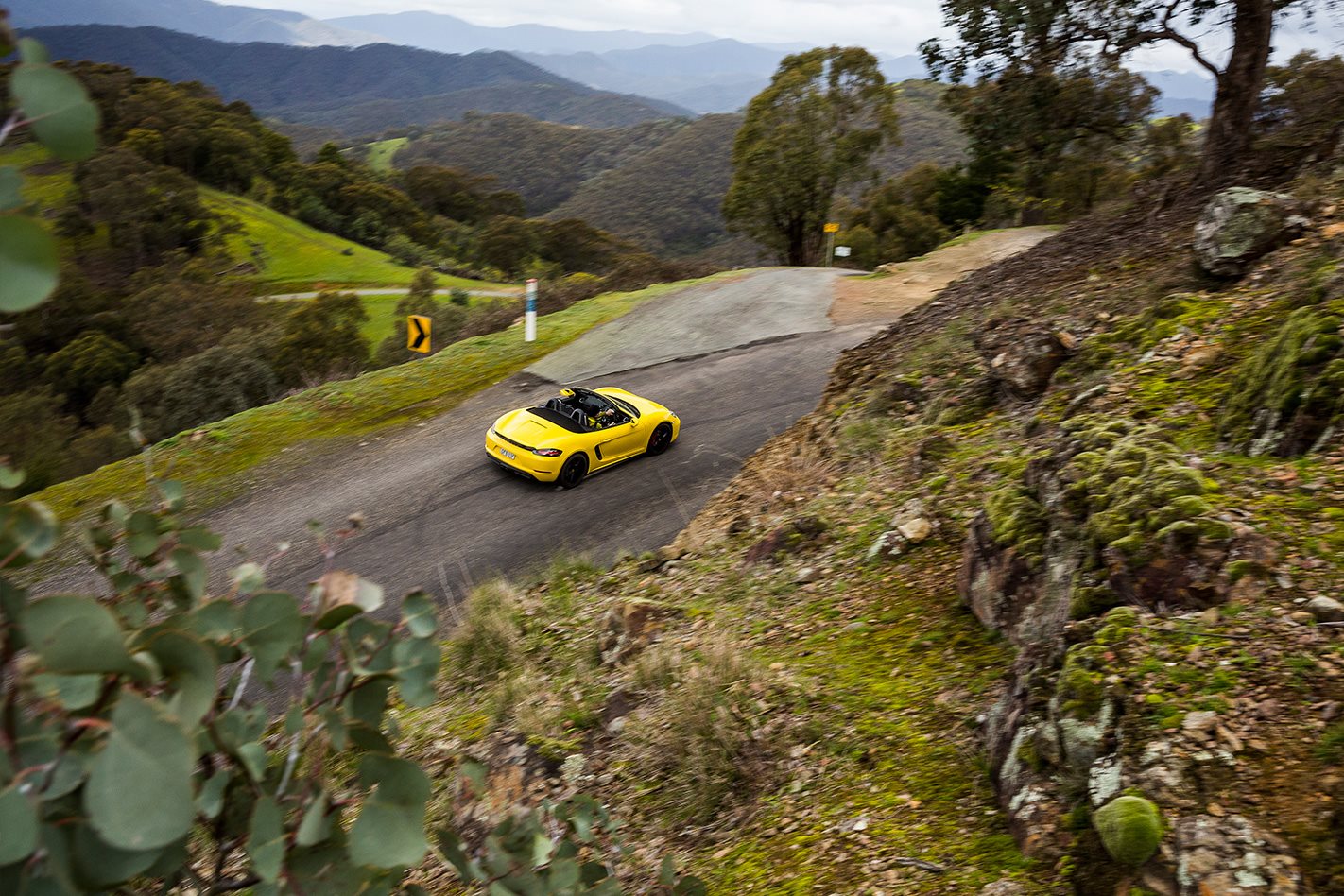 Many believed that the adoption of a flat-six gave the new arrival credibility and recognition as a proper porker, but that didn’t stop a sea of naysayers. Could the Boxster’s infant years have played out differently?

Jump ahead 20 years from the original Boxster’s debut and the launch of the fourth-generation brought a significant change. Gone was the naturally aspirated flat-six and in its place a turbocharged flat-four in 2.0-litre or 2.5-litre varieties.

The amputation of two cylinders and addition of a hairdryer caused yet more Porsche purist arguments, but the axe of ever tightening emissions regulations loomed and there are few car makers that haven’t resorted to downsized turbo engines to meet tough CO2 standards. 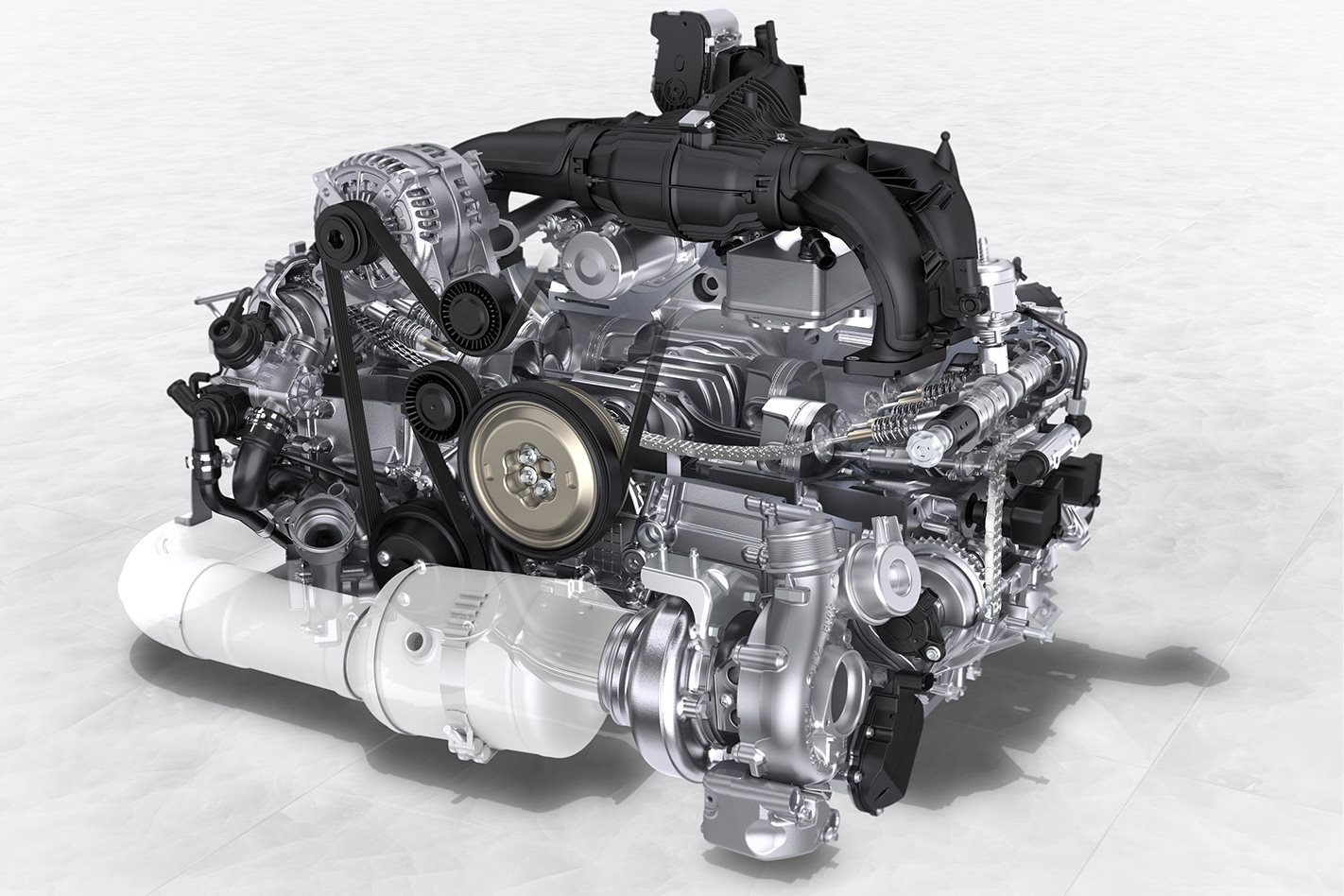 Stuffy suits, fuel-sipping cylinders and bottom-line conversations aside, the new, more efficient 718 engine turned out to be a great match for the Boxster and Cayman brace.

For a start, just its vital statistics on paper are a step up over the outgoing six. Compared with the previous 3.4-litre 232kW Boxster S, the new 2.5-litre knocks out 257kW. Even more than the exclusive Boxster GTS, which was squeezed to 243kW.

It’s also faster, with the zero to 100km/h dash done in 4.2s compared with 4.7s for the GTS, or 4.8s in the case of the last atmo-engined Boxster S with PDK auto and Sport Chrono pack. 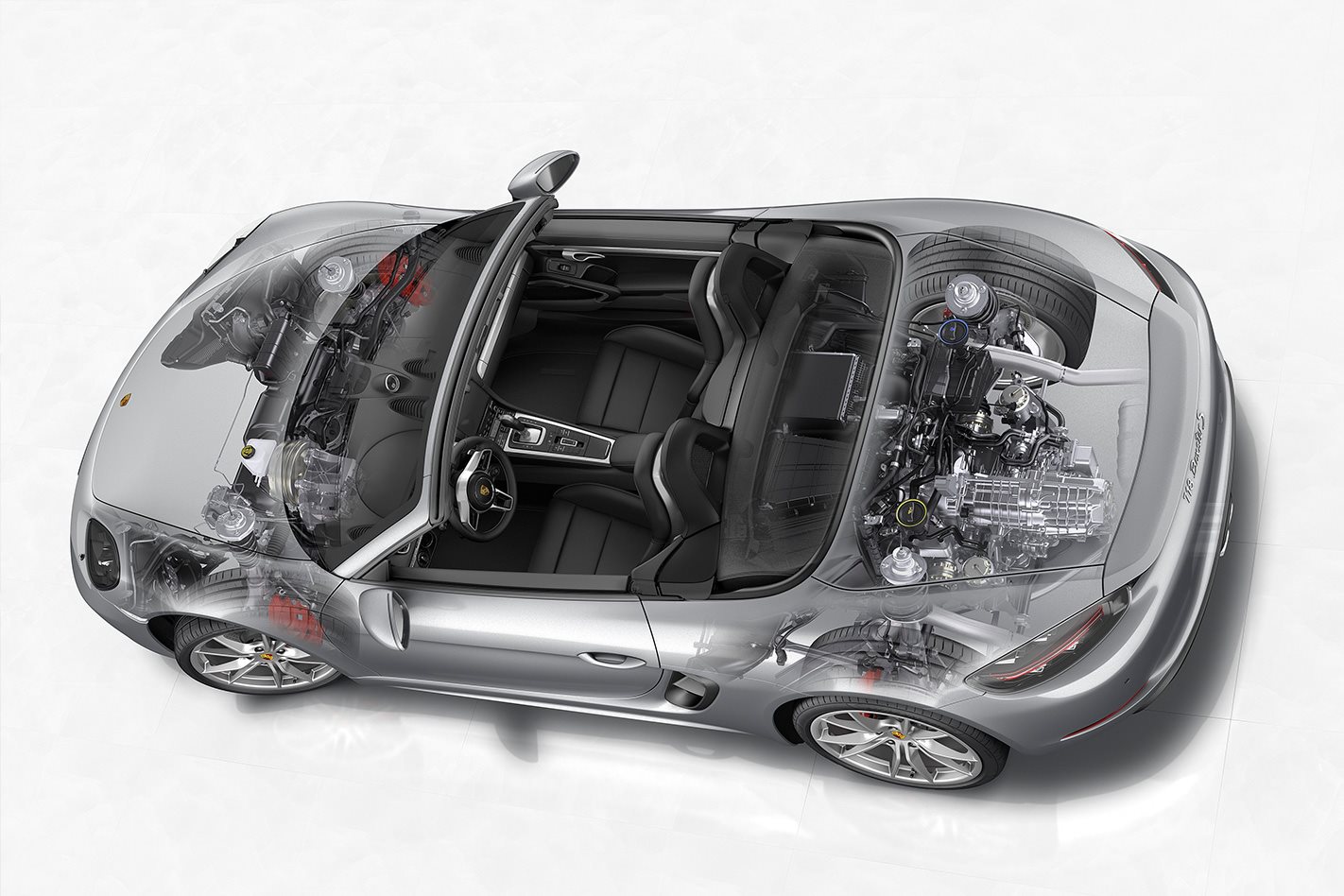 Want more? Despite the turbocharged induction (which ordinarily pushes peak power further down the rev range) the 718 Boxster’s power peaks at 6500 rpm and will push on through to 7500 rpm before hitting the red line – higher than the six.

Those figures are backed up with real world performance and fun, and the Boxster S is a properly fast machine. A massive torque swathe of 420Nm comes in at just 1900 rpm and lasts through to 4500 rpm.

Turbo lag is minimal and actually enjoyable, like waiting for the drop in your favourite house track. But when the torque punches in, the Boxster launches with an eagerness like no other version before it. Keep your toe in until the power takes over and you’ll have a smile plastered on your face until the tank is dry. 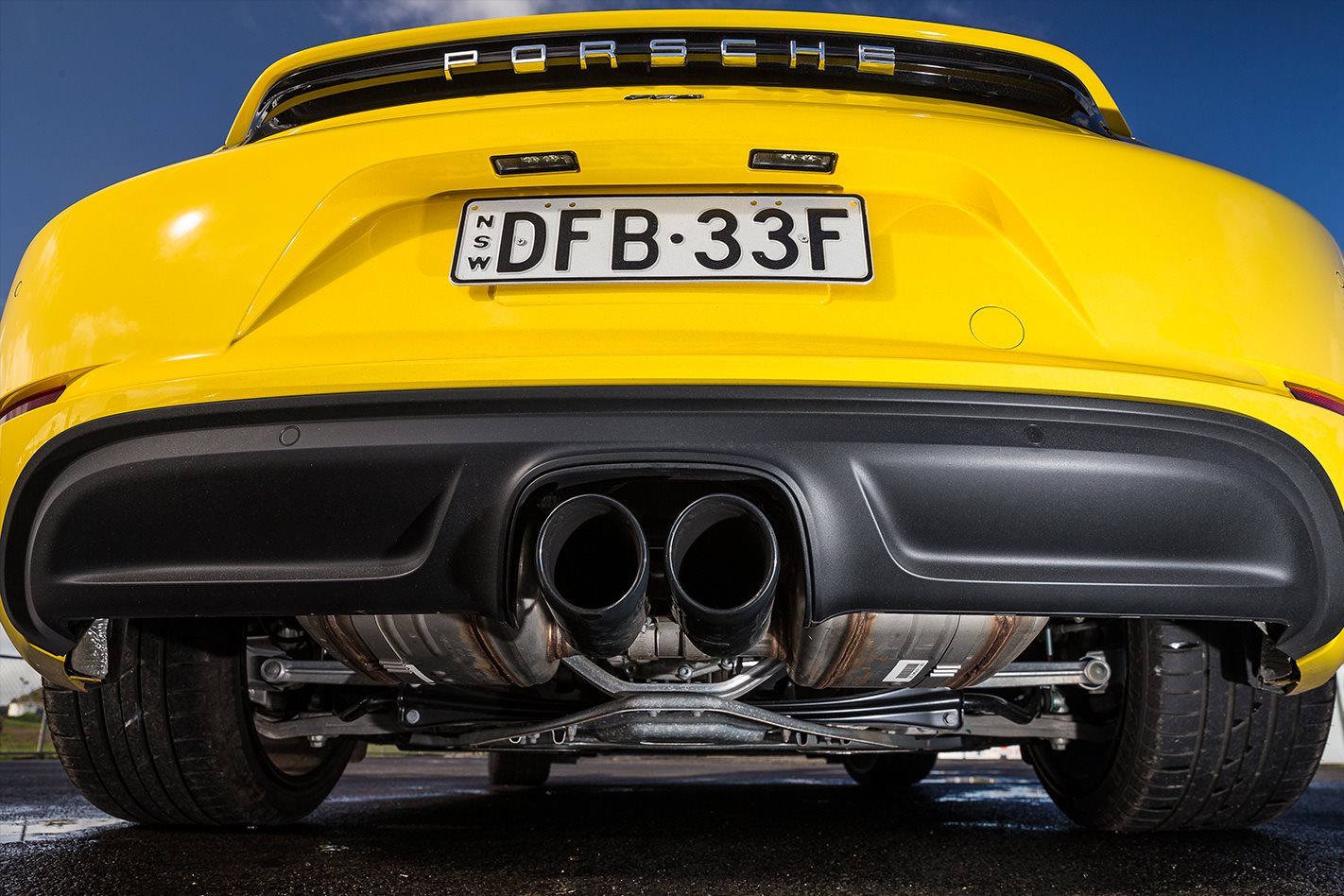 Perhaps the most legitimate criticism of the four cylinder is its soundtrack and there is no doubt that the discontinued flat six sound or smoothness will never be beaten by two fewer cylinders, but if you can leave the past behind, the new turbo four has a personality all of its own.

At idle the off-beat sound is not unlike an original Volkswagen Beetle which doesn’t necessarily impart an aggressive quality to the Boxster but is certainly charming. Mid-range revs when paired with the optional sports exhaust take on a far more purposeful note and any scoffing that the sound is similar to a WRX is immediately quashed as the revs rise further.

Beyond 5000 rpm the Boxster sings with its own unique voice not like anything else on the road and certainly nothing like an AWD Japanese sedan, because even the WRX STI is begging for another gear at 6600 rpm. 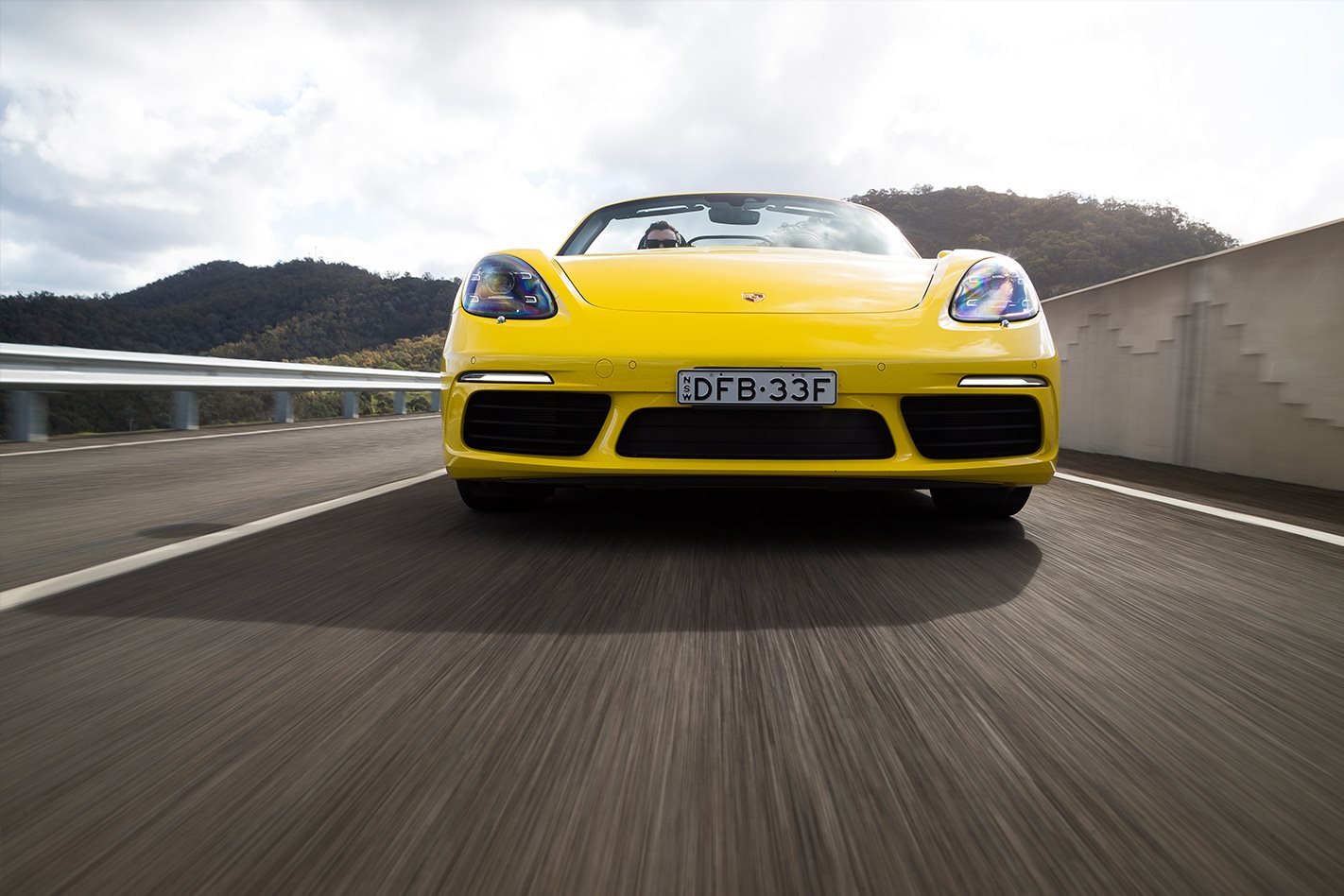 Drop the hood and the orchestral theatrics get even better, bringing in the wind section and a clear turbo whistle right in your ear.

Even during more sedate driving, the flat four anthem is infectious and charismatic. Flick the sport exhaust to its loudest setting when cruising and the rhythmic drumming behind you is as comforting as a heartbeat.

In the face of compelling figures and two very different power-delivery experiences, the subject of which engine is the perfect match for the Boxster still sparks heated discussion.

But a four-cylinder Porsche is certainly not a new idea and, while a degree of animosity surrounded the introduction of the first in-line four-cylinder 924 (which effectively borrowed a Volkswagen commercial vehicle engine), as the family evolved through 944 and 968, they were all eventually accepted as important parts of Porsche’s tapestry. 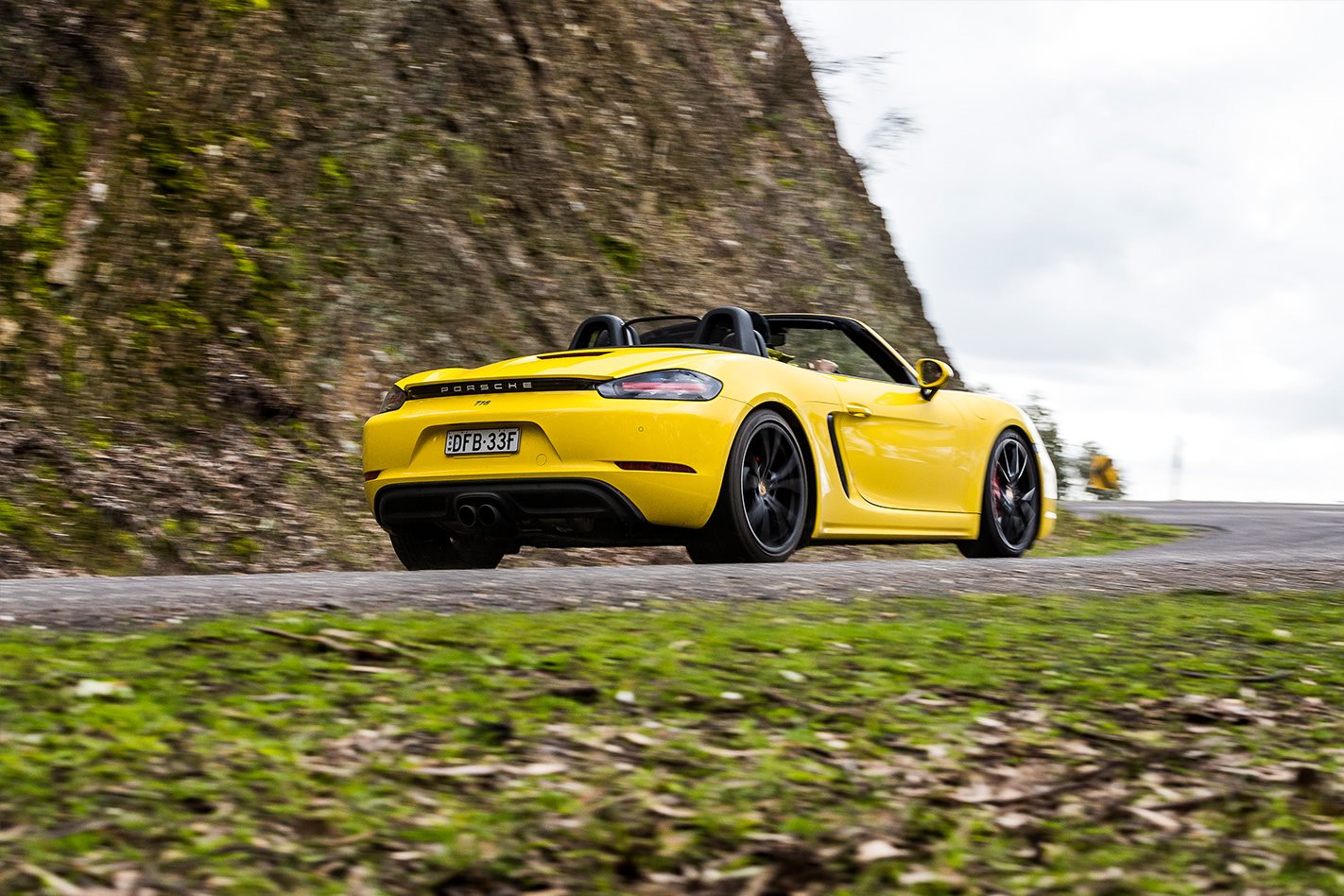 If you need any convincing, look at the values of the best examples, including the 968 Clubsport and Turbo S, and 944 S2 and Turbo.

Engine note and refinement aside, this author believes the Boxster is best with a turbo four, and its individual strengths prove that it didn’t necessarily need a flat-six to be recognised as a true Porsche in 1996 any more than it needs one today.

But a new chapter is about to play out in the Boxster and Cayman story, and an addition to the 718 range might finally satisfy everyone. 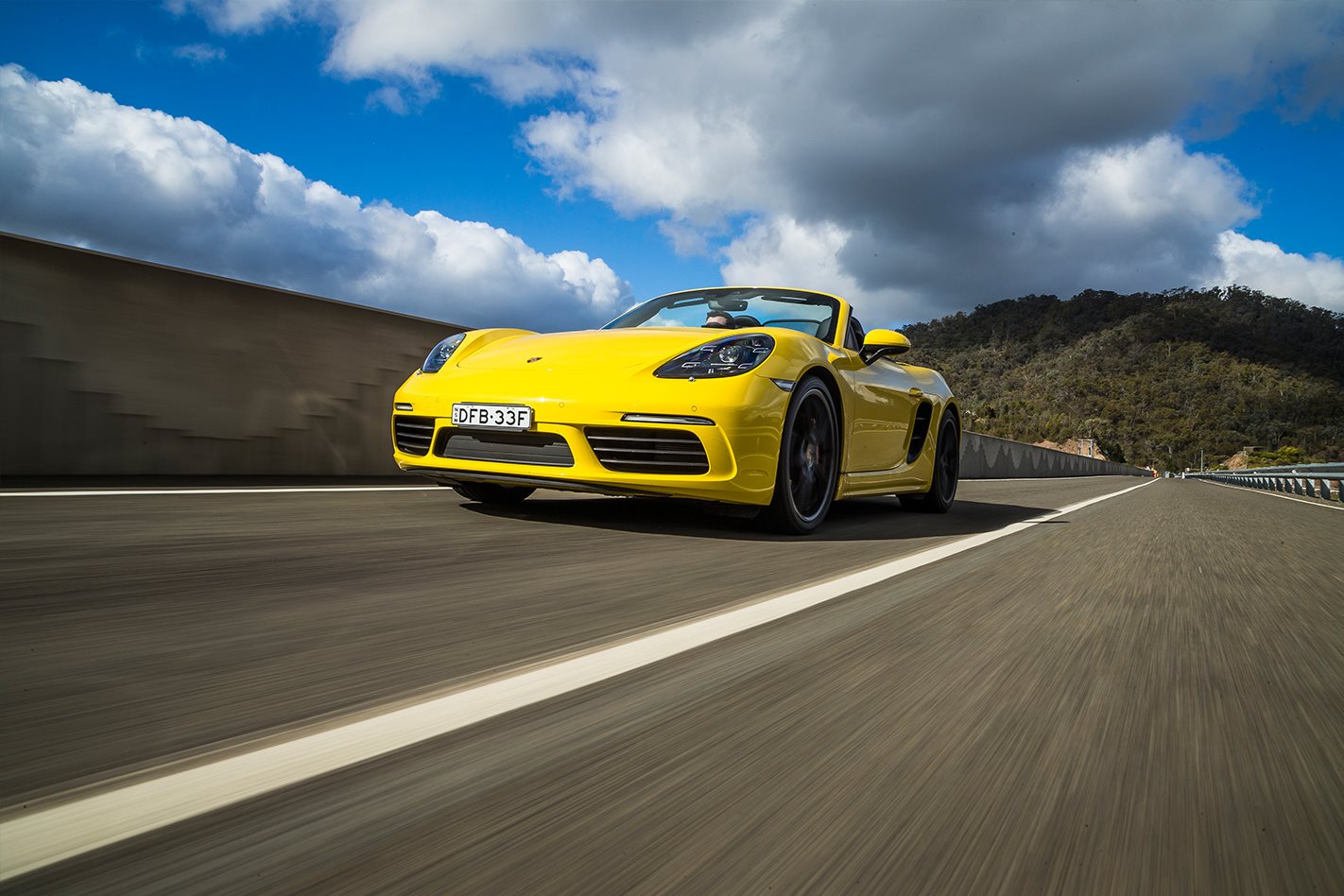 If the rumours are to be believed, a returning Cayman GT4 performance halo will bring back six-cylinder power for Porsche’s baby, wrapped up in a 718 body, and the Boxster/Cayman’s tempestuous voyage might at last reach calmer waters.

Had the original Boxster launched with a turbocharged four-cylinder engine before maturing into a six-cylinder as it seems poised to do, critics both frosty and friendly would likely have ignored its high-achieving six-cylinder sister looming in the background, and given it the untainted discretion it deserved.