Hyundai Golf GTI-fighting i30 N on Aussie soil, even before it's revealed

HERE IT IS – the Hyundai i30 N, Korea's first crack at not just a hot hatch, but a proper performance car.

And while we don't know what it looks like yet, we've driven it. And it's good.

And it's all very secretive. We can't actually tell you where we drove it, other than at a "private test facility" somewhere in NSW. Can we say it's on the Central Coast? Probably not. 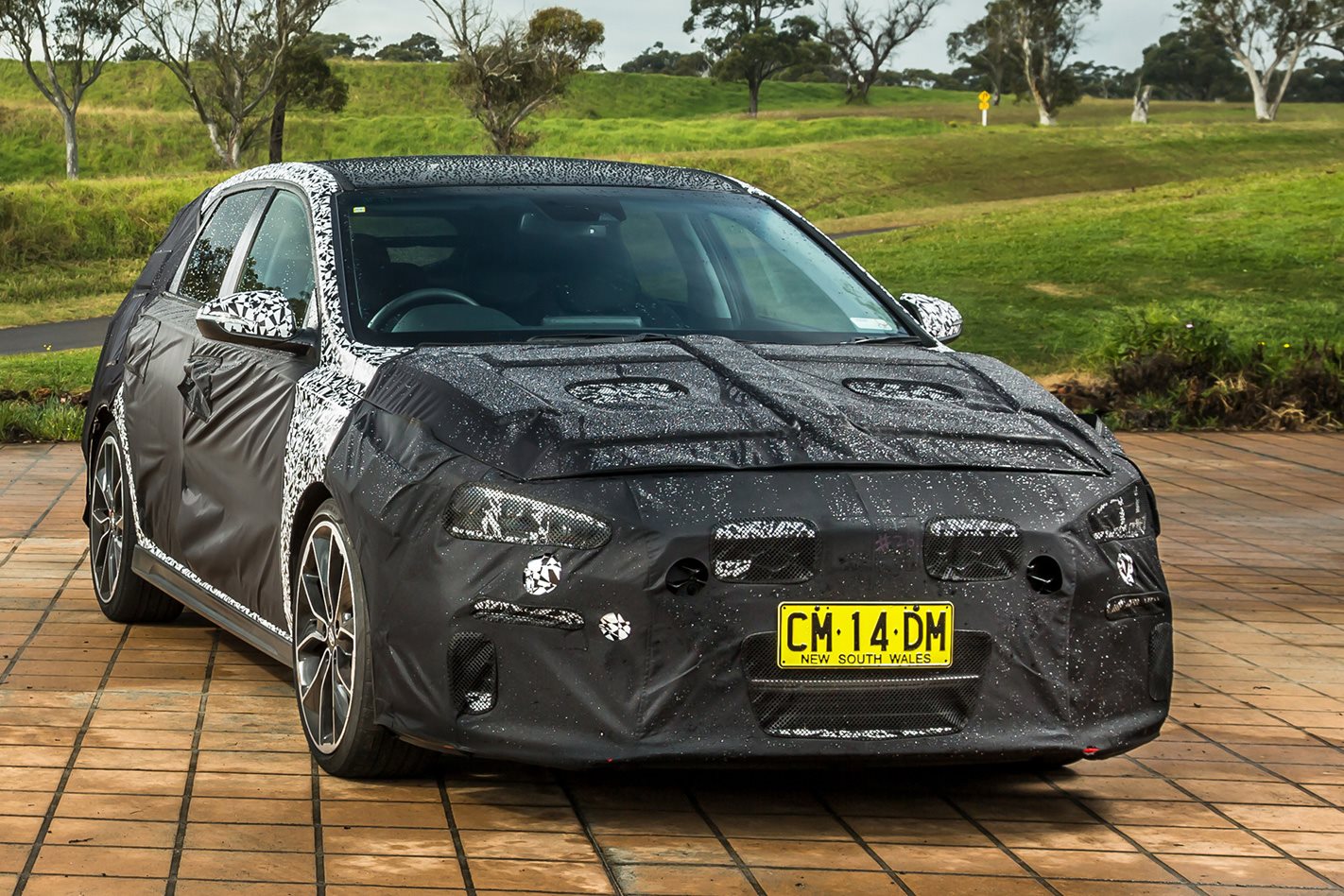 And though MOTOR photographer Thomas Wielecki was there on the day – and we got him to take some photos of things just for us – Hyundai banned him from sending particular shots to us. Very secret indeed.

And bizarre, given just how open Hyundai is about many other things to do with this car.

Somehow, they've managed to get two prototype cars for MOTOR (and other media) to test and not only that, they've flown in the honcho who's creating them, ex-BMW M Division boss Albert Biermann. Who, by car company standards, is a breath of fresh air for his frankness, thoughtfulness and honesty.

Ask him a question and he'll give you an answer, sometimes so candid you get a feeling you should be checking if you can publish it. (As a more lowly media outlet would, don't worry.)

So first, before we even sit in these camouflaged prototypes, let's recap what we know. Hyundai wants to win over people like you and me, who take driving seriously, with a new performance brand called N Division. 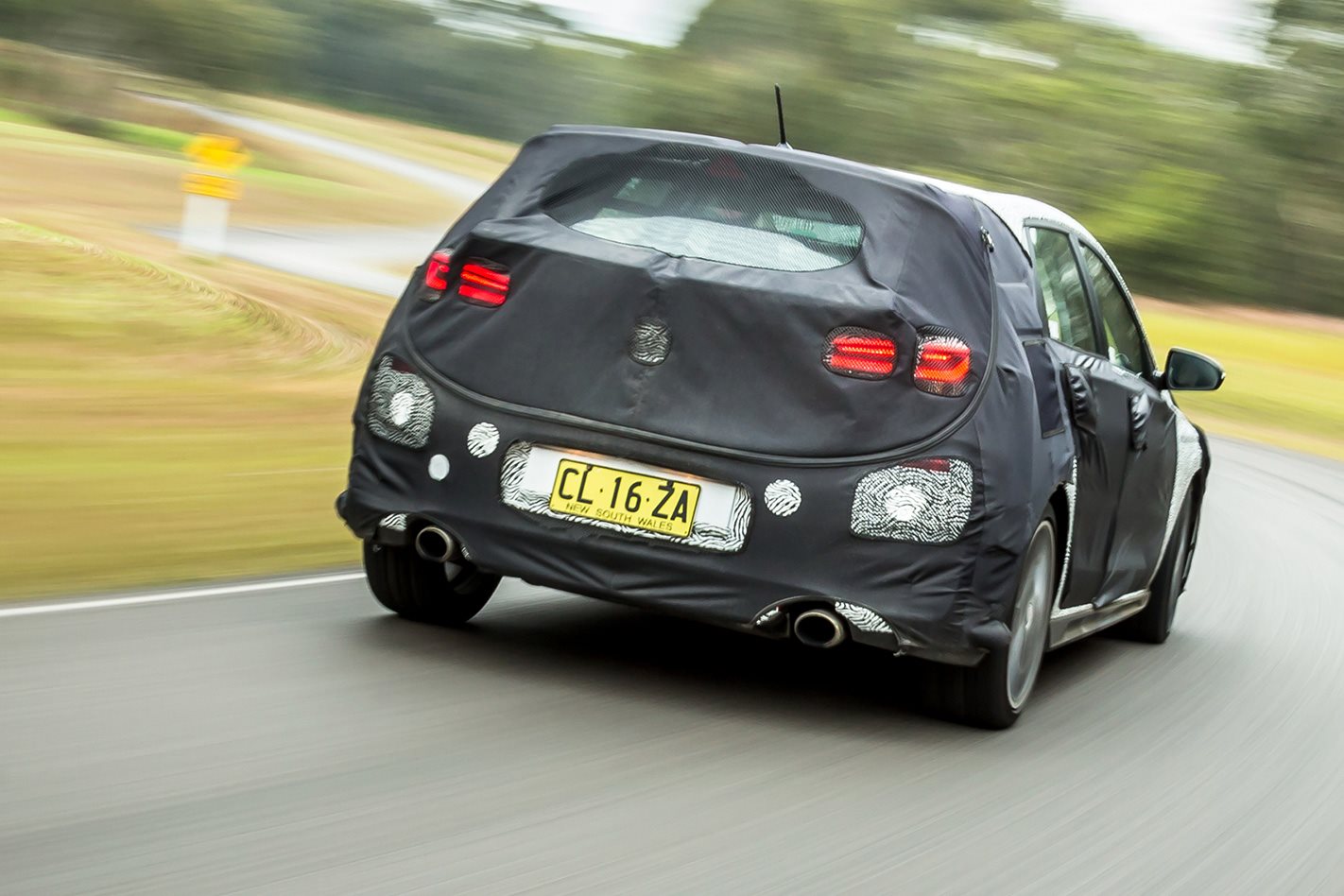 Its first product will be the i30 N. It will come in two states of tune, both with a turbo 2.0-litre four-cylinder (a heavily modified Sonata engine), front-drive.

The i30 Ns are six-speed manual only for now. Both weigh around 1450kg. The lower-tune i30 N gets 18-inch wheels, 184kW/380Nm and an open differential (but one that brakes a spinning wheel).

The "Performance Package" model will have 202kW/400Nm, an electronically-locking limited slip diff, 19s, bi-modal exhaust, bigger brakes and better seats. Both cars have coloured shift lights in the instrument binnacle.

Both also have rev-matching on downchanges – and upchanges – but you can turn this off with a button on the steering wheel.

And that's not the only button you'll find there, either. In fact, the scope for adjustability by way of drive modes is unprecedented for cars around this price.

As we slink into the pre-production i30 N it becomes apparent, this is a seriously high-tech hot hatch. 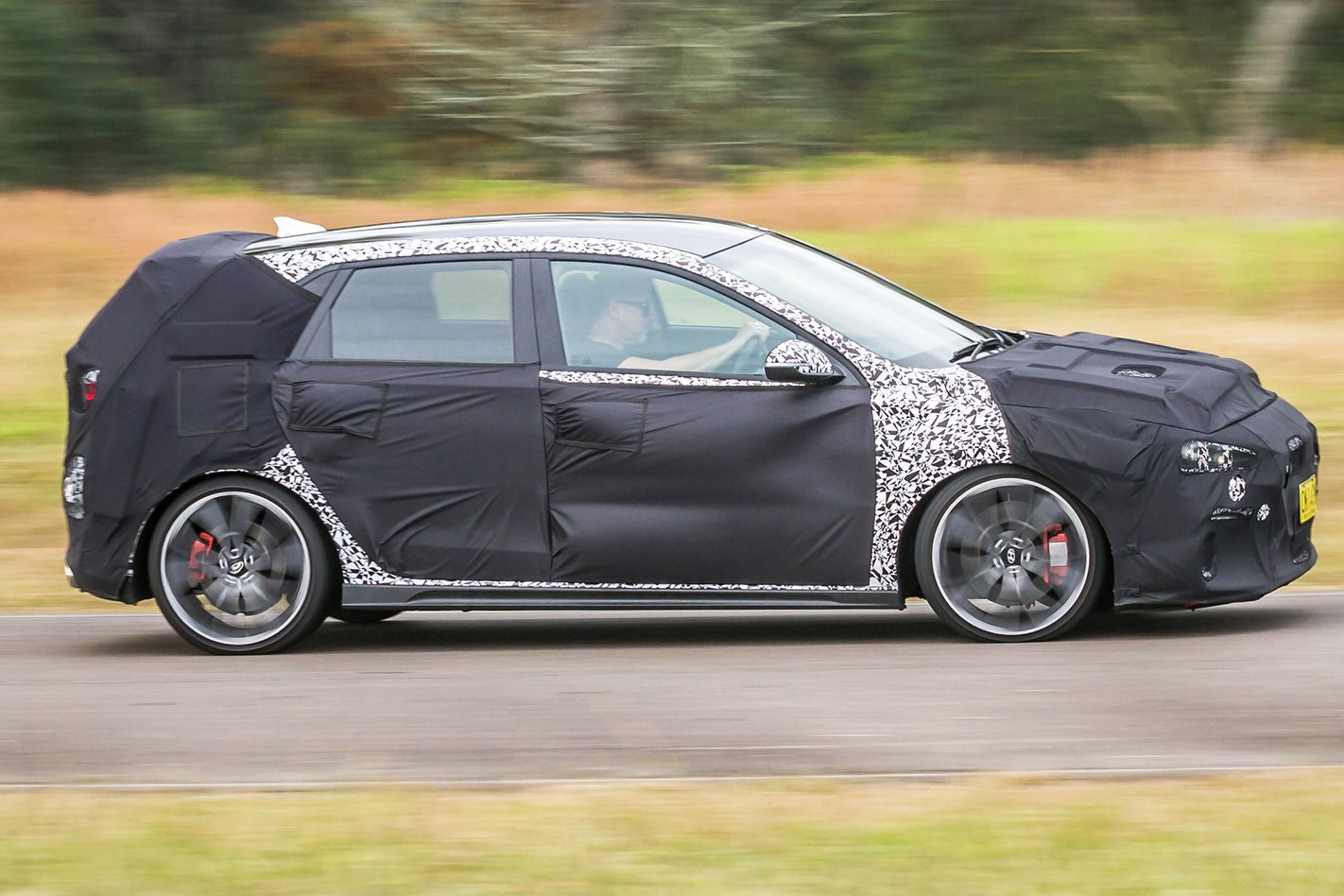 Of course, if you want your dampers soft, your ESP half-off, and your engine eager, you can have that in a custom mode.

The i30 N in this way feels very novel, like a big toy you want to play with; a Golf GTI will give you some level of engine/chassis/noise customisation, but not in the same fun and nerdy way an i30 N will.

Driving out on track, by ourselves, we can't quite believe we're suddenly in what is probably a very expensive prototype and encouraged to go as fast as we like, around what is quite an unforgiving circuit.

We are intensely curious to drive this much-anticipated, much-hyped first hot hatch from Korea, yet also don't want to be That Guy Who Crashed It.

First impressions are... fantastic seats, rivalling those in a Toyota 86. Terrifically direct and well-weighted steering, if lacking a little feel, not unlike a Golf GTI's. 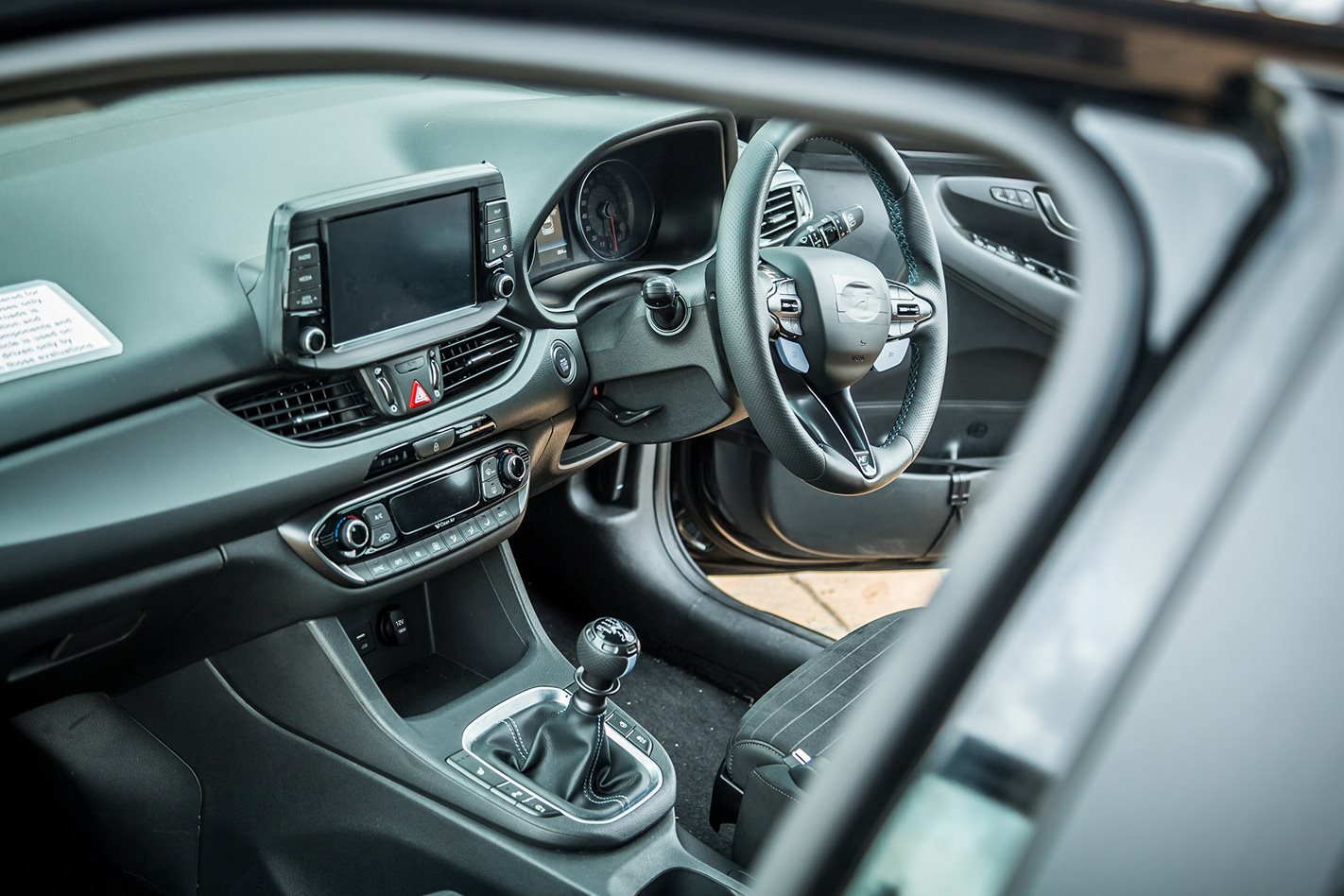 Strong front-drive traction and plenty of grunt – and, for a forty-something-grand car, outstanding brakes with great feel, resilience and stopping power.

You can very much tell it's a Hyundai by the gearchange and clutch feel, neither of which will make lists of 'most satisfying-to-use manual gearboxes', but still feel fine.

And interestingly, the i30 N sounds a bit like a Focus RS, a loud, gurgly exhaust at idle, enthusiastic with pops on the upchanges and crackling on the overrun, and a fair bit of enhanced growl coming courtesy of a mechanical, engine bay-mounted noise symposer (like a Golf GTI/R). Aurally, there's a fair bit going on.

This is a swift car and, crucially, feels like a proper hot hatch – not a warm one. It has plenty of grip. Particularly in the rear. Where a lot of people who love hot hatches, don't want it.

For our first dozen laps in N Mode, the i30 N reveals a handling personality much more along the Golf R and Peugeot 308 GTi end of the playfulness spectrum, than Focus ST or Megane RS. 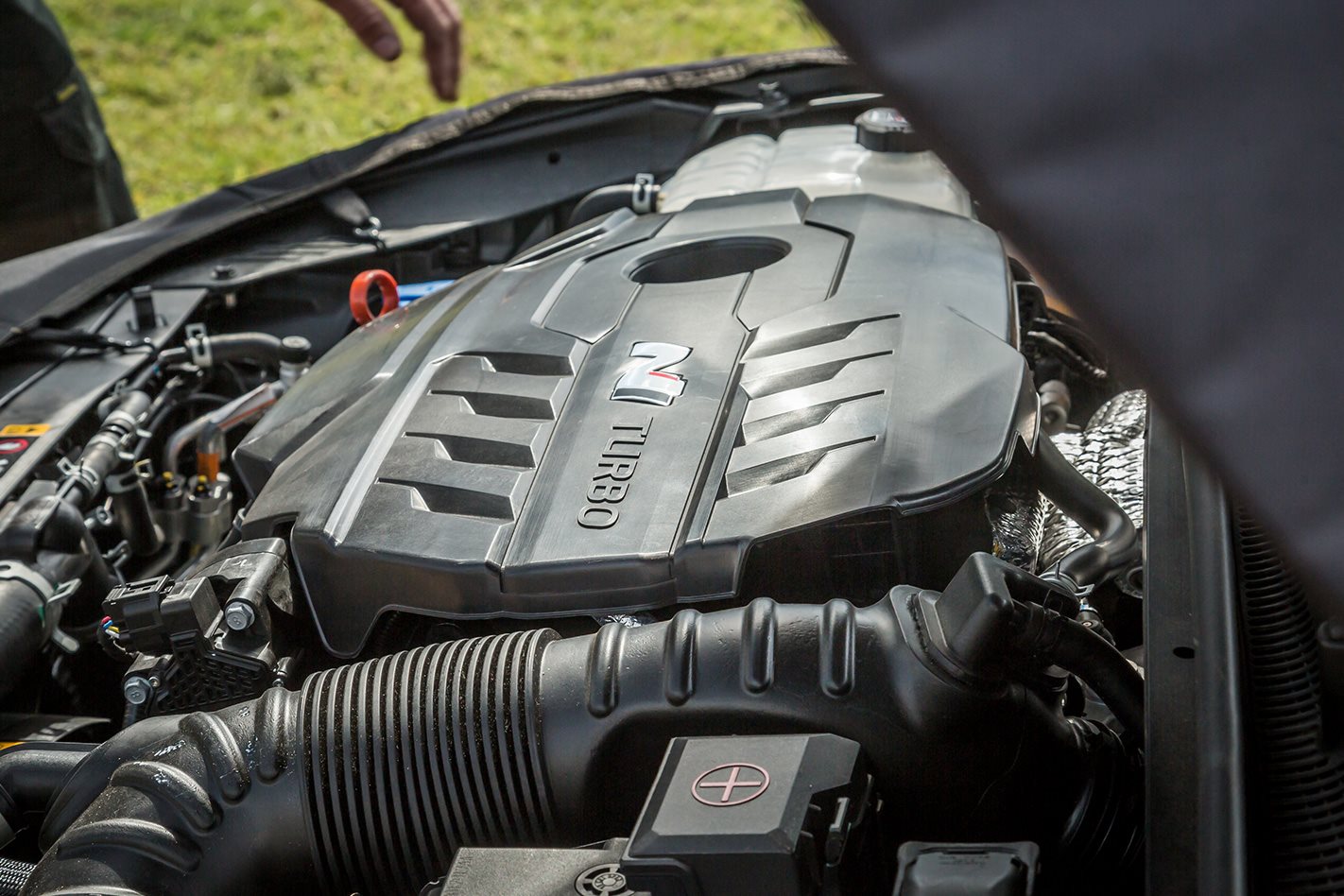 This is a very stable hot hatch at high speeds; the little brain in your right foot will be giving you the A-OK to maintain otherwise ambitious throttle openings through very fast corners.

It seems the trade-off is, front grip expires long before rear grip, and on what can sometimes be spooky tyres, Pirelli P-Zeros, attempts at provoking the rear can be more white-knuckle and something you do for the camera, rather than for fun around the back of the track, when no-one's looking. Somewhat disappointing.

We roll back into the pits. "So, how was it?" asks Biermann. We try to explain that it was more 'stable' than we were hoping.

During our chat at the Paris Motor Show last year, Biermann made the i30 N sound like it would be a hot hatch developed with more of a Toyota 86 philosophy: fun more than lap times. We fantasised over a new tail-happy, rorty and fun hot hatch entering the market. It seems we were wrong. 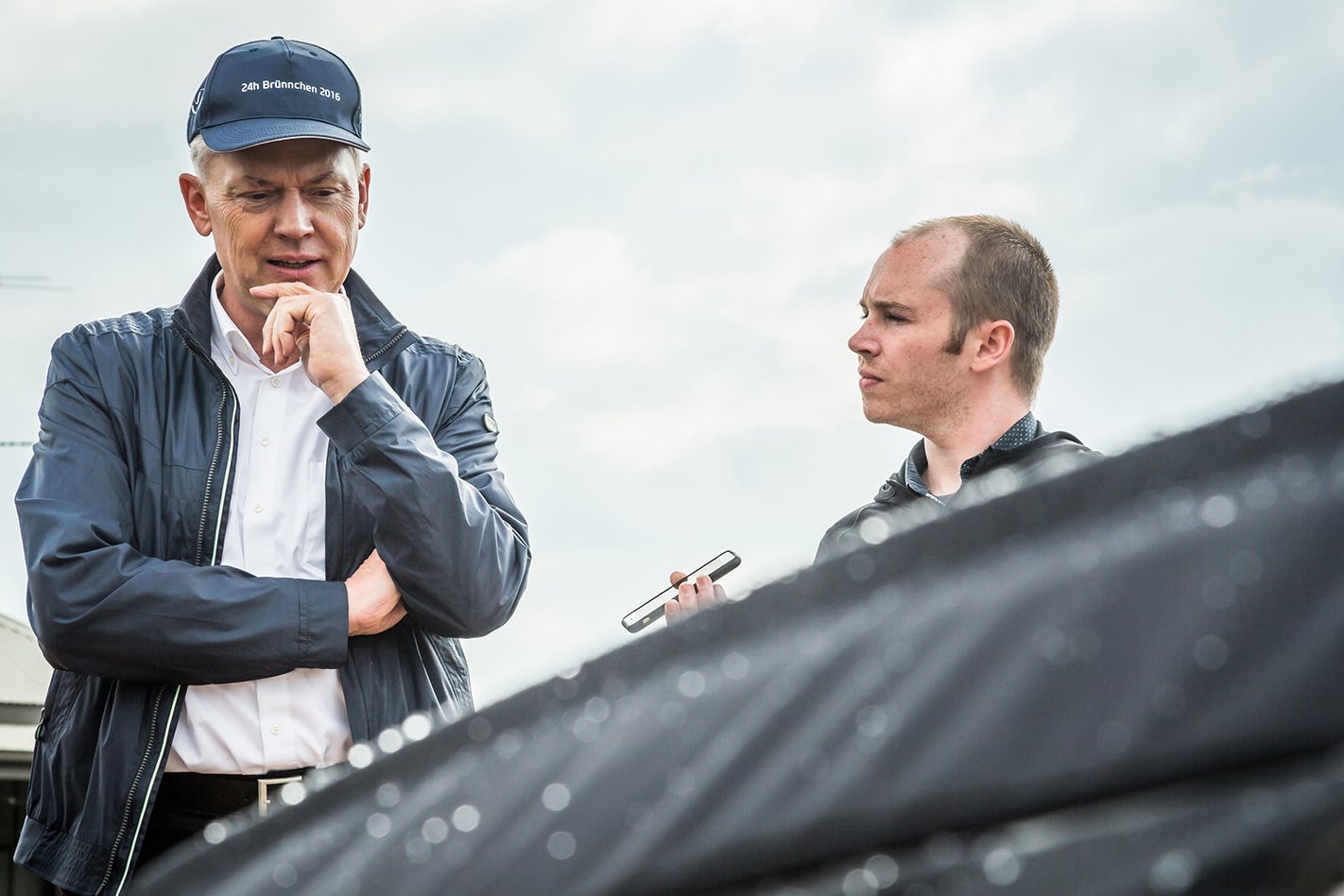 "Do you want to go out again?" asks a Hyundai person. Empty racetrack, incredibly interesting and important new hot hatch built by a former M Division boss, nothing else to do. Oh, if we must. "You should try the custom options," encourages Biermann, grinning.

Using the centre screen, I go for what I would in pretty much every car with this much customisation: soft dampers, perky engine. In the i30 N's case, that also means most aggressive diff-lock and ESP half-off. It's a different car.

Suddenly, with the body shifting around on its suspension, you have a world more information about how much is left in the tyres. Confidence is way up.

Drive it hard and straight and there's a satisfying, exciting amount of bodyroll letting you know how much grip is left. Flick it into a fast corner and the now softer rear excites, encouraging steering correction – the excellent sport ESP calibration letting you have a play – all the while in a very friendly and predictable way. 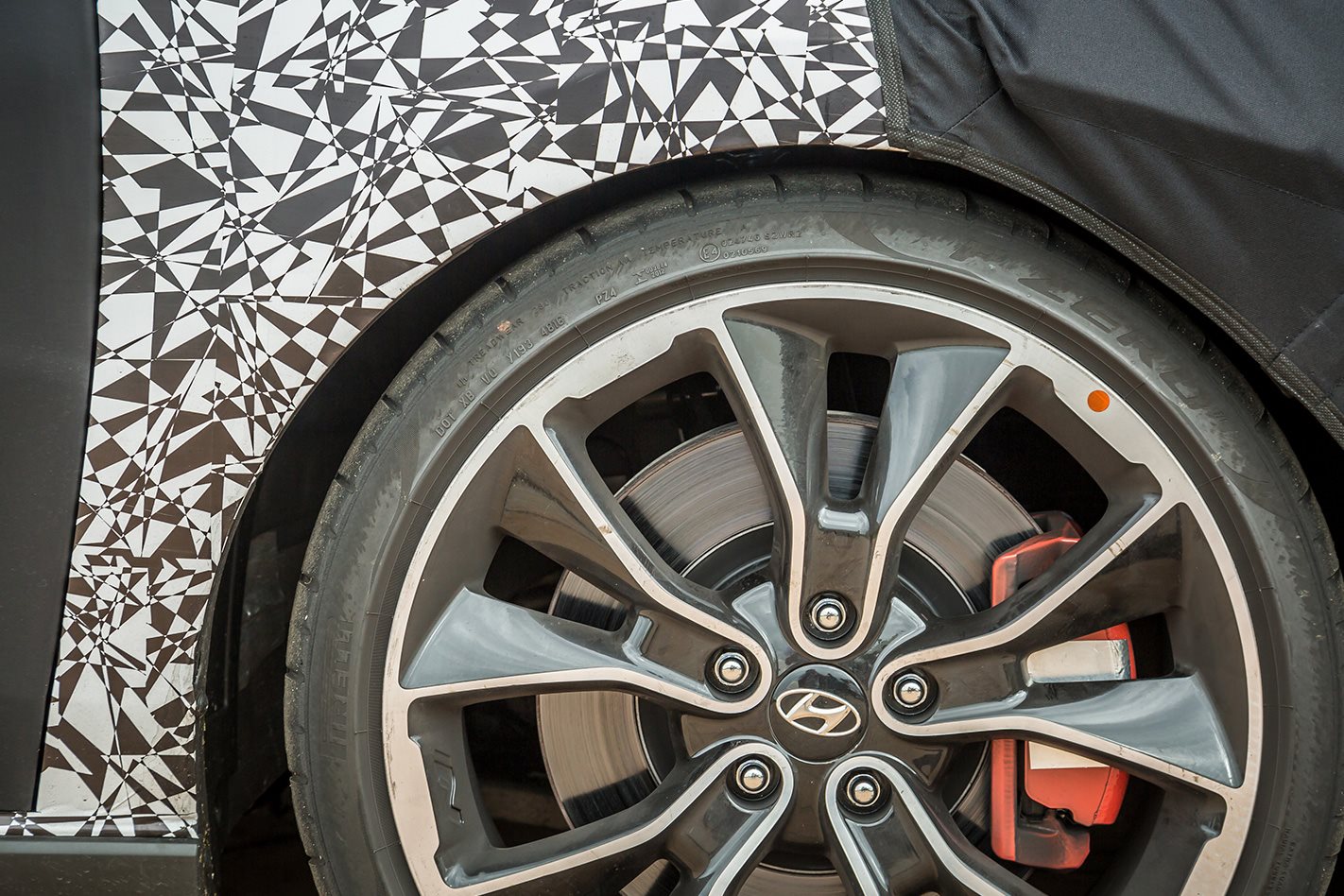 We do not want to return to pit lane. The i30 N is fun. It has substance. It feels like it was made by people who love driving.

Now, this is still a prototype, and things will change, but it's pretty much done. It's not all rosy so far – we suspect the ride will be very 'focused' and the engine does run out of breath a little in the upper revs.

We get to see what it looks like at the Frankfurt Motor Show. But it's incredibly promising.

It's like a slightly more playful Golf GTI Performance that sounds like a subdued Ford Focus RS, with toys and modes and buttons like you'd find in cars over $100K. Does it bring something new to the sub-$50K hot hatch table?

Absolutely. "We have a twinster all-wheel drive system in one back at Namyang in Korea as well," says Biermann, casually.

Which means there are more N-branded hot Hyundais coming. And we actually can't wait to drive them.