ALMOST everything about off-roading is harder than you think. Except getting bogged, which sure is easy, and pretty much defines “that horrible, sinking feeling”.

That’s not to say that proper four-wheel driving – not just extracting your SUV from a muddy car park on a Saturday morning after you kids’ sport of choice – is impossible, or even hugely difficult (I’ve seen blokes with beards, beer guts and body odour manage it). It’s just that it is not as easy as the TV advertising that convinced you to desire a big off-roader suggests. 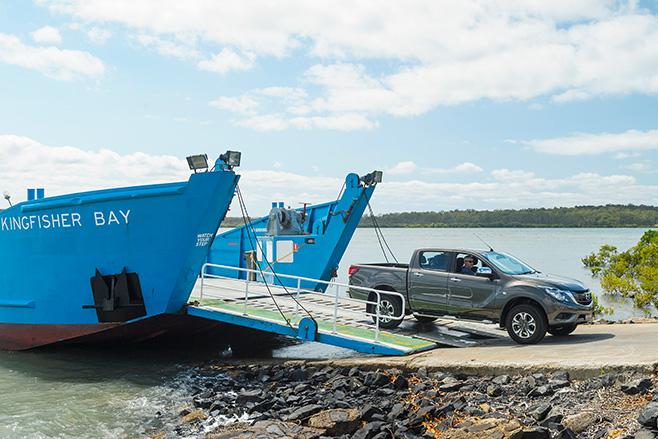 Modern SUVs, particularly serious off-roaders from companies such as Land Rover, Jeep, Toyota, Mazda and Nissan, are absurdly capable, and can turn your vehicle into a master of any terrain at the twist of a dial or flick of a switch. But if you don’t know what you’re doing, even the best machines will end up buried to their bellies, and you’ll discover how much fun it isn’t to dig your SUV out.

Unfortunately, most of us learn to drive off-road the same way, either by sitting in the driver’s seat and being yelled at by someone who believes they know everything, or by following the car in front and attempting to do what they’re doing – an approach best known as “guess work” or “stupid”. 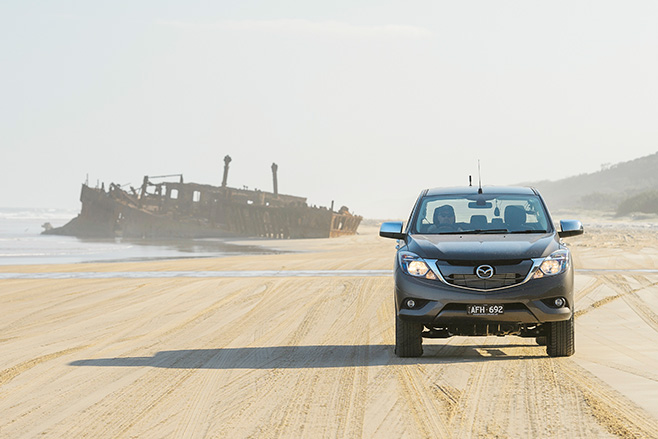 The advice you’re most likely to be given, in just about any situation, is that “more power” is the answer. Feel like you’re not going to climb that slippery hill, or clamber out of that muddy river bed? Just jam your foot on the throttle like it’s made of cockroaches, and let off-road physics sort it out.

Fortunately, I recently met a man who actually teaches people how to drive in the wild, Dave Darmody from Australian Offroad Academy, and I recommend you find someone like him. 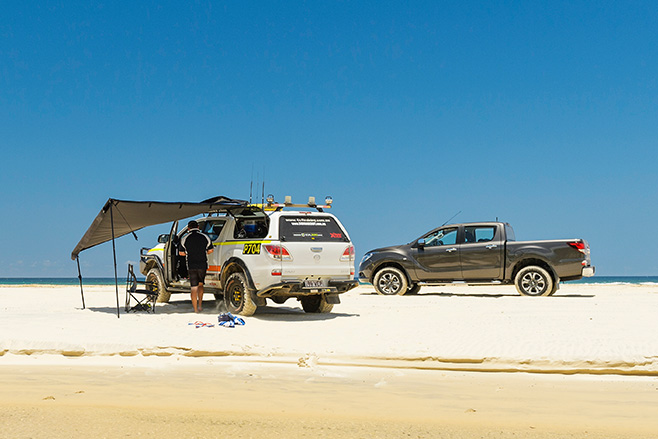 “People will tell you it’s all about momentum, but that’s just stupid – momentum is what you use when you’ve run out of skill,” Dave neatly explained.

“You need to give the suspension time to breathe, so you don’t rush it.” 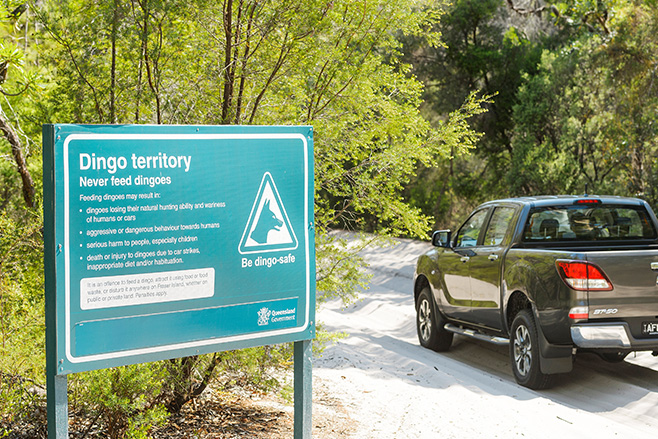 What Dave – who is the type of bloke who makes you feel like a proper, shiny-bummed city slicker, even if you’re disguised in dirty board shorts and a ripped T-shirt – explained is that going too fast on sand or loose gravel or mud gives the suspension, and your SUV’s computers that manage things like the engine, traction control and gearbox, too little time to react.

A fully compressed suspension leaves you with nowhere to go when you plough into the next bump or pothole, meaning you’ll either dig in and bog down, or cop yet another of those shunts through the spine that can make off-roading so physically demanding, particularly if you’re doing it wrong. 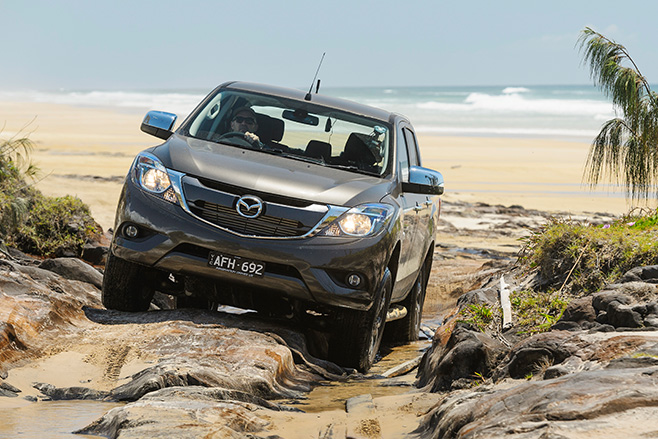 One thing you can’t be expected to know, just from watching those Don’t Hold Back ads on TV, is that you’ll need to lower your tyre pressures, and not just by a little bit, to go driving on sand or similar slippery surfaces.

Dropping your rubber to something like 22psi, as we did, means you’ll need a proper tyre pressure monitor, not just a stick and a stopwatch. The results, however, are spectacular, as the increased contact patch a lower pressure provides – as the tyre deflates and bulges out, the amount of its surface in contact with the ground increases – allows you to skim over the surface rather than dig into it.

This gives more freedom to use the throttle and keep up a bit more speed, as long as you’re driving along something smooth, like a beach. 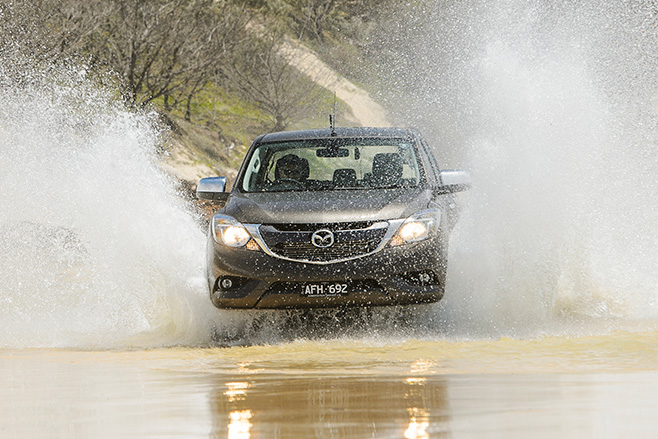 Another slightly counter-intuitive technique is turning off the traction control once you’ve lowered tire pressures. And that this is a good thing.

Traction control, which stops individual tyres from spinning and feeds drive to those with grip, is very precise and operates by measuring the rotation speed of each wheel. Different tyre pressures will change the speed at which a wheel turns, confusing the system and possibly causing it to apply the brakes, or cut power, when you least want it to. Meaning you’ll get bogged.

But fear not, because if you put some modern four-wheel-drive vehicles into low-range gearing, as you should for this kind of driving, a special form of traction control kicks in. 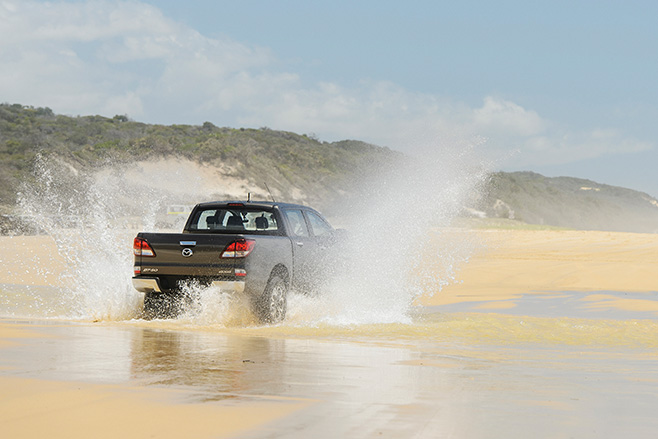 We recently tested one of these systems, under Dave’s watchful, weathered eye, on a Mazda BT-50 ute on Fraser Island, and were amazed at how good it made us look.

By measuring the amount of slip and spin at each wheel, the off-road traction control automatically works out which wheel needs your engine’s torque – colloquially known as “grunt” (you’ll need lots of torque for off-roading, which is why you should choose a diesel engine over a petrol one) – and basically pulls you up, through and out of all sorts of trouble with minimum fuss.

With your tyres adjusted and your low-range clever-dickery engaged, driving off-road can come perilously close to feeling easy, at least if you don't get too hard core. But we still managed to get bogged.