IT’S never much fun getting bogged. Even less so when you’re in a blizzard with a sports car far better suited to sunny top-down drives or twisting mountain passes.

But that’s one of the early challenges we’re facing on the inaugural Mazda Ice Academy driving the Wheels Car of the Year, the Mazda MX-5. As the name suggests, it’s all about cold weather and Mazdas – and the former is now bountiful in one of those enormous US snowstorms that shuts down airports. 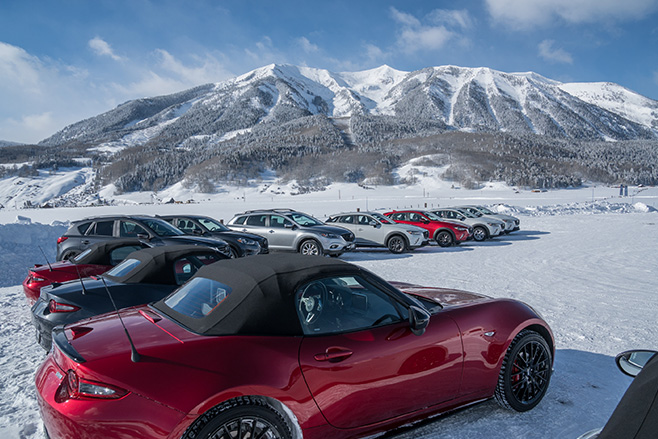 Despite days of sub-zero temps, I’m initially struggling to find any ice; it’s buried under the metre-odd of snow that has blanketed Crested Butte, Colorado, in the last couple of days.

It’s not only traction that’s an issue on the freshly laid powder; the MX-5’s low-slung belly is brushing the tops of snow peaks getting increasingly bigger as the white stuff keeps tumbling. 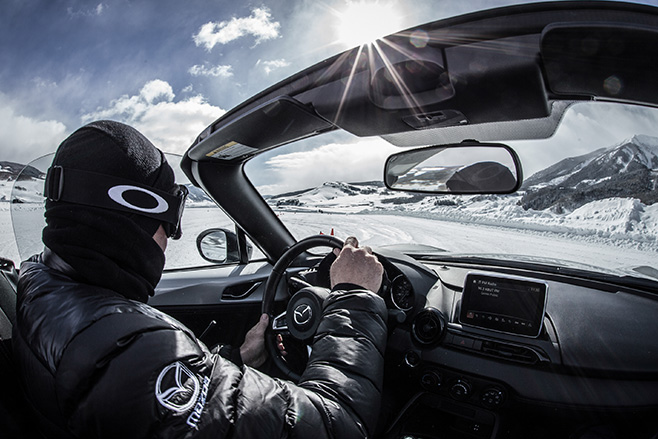 After a few external helping hands and some to-ing and fro-ing to free ourselves from the snow, we’re finally moving on a makeshift course mapped out by witches hats slowly getting buried under a blanket of white. It’s second gear everywhere, the modest 2.0-litre engine easily overcoming any semblance of traction. It’s also enormous fun.

But sliding the MX-5 is merely a sideshow to the main event. Mazda feels its all-wheel-drive system – dubbed i-Activ and fitted to the CX-3, CX-5 and upcoming CX-9 – isn’t getting the recognition it deserves, so there’s a fleet of SUVs on hand to convince us that the on-demand system is a step above much of the competition. Mazda has even brought along two prime CX-5 competitors in the form of the Subaru Forester and Honda CR-V. 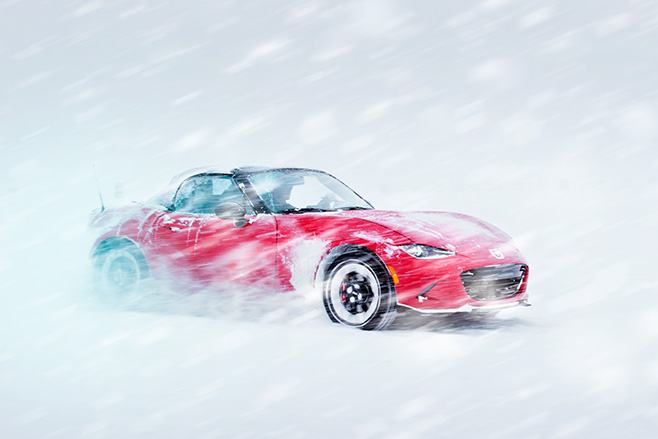 Mazda says it uses 27 sensors or systems – monitoring everything from windscreen wipers and external temperature to road speed, steering angle, g-forces and braking force – to predict when to bring all four wheels into play.

Instead of the reactive systems in many modern soft-roaders that wait for wheelspin and then react to temper it, the CX-5 is designed to anticipate – and almost instantaneously engage – when the rear wheels should assist the fronts. If it’s below-zero outside, for example, and the wipers are on, the car figures it’s probably snowing. Or if there’s a sudden change in steering load it could surmise there’s a slippery patch of water or oil on the road. With calculations and adjustments 200 times per second, the car will send drive to the rear wheels before they even get to the troublesome puddle, snow or ice. 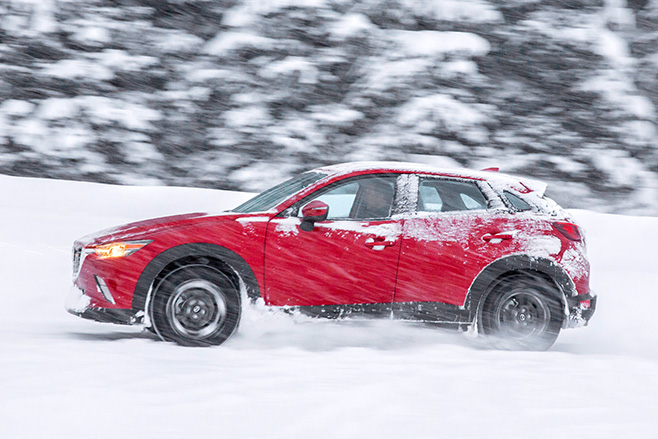 Driving the Mazda CX-5 in snow can even be a little playful, sliding its rump to help the pivot, although the stability control is ever-present to reign in too much fun.

Mazda Australia is keen to replicate the America-only Mazda Ice Academy – or parts of it – down under. So the company’s sales director, Vinesh Bhindi, is on hand to evaluate its effectiveness, not only in demonstrating some of the technologies being employed by Mazda but also how well such a course can engage with the company’s customers. 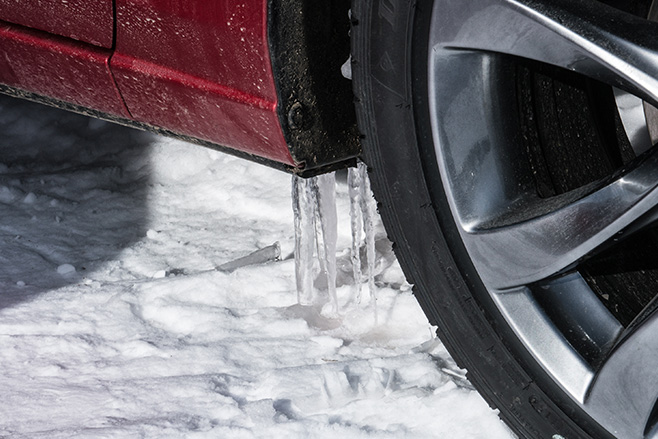 “It’s something we’re looking at embracing [for Australia],” he says, “to show the SkyActiv technology … and in particular for the SUV range in how the all-wheel-drive systems work and how they compete against what’s out there. There’s same-same but different.”

Clearly Subaru is a prime target. The Japanese rival has done a stellar job with its ‘All 4 The Driver’ campaign, to the point where its all-wheel-drive system is seen by many as one of the best available in terms of how it functions. 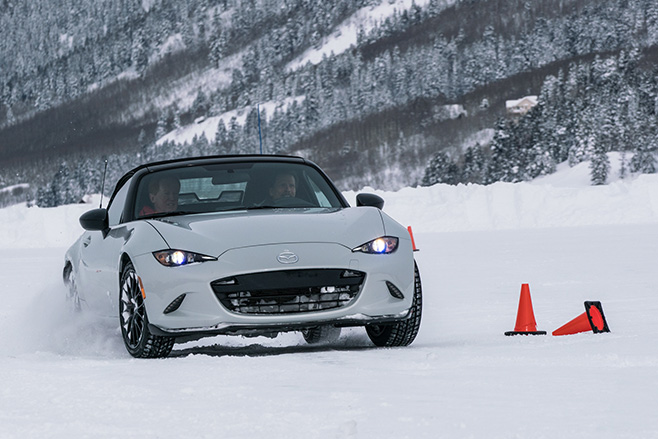 Mazda vehicle development engineer Dave Coleman admits they have ground to make up. “With all-wheel drive you’ll sail through on reputation – Subaru’s a great example of that,” says the 43-year-old Californian. “We lose a lot of sales to people wanting better four-wheel-drive systems and they’ll go to the Subaru, but really they’re walking away from a better system to go to one that they just think is better.”

Bhindi says Mazda needs to better educate car shoppers in what is an increasingly important segment of the market, with SUVs now accounting for more than one-third of sales.

“It’s more to educate consumers that Mazda has got a very advanced, sophisticated all-wheel-drive system,” he says. “Mazda is probably not known for that. We want to make sure that we educate people as much as we can.” 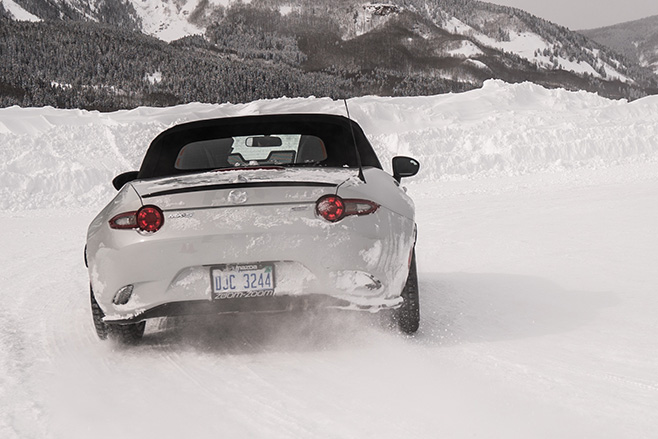 Specialised winter tyres are almost unheard of in Oz, but the Ice Academy showed how effective they are, especially under braking. Smashing the pedal from 40km/h saw the CX-3 with regular all-season tyres sailing on, the working ABS furiously. With chunkier winter tyres the stopping distance almost halved.

Bridgestone engineers say there are many factors at play, including a tread pattern designed to hold snow within the grooves rather than disperse it (as happens with water). Snow on snow apparently gives better grip than rubber on snow.

The rubber compound is super-soft (so unsuitable for regular driving because the tyres will wear out quickly) and includes a fine grit to help better ‘grab’ ice, rather than slide across it, while the tread blocks are quite angular and sharp on the edges, to bite into the snow.

Now read about the Audi Driving Experience on ice and the AMG Evolution driving experience at Phillip Island.