THE JAPANESE have been seriously left behind by the game they invented. By cars like the Ford Focus RS.

Not to take away from Ford Performance’s track day masterpiece, but cars like the Focus RS – and Mercedes-AMG A45 – are at the level the Subaru WRX STI and Mitsubishi Lancer Evolution would be, if only Subaru and Mitsubishi hadn’t turned the development taps to a trickle or, in the sad case of the Evo, off altogether.

In its press kit for the Focus RS, Ford talks at length about its innovative all-wheel drive system. A computer, via multiple sensors, detects available grip and adjusts the torque split front-to-rear and left-to-right, 100 times per second, for an eerie agility behind the wheel. 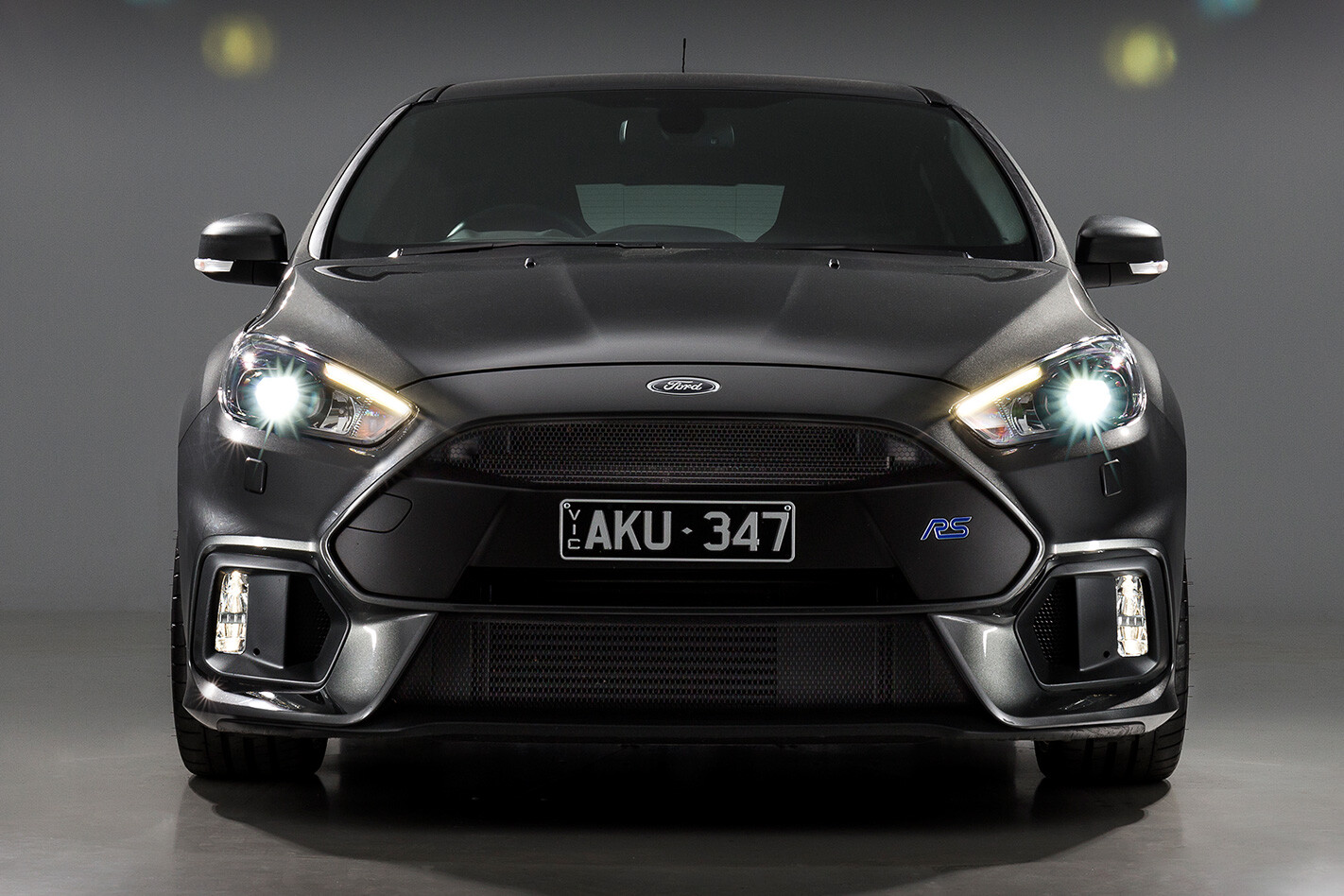 And then there’s also the ability to almost stamp the throttle with your arms crossed over in lock, in a tight turn, for the car to not only not get upset, but to nod at your request, pivot and catapult itself out in ways reminiscent of Mitsubishi’s game-changing, when first introduced, Active Yaw Control.

Of course, in 2017, the Focus RS takes things a step further with modern brake torque vectoring working in parallel with the mechanical systems; and an all-wheel drive system that overspeeds the rear axle by 2 per cent for even more eagerness to turn.

It was this crushingly effective all-wheel drive system, an incredible price of $50,990, and scoring first-place rankings amongst most judges of all 16 cars, that cemented first place outright for the Ford Focus RS at Bang For Your Bucks 2017. 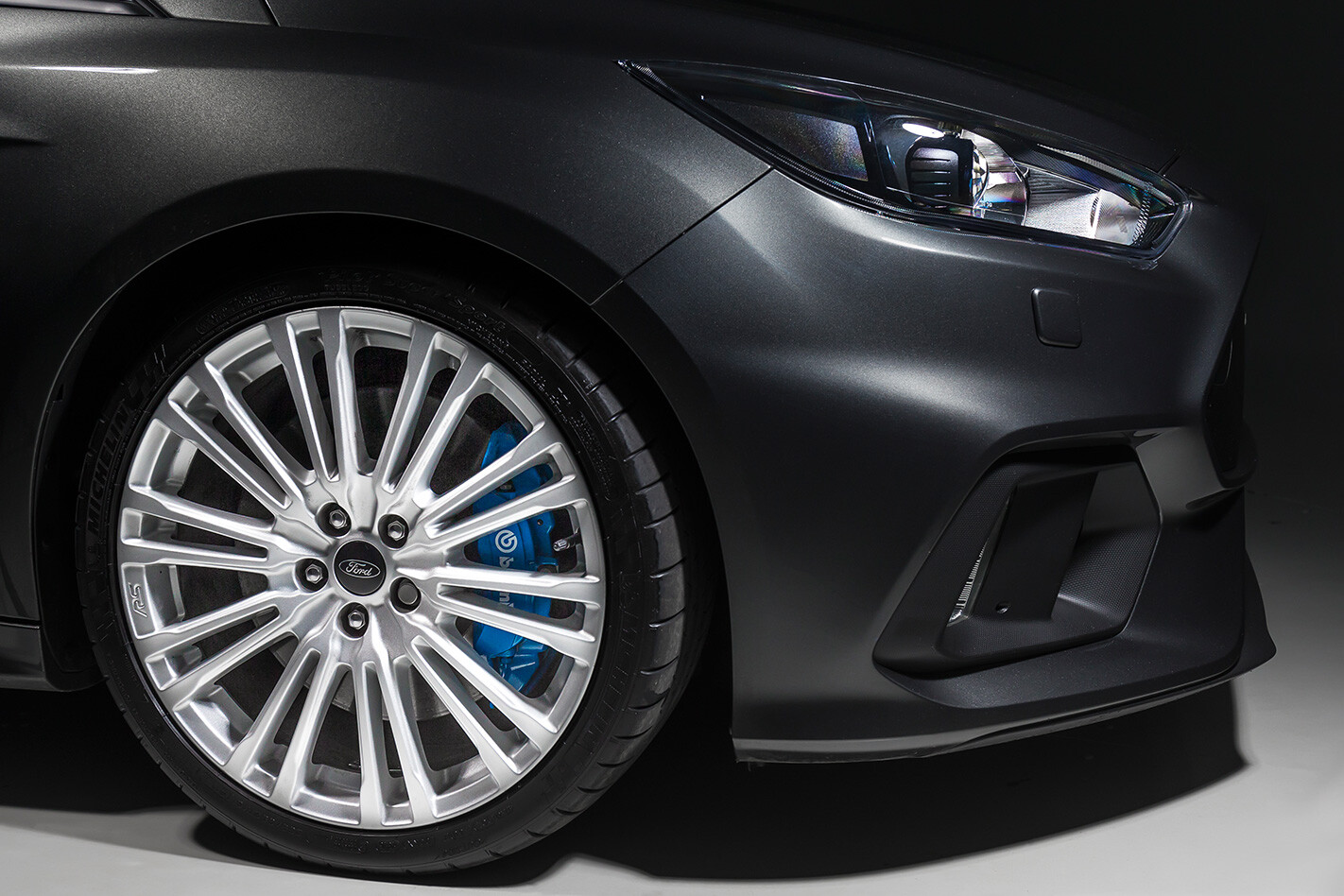 Or pinching the prized trophy off Volkswagen – which won last year with the Polo GTI – and putting it back in the cabinet before the dust could even fill in the spot where it used to sit, given Ford’s two dominant wins of this event with the Fiesta ST in 2014 and 2015.

Not only has the Focus RS now won the event at MOTOR – the one that’s 80 per cent based on hard performance and pricing data – but it comes after it finished an incredible third at the strongest-ever Performance Car of the Year last year, wedged between a Ferrari 488 GTB and BMW M2, and beating cars like the beguiling Lamborghini Huracan LP580-2 and Audi R8 V10 Plus.

From an outright perspective, the Focus RS wasn’t especially fast in a straight line at Bang For Your Bucks 2017. That’s to speak in relative terms, of course, the Focus RS coming in fifth overall for the 0-100km/h sprint, behind the AMG A45, the M140i, S4 and SS-V Redline Ute. 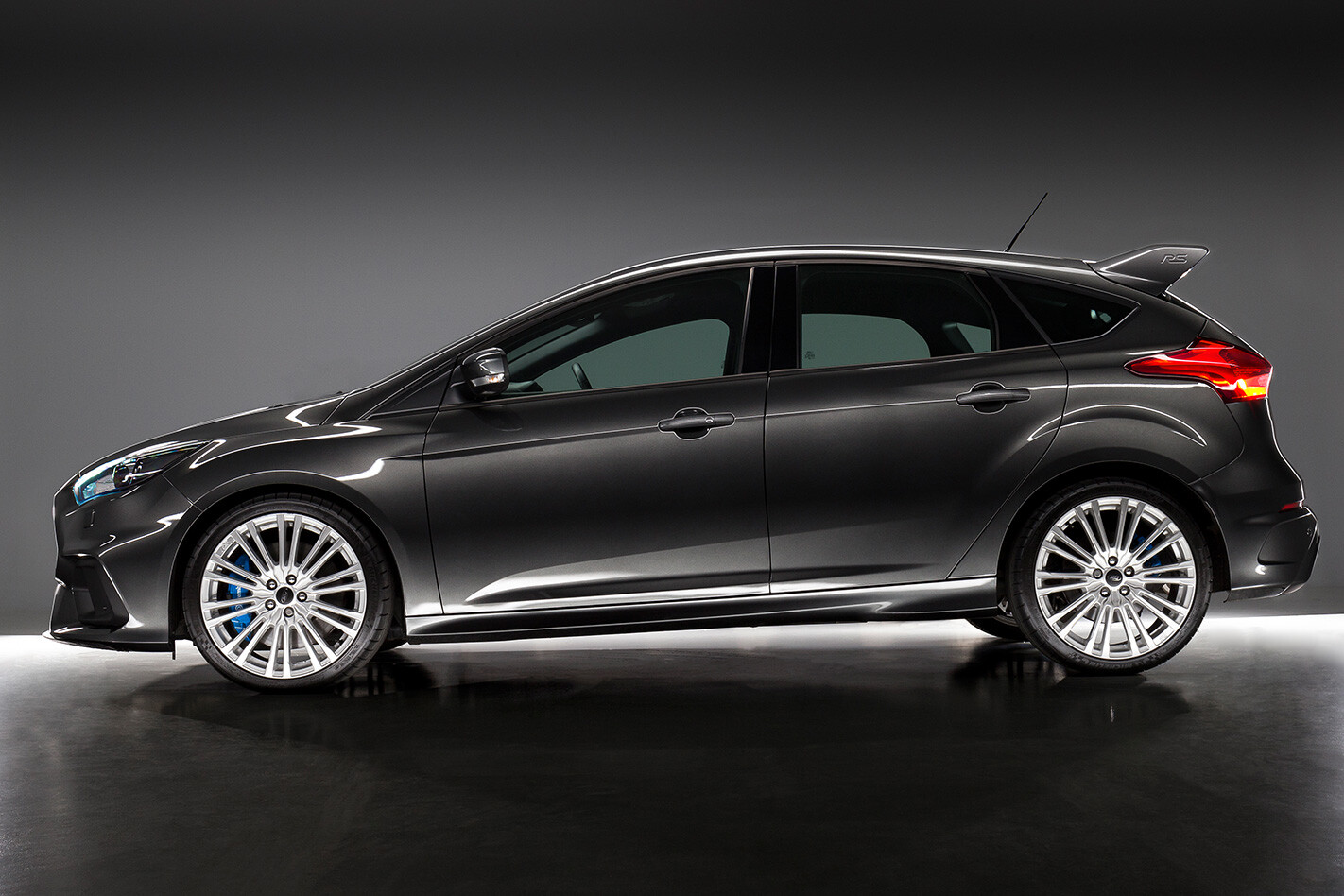 And it slipped to sixth across 400m, the long-legged base SS Ute – last month’s $0-$50K winner – reeling the rorty little Focus in. It didn’t do particularly amazing in any of the other straight-line tests, but still, with a 5.06sec 0-100km/h and 13.31sec quarter, you couldn’t accuse it of lacking snot.

Instead, the numbers testified to the brilliance of that drivetrain with the fastest apex speeds of all 16 cars. Well, if you disregard the somewhat anomalous Abarth 124 Spider, which tore through Turn 4 at an inexplicably fast 97.9km/h – the fastest car, through this corner, of the entire event.

Now, you might be reading all this and thinking, fair dinkum, the Focus RS sounds like a proper thing. But buckle up for a reality check, because this is one car you take the good with the bad. First, it’s a track superstar that borders on being too much of a toy for the weekday grind. 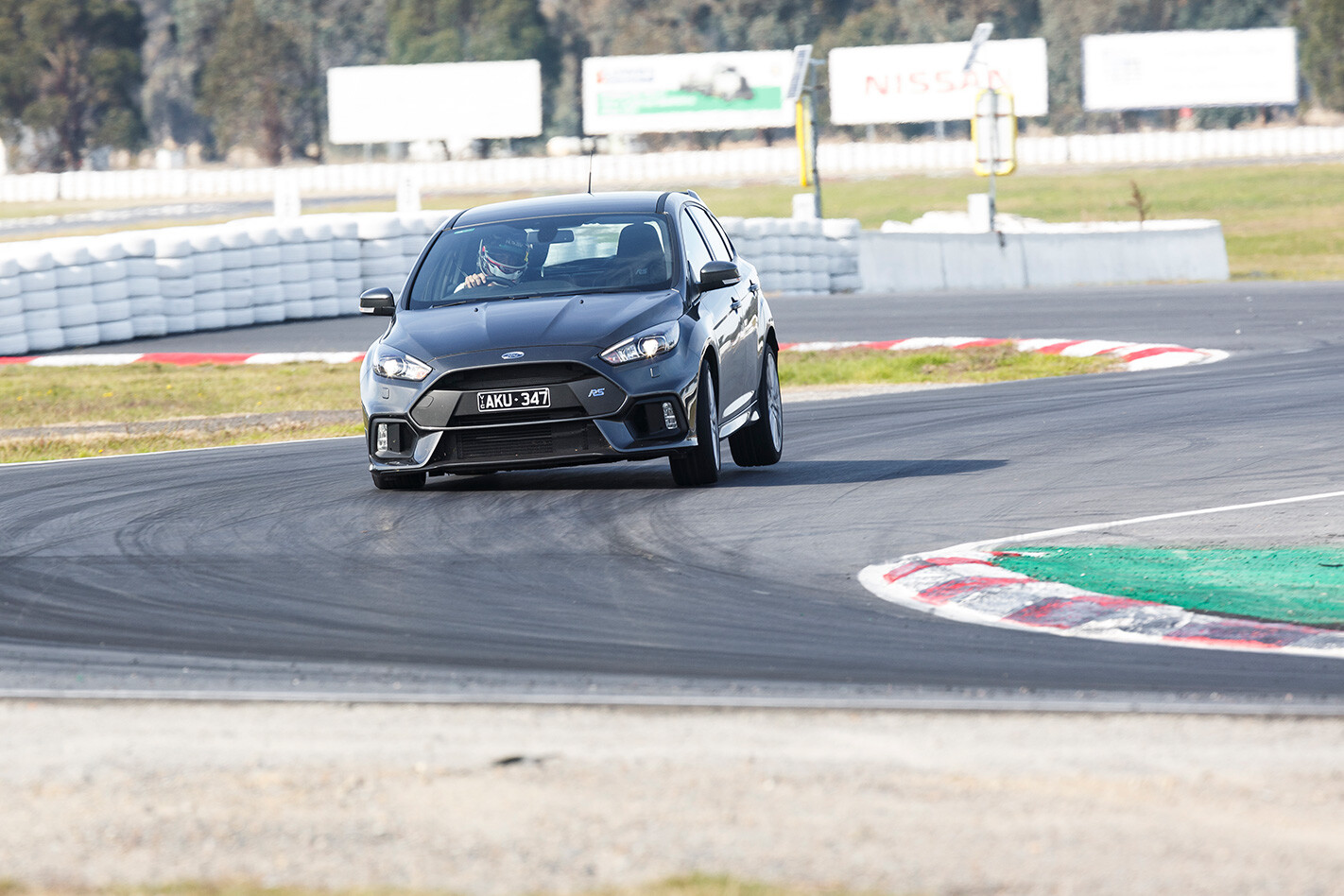 It’s fairly firm on road, so much so, if it’s your only car, you’ll do well to keep an inflatable doughnut pillow in the glovebox if there’s any possibility of an emergency interstate trip. Oh, and some cash. For your significant other’s plane ticket. Unless you were thinking of breaking up anyway.

Meanwhile, many will find the seating position too high and the gear-throw too long. The engine noise can be a little too PlayStation, although it redeems itself with the WRC-esque pops and bangs on upshifts.

The handling, too, at times can feel a little artificial, but only really when you’re trying to do your best Keiichi Tsuchiya impersonation. But these are all things that are very easy to live with to get a slice of one of the best performance cars Ford has ever made. 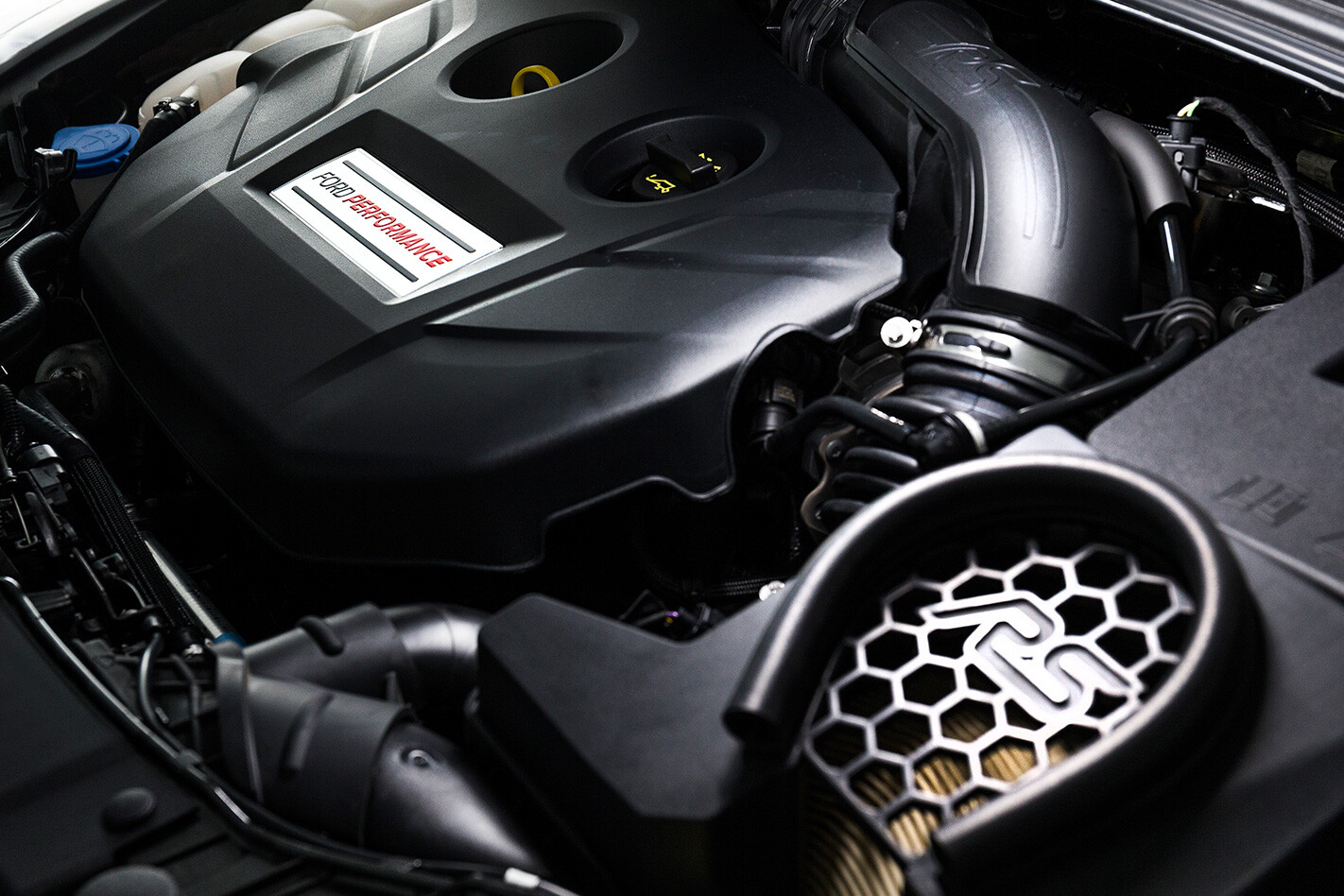 It wins Bang For Your Bucks on that spectacular price, its speed, but also the fun factor. Ford says the Focus RS is one of 20 new performance models to be made available to a global market by 2020.

And if that’s the case, the competition, at least in the value space, better lift its game – and fast.

Tricks of the Focus RS

1. The sculpted Recaro seats are standard in Australia, but actually offered as an option overseas, in place of more plush sports seats. Some Focus RS owners have reported their cars being “transformed” by custom-lowering the seat.

2. The RS feels just as built for the track as it does the street – and think about how comfortable a track car generally is. Ford doesn’t shy away from this, though. One of the recognised satnav voice commands is “find a racetrack”. And it will – the nearest.

3. If you’re going to do track days, bolt on some sticky Michelin Pilot Sport Cup 2s for which the car was partly made. Many cars fall to bits at the masses of extra grip, but not the RS – it feels utterly magic. Enough to distract you from the tyre bill.

4. The 2.3-litre EcoBoost four-cylinder is appreciably torquey from low-down, with solid mid-range and doesn’t run out of puff towards its 6800rpm redline. Normally 440Nm, 470Nm available for 15 seconds on overboost, but resets back to zero with just a lift.

MORE2017 Bang For Your Bucks