Jaws drop, eyes open and minds boggle at the foregone conclusion that wasn’t

We don’t blame you. It came close, and it looked the goods at various times during the course of PCOTY week, but when all was said and done, the much-vaunted Fezza didn’t quite get the job done.

It’s fair to say the weight of expectation sat heavily on the oddly petite, yet unbelievably contemporary silhouette of the inexplicably grey haunches of the 488. However, in some ways, the Grigio Medio hue perfectly suits the new-school ethos of the 488 GTB. It would be too easy to paint it in Scuderia Rosso – but one gets the sense that’s becoming clichéd. Yes, even for Ferrari. 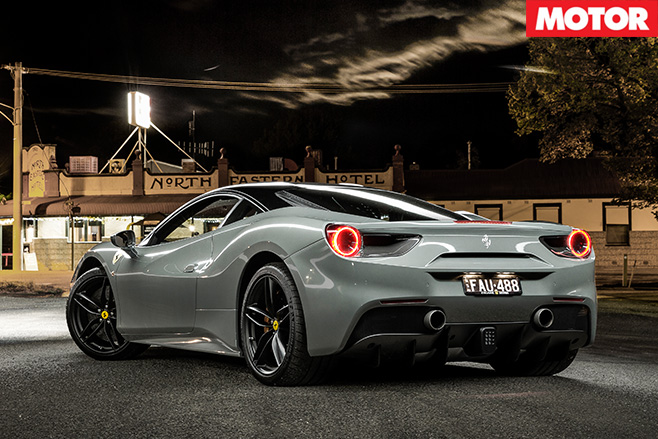 The 488 is, after all, the brand’s first mid-engine, twin-turbo V8 coupe since the F40, and the vanguard of the new age of mainline performance for the Maranello marque. The sheer breadth and depth of aero, mechanical and electronic trickery on show in this one 1475kg bundle of carbon fibre and metal is breathtaking. The 90-degree vee 3.9-litre twin-turbo V8 can, for example, predict misfires and pump oil at two different pressures.

It has a blown rear diffuser and underbody wings that change with road speed – even the dampers operate faster than thought, and are linked to the electronic diff and drivetrain.

So what happened? It might sound like a broken record, but the sheer depth of this year’s field saw some line-ball scoring across the top cars – and the line fell on the wrong side for the Ferrari. It was outpointed by a whisker in both Dynamics and Performance, and lost out when it came to more esoteric areas like Liveability. 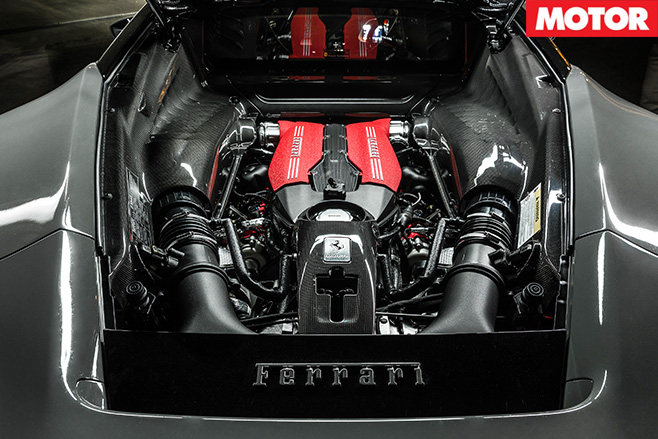 This is, after all, Performance Car of the Year, and MOTOR has always asked its winners to step up to the crease when it comes to the basics. Want the ultimate in handling and speed? Head to the track with your second-hand F1 car.

A perceived lack of value for money, too, went against the 488. It’s a tough one to quantify, but ultimately the cost of admission in this like-for-like comparison is too high. Sure, its base price of $469,988 is within $15,000 of our winner, but this example comes in at $625K… ouch.

At DECA, everyone approached the Fezza with a healthy dose of respect for its 492kW and 760Nm, but at sixth-tenths, it’s engaging and exciting in equal measure. Even for jaded old hacks, there’s a childlike delight in sliding behind the wheel of such a unique rig. 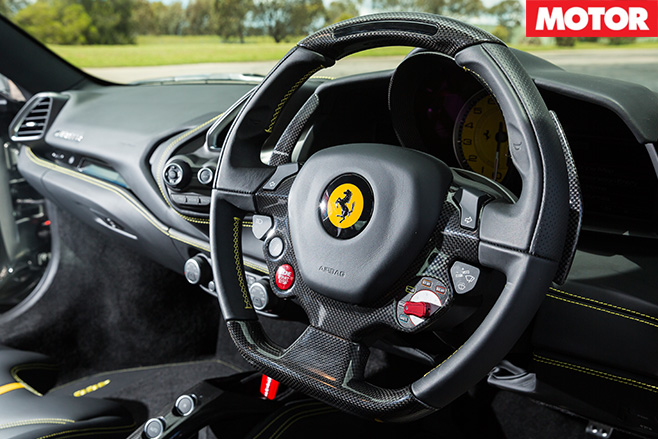 The wheel is surprisingly big underhand, and the shift lights across the top illuminate like a slot machine down the long straight. The gearbox, too… amazing. And there are fewer nicer things in the world than the grip from a brand new set of Pilot Sport Cup 2s under your fingers and butt.

Those same tyres, though, meant the Fezza was at a distinct disadvantage on a wet track – and Winton was very wet. Screwing up the courage to get to full throttle anywhere around the circuit was a real ‘meet-your-maker’ deal, and everyone was mindful of the car’s cost and the proximity of the walls. 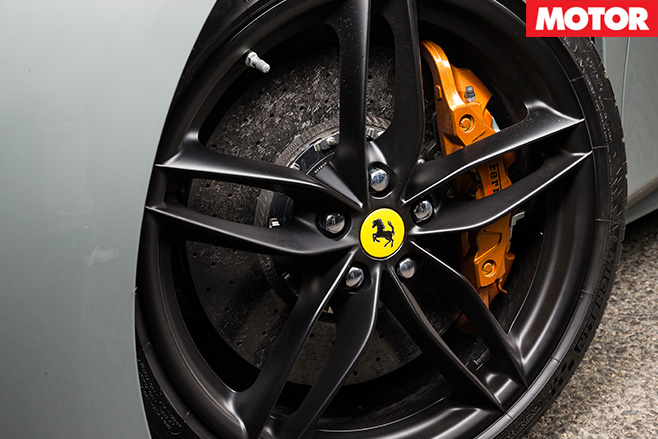 It was out on the road where the battle was closest, and the rear-drive 488 is undoubtedly a weapons-grade backroad tool. It simply eviscerates the gap between corners, it’s got prodigious ability through its front end – and the Bumpy Road mode gives the suspension tune the suppleness to really bring out the very best in an amazing chassis.

And yet, when it comes to the crunch, the Ferrari is perhaps hamstrung by its own absurdly high standards. The skin-prickling bass thump of the twin-turbo never quite reaches the emotional highs of the Ferrari 458’s screaming V8, the massively grippy rubber doesn’t give much feedback when the screws are wound up, and more front purchase wouldn’t hurt, either. It’s a special, special car. In isolation, it’s a thing of automotive beauty. 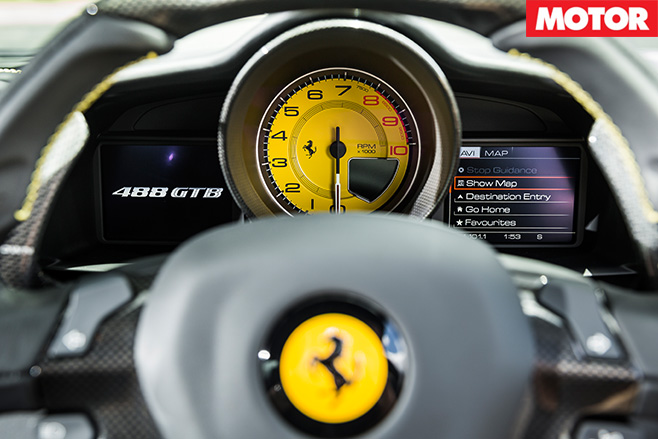 In this company, though, it came close, but not close enough, to claiming the ultimate honour.

JUDGES' RANK
DAVID MORLEY: 2nd
What’s the fuss all about?
This. This is what.
DYLAN CAMPBELL: 1st
My Performance Car of the Year. So. Expletive. Fast.
SCOTT NEWMAN: 1st
My winner. For pure driving thrills it’s unmatched.
TIM ROBSON: 6th
An absolute experience, but ultimately too edgy and expensive.
JOHN BOWE: 3rd
Super fast, too fast in fact. Good sound for a turbo car, and such presence! 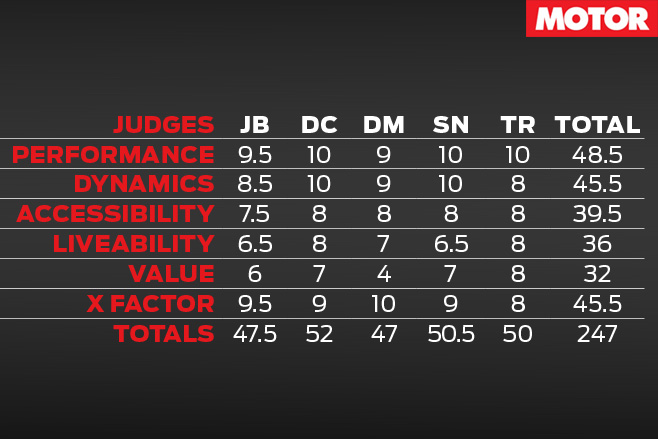 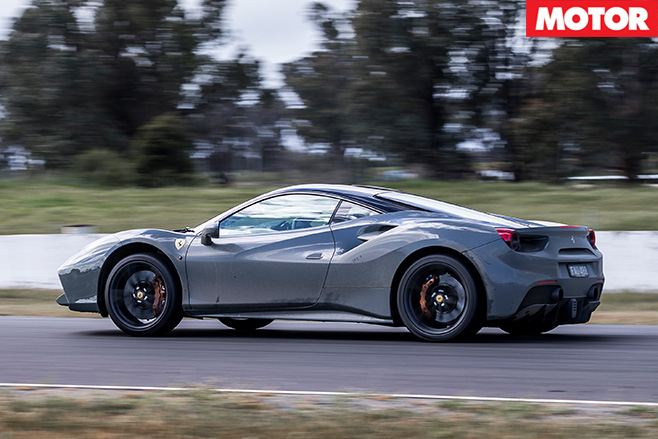 Fast, but not fast enough
The 911's all-wheel drive allowed it to produce better numbers, but in terms of pure speed the 488 was king. It's not, however, anywhere near as quick as Ferrari says it is. Maranello claims 0-100km/h in 3.0sec and 0-200km/h in 8.3sec, but while the former is feasible on a perfect surface (though forget about using the launch control, it's slow) the latter is pure fiction, the 488 hitting 200km/h in 9.6sec on its best run in our hands. Short of losing 200kg, there's no way the 488 would match its claim.