Yep, second place, Ford fans. You can uncross those fingers now – unless, of course, they’ve been crossed so long they’ll need a little surgical assistance.

Same car, really, but $22,300 less. With that kind of grunt-to-dough ratio it’s an unbelievable bargain, never mind that it can wind out more like 375kW with its transient overboost function.

And at Bang For Your Bucks the XR8 came out swinging with some serious straight-line snot. Zero to 100km/h was disposed of in a very tidy 4.87sec, and while the big Aussie sedan was pipped to triple figures by the M135i, beyond that the Bimmer ate quad Falcon exhaust pipes. 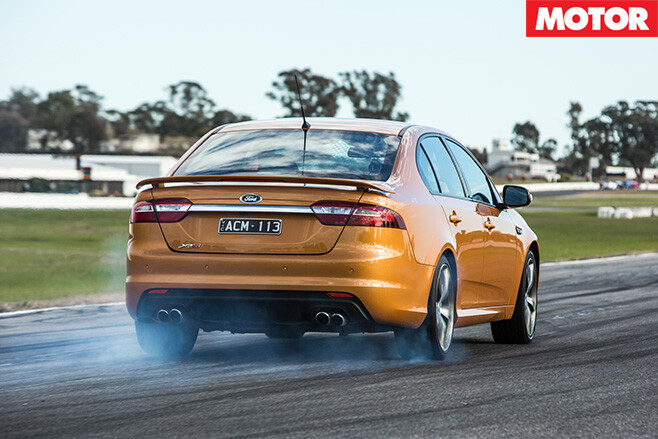 As for, well, corners, unfortunately it’s not quite the talented apex dissector as it is the quarter mile hero. In its class, the big, 1861kg XR8 came second-last for braking, and while its turn nine apex speed was third best in class, its turn five apex speed was dead last.

The subjective experience tended to back this up. Driven in some sort of behaved manner the XR8 feels a bit unsure of itself on the circuit, and for this, the judges were merciless, ranking the XR8 collectively last. 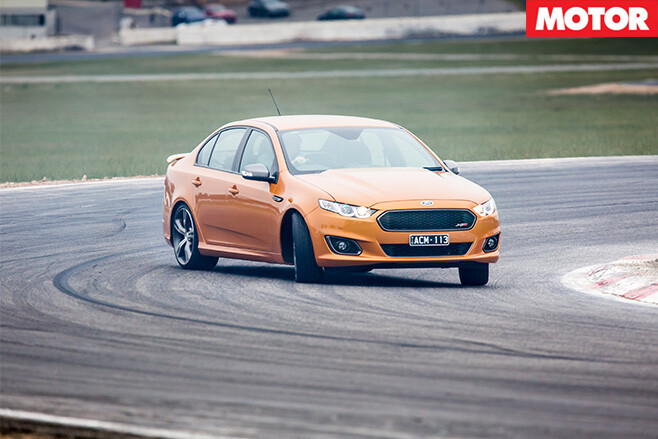 And really, you might be underwhelmed if you bought an XR8 for track days or drives to Mount Hotham. It’s not terrible, it’s just not that engaging, satisfying or particularly talented when driven in any sort of tidy, applied manner. In fact, handling-wise, the game has moved on. It’s not the XR8’s fault – where Holden coughed up to overhaul the VE’s suspension for VF, Ford just didn’t give the FG X the upgrade it deserved.

Despite its ballistic straight-line numbers, brakes and an ageing chassis let the XR8 team down, its fifth-fastest lap time relegating it to second in class.

That’s not to say the XR8 isn’t fun on a track. It’s got 335kW, two rear-driven wheels and a limited-slip diff. You don’t need to be Einstein to do the maths.

In fact, if drift angle was part of the Bang formula the XR8 might have won outright, such is its willingness to hold huge, smoky slides. It’s so friendly your nan could drift it. And when an XR8 finds itself on a track, this is the kind of activity it clearly prefers – because it’s good at it. 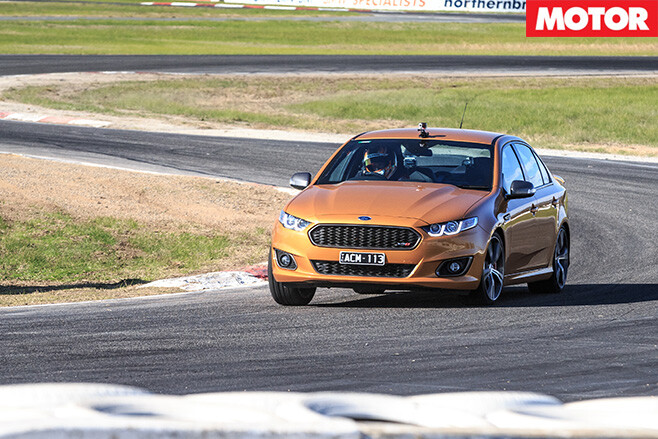 The XR8 is by no means an advanced performance tool – it’s more a four-door, five-seat hot rod. Its bellowing V8 and whining blower make a satisfying racket indeed. And it’s got grunt; if we were crowning Australia’s best-value drag car, you’d be looking at it. But in reality, Bang happens at Winton, not Willowbank.

Campbell 6th – “Great grunt and noise. But on track, drifting is really its only particular talent.”

Morley 8th – “The engine is the start, finish and end to this final Falcon chapter.”

Spinks 8th – “Drift on Demand a standard feature, but chassis finesse not available.”

Luffy 6th – “A surprise packet. The engine’s fantastic and has so much low-down torque. It almost feels like its initial damping is too stiff. Coming down the straight it’s quite bouncy over the smaller undulations, but once you load it up in a corner it’s quite soft and has that traditional heavy-front-engine rollover.”