SOME cars stand above others by advancing technology, packaging or performance. But the Citroen DS, now incredibly more than 60 years old, actually floated above them.

The DS – its name a play on deesse (goddess in French) – materialised at the Paris Salon de l’Automobile on October 5, 1955. It was immediately apparent to the stunned audience that here was a car ahead of its time. By the end of the show, 12,000 of them had placed orders. 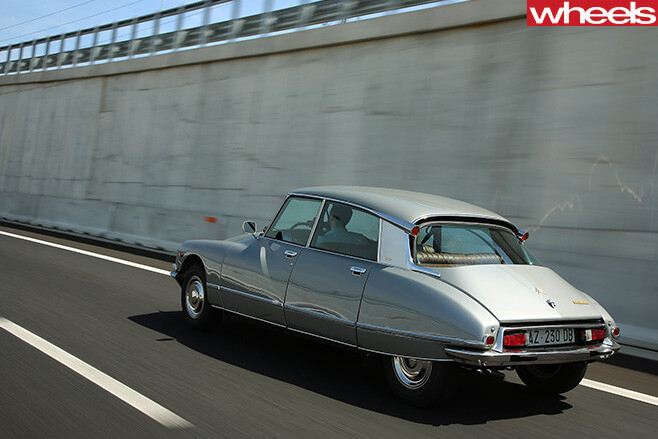 The styling alone, by Citroen veteran Flaminio Bertoni, was enough to set the new DS19 (and base-spec ID19) apart forever.

The DS’s domed floorpan, concealed air inlets, faired rear wheels, tapered shape and semi-flush side glass contributed to a Cd of 0.34, which was not regularly matched by mainstream sedans until the 1980s. Around its longitudinal engine, with gearbox in front (a carryover from the Traction Avant) driving the front wheels, the DS’s steel monocoque frame incorporated a tailored crumple zone. The use of mixed body materials – aluminium bonnet, new-fangled fibreglass roof – was daring stuff. But for innovation, the highlight was hydro-pneumatic suspension, invented by self-taught mechanic Paul Mages. Ride comfort and roadholding were almost out of this planet. 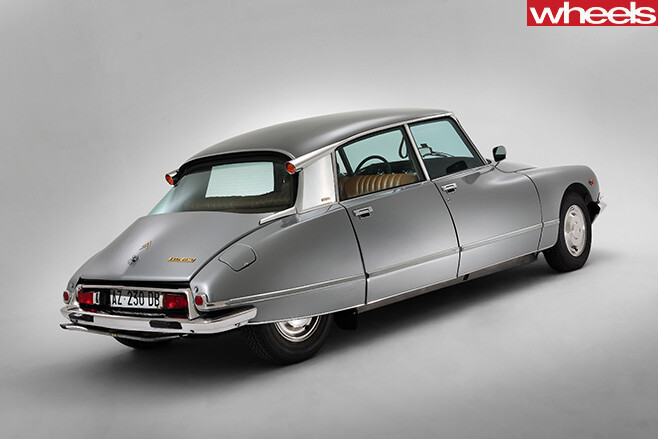 The first DS was sadly underpowered and its ageing 1.9-litre engine less than reliable. Stronger and larger-capacity four-cylinder units entered the picture in 1965. Goddess-like they may have been, but these later DSs were also formidable rally cars.

The DS was restyled in 1967 by Robert Opron, who had become head of design at Citroen five years earlier. As can be seen with the car pictured here, Opron (who went on to create the SM in 1970 and the CX in 1974) gave the DS a more streamlined and innovative headlamp design, with four headlights under a smooth glass canopy. The inner high-beam set swivelled with the steering wheel, as much as 80 degrees, allowing the driver to ‘see around corners’, while the outboard low-beam units were self-levelling. For all the DS’s technical advances, it was decades ahead of a time that mostly never came. No current car (besides the Citroen C5) has hydro-pneumatic suspension, nor a gearbox-first configuration, nor inboard disc brakes, nor body panels removable with one bolt.

Production of the DS and base ID, in sedan, Safari wagon and rare cabriolet forms, ran from 1955-75 and totalled 1.45 million cars. The DS’s monocoque frame, engineered by Traction Avant pioneer Andre Lefebvre, is in welded steel and designed for non-stressed, lightweight panels to be simply attached by bolts (guards) or screws (roof).

A sedan weighed around 1125kg. The Break (aka Safari) wagon, on a longer and stronger frame, seated eight; the rare and gorgeous two-door decapotable (convertible) was outsourced to Paris-based coachbuilder Henri Chapron.

The DS’s interior was like no other. The single-spoke steering wheel was meant to cushion the driver in an impact. The dash panel was a huge one-piece moulding in space-age plastic, sprouting a profusion of control stalks. Vents provided side window de-fogging. Mushroom-button brake “pedal” was another oddity. Seating, whether with front bench or buckets, was incredibly plush and interior space amazing, helped by the car’s flat floor.

The original 1911cc pushrod four was already 21 years old. Despite a new crossflow alloy head, the three-bearing design was flawed and, with 56kW at 4500rpm, underpowered. It sat longitudinally (actually, front mid-engined) with a hydraulic-shifting four-speed manual gearbox ahead. Much-improved five-bearing 1985cc (DS19 A) and 2175cc (DS21) followed in 1965, then 2347cc DS23 in ’73.

DS twice won the Monte Carlo Rally and was moral victor of the 1968 London-Sydney Marathon, taken out by a spectator car just 150km from the finish

The DS was initially to have been powered by an air-cooled 1.8-litre flat-six by 2CV twin designer Walter Becchia, but its 48kW was inadequate

About 1400 ID19s were assembled in Oz, with local differences including an aluminium roof and rear guards, and a conventional brake pedal

Citroen confirmed in 2015 that its C5 was the last hurrah for hydro-pneumatic suspension; ironically, the new ‘DS’ sub-brand shuns it