Never mind the car; can we have the engine?

Never mind the car; can we have the engine?

First published in the November 2011 issue of Wheels magazine, Australia’s most experienced and most trusted car magazine since 1953.

IS FORD Australia playing funny buggers with us? It’s been more than 12 months since the Falcon XR8 disappeared, its venerable cast-iron-block 5.4-litre V8 unable to keep up with emissions regulations, and there’s still no sign of a replacement.

Most Aussies assumed the Ford Mustang’s naturally-aspirated Coyote V8 would appear in the Falcon, but Ford Oz dogmatically declined to confirm or deny this. Fast-forward to mid-2011 and Ford marketing boss David Katich hints that the XR8 could be set for a return. That’s great and all, but the time for words has passed. Australia has only so much patience for a company that killed off the V8 once already. 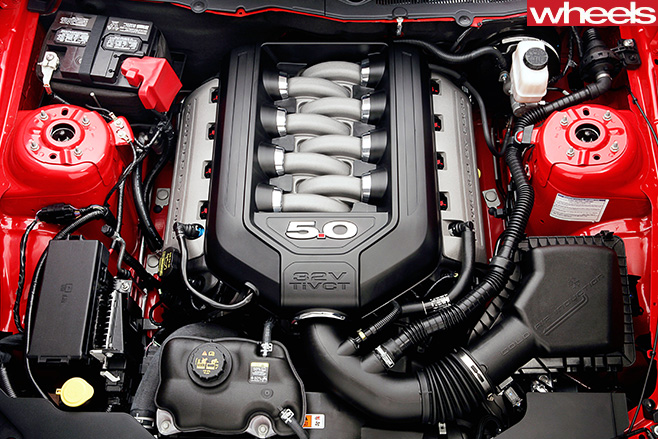 Well, here’s some free advice for Ford Australia. Send someone to America to buy a Mustang GT. Bring it back here, save the engine and throw the rest away, then put the bloody thing into a Falcon. Voila! The Mustang’s 302-cube V8 is identical to the supercharged V8 under the FPV’s bonnet, sans blower, so we know it fits. And, after sampling the Mustang GT on American roads, we also know we want it. In a Falcon. Now.

With many kays in FPV’s blown Coyotes under our belts, we wondered what a naturally-aspirated version would drive like. Well, it was worth the wait: the engine is an absolute cracker.

Raw, powerful and full of presence – its vigorous, free-revving nature alone makes you smile. It gets going without hesitation, accelerating hard from standstill since there’s no Eaton supercharger to spool up. Mid-range pull is strong, and refuses to tail off as the revs near the engine’s 7000rpm limit. There’s an immediacy of throttle response that puts Australia’s force-fed FPVs to shame, and makes playing with rear-wheel traction an intimate affair. The engine note is equally as good; deep and gravelly yet with that metallic overtone that sends sound level meters rocketing past Australia’s strict 88dB limit. 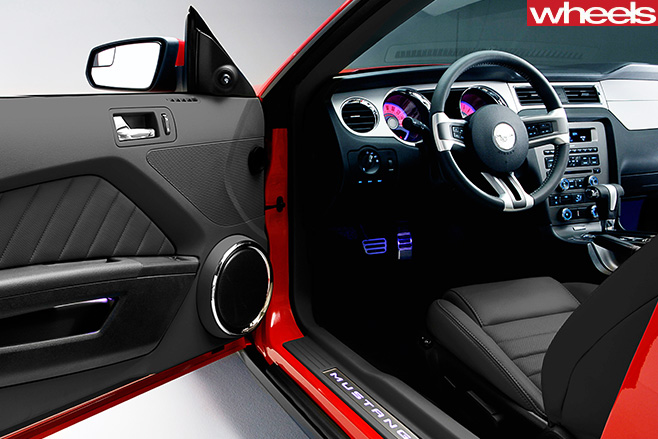 As fast as an FPV? No, but not far behind. The Mustang’s drivetrain delivers nine-tenths of the aggression yet takes driver involvement to 11. But it’s a bittersweet pleasure, knowing that Ford has a brilliant V8 in its cupboard yet Australians are unlikely to ever sample it, especially with the Falcon possibly going FWD from 2016.

Would the Boss 302’s visceral aggression translate to the Falcon? It’s an interesting question. The 1620kg Mustang is almost 200kg lighter, and

US noise regulations are less strict, so the engine’s adrenaline peaks would be blunted. But there’s more than enough exhilaration to survive the translation. 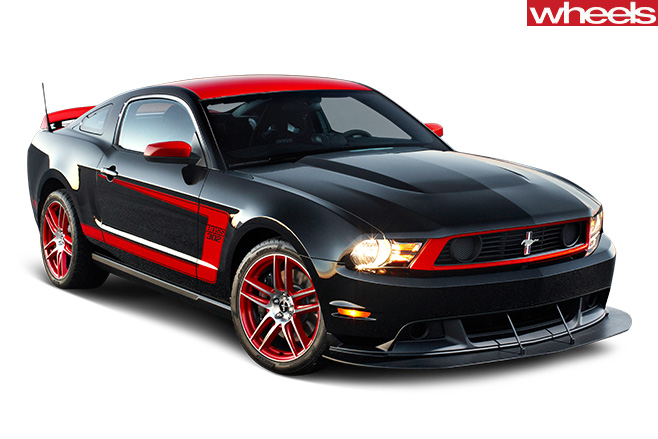 The Mustang Boss 302 is an old-school ‘club sport’ that sits above the Mustang GT. The engine is 24kW up on the standard 307kW, and revs to 7500rpm (up 500) thanks to forged internals, a lighter valvetrain and more aggressive camshaft profile. New intake and exhaust liberate more of the visceral V8 growl. Drivers can select one of three electric steering levels, which Ford says changes feedback and weighting, though the ratio doesn’t change. Brakes are 355mm Brembos up front with four-pot calipers, the biggest in the Mustang option catalogue. The Boss 302 has stiffer springs and adjustable dampers, and sits 11mm lower at the front, 1mm lower at the back. The struts adjust via tower-top screws; said to save weight over an electronic adjustment system.

The original pony car turns 50 in 2014, around the same time the sixth-generation Mustang is due. Ford Australia’s best chance of retaining a rear-drive Falcon beyond 2015 is to leverage the next Mustang’s architecture.