Ford’s history with the Wheels Car of the Year awards was always a bit up and down. But in 2002, it reached new heights

Ford’s history with the Wheels Car of the Year awards was always a bit up and down. But in 2002, it reached new heights.

Wheels Car of the Year 2002 is the BA Falcon, the most eloquent ever expression of Australia's unique automotive identity. While the basics of the traditional formula remain unaltered - broad bodies, big engines, rear-drive, an emphasis on strength and toughness - the new Ford also reflects a more sophisticated and worldly outlook.

European influence is clear in the Falcon's interior design and in the flavour of its dynamics. Lift the bonnet and you'll find American drivetrain know-how and hardware. The care so obviously lavished on making many of the car's details pleasing to the senses points to Japanese-inspired notions of craftsmanship. 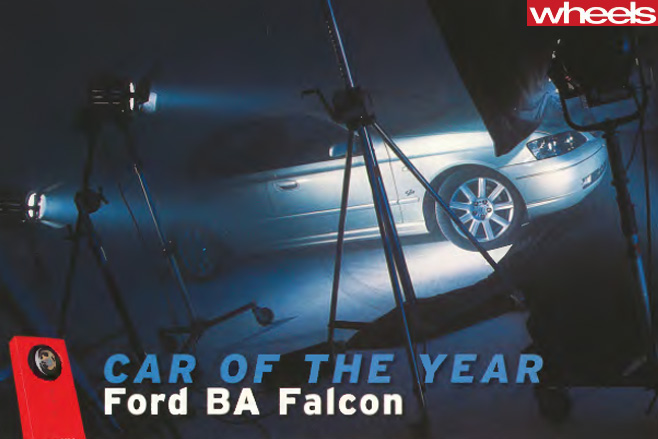 The team that created the BA Falcon is equally diverse. It's mostly Australian, of course, but key contributions came from senior designers, engineers, and executives from England, America, and Holland. Their work helped shape a new Ford Falcon that is at the same time unmistakably Australian and genuinely world class.

In four of the five Wheels COTY criteria, the BA Falcon rates superbly. Value is one of them. Nowhere else in the world can such a blend of size, safety, performance, handling, equipment, comfort and class be bought for equivalent money.

Standard Falcon equipment levels, especially in the least expensive models, are impressive for the price. And Falcon's running costs won't break the bank, either. It's almost impossible to fault the car's performance in the role for which it was designed. Spacious and refined, with excellent engines, handling, ride, steering, and brakes, BA sedans are dynamically superior to imported cars costing two, three or more times as much.

The Falcon feels right at home on all types of Australian roads, as it should. A fine, and finely adjustable, driving position makes covering long distances a pleasure rather than a pain. Sound cabin ergonomics make it a truly user-friendly car, too. 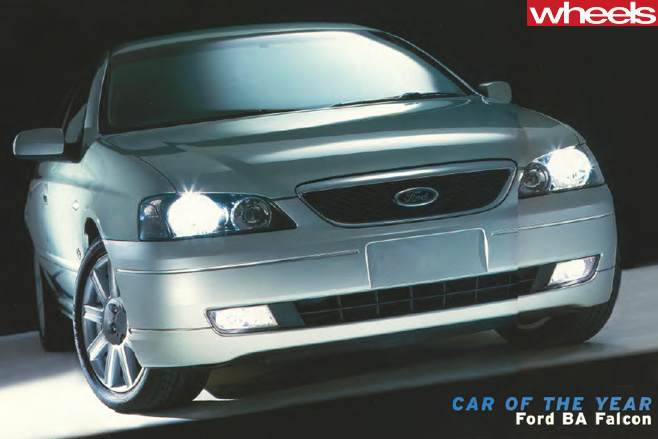 The wagon, less smooth and more noisy than the sedan, is the obvious weak link in the BA range. While technically outmoded, its rear suspension actually behaves in a quite civilised manner. Ride quality and stability are not as good as in the exemplary BA sedan, but the 11agon isn't a disgraceful drive. And it accounts for only slightly more than 20 percent of total Falcon sales.

While Ford engineers will not predict how the Falcon will perform in independent Australian New Car Assessment Program (ANCAP) crash testing, it is certain that it will do better than its predecessor. The previous model came very close to earning the same fouor-star rating as models from Mercedes, Saab and Volvo.  With BA, Ford has addressed key areas of concern.

High-technology played an important part in the BA Falcon's development process, but there's plenty of technology for customers to appreciate. The vastly improved -4.0-litre six and the superb independent rear suspension of the sedan are the the most obvious examples. It's startling to realise that the updated Falcon engine packs features, such as electronic throttle control and dual variable cam phasing not found in the engines of the other finalists. 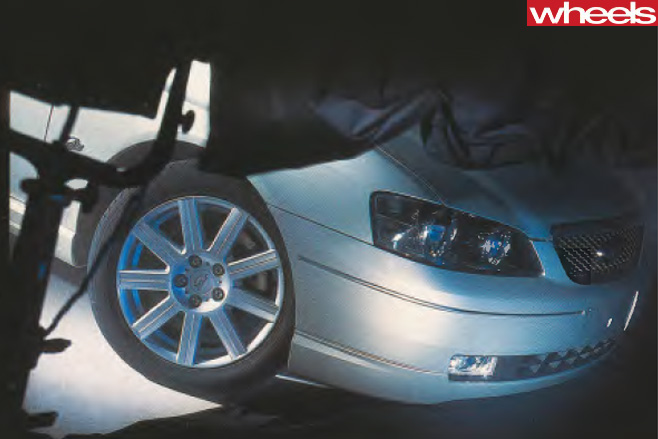 Equally high-tech is the solution Ford will use· to solve the XR6 Turbo engine shutdown experienced in hard, high-speed driving during the COTY test program. Having established the problem was due to a lack of foresight during development of the engine oil over-temperature protection strategy software written for the car's management computer, in the month following the incident, Ford engineers developed and validated an update. XR6 Turbos already in the hands of customers will have the fresh code flashed into their engine-management computers at the 3000km dealer service.

Efficiency is the only one of the COTY criteria where the BA Falcon is less than excellent. The Ford is a heavy car, and there's a price to be paid at the pumps. Official federal government fuel-consumption figures indicate a six-cylinder automatic Falcon uses 4.5 percent more fuel than a similar Holden Commodore, while the turbo six and V8 Fords deliver competitive figures. Weekly fuel costs for a Falcon will obviously be higher, but only by a negligible amount. Of greater concern is the environmental effect of the Ford's consumption. Every litre of petrol burned produces about 2.4kg of carbon dioxide, a major greenhouse gas. 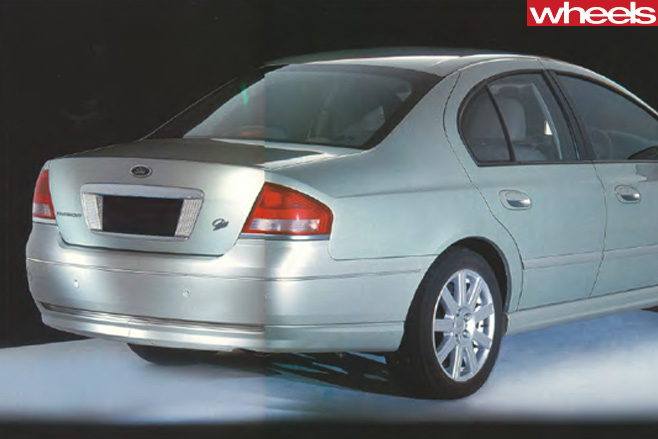 Falcon's fuel economy is not creditable, but against the costs of the modest consumption increase must be weighed the factors responsible. It burns more fuel because it delivers stronger performance, better handling, superior refinement, and improved safety. Worth having? We think so ...

No car, and no Wheels Car of the Year, is perfect. The new Falcon is no exception. But it is a Brilliant Achievement. And a very worthy winner of Australia's most coveted automotive award.

Ask Robbo what he thinks of the BA Falcon and he'll tell you straight. “It's just blown me away.''

Even after 40 years as a motoring journalist and a couple of million road-test miles, Peter Robinson's enthusiasm for cars shows no sign of waning. Now 58, Wheels' longest serving editor (February 1971 to August 1987) lives in Italy and spends his busy year globetrotting around the automotive world.

But even though he is constantly surrounded by the glamour and clamour of the international motoring industry, COTY is still the most important date on his calendar - and he's only missed one since '71. 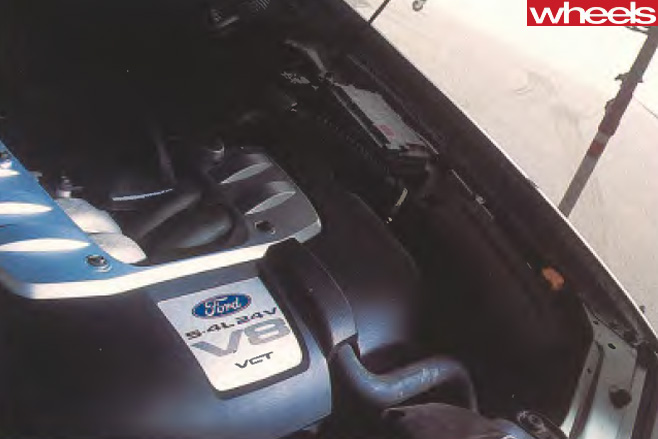 And what he gets most excited about is Falcon and Commodore. Robinson reckons they are the best value-for-money cars in the world, and this year he was anxious to find out if Ford's new BA Falcon would continue to give him bragging rights in the great automotive design centres like Detroit, London, Tokyo, and Los Angeles. He wasn't disappointed.

Here's Robbo's impassioned speech to the judges on the final night of COTY ...

"It occurs to me, having driven the BA Falcon and having been to Falcon press launches since 1963, that, with the exception of the XR, this is the first time Ford has not adopted a cynical, cost-driven model development program. Previously they would concentrate primarily on design, sometimes achieving a very high level, but to the detriment of mechanical refinement.

"I truly think, with BA, that Ford has been much more ambitious. They have had the people who fulfilled that ambition, and it's just blown me away in terms of the really fundamental engineering that has gone into the car. They haven't started with a clean sheet of paper, but they may as well have. I'm really impressed.

"And part of this revolves around COTY because Ford expected to win COTY with the XA in 1972, they expected to win with the XC in 1976, they were devastated when the XD did not win and there was a lemon on the cover of Wheels in 1979, and they were appalled when the EA didn't win. But none of them deserved to win. Then the AU came along and the same thing happened.

"The BA is an exception to all of those cars and I applaud Ford. It's about bloody time; I think they've done a splendid job with it. If you want to know how I'm going to vote, that's what I'm going to vote for because I've just told you! [Much laughter]  I feel passionate about BA. At that price, it's a world-class car."

Carey pipes in: "Its only competitors exist in America, and BA shits on them."

"It kills them!" exclaims Robbo, with the fervour of a Baptist preacher. "In England, BA Falcon money could only get you into a 2.0-litre Focus!" Hallelujah!