Andy Enright takes a look at some of the Goodwood moments that these drivers would best prefer were forgotten.

Lord March’s annual garden party at Goodwood House was held this weekend, once again attracting the great and the good of global motorsport. But for every motor racing legend that powers up the hill with otherworldly car control, there are those who get a bit overexcited at the prospect of performing in front of a crowd of thousands. Let’s take a look at some of those incidents where the longest-lasting damage was to panels and pride. 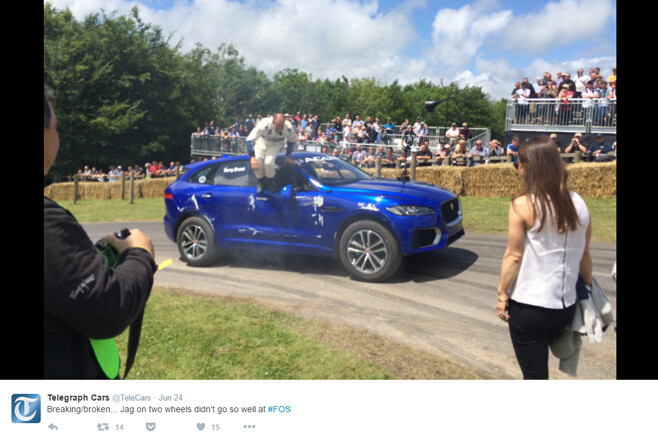 Nobody likes a show-off, right? That said, stunt driver Terry Grant is usually a reliable turn, capable of doing seemingly impossible things with cars. Driving a brand new Jaguar F-Pace on two wheels up Charlie March’s drive? No problem. That is until it crossed the finish line and promptly fell over at this year’s event, leaving Grant red-faced, Jaguar with a decidedly secondhand-looking demonstrator and the crowd guffawing into their Pimms.

Molocomb corner is always one of the more testing parts of the Goodwood hill, and it claims its fair share of exotic metal. In the 2015 event, the driver of this Lamborghini Huracan Super Trofeo discovers that deploying 456kW of V10 good stuff on grass is only going to end one way. It’s a tough job, but hay – it’s in his jeans.

Olympic track cyclist Sir Chris Hoy got to demonstrate his abilities behind the wheel of a Nissan Skyline GT-R, easily walking away with the 2014 prize for hay bale demolition.  As a man who ought to be accustomed to turning left, Hoy really had little in the way of excuses. Even Nissan’s top brass, who described Hoy as a “committed Nismo athlete” must have forgiven him, the Scotsman getting a drive at Le Mans for 2016, successfully negotiating both right and left turns at La Sarthe.

The 1994 event was forged in the white-hot crucible of ineptitude and saw many drivers fighting tooth and nail to relinquish control of their vehicles.  Watch a Jaguar XJ220 driver demonstrate some balletic understeer and Mike Wilds perform an aerial 360 in Gilles Villeneuve’s Ferrari 312. Mike suffered a broken leg in the incident but was soon back in the saddle. The Ferrari required a bit more convalescing.

Ever since the authorities at Goodwood deemed outright speed records up the hill to be a little too dangerous for the prevailing safety conditions, it’s become incumbent on drivers to instead put on a show in other ways. This driver decides that the best way of entertaining the crowd is to make a complete clot of himself in a 1989 Camel Lotus-Judd, effectively channelling the car control of a Mustang driver peeling out from Cars and Coffee. His explanation was a broken rear suspension part. It may even have been true.

Rod Millen’s Pikes Peak-winning Toyota Tacoma develops over 800 horsepower, gets to 100km/h in 1.6 seconds and here demonstrates the dangers of what chassis engineers would call ‘differential mu’. Dipping one set of wheels onto the grass of Goodwood’s narrow drive, the Tacoma goes fishtailing up the track. It’s like watching your dad play Gran Turismo. The flag marshals sensibly run away and the poor Tacoma gets a lap of honour on the back of an Iveco recovery truck.

When given the opportunity to drive Ayrton Senna’s Lotus 98T F1 car up the hill at the 2013 Festival of Speed, driver Gary Ward decided to adopt the Brazilian’s credo of win or crash, promptly oversteering the car heroically into the scenery. Perhaps the best part of this clip is not so much the crash, but the valuable contribution from Captain Obvious in the crowd in the immediate aftermath.

Wing Commander Andy Green, holder of the Land Speed Record in Thrust SSC, showed that even the ‘world’s fastest man’ could go from hero to zero in a matter of seconds. Crashing the rapid response vehicle supplied by Jaguar for the Bloodhound SSC land speed record attempt was embarrassing, but almost demolishing a TV camera tower in the process took the biscuit. Re-running the crash in his mind, Green said later: 'Jaguar are not going to be very happy.”

Soap box racing was banned for a number of years at the Goodwood hill on the grounds that it was too dangerous. Watch this video and you’ll understand why. Little to nothing in the way of crash protection, speeds of over 100km/h, inexperienced drivers and plenty of solid things to hit are a recipe for disaster. Thankfully, this crash only ended up in bruised pride and a wrecked kart, but we have to salute the driver’s commitment. If Plan A – drafting – doesn’t work, instigate Plan B: go airborne and inverted.

If you’re going to crash at Goodwood, do it with style. There’s not a lot that’s more heroic than seeing a Gumpert Apollo supercar attack Molcomb at maximum angle of drift. For about a third of a second you are Steve McQueen, the cover shot for the Festival of Speed brochure next year. An instant later, you’ve just wadded a million dollars worth of Roland Gumpert’s finest. The commentator describes it with typical British understatement as ‘a bit of a moment’. Perhaps the most touching part is the driver’s attempt to drive the car away as if nothing has happened; “Nothing to see here…”