ONLY a select few know this, but when you’re travelling fast, and we mean really fast, something unique happens to your view of the world. Click into four digits and the earth, which was flat, begins to bend, the curvature of the globe becoming the crest of a rolling hill you never see the other side of.

Only one Aussie has experienced this – Rosco McGlashan – and his single-minded pursuit of breaking the Land Speed Record (LSR) has driven him to extremes: physically, emotionally and financially.

“Dedication, determination, ability, and guts are all you need to break the land speed record – and a few dollars thrown in will be real handy,” explains the Perth-based speed freak.

Since 1963, just six men have managed to break the  LSR: Craig Breedlove, Tom Green, Art Arfons, Gary Gabelich, Richard Noble and present record holder Andy Green, who is almost the polar opposite of McGlashan (below). 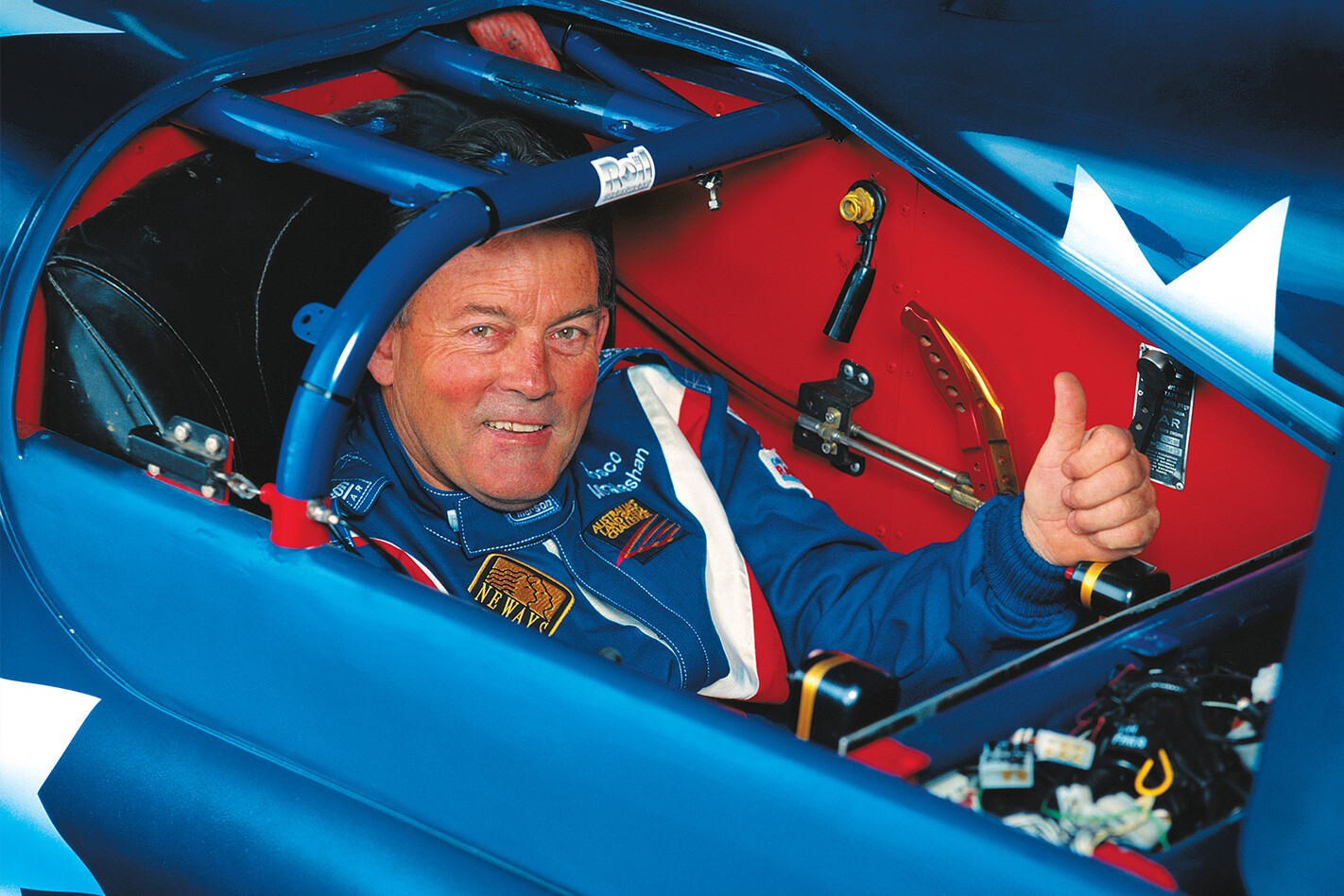 Where the Aussie is brash, straight-talking and releases his words in a rush, Green is unwaveringly calm, his clipped British tones delivered with military precision.

“It’s a popular misconception that driving a land speed record vehicle in a straight line is about anchoring the steering wheel, planting your foot to the floor and just waiting until you run out of fuel,” Green explains.

“If only it was that simple. The car moves around an awful lot – any road car moves around a little bit, and it moves around more the faster you go. When you go a lot faster, like 700mph [1127km/h] faster, the car moves around a huge amount. The wheels are now skimming across the surface, the shockwaves from going supersonic are creating uneven forces, you’ve got crosswinds, and the car is sliding all over the track.

The sensations of chasing big speeds on water are, if anything, even more eye-opening. If the Grim Reaper had a favourite sport, it’d be watching those who attempt to go faster than anyone else on a body of water.

Since 1940, some 85 percent of attempts at the record have ended in a fatality. You have the same odds of surviving Russian roulette when five of the six chambers contain a bullet, which begs the obvious question: why? Why do these renegades risk death or injury? Or, at the very least, serious emotional and financial stress? Is speed the ultimate drug that, once tasted, is a high that can never quite be replicated? The fact most of these men (and they mostly are all men) dedicate their entire lives to the pursuit, hints that this might be the case.

It’s a pertinent time to ponder the psychology behind the LSR. Right now, McGlashan and Green are gearing up for their latest tilts at the crown, on opposite sides of the globe and with very different approaches.

Where McGlashan is the embodiment of the cash-strapped Aussie underdog, Green is the organic component of Bloodhound SSC, a multi-million dollar outfit that has the backing of Rolls-Royce.

Green isn’t your typical LSR hunter. Traditionally the LSR history books have been filled with old barons with too much time on their hands, then later with hot-rodders and drag racers who haven’t been able to scratch the speed itch with combustion engines. That’s not Green. He brings the unflinching calm of a fighter pilot to the science behind his team’s 1600km/h target. Going faster than any other human on earth isn’t about getting an adrenaline fill, or bragging rights for the softly spoken Brit. Green was flying supersonic aircraft before he got a car licence, so to him it’s more of a science and physics puzzle to solve than high-stakes motorsport.

“This is not about jet engines and desert terrain, any more than Neil Armstrong walking on the moon was about spaceships. This is a human endeavour story,” he explains, acutely aware of the record’s historical significance.

Yet historical references are something that have little place in the LSR business. Every successful attempt rewrites what is possible. It’s a case of go large or go home empty handed, and McGlashan’s already established his bona fides as someone who is not going to lift if the record is in sight. If you needed additional evidence of that, he once strapped into a rocket-powered go-kart and went over 400km/h in 400m.

“I’ve driven drag cars from a really young age, but it wasn’t until I sat my arse in that rocket-powered go-kart and had a ride in that which was absolutely mind-boggling, I’ve never, ever forgotten it,” he says. “Once I had a couple of runs in the kart I thought ‘Shit, this is me!’ I would never look at driving a piston-powered car again in my life.”

McGlashan is adamant he would have claimed the LSR title in 1995 with Aussie Invader II if he hadn’t run off course due to water turning seven kilometres of the course to slush, which he hit at almost 1000km/h. The Aussie maverick obliterated the timing gear which would have measured his record-breaking run (despite it being over 180 metres away from his original course), destroyed his car, and was left with no record.

But the bitter defeat didn’t quash McGlashan’s life-long obsession. He regrouped and promptly threw his entire life savings into funding a new $4 million LSR project, dubbed Aussie Invader 5R. Rosco is single minded, with every aspect of his life focused on emulating his hero Donald Campbell and becoming the fastest man alive.

Yet at the start of 2017 it looked like McGlashan’s dream had been shattered. The Australian Taxation Office cancelled a research and development tax incentive when the paperwork was mishandled, plunging Aussie Invader into insolvency, prompting McGlashan – who, at 68, has no day job to fall back on – to call it “dead in the water”. A year later, and with the ATO’s funding returned, McGlashan claims to be poised to strap himself to the most powerful ‘car’ in the world; a 200,000-horsepower rocket-powered projectile which, once ignited, will fire across the earth faster than the speed of sound. The brutish simplicity of Aussie Invader 5R’s design reflects McGlashan’s character. He works feverishly on his beast from before sunrise until well into the night – a modern-day caricature of the eccentric rocket scientist, and this time he’ll ride it towards the horizon.

“I quit school at 12 years old to set the land speed record, and that was when Donald Campbell came across here in 1963 and started running his car at Lake Eyre in South Australia,” he tells me. “Fifty years later, I’m still doing it.

“The cops used to chase us all the time as kids. But from there I got to drive some pretty serious drag cars and had success there. It’s like an apprenticeship – it’s not like you get to just sit in a land speed car and go for it.” 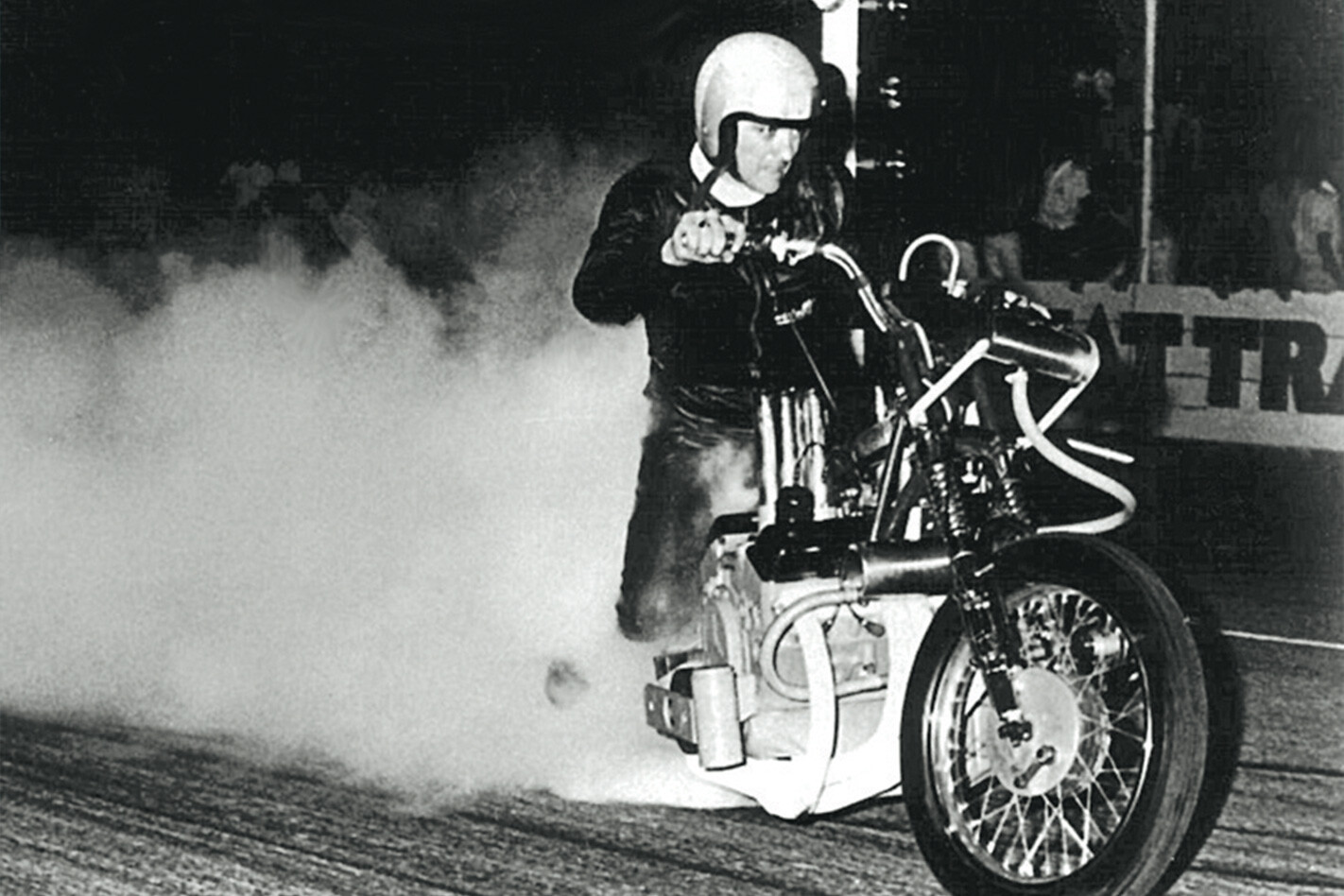 McGlashan has an indelible passion which seems to edge towards frenzied single-mindedness when discussing the details of his attempt. That 12-year-old’s dream seemingly cursing the Aussie to chase ever increasing speeds for the rest of his days. But he has confidence that it’s a case of when, not if, he will become the fastest man in history.

Yet McGlashan won’t be drawn into talking dates or even venues for his shot at the record, only to say that testing won’t begin until he’s completely satisfied the car is ready. If the Aussie can finally achieve his life’s ambition, he will become the oldest man in history to do so.

ANDY GREEN, meanwhile, may just secure the title for a second time before his late-50s. Bloodhound SSC ran on a UK airstrip in October last year with 55-year old Green at the controls as part of its preliminary jet-engine testing, and Bloodhound is now selling VIP tickets to phase-two testing in South Africa in November this year.

For a man who is taking a step into the unknown, travelling faster in a car than any other human, you’d think Andy Green would have at least some nerves simmering below his steely demeanour. Instead you’ll only find supreme faith in the team around him. His air force call sign of ‘Dead Dog’ belies an unflinching commitment to the engineering behind his new set of wheels. Work led by people like Craig Chapman, Bloodhound SSC’s chief engineer. “From an engineering point of view, the thrill comes from doing something that has never been done before. There is no safety net, no real rule book to guide you,” he explains.

If and when Bloodhound can claim the LSR, it’s unlikely you’ll see Chapman’s name in the headlines, and it won’t be his face in the record books. But even without the glory, he concedes there’s an irresistible allure to building a vehicle that so extravagantly trashes conventions. Where else do you get to build a car where the fuel pump is a V8 lifted from a Jaguar F-Type SVR?

For McGlashan, the most unsettling part of his record attempt is the rocket itself. While Bloodhound SSC utilises a hybrid system of a jet engine and rocket working in unison, the Aussie Invader is violently straightforward – light the fuse on one of the world’s most potent rockets, steer straight, and hope a record is broken.

“The scariest thing about the whole thing is the technology that is going into the rocket,” McGlashan explains. “The hardest thing to appreciate is how to horizontally fire a rocket, which traditionally they don’t like. If we dump too much oxidiser into the motor, the whole thing will explode.” 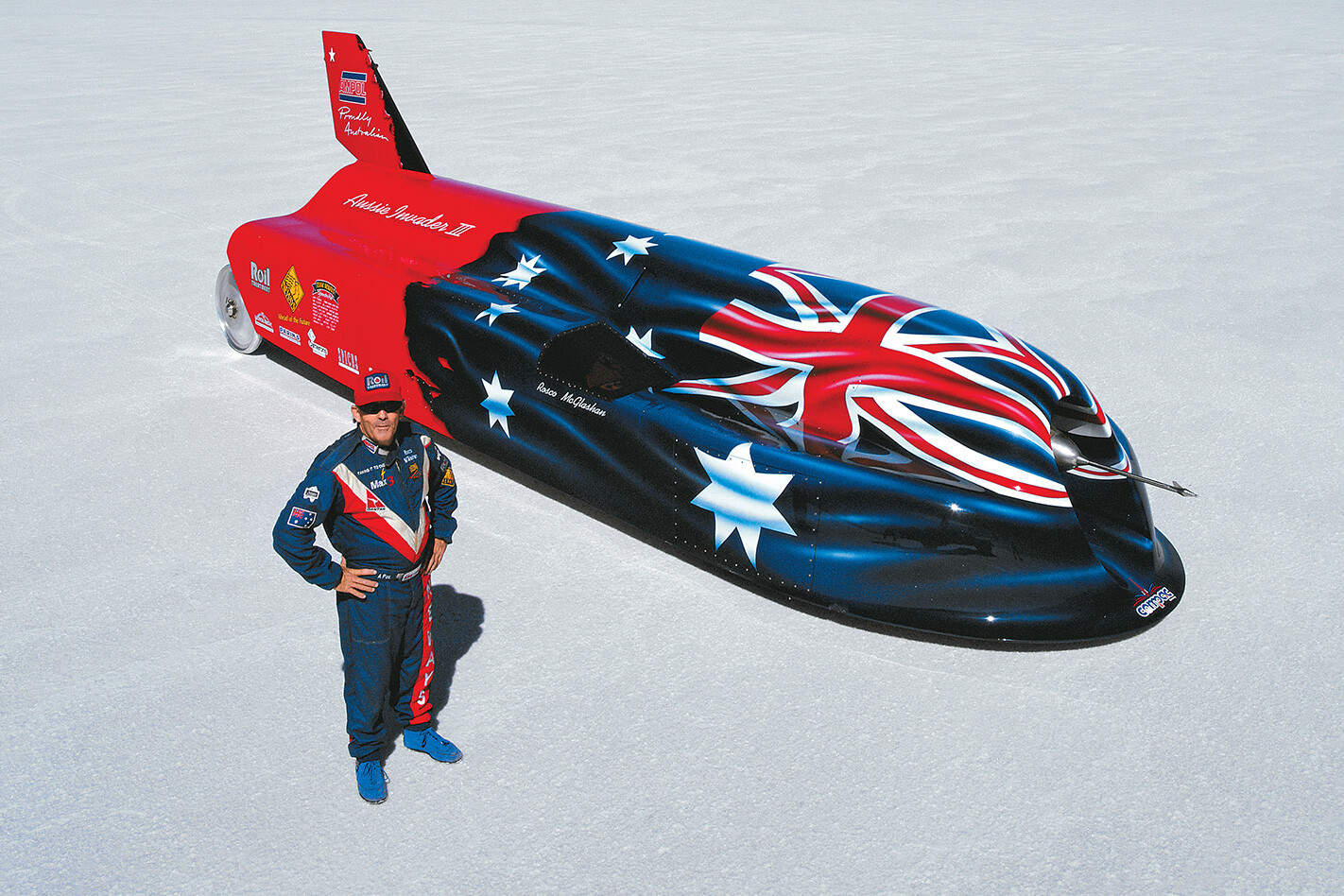 While you’d think making a car sustain 1600km/h would be the most difficult challenge, the Aussie Invader 5R team’s biggest hurdle is actually accelerating to the speed limit of your local highway from a standstill. The propulsion system is currently so powerful that if McGlashan presses ignition (and there is no throttle modulation whatsoever), the modelling suggests that the rocket will launch itself straight through the car. And him. And yet he doesn’t even entertain the prospect of fear for what he is trying to attempt. He’s currently researching ways to tow the vehicle to a speed where he can safely light the blue touch-paper.

But will it really happen? Bloodhound claims to be on schedule; a well-organised and incredibly generously funded project, with multi-million dollar sponsorship deals. McGlashan’s Aussie Invader 5R is yet to turn a wheel.

Regardless, the battle, if it is that, certainly seems a long way removed from when the Automobile Club de France declared themselves the final arbiters of outright speed records in 1902. Four years later, Fred Marriott’s Stanley Steamer became the first car to travel faster than a train, breaking the 200km/h barrier.

Now, a century later, two cars from opposite ends of the world are preparing to go faster than the bullet from some handguns. The techniques might have changed, but McGlashan and Green are cut from the same cloth as Marriott.

As Andy Green insists, it’s all about human endeavour. The rest is just hardware.