It’s taken a while, but the internal combustion engine is finally set to go into space thanks to partnership between United Launch Alliance and NASCAR’s Roush Fenway Racing team

CARS in space are nothing new. The Lunar Roving Vehicle helped Apollo Astronauts roll around the lunar landscape like the boss legends they are.

But the whole zero-gravity and lack of oxygen means an internal combustion engine has never orbited the earth – at least not a functioning one.

That is all about to change thanks to a NASCAR team, as Roush Fenway Racing teams up with the United Launch Alliance’s Integrated Vehicle Fluids (IVF) program.

The program is designed to take a rocket’s multiple fluids and systems and break it down so that just hydrogen and oxygen are needed. The secret ingredient? A good ol’ combustion engine.

Currently, rockets use a very complex combination of pressurised propellants like hydrazine and helium to operate in the vacuum of space. The additional weight of things like solar cells and batteries for electricity and water takes up a decent chunk of space in the rocket (no pun intended) and limits the distance capabilities of the vehicle.

The IVF intends to simplify this system so all those jobs can be completed by limiting fluids to just hydrogen and oxygen, and having a combustion engine do all the work. 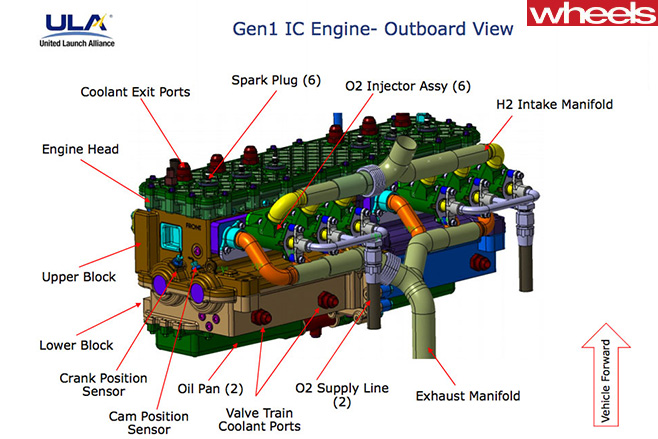 That is all the science behind it, simplified to a layman’s level. In reality, things are much more complicated than we have explained (as you would hope, this being rocket science and all).

The combustion engine won’t just mean we can get rockets to space more efficiently, it will also allow rockets to last longer, and refuel in space easier.

You would think with all that work to do, and it being developed by a NASCAR team, the engine would be worthy of its racing heritage. But actually, Roush Fenway Racing has put together a 600cc six-cylinder that puts out just 19kW. It is the smallest and least powerful engine the team makes, but probably the most important.

Despite being built to incredible aerospace tolerances, the engine is being built with off-the-shelf parts. The ignition system uses coilpacks from a 5.3-litre V8 built by GM and used in American pick-up-trucks. The same goes with the piston rods and spark plugs, which can be bought at any auto store.

The little combustion engine that could won’t get its first run in space for a couple of years yet, but it’s incredible to think how far the simple technology has come.