CREATING your perfect four-wheel drive vehicle can be a mammoth task. One that is not undertaken lightly and requires meticulous planning, recruiting the right team, skilled execution, and knowing when to say enough is enough.

It’s a task akin to scaling a mountain, but once you reach that zenith, only then can you truly enjoy the fruits of your toiling.

Sydneysider Richard Bookhouse knows the feeling of achieving his goal. He set out to build a car that can be used every day, yet still be able to take him on challenging tracks; so after a diet of a few Toyota Prados, he changed teams and climbed into a Ford Everest. 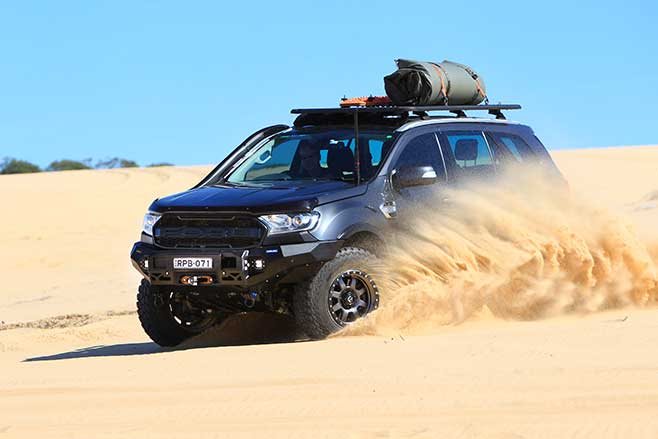 “I was bored of Prados,” says Richard. “I loved the Ranger and how it could be improved but I wanted a wagon not a ute.”

Lucky for Rich, Ford had just the answer, and most of what can be applied to a Ranger works on an Everest. The Everest shares its architecture with the Ranger utilising the Australian engineered and developed T6 platform, but riding and handling better with its Watt’s link and coil-spring equipped rear suspension which is what was adapted to the Ranger to create the Raptor.

“I like that it (the Everest) has Australian origins and I got to speak with an engineer who worked on it (the Ranger/Everest program),” says Richard. 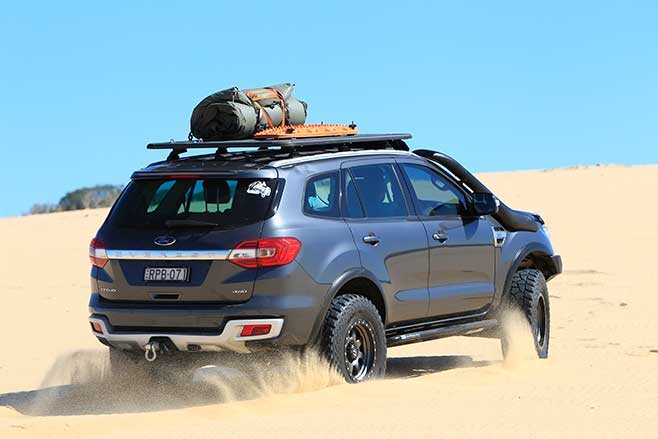 The Everest hit the market in 2015 and Richard was an early adopter snaring this 2016 model. It wasn’t long before he set out his plan to make the Ford the off-road touring vehicle he wanted. However, being the first to try comes with extra challenges.

“There was a lack of information when it originally hit the market, “he says of modifying the Ford, “but the Ford Everest Club of Australia have been incredibly helpful.”

TASSIE TRIP: Touring the Apple Isle in an Everest

Like mountain- or rock-climbing, successful off-road driving all hinges on how well you connect with terra firma. On your 4x4 rig that starts with tyres, and Rich has fitted a set of Mickey T ATZs to Fuel alloys, improving off-road grip and durability while still being a great tyre for everyday on-road driving. The 285s on +6 rims poked out of the factory ’guards a touch, so a set of slimline flares keep them covered. 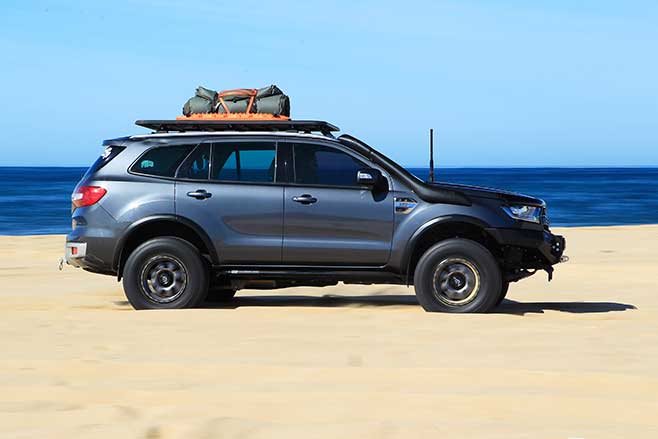 “I felt the original stance is a little too narrow, so getting it right has been most rewarding,” Richard admitted. We reckon he nailed it!

Helping keep the Everest clear of both the tyres and the terrain is a Tough Dog suspension kit that gives the Ford a modest 50mm of lift. For those occasions when even the lift doesn’t give enough clearance, a set of heavy-duty rock sliders from Queensland’s Southern Cross Fabworks run down the flanks to protect the sills from damage. 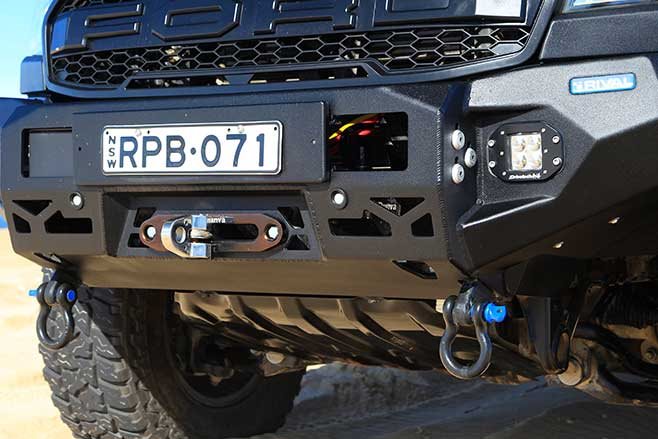 Richard says the safety features of the Everest were one of the reasons he chose it, so it was important that any accessories fitted retain their operation. That and the Ford’s on-road performance, which, after driving Prados in the past, would be like driving a Ferrari compared to a Coaster bus.

Choosing the Everest wagon over a Ranger ute gives Richard better ride and refinement, but as big as the Everest is, it won’t carry as much of a load as the ute. Rich says that a set of drawers for the cargo area are on his list of to-dos, but for now a Rhino-Rack roof platform does the job of carrying anything that won’t fit inside. 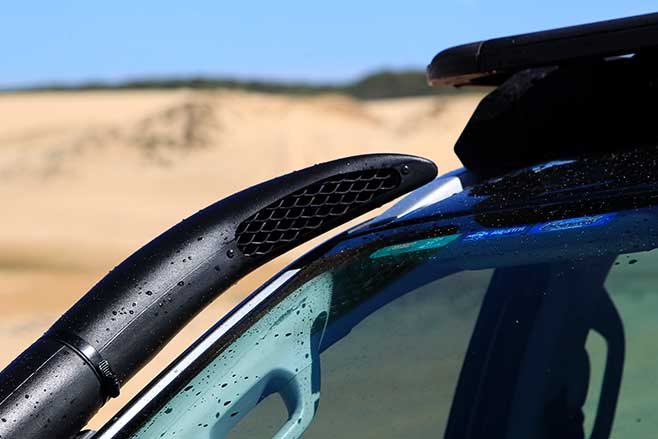 A tune for the otherwise stock 3.2-litre engine is also on the wish list. The loping five-cylinder diesel gets its dose of fresh air via a TJM Airtec snorkel, while the rest of Ford drivetrain with a six-speed auto, driver selectable multi-terrain system and factory rear diff lock, remains up to the task.

It may not be a wildly modified vehicle, but the mods have been well thought-out and implemented to get the job done. The Everest serves double-duty as a daily driver, but Richard isn’t scared to take the car off-road and has hit some of the best off-road locations on the east coast including Moreton and Fraser Islands, the tracks in the Coffs Harbour Hinterland and the Victorian High Country.

“The plan was always to build a car that can be used every day and still be able to take me on challenging tracks,” says Richard. “Although, if I did it again, I would have ordered it in white; the bush pinstriping looks terrible up close.” 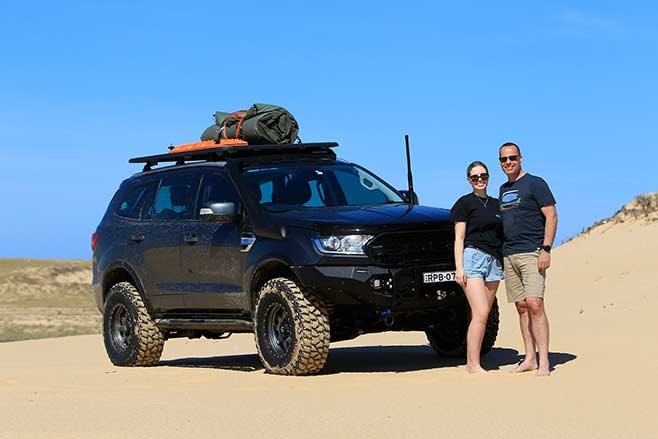 The Ford sees plenty of bush use on the tracks closer to home in Sydney on a regular basis including the Watagans, Yalwal, Stockton and Blacksmiths Beaches, Lithgow and the Blue Mountains; so it’s earned those pinstripes the hard way. Richard says he’s keen to travel farther afield with the Simpson Desert, Cape York, Western Australia and a trip back to the Victorian High Country all on his hit list.

So far the Everest has proved more than up to the task. With the further mods planned for it, and some precious time, we’re sure Richard will reach future summits. 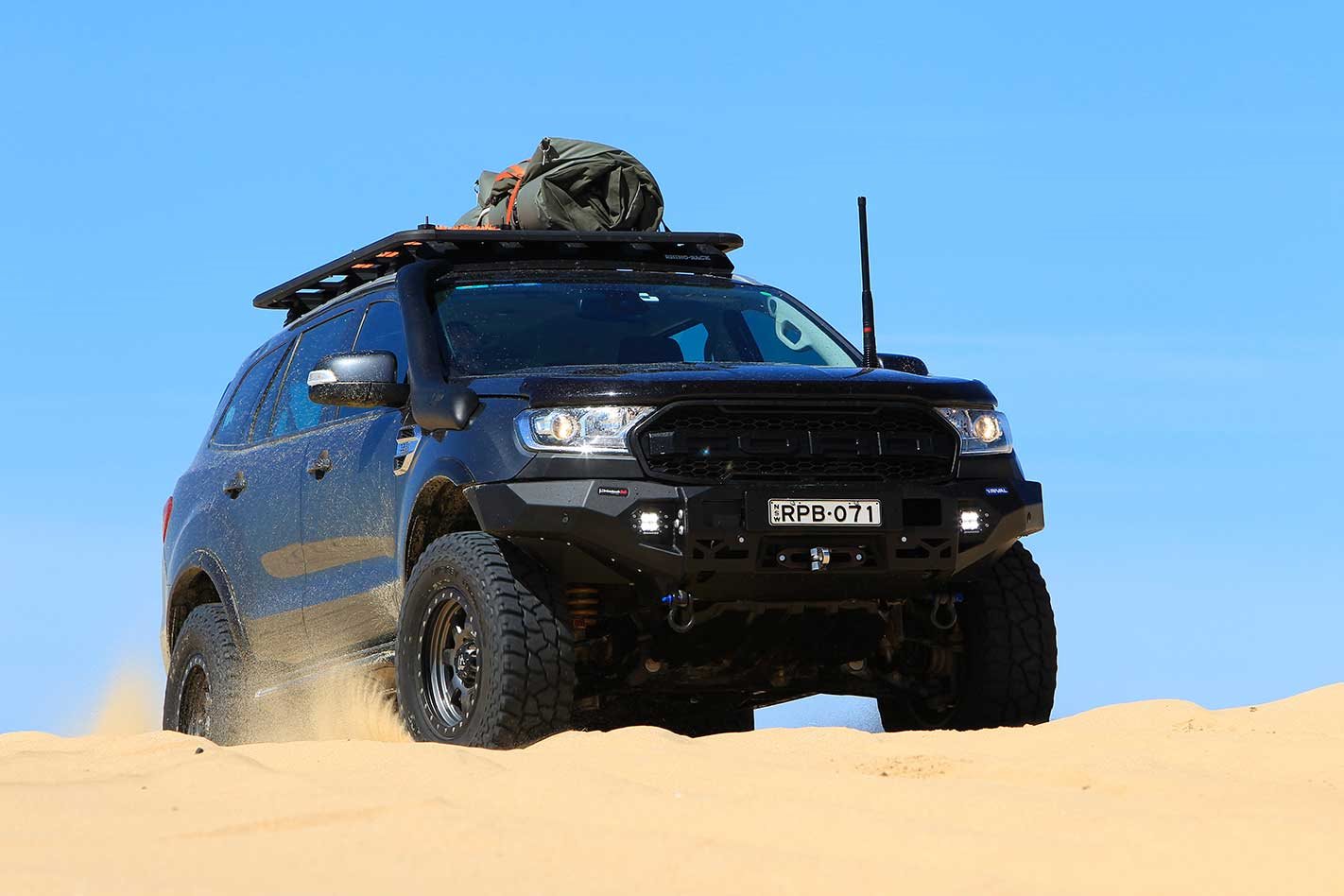 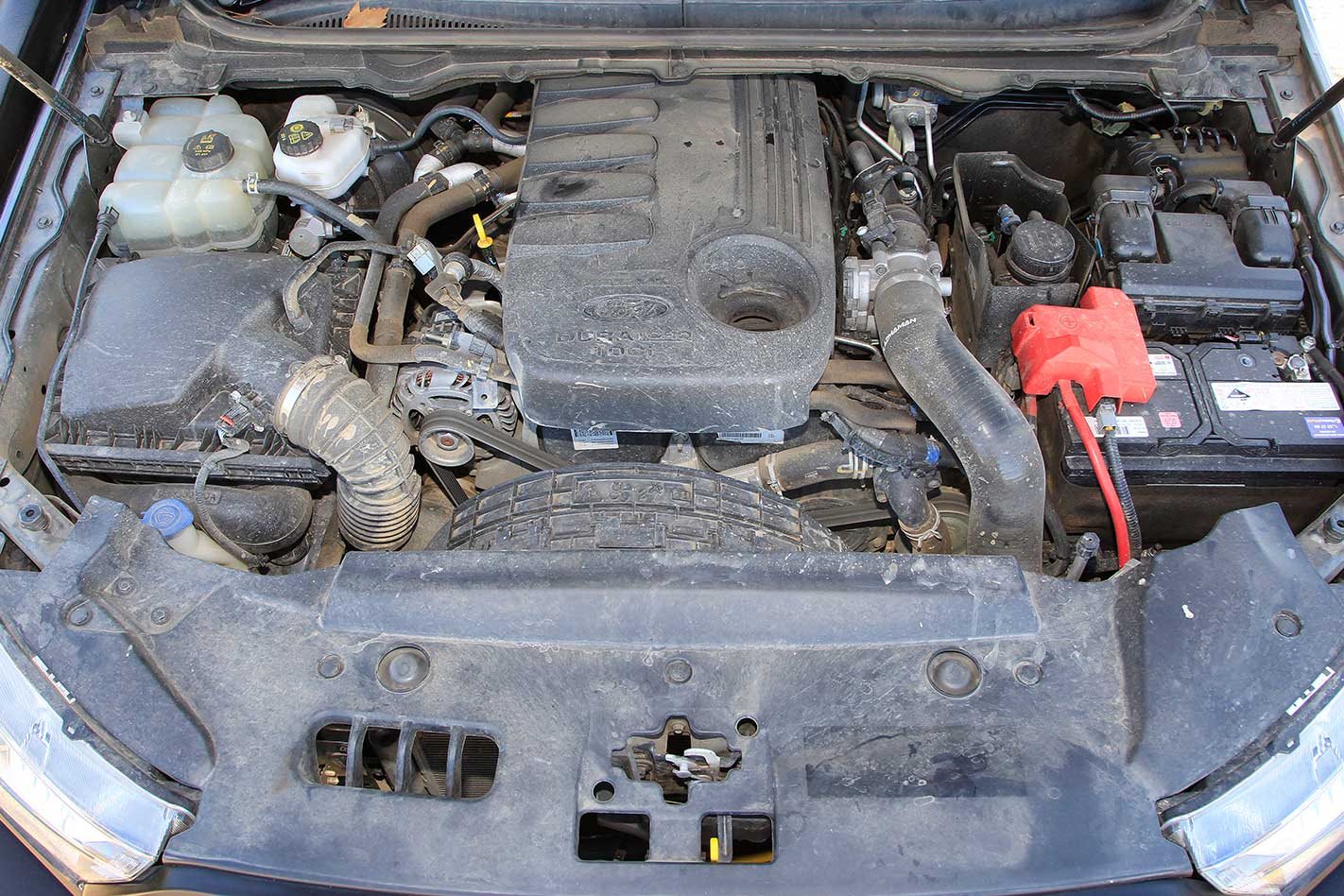 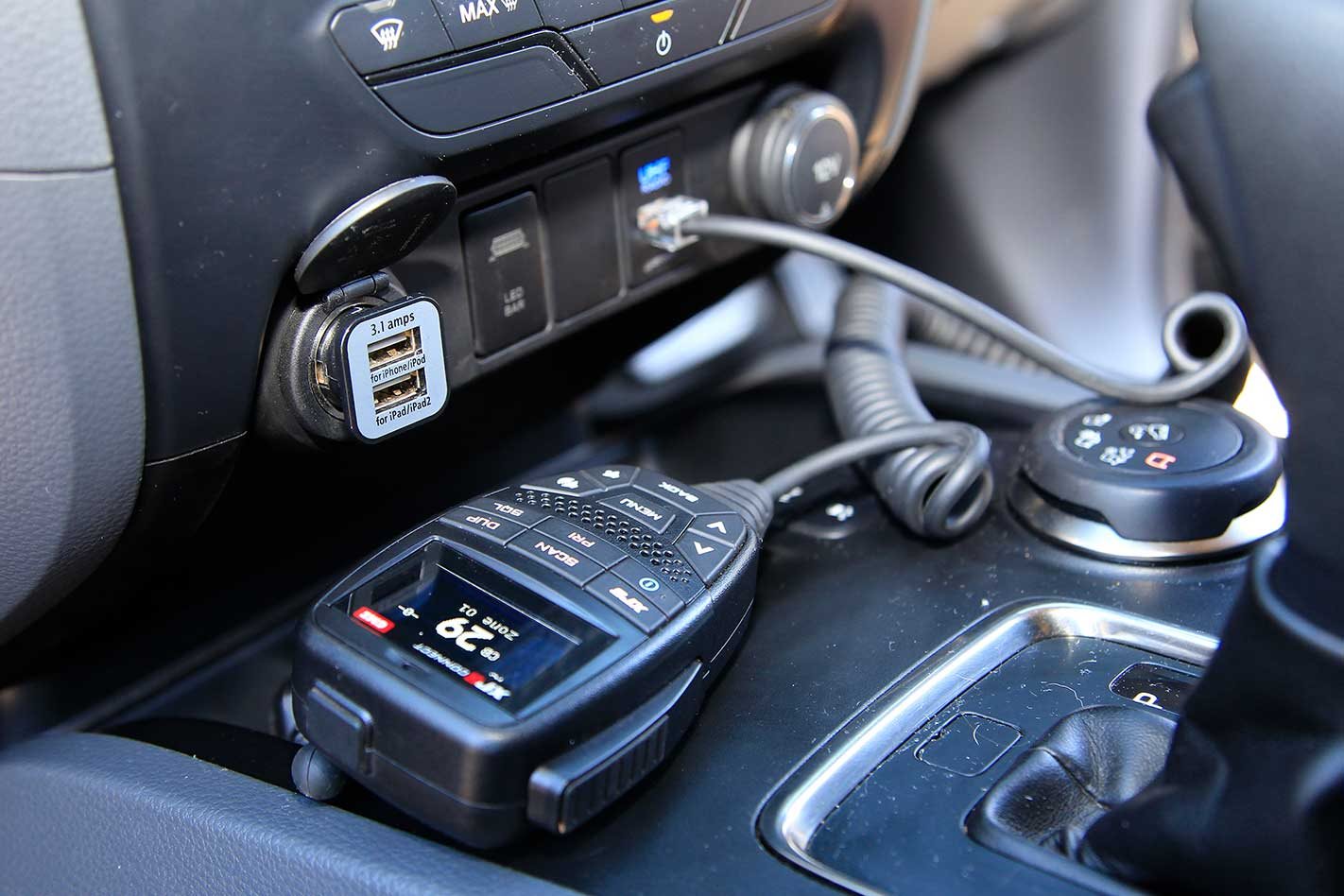 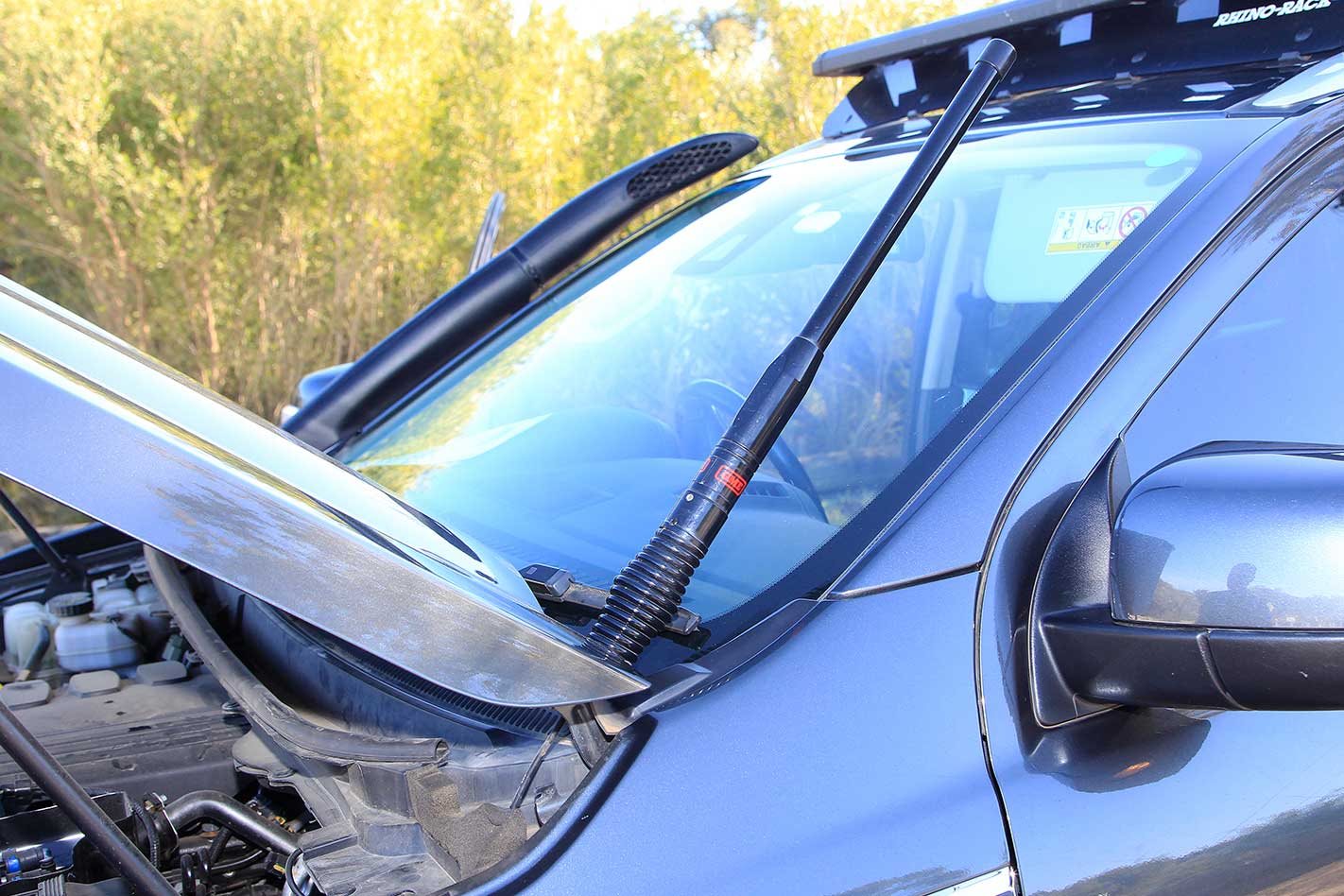 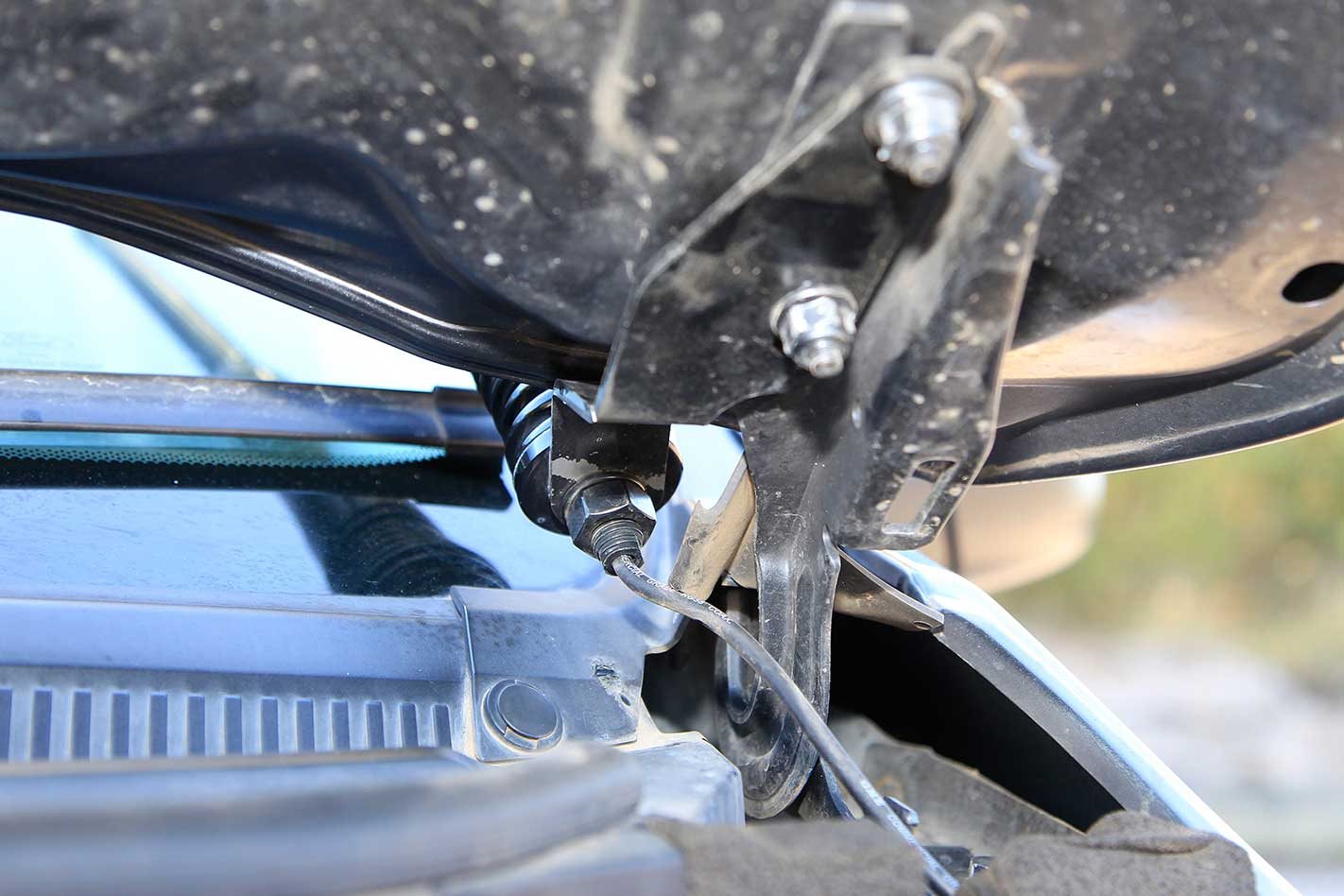 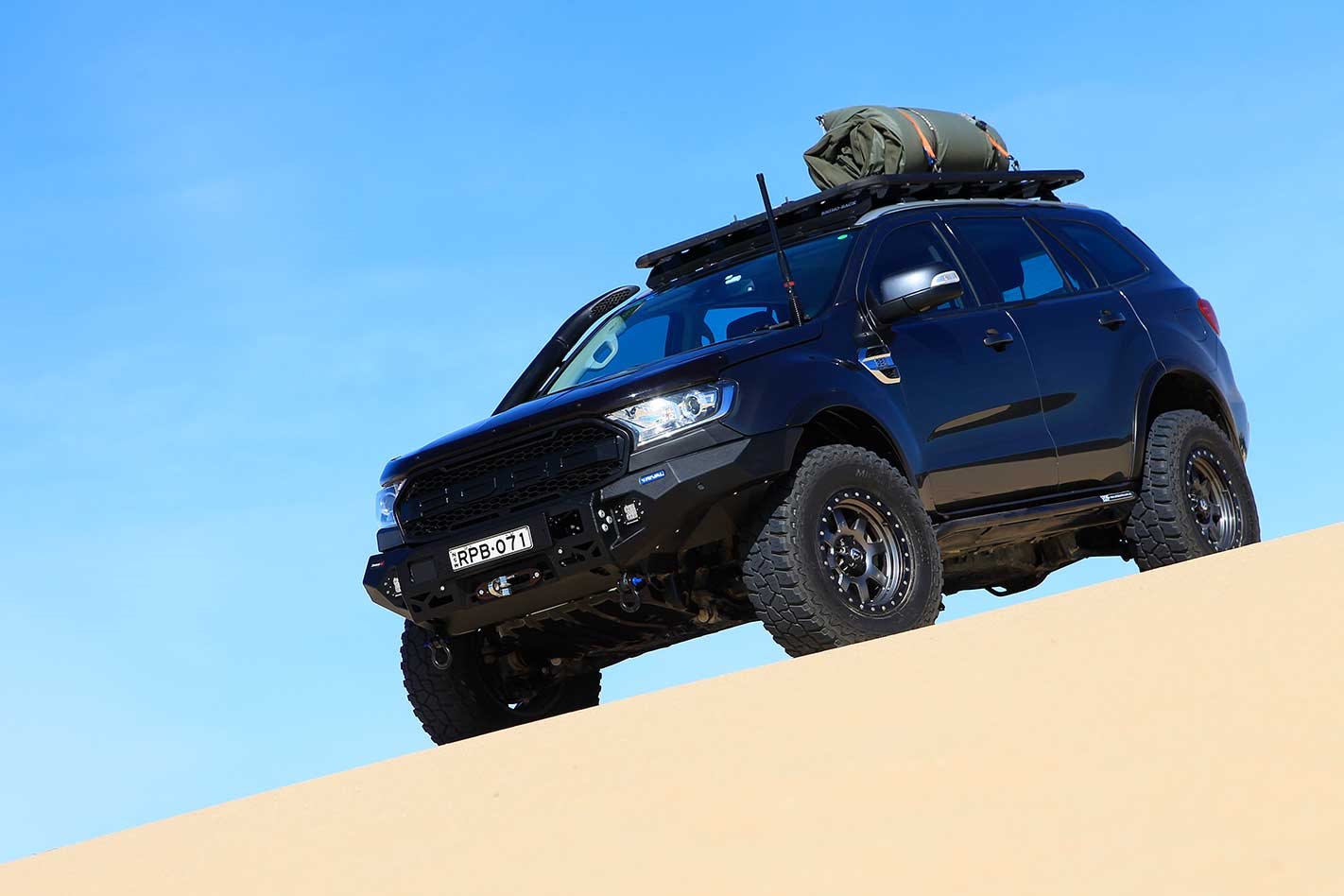 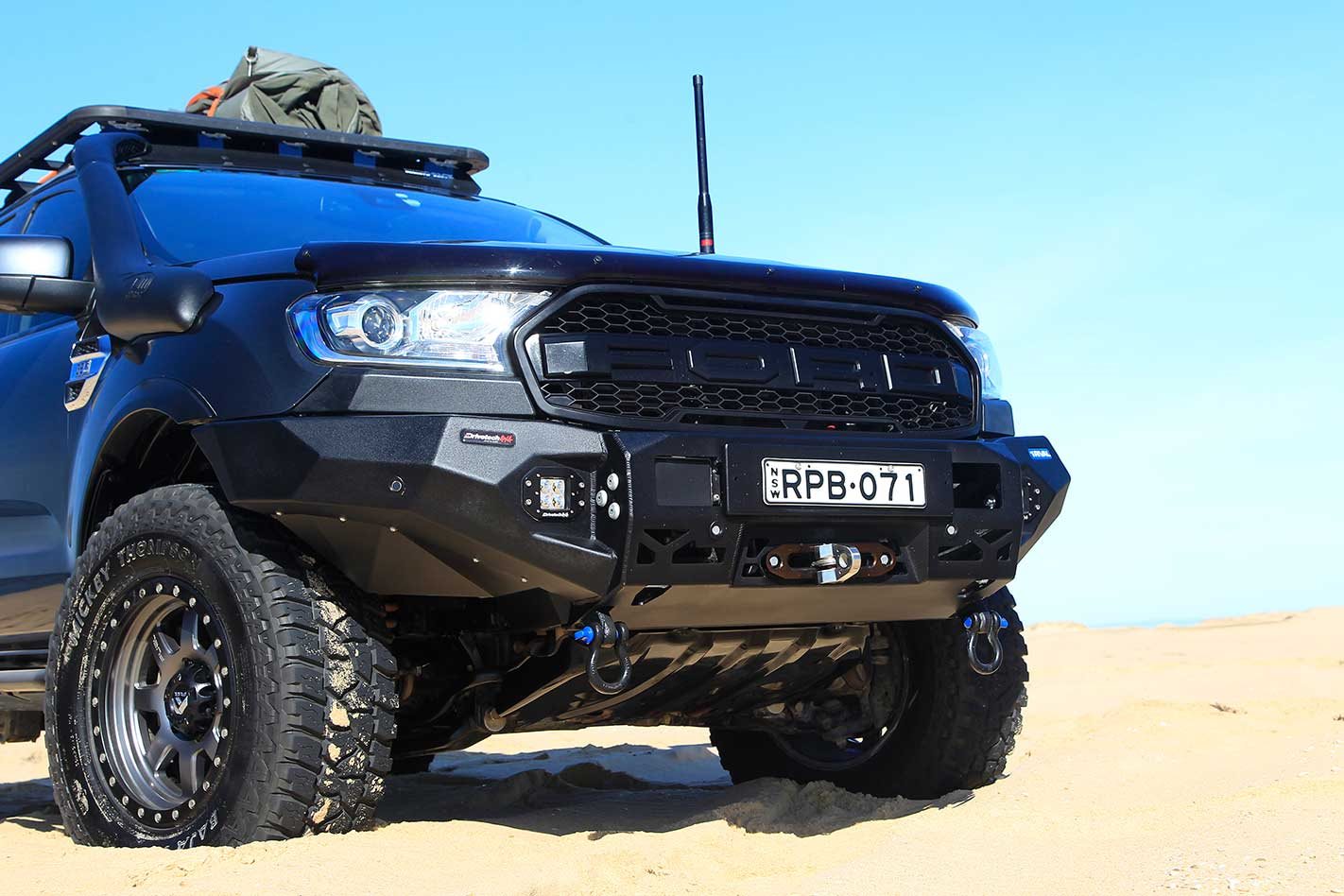 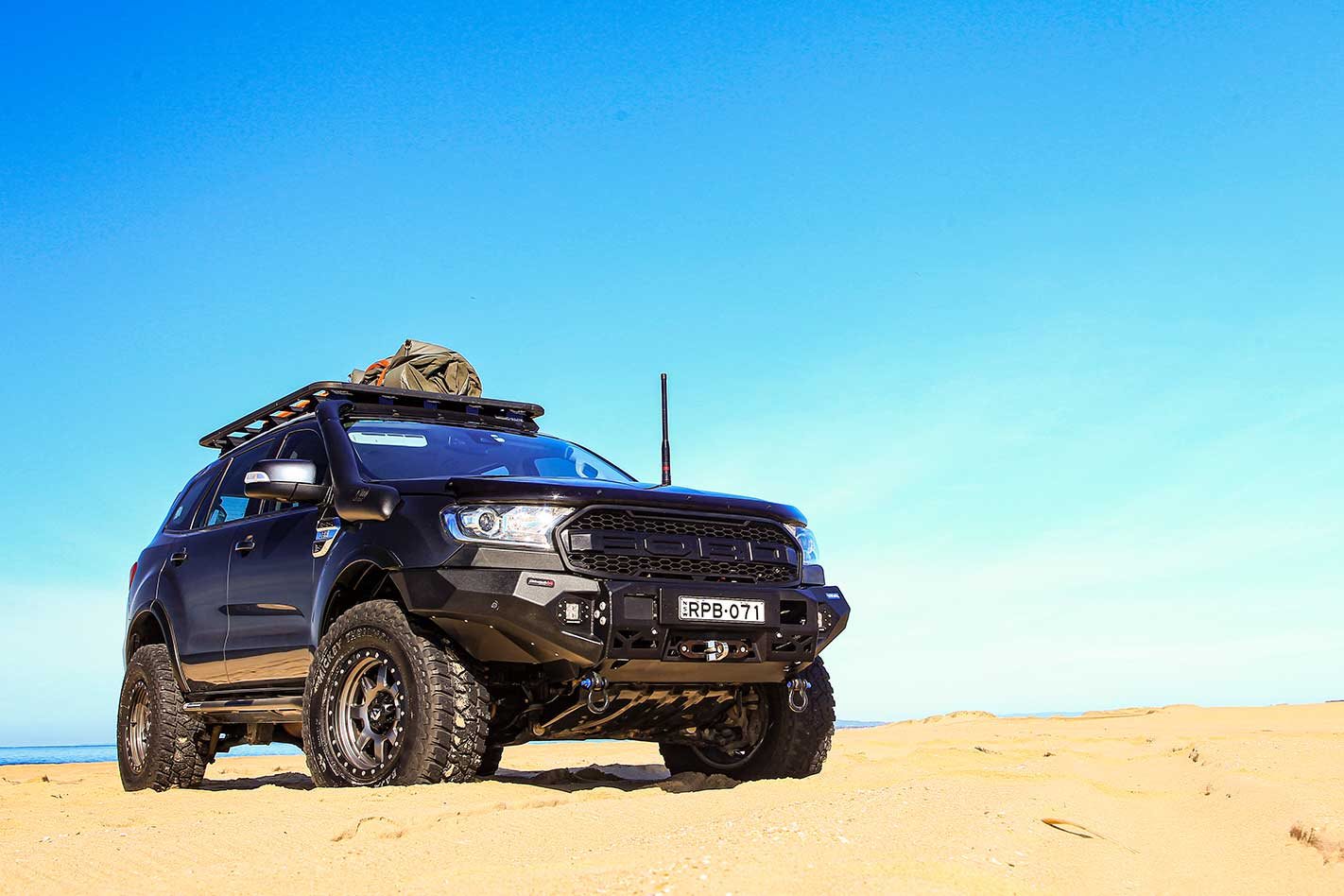 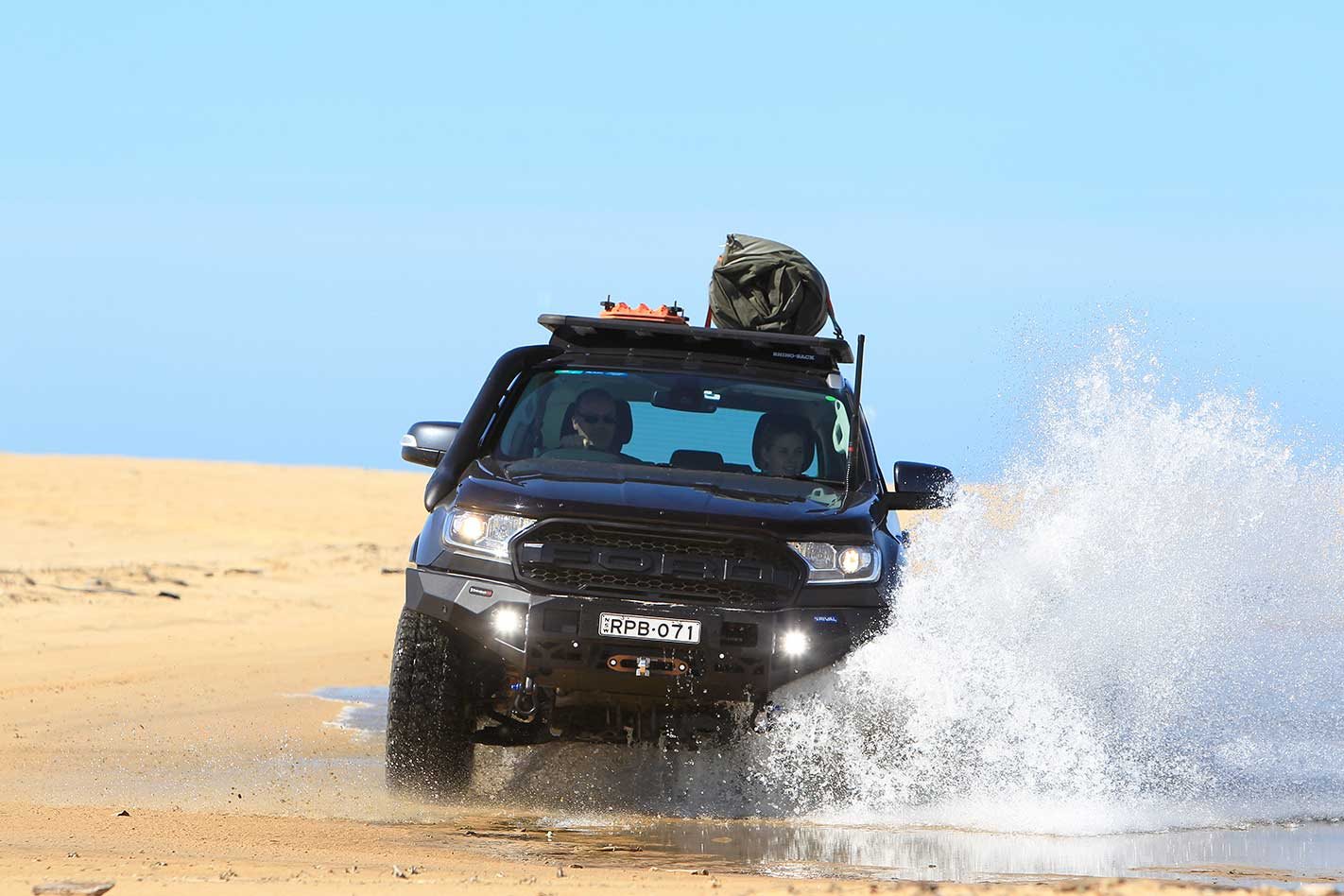 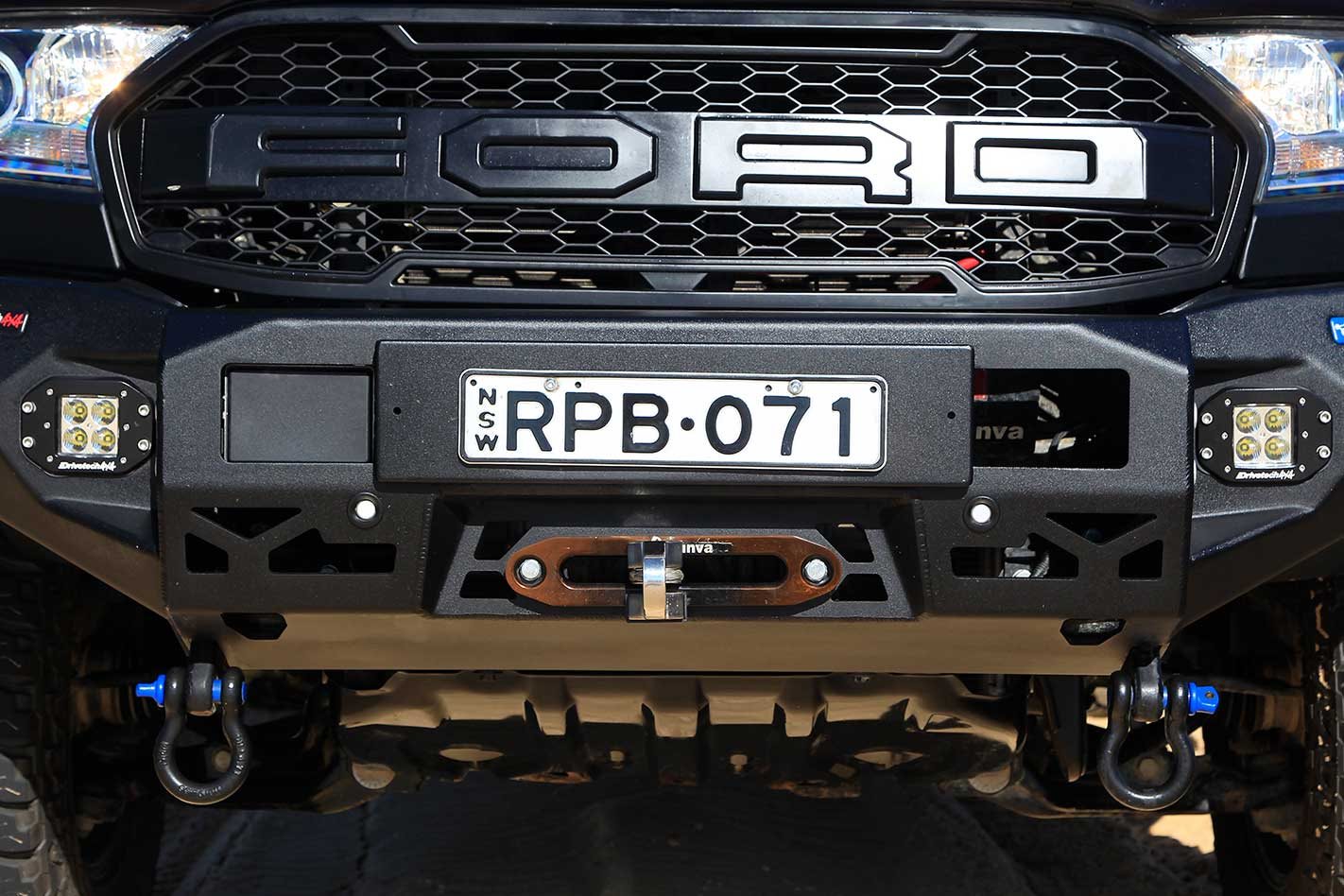 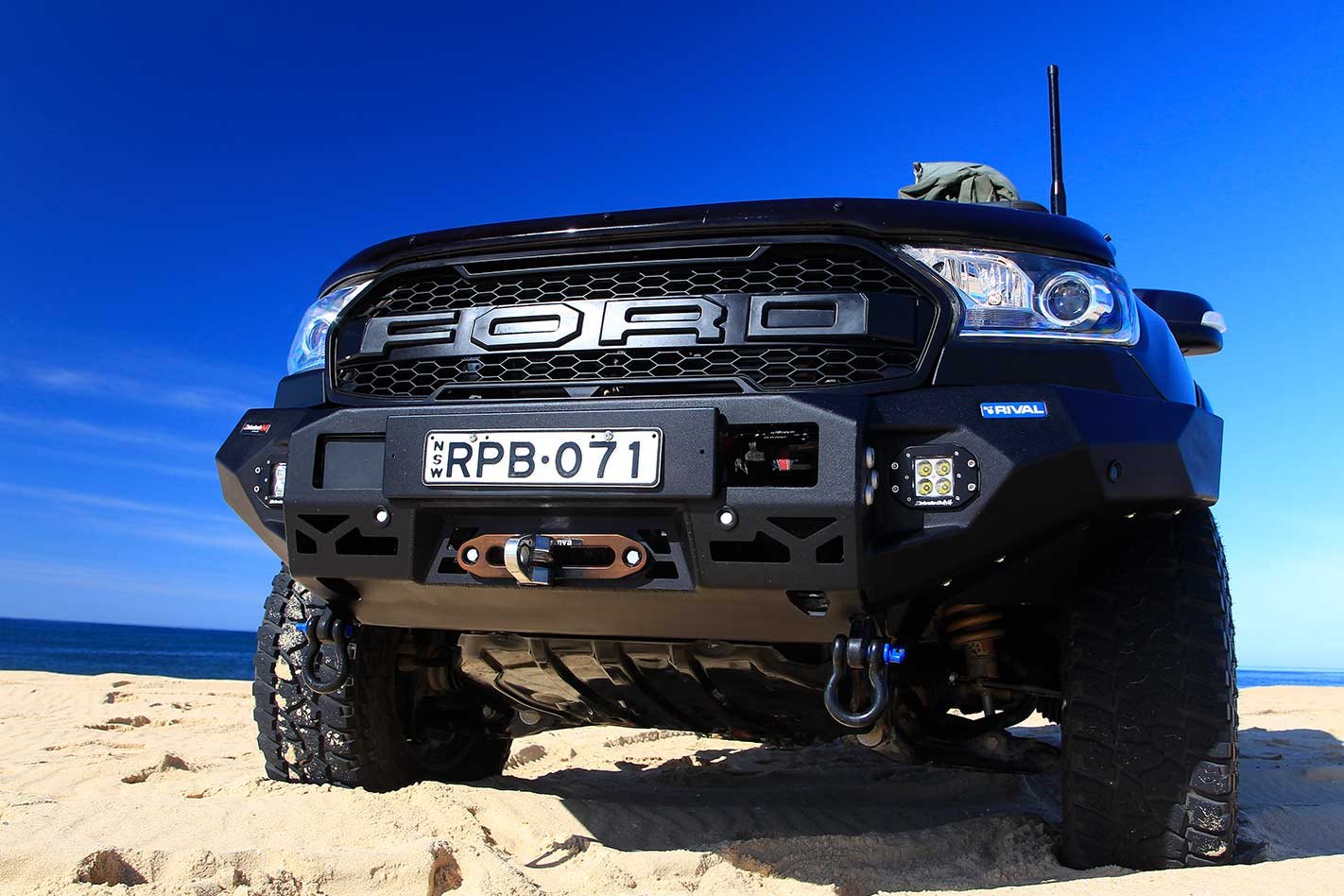 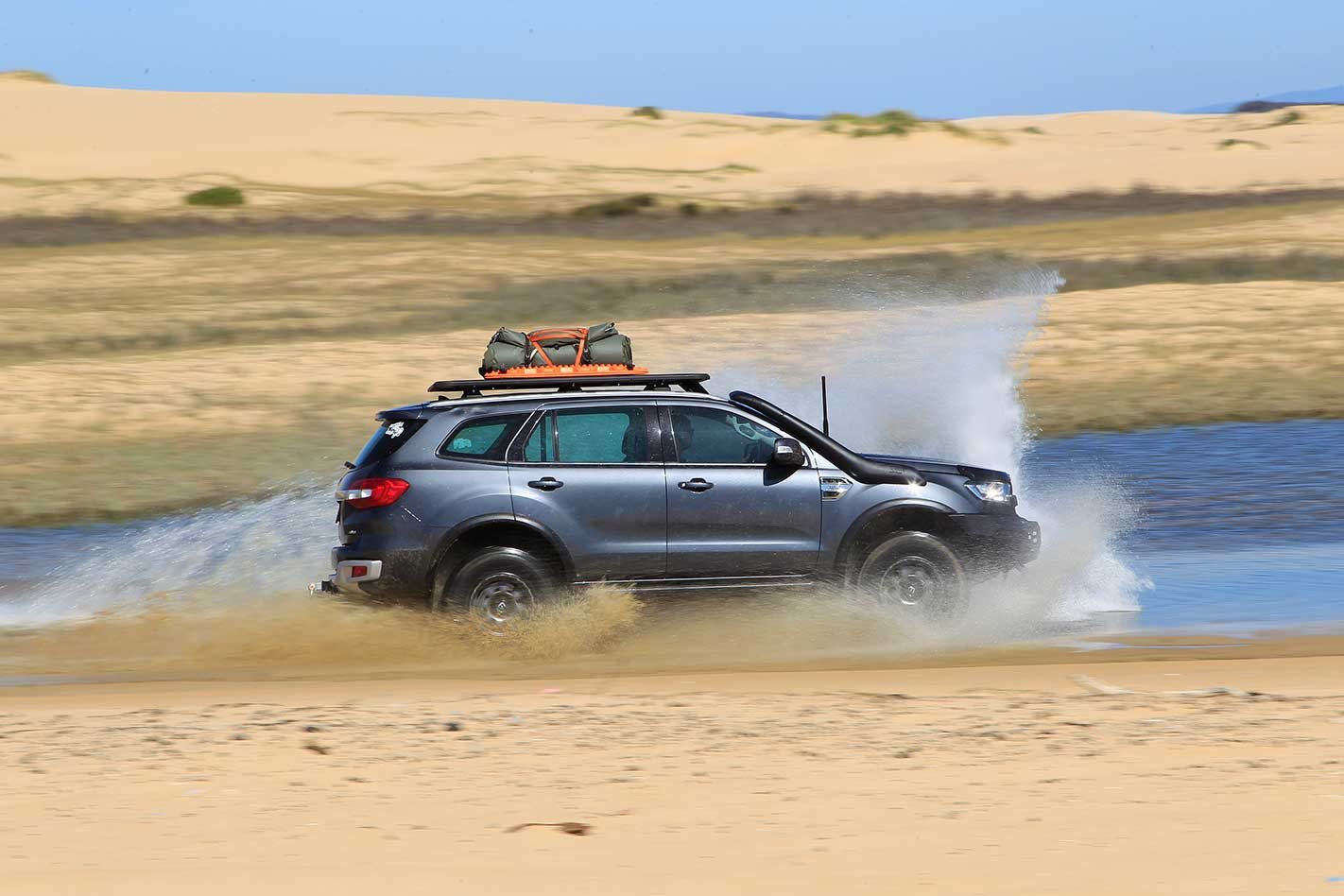 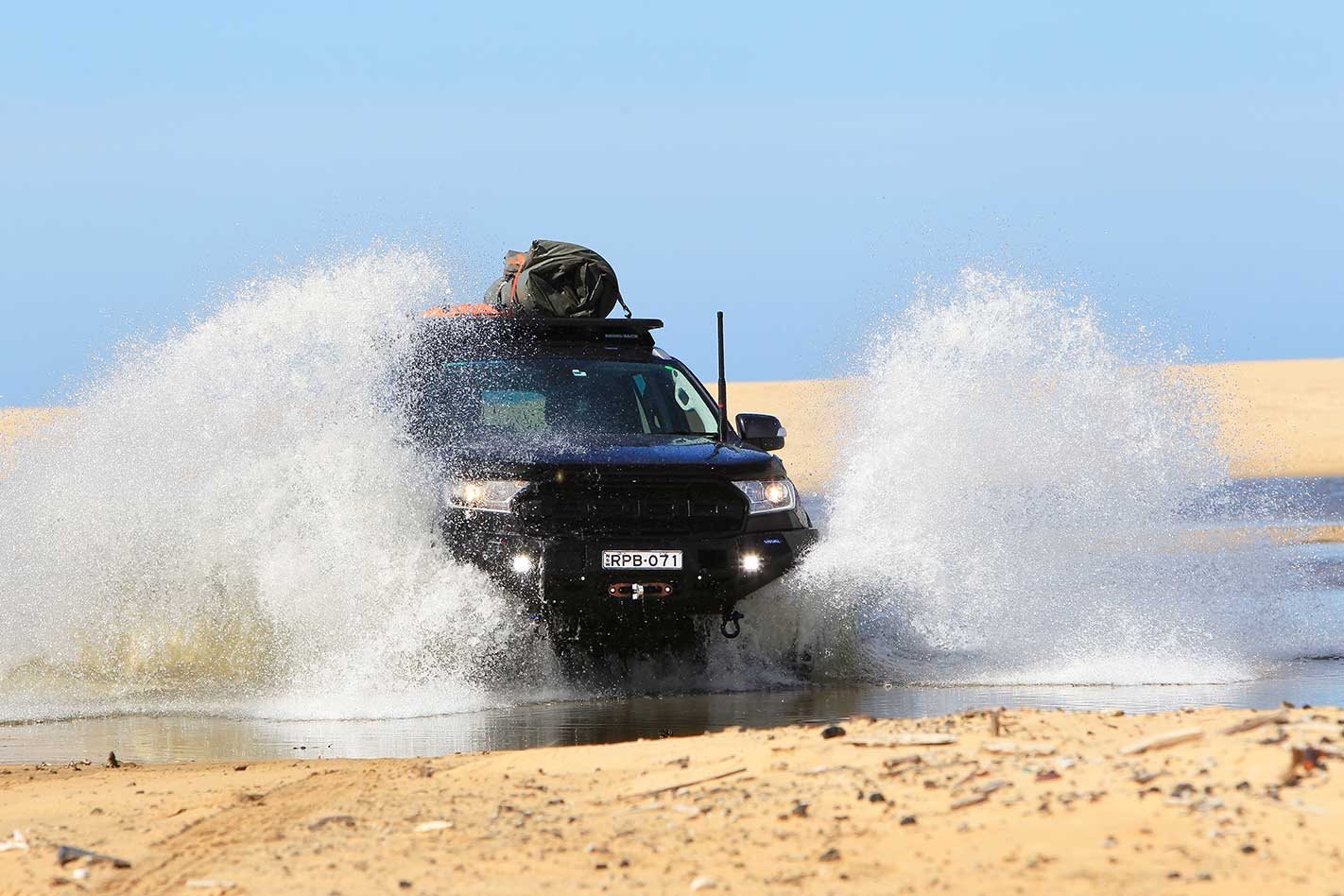 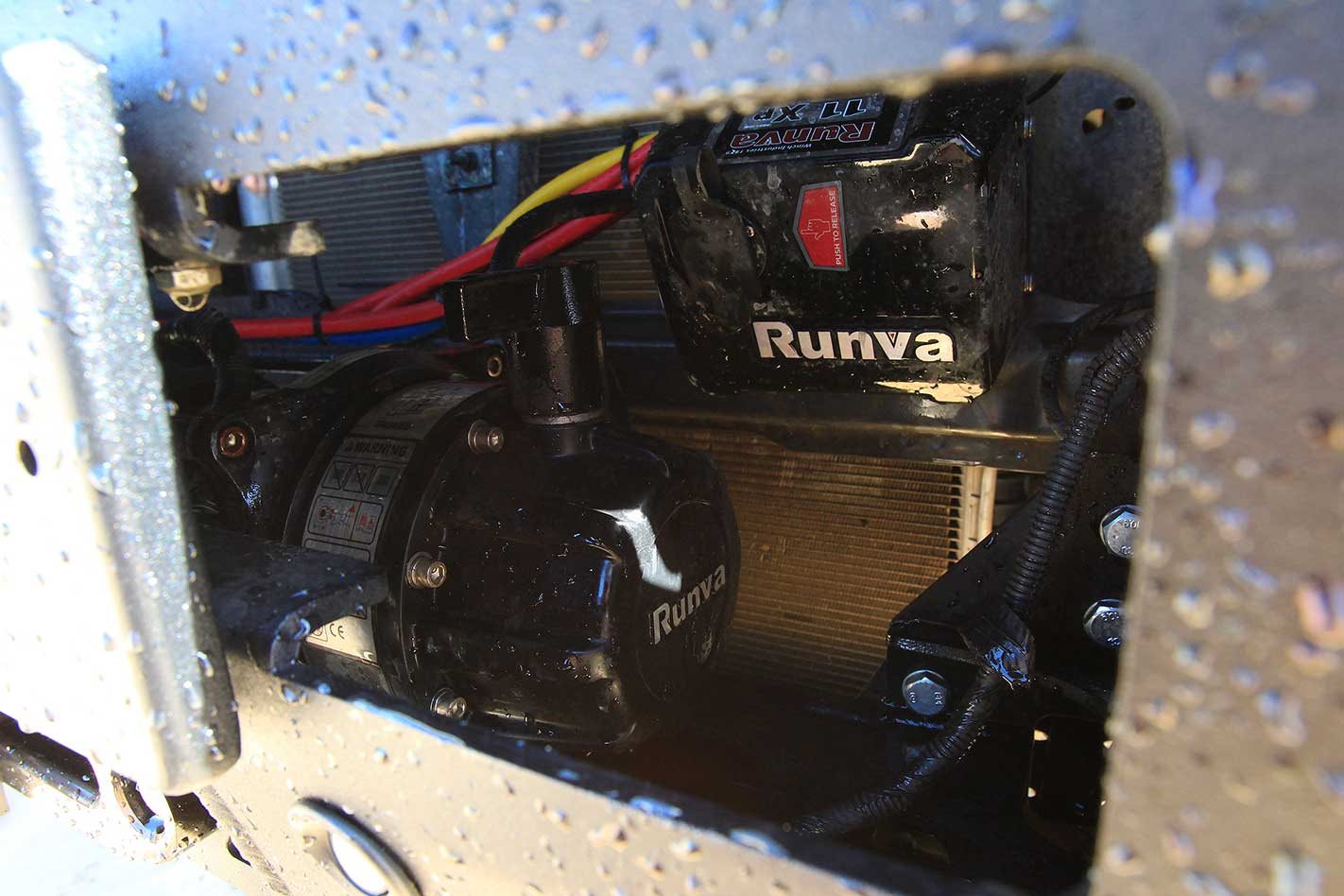