IT’S AN odd line of work this. It often feels like we’ve come across the absolute pinnacle, something that simply can’t be topped.

Sometimes it’s a new model 4x4 that completely outshines the previous generation. On the other hand it could be an inspiring travel yarn by people out there doing things most could never dream of. And then there are the phone calls with Andrew from On Track 4x4.

If that name rings a bell it’s because he’s the owner of the earth-shatteringly-fast Nissan Y62 Patrol featured in our December 2016 issue (with its insane 350kW of daily-driven V8 grunt). So when he said he had a GU Nissan Patrol unlike anything we’d ever seen before he had our attention straight away. Travis Rampling’s one-of-a-kind GU Patrol has nearly double the torque of a 200 Series V8 Cruiser, fuel consumption that’d rival most dual-cab utes, and enough off-road ability to take on basically any track you point it at.

Let’s not beat around the bush. How do you get a ZD30 Patrol to punch out nearly 1200Nm and 380kW on 37in tyres? If you’re Travis, you yank out the old ZD and shoehorn into its place a 6.6L Duramax V8 turbo-diesel more commonly found in full-size Chevy Silverado pick-ups. “Travis came to us and was chasing more power than the ZD30 could put out, and eventually we decided a Duramax would be the best option,” Andrew told us.

“I’ve owned it since new in 2002 and the ZD had never really let me down, but I just wanted more,” added Travis.

To make the install as neat and thorough as possible, On Track 4x4 kicked things off by stripping the GU down to its chassis and strengthening key areas before mounting the engine and transmission combo. To keep up with the grunt of the Duramax the Patrol gearbox was also swapped out for the matching Allison six-speed auto. There’s a four-inch stainless snorkel plumbed up to the turbo and Garrett intercooler, with a matching four-inch exhaust dumping spent gasses out the rear. To achieve the mind-numbing power figures Travis had the ECU custom-programmed with five separate tunes to give versatility in any situation. “There’s a few tunes in there that go from out-and-out performance through to fuel savings or general driveability, all available at the push of a button,” Andrew said. “At its most aggressive it makes around 380kW at the wheels, and in fuel-saving mode it can do sub 13.0L/100km fully loaded and towing a camper trailer.”

You can’t go pushing that much power through a standard diff and not expect a few issues along the way. Up front the front axle housing has been fully laminated to prevent bending or twisting, and a TJM Pro Locker has been slotted inside the centre. After turning three standard rear diffs into paste, they’ve swapped it out for the larger H233 unit found in some models with an ARB Air Locker tucked inside. 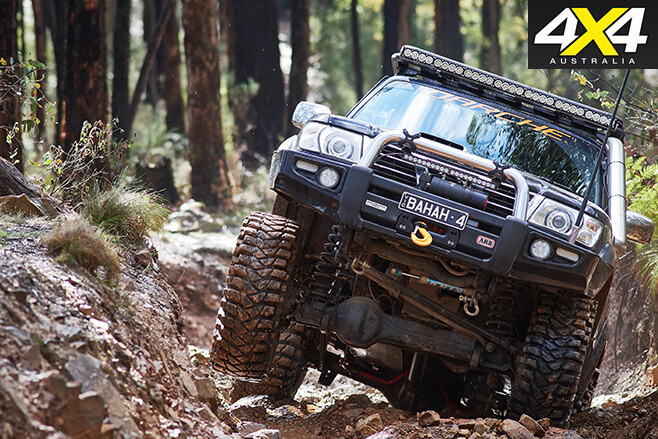 Despite the larger tyres, the torque profile of the Duramax, as well as the Allison’s ratios, has the standard 4.3:1 diff ratios right on the money. To pass engineering the brakes needed to be upgraded as well, so the GU is now running a hydro-boost brake system with crossdrilled and slotted rotors on each corner.

There’s an array of heavy duty adjustable arms holding both diffs in place, while custom-valved Performance Series King 2.5in stroke shock absorbers help reign in the four-inch-lifted King springs. The rubber bump stops were also ditched in favour of King hydraulic offerings to ensure no bottoming out, no matter how deep the washouts. The GU reads off like a who’s who of high-end parts underneath, but the exterior is the automotive version of a British gangster – presentable enough to not draw attention, but mean enough to knock out a few teeth along the way.

Up front the ARB Sahara bar was dissected by On Track 4x4 to accept a Viper unit from Red Winch, a trick high-mount replacement out of the UK with standard features like an air-free spool. Rather than block the radiator with huge HID lights, Travis opted for a set of slimline LED bars from Baja Designs, with a 20in slung inside the front bar and a matching 50in up on the Rhino Pioneer roof platform. 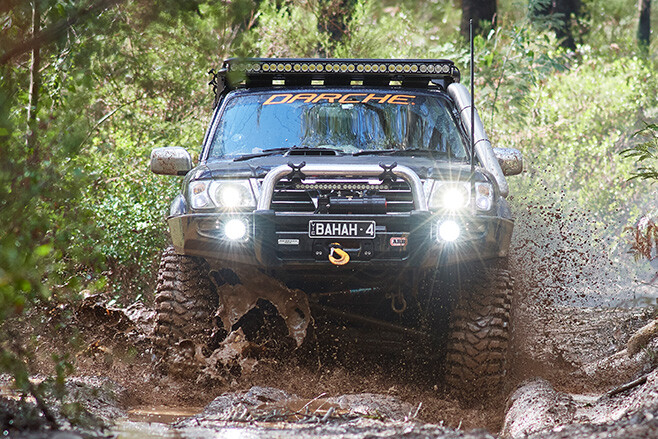 Like most of the fab work on the GU the rock sliders are a custom offering from On Track 4x4 and sit tight to the body for maximum ground clearance.

The rear bar is an ARB unit with a spare beadlocked ProComp Extreme hanging off the driver’s side. A jerry can resides on the other side. 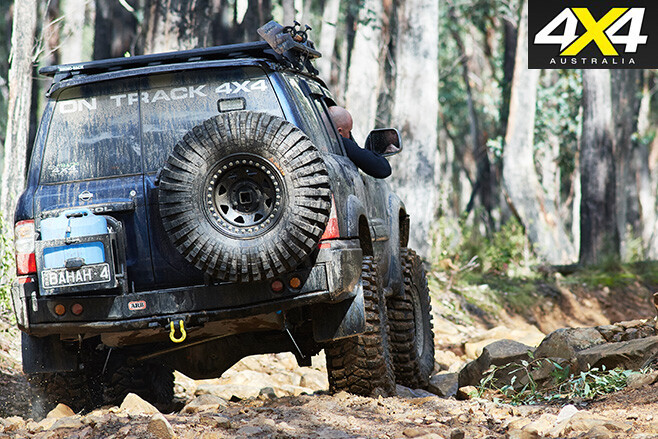 Open the rear barn doors and things don’t get any simpler. A drop-down table on the right-hand door makes for an easy-to-use cooking station with LED lighting throughout, and a 60-litre ARB fridge lifts into place thanks to an MSA 4x4 drop-down fridge slide. Plus there’s a twin-drawer design from Outback Drawers that has a few tricks up its sleeve.

Due to the lack of room under the bonnet, a second battery now lives inside the drawers, with a Redarc BCDC 1240 unit keeping it charged. A twin-piston ARB compressor, solely for pumping up tyres, also resides in the drawers. While a second single compressor under the front seat runs the lockers and winch-free spool. 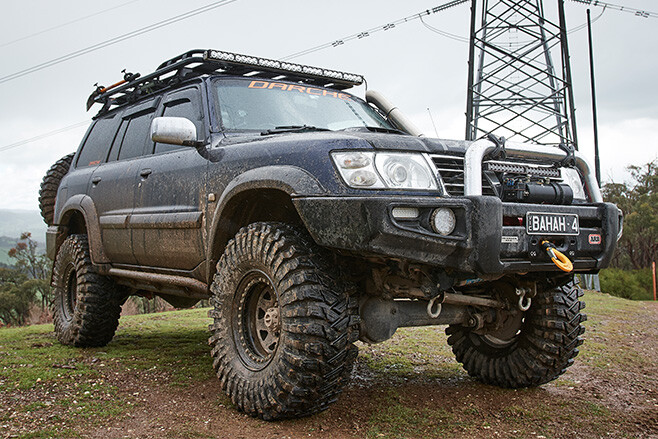 Up front the stock pews have been ditched in favour of a set of Recaro units, while an Icom IC440 UHF handles communications.

It might sound like another over-the-top build that never gets driven, but that couldn’t be further from the truth. With the help of some of the most knowledgeable blokes in the industry, Travis has, over time, pieced together one of the ultimate touring 4x4s you can imagine.

It’ll comfortably do daily duties, rock crawl with the best of them and take the family and the camper to Fraser Island, and it will do it all while blowing the pants off SS Commodores. Just don’t ask him how much he has spent. Duramax… you mean the Colorado engine?

YOU’VE probably heard the term Duramax thrown around recently with the updated Holden Colorado wearing the name tag. While the Duramax in Travis’s GU Patrol rolled off the production line in the USA (a 6.6L twin-turbo V8 packing 270kW and 881Nm), the Colorado’s donk is an Italian-made 2.8L four-cylinder turbo-diesel with a slightly less impressive 147kW and 500Nm. So what do the two have in common? Absolutely nothing.
The term is a catch-all General Motors uses for its diesel engines sold in the States. There’s no coincidence the nameplate popped up on the Colorado’s flanks right around the same time it went on sale stateside.