Here we focus on Mazda, the small Japanese brand that has consistently punched above its weight with products, and is most famous for its MX-5 sports car and the distinctive Wankel rotary engine.

Toyo Cork Kogyo Co was formed in 1920 and, under president Juhiro Matsuda, shifted from the struggling artificial-cork business to machine tool manufacturing by the end of the decade. The first Mazda vehicle was a three-wheeler truck called the Mazda-Go (above).

Toyo Kogyo production was interrupted by World War II – dramatically so when the US dropped an atomic bomb on the company’s home city, Hiroshima, in August 1945.

The main factory and headquarters, however, was largely spared from the blast, thanks to its geographical position behind a mountain.

German engineer Felix Wankel developed an alternative internal combustion engine while working for German car maker NSU in the 1950s – a motor that eschewed pistons for a triangular rotor that turned within an oval-shaped combustion chamber.

Appreciating the advantages of the distinctive engine – light weight, compact, super-smooth and capable of high revs – Mazda signed up to produce and develop the Wankel rotary in Japan.

Mazda’s first rotary car was the 1967 two-seater Cosmo Sport (or 110S), but the company would start a cult following for piston-less cars with its 1978 RX-7.

The compact, four-seater twin-rotor sports car proved Mazda’s commitment to the engine long after NSU and other makers had been scared away from the thirsty rotaries after the 1973 oil crisis.

THE WORLD’S FAVOURITE ROADSTER IS BORN

By the late 1980s, the affordable British sports cars pioneered by the likes of MG and Triumph were a faded memory.

Their spirit, however, was spectacularly revived in 1989, when a former journalist of Wheels magazine encouraged Mazda to build a model that would be called the MX-5 – or Miata in the US where it was first launched.

Its perfect recipe of open-seater layout, affordable price tag and fun, rear-wheel-drive handling made it an instant hit and established it as the world’s best-selling sports car.

Now in fourth-generation form, more than one million MX-5s have now been sold.

In the same year the MX-5 launched, Mazda decided to copy Toyota’s move with the Lexus luxury off-shoot.

It created Eunos as a marque for its most luxurious models, and Australia was introduced to vehicles such as the Eunos 30X – a small coupe based on the 323 hatchback but featuring more radical styling and a tiny (1.8-litre) V6 instead of a four-cylinder.

The Eunos brand struggled, though, and was dropped just years later.

Although regulations for the year had aided its cause, the victory was still an impressive feat – achieved with the 787B racing car powered by a quad-rotor engine.

Amati was the highly ambitious plan to take Mazda – a small, independent car company determined to punch well above its weight – into the premium segment.

It was officially announced to the world at an August 1991 press conference, with Mazda claiming it would launch its bold new premium-segment contenders in the first quarter of 1994. 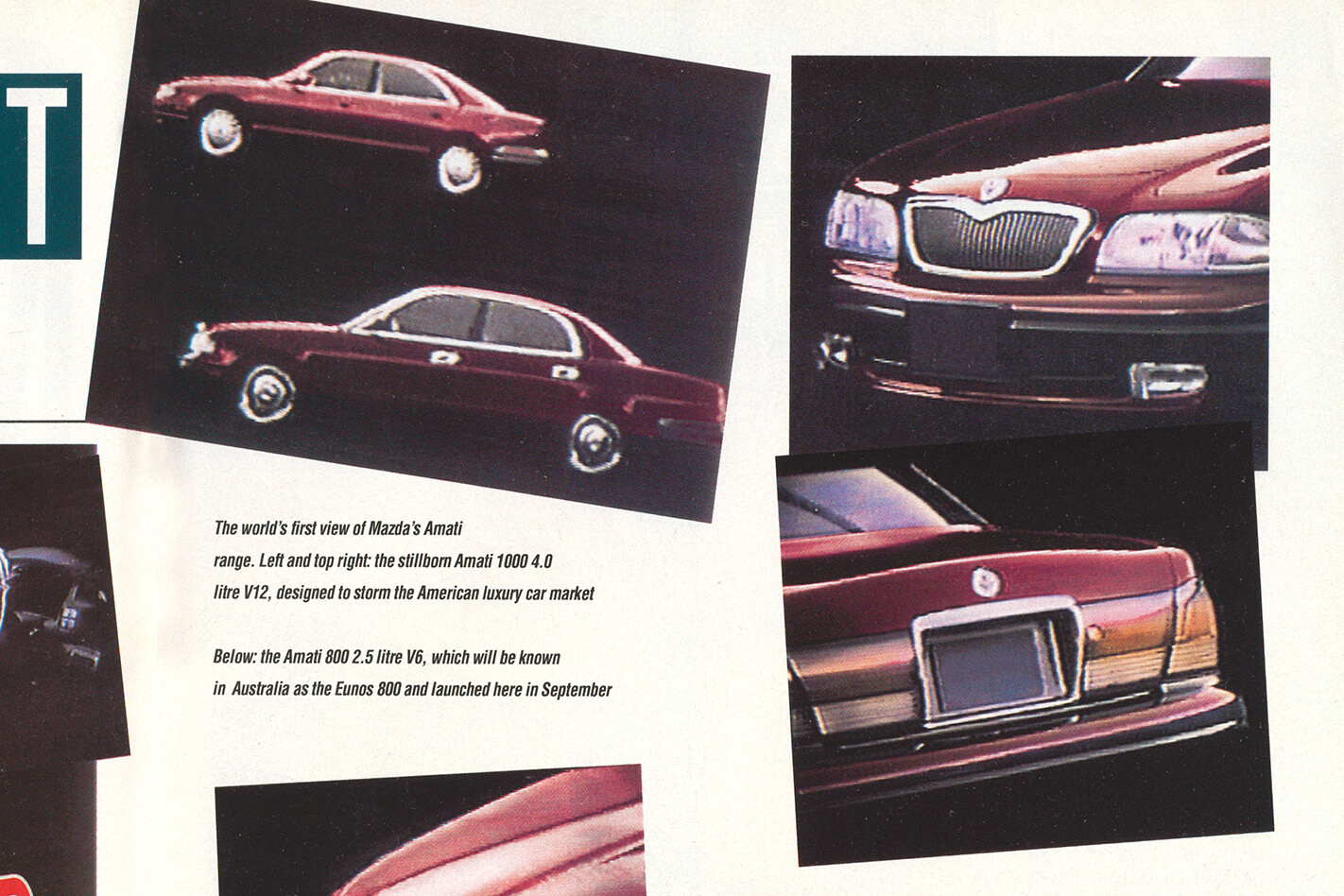 It was a bold, brilliant plan – right up until the Japanese yen imploded, the financial bubble burst, and the whole program tumbled like a near-finished high-rise tower razed with demolition dynamite.

Mazda started a long association with Ford in 1969, when the companies formed the Japan Automatic Transmission Company (JATCO) along with Nissan.

Ford would eventually buy a sizeable 33.4 per cent stake in Mazda, and an alliance produced a raft of twinned models including the Mazda 121 and Ford Laser city cars, Mazda Tribute and Ford Escape SUVs, and more recently the Mazda BT-50 and Ford Ranger utes.

Former Oran Park track manager Alan Horsley was signed by Mazda in 1981 to start a successful period for the brand in Australian motorsport.

Major achievements included the 1983 Australian Touring Car Championship and four consecutive Bathurst 12 Hour races from 1992 to 1995, all with RX-7s (below).

Horsley, who retired in 2012, also created some locally modified road cars – including the 2002 MX-5 SP that was notable for using a turbocharged engine.

Rotary-powered Mazdas exited showrooms in 2012 with the discontinuation of the RX-8 sports car, which after nine years was unable to keep pace with the latest emissions regulations.

Mazda has since been sending mixed signals about a production return for its iconic engine and has talked about a rotary engine being used in the context of a range-extender device that could also double as a portable power pack.

However, it did tease sports car and rotary fans with a concept called the RX-Vision in 2015.