Elise Elliott had the pleasure of driving all four generations of Mazda MX-5 and found the original as delightful as the baby of the bunch.

Family reunions are special affairs, especially when they involve four generations. So I was delighted to attend Mazda’s get-together in celebration of its iconic Mazda MX-5.

Models spanning more than a quarter of a century were lined up on the driving track at Wodonga TAFE, from the original NA car of 1989 through to the latest ND. 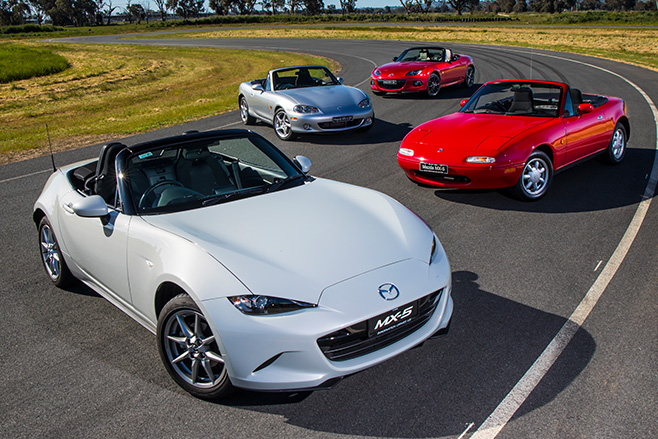 The MX-5 sticks to a simple formula: It’s an inexpensive, low slung, two-seat sports car with a convertible roof and front-mounted engine driving the rear wheels. While it’s neither breathtakingly fast nor powerful there’s something about it that’s always captivated motorists. The MX-5 is simply a joy to drive.

Mazda’s roadster doesn’t pretend to be something it isn’t. A family car it ain't. The MX-5 would be a nightmare on long hauls with your bum so close to the ground and the wind whipping your hair and punishing your ears. But damn it’s a sexy little ride.

A few laps around the track on a perfect spring day present the perfect opportunity to see and feel how the world’s top selling roadster has evolved.

The first generation NA was released in 1989. In contrast to the 1960s Lotus Elan on which it was based, the MX-5 was mechanically reliable and it didn’t leak. It was dependable, meaning you could get up in the morning and know the thing would start first time. Mazda’s roadster wasn’t so much about power but drivability. It was initially released with a 1.6-litre engine, which grew to 1.8-litres when the model was refreshed in 1994. 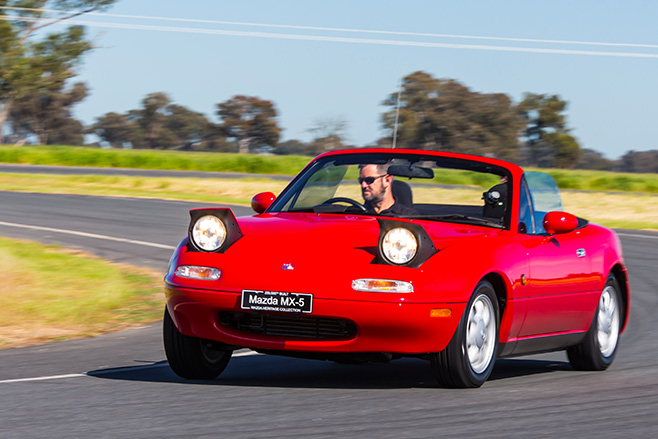 I feel nostalgic hopping in the NA. It isn’t so much the presence of the centre ashtray or cassette player but the fact a colleague at my first job had one that made me jealous.

You can see how the original Lotus Elan was an inspiration. The NA is light and terrifically fun to drive. Even the exhaust note is pleasing. No wonder it won Wheels Car of the Year in 1989. 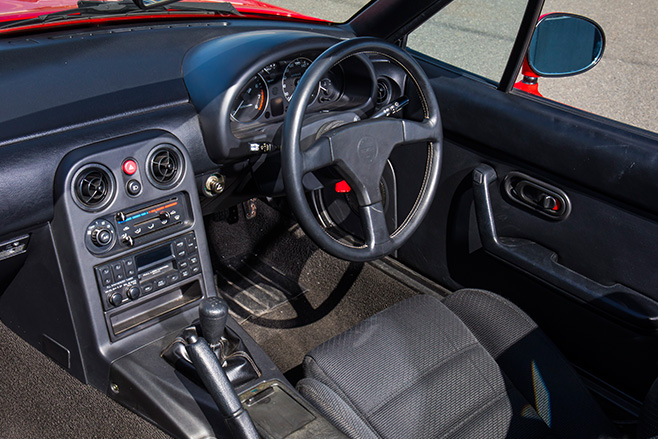 After a decade the NA was due for a rejig so Mazda introduced the NB in 1998 with additional creature comforts such as optional automatic transmission. Sadly, the spunky pop up headlights had to go because they no longer met pedestrian safety standards. The 1.8-litre NB was quieter, safer and more powerful than its predecessor, but also heavier (weighing 1065kg compared to 940kg for the NA). 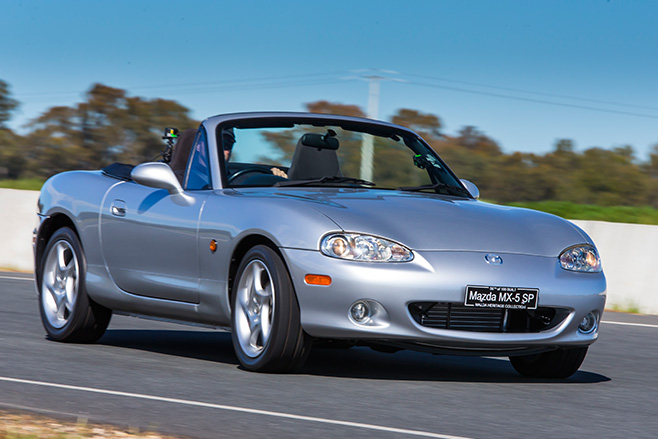 Offsetting this lard was an optional turbocharged version of the power plant. I drove this model and was impressed. The turbo has heaps of grunt transforming the tiny two-door into something approaching a muscle car.

In 2005 Mazda introduced a larger 2-litre engine. Unfortunately its additional power was blunted by extra safety features. The NC also came with a retractable roof which added further weight. 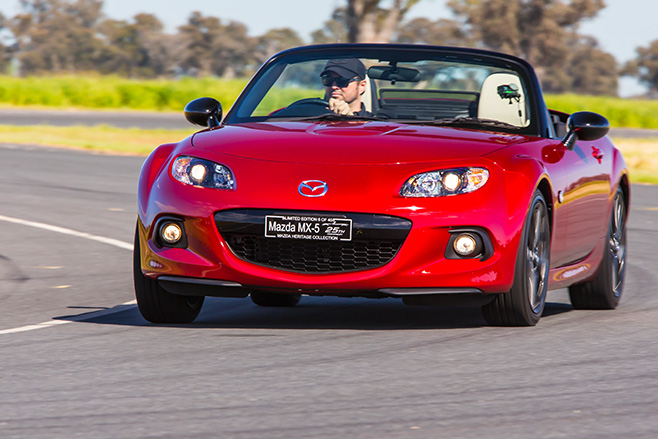 The third generation MX-5 is certainly more luxurious than its predecessors. But in comparison to the NB turbo this model feels a little sluggish.Despite this the NC also won Wheels Car of the Year, in 2005. 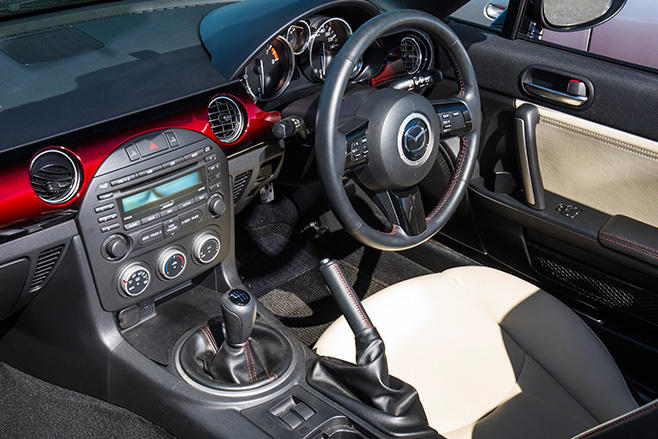 Aaah, that’s more like it –the MX-5 finally returned to its lightweight roadster roots in 2015 with the introduction of the all-new ND series. This fourth generation model has been stripped of excess weight to the point where even a glovebox was deemed surplus to requirements.

As a result the ND is compact and light, just like the original model, but it still feels planted and balanced in tight and twisting turns. You can feel its agility on the track, which was impressive enough to earn the MX-5 its third Wheels Car of the Year Award (2016). 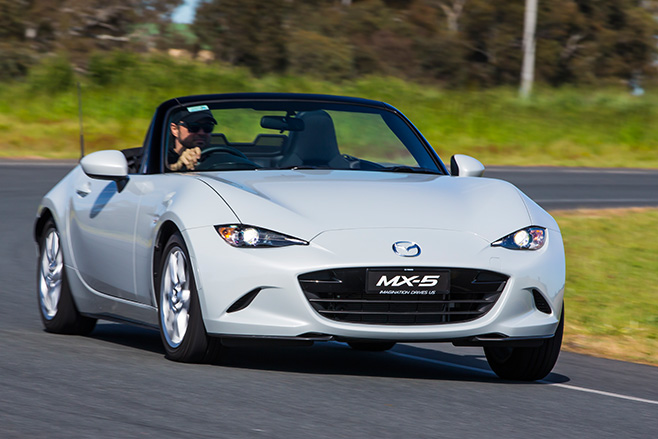 ND Program manager, Nobuhiro Yamamoto, made a special visit to Wodonga from his native Japan. He says the NA is fun to drive, the NB is best for handling, the NC is best for performance and the ND? Well it aims to be a combination of all three - hence last year’s Mazda MX-5 advertisement where the three older variants go into a tunnel and emerge as the ND.

When I push Yamamoto about the possibility of further refining the MX-5 and bringing out a lighter, more dynamic NE he answers: “Yes, definitely!” 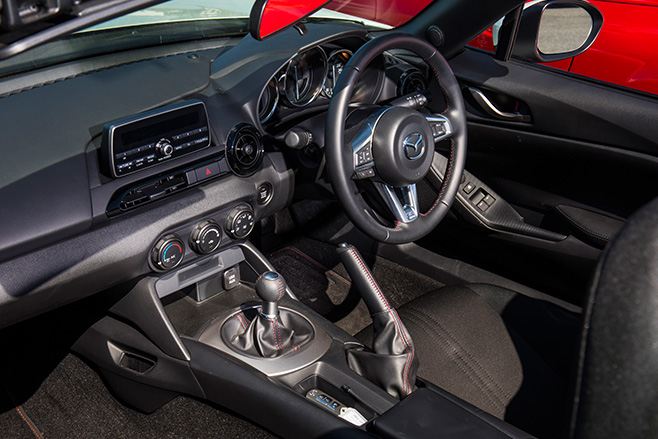 More than 1 million MX-5s have been sold since 1989 and it continues to be the best selling roadster in the world – and it remains a Wheels favourite.

Curiously The Elder NA was my favourite roadster of the day. Sure it’s a little primitive, lacking the safety features and luxury of later models. But something about it is pure. Perhaps I do get a little drunk on nostalgia at family reunions …