Popular, if polarising, but fails to achieve greatness

Twelfth on the grid. P-Last.

It’s not where you want to end up, but I reckon in this case, it’s not a true or fair reflection of the Lexus GS F’s real abilities and place in the world. And let’s not forget, just to make it into a PCOTY field suggests a fair degree of nous in the first place, so winding up at the blunt end of things isn’t as bad as it looks on paper.

Speaking of which, on paper, the Lexus really does look the business. Specifically, that 5.0-litre atmo V8 knocks out 351kW as well as 530Nm at a high-ish 4800rpm. But where such a high torque peak can sometimes make for a frustrating drive, in the Lexus, it simply means you need to rev it up to about 4000rpm and then hang on. Because at that point, the exhaust note hardens, the GS F squats at the rear and just takes the hell off. Oh, there’s plenty below that for just getting around, but if you want to be getting along, then 4000 is the magic number. 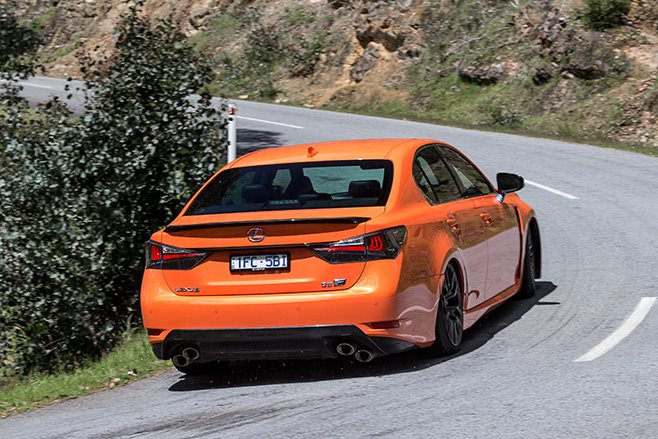 At more than 1800kg, the GS F is no featherweight, but it carries that bulk well and there’s absolutely no doubting the fact that it’s a truly capable platform with a spot-on, real-world blend of balance, ride and handling. It even steers pretty faithfully and although we’d like a bit more weight and substance to the feel of things, the Lexus never fails to turn in and even did a decent job on a properly slick track.

Okay, it lacks that last few percentage points of driver involvement, but that’s what happens when you also opt for a supremely quiet interior and a refined overall demeanour. In fact, the Lexus is a bit like the opposite of the C63 S Coupe; the former trades off blood and guts for silkiness, the latter is the other way around. Neither approach is wrong… just different. And hey, they’re both proper performance cars at the end of the day and worthy of inclusion in this field. 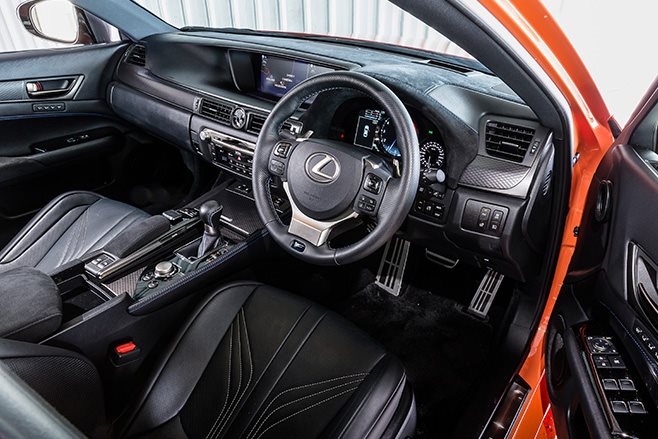 The one thing that will turn a lot of potential owners away from the GS F is the stylistic approach Lexus has adopted in recent years. The front end that looks like an earthquake has hit a trapezoid storage
facility is one thing, but an aftershock has clearly nailed the angle factory next door and there are all sorts of obtuse and acute lines peppered all over the GS’s plastic bits.

Then there’s the mish-mash of an interior. We loved the adaptive digital display with its ghost needles and user-chooser options, but the waterfall dashpad brought a tier (geddit?) to our eyes.
But let’s not forget that the Lexus also provides decent value for money and in isolation (as in, not as part of PCOTY) it would be a serious contender against all comers from a similar price bracket and with a similar brief. 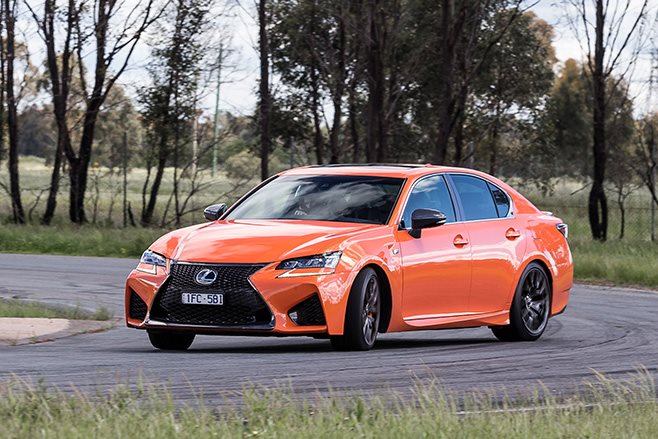 JUDGES' RANK
David Morley: 11th Don’t underestimate the Lexus. If it had an Italian badge, we’d be oohing and ahhing.
Dylan Campbell: 12th Japan cooks up a rear-drive V8 four-door. Result is reliably odd, enthusiastic and likeable.
Scott Newman: 11th Flawed, but full of character and great fun to drive.
Tim Robson: 11th The basic bones are there, but the GS F needs more punch and attitude.
John Bowe: 12th I liked its road behaviour but on a wet track it was dreadful. 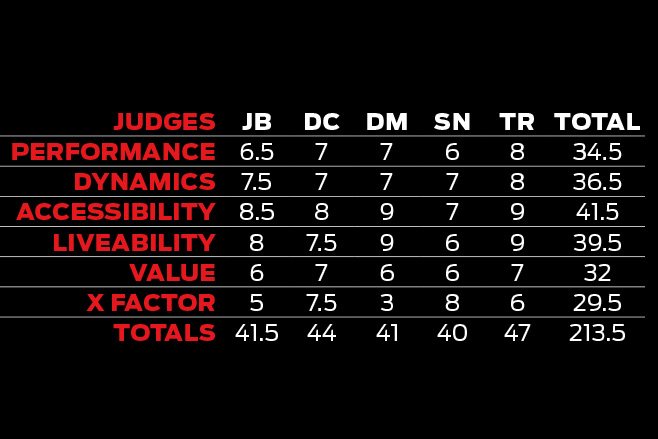