Australia’s best performance tyres tackle five tightly-controlled disciplines in the wet and the dry. Which rubber will reign supreme?

Bugatti’s AUD$4m Chiron hypercar is being held back by tyres – as in, there aren’t any that won’t explode as the brand attempts a 450km/h new production car top speed record.

The engine is there – a 1103kW, 1600Nm gravity-warping quad-turbo W16 – and the aero has been sculpted to the nth degree. Yet proving, as ever, that the four otherwise unremarkable rings of rubber are critical to the performance of a vehicle, there doesn’t yet exist a tyre that can cover the 125 metres per second without Bad Things Happening. Which means that Bugatti’s masterpiece of air-splitting engineering is going nowhere near 450km/h, until the rubber is sorted. 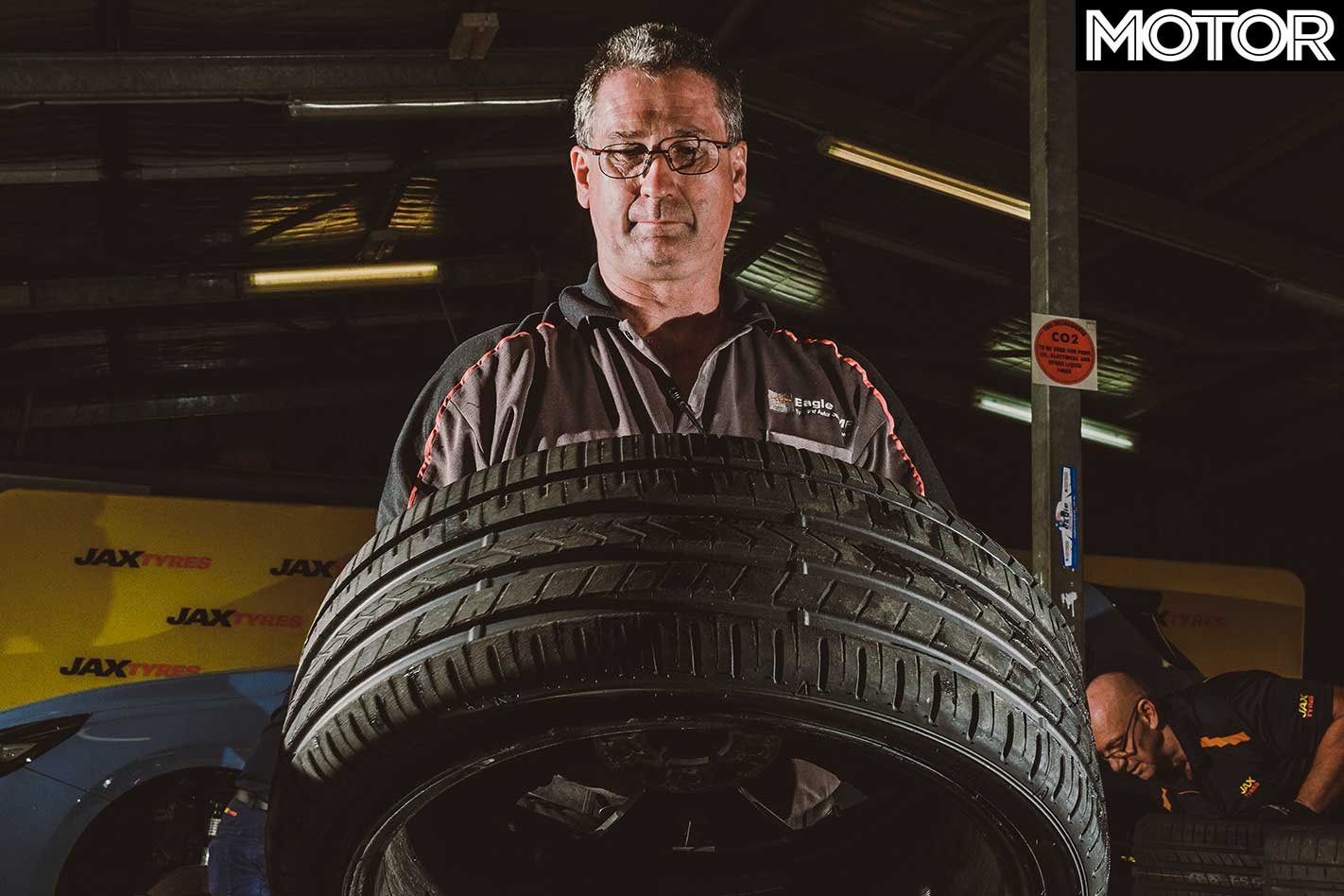 Tyres, as we are all constantly reminded – and learn for ourselves when we are seduced, by price, into buying a set we later regret halfway through the first wet roundabout – are important things. There’s no point paying for premium engineering if the bit connecting the chassis to the road surface is the weakest, dodgiest link. But with all brands telling you they’re the best, who do you believe?

Enter MOTOR’s annual Tyre Test. Every year we host Australia’s most thorough, most controlled performance tyre test to sort the grippy from the slippy. We’ve picked Sydney Dragway again on which to stage shoulderblock-straining tests like a dry slalom, emergency braking stop and motorkhana. We’ll then crank the sprinklers for our wet braking and lateral G disciplines in Sydney Dragway’s gigantic bitumen apron.

For this year’s car, Hyundai has supplied its much-hyped new i30 N. Front-drive, and having done many miles at the Nürburgring, it packs adaptive dampers, an electronically controlled locking diff, trick suspension, and an expertly tuned ESC – and Hyundai promises the brakes can cop a proper pounding. Its 19-inch wheels dictate our test’s 235/35 size, the going fitment for most of today’s fast metal. 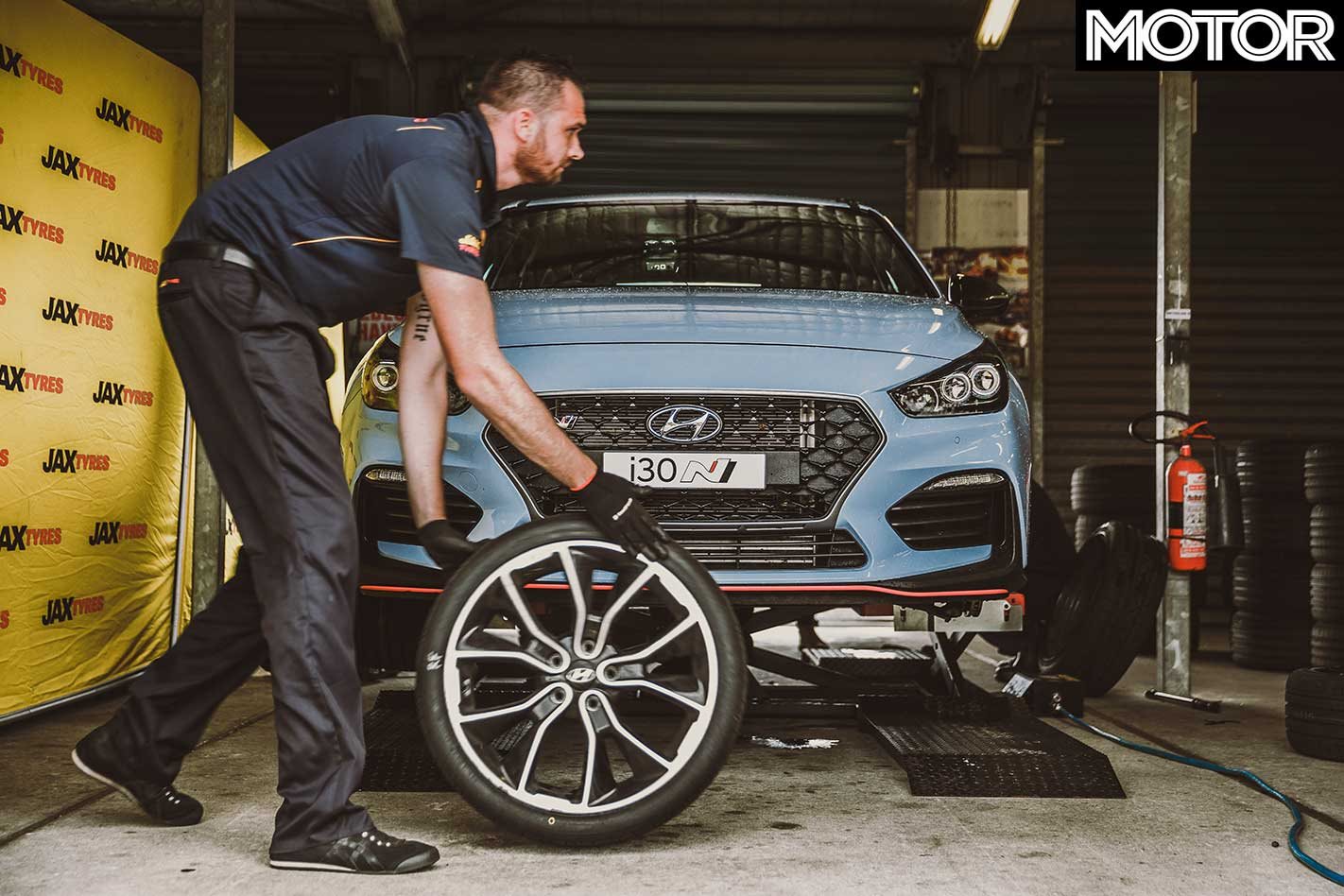 In the name of science and all things fair, we’ll test the Hyundai on its stock rubber (special ‘HN’-specification P-Zeros) at the start, middle, and end of the day, which spits out a linear regression formula we use to adjust every tyre’s performance, accounting for changes in variables such as ambient and surface temperature, the car and driver. It generally turns out to be very minimal, but fair is fair.

Warren Luff, MOTOR’s gun driver and Supercar hot-shoe, is Our Man – the best in Australia for testing tyres, with more than a decade’s experience doing so. Although some brands couldn’t put their rubber on the line, or didn’t want to (cough, Michelin – a real pity we couldn’t include the new Pilot Sport 4S) it hasn’t stopped us from gathering the best tyres on sale.

Originating from Italy to Indonesia and everywhere in between, they represent the market’s wide range of prices and, as we’ll see, performance. See the line-up for yourself in our panel on the right. And with all that out of the way, let’s get on with it. 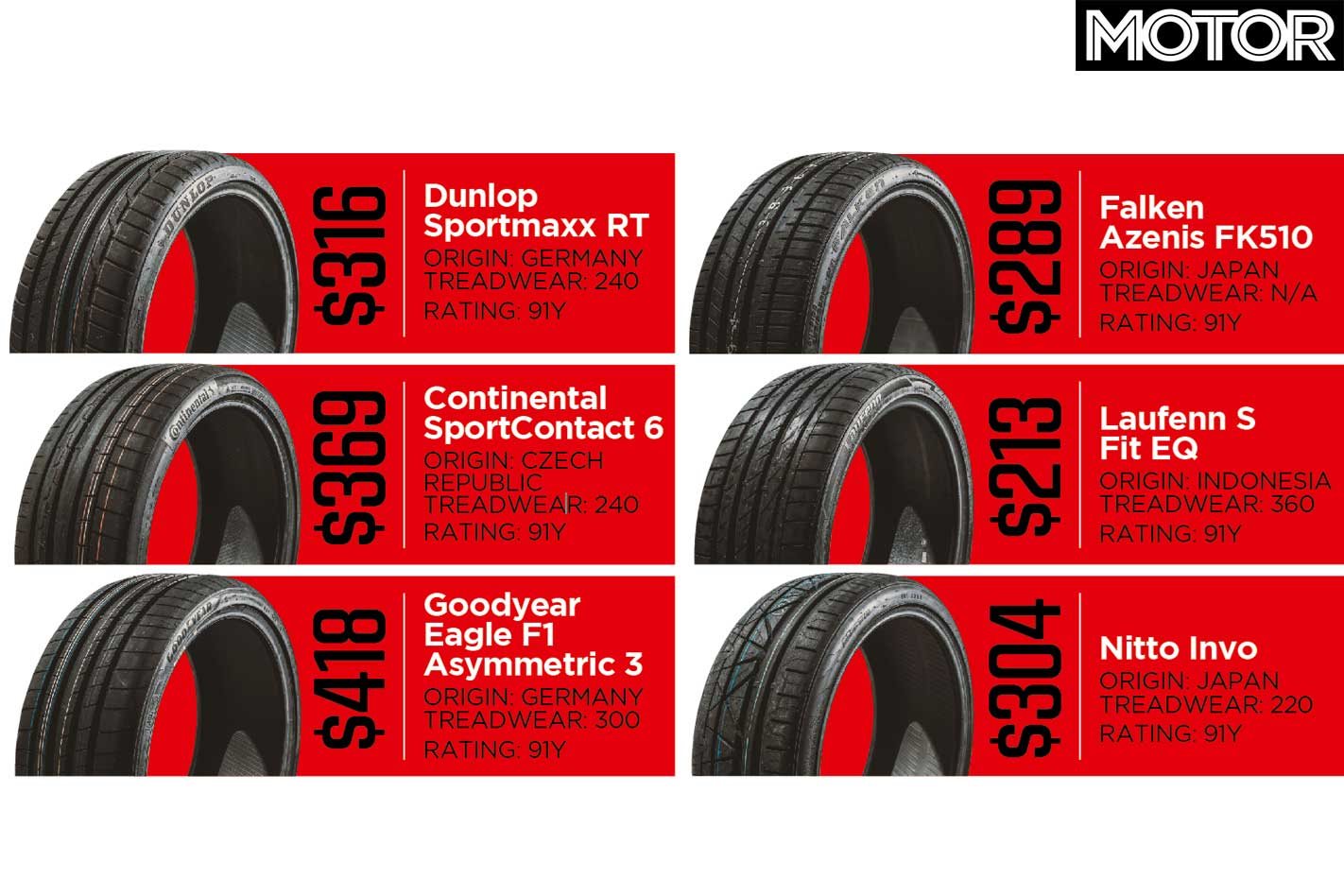 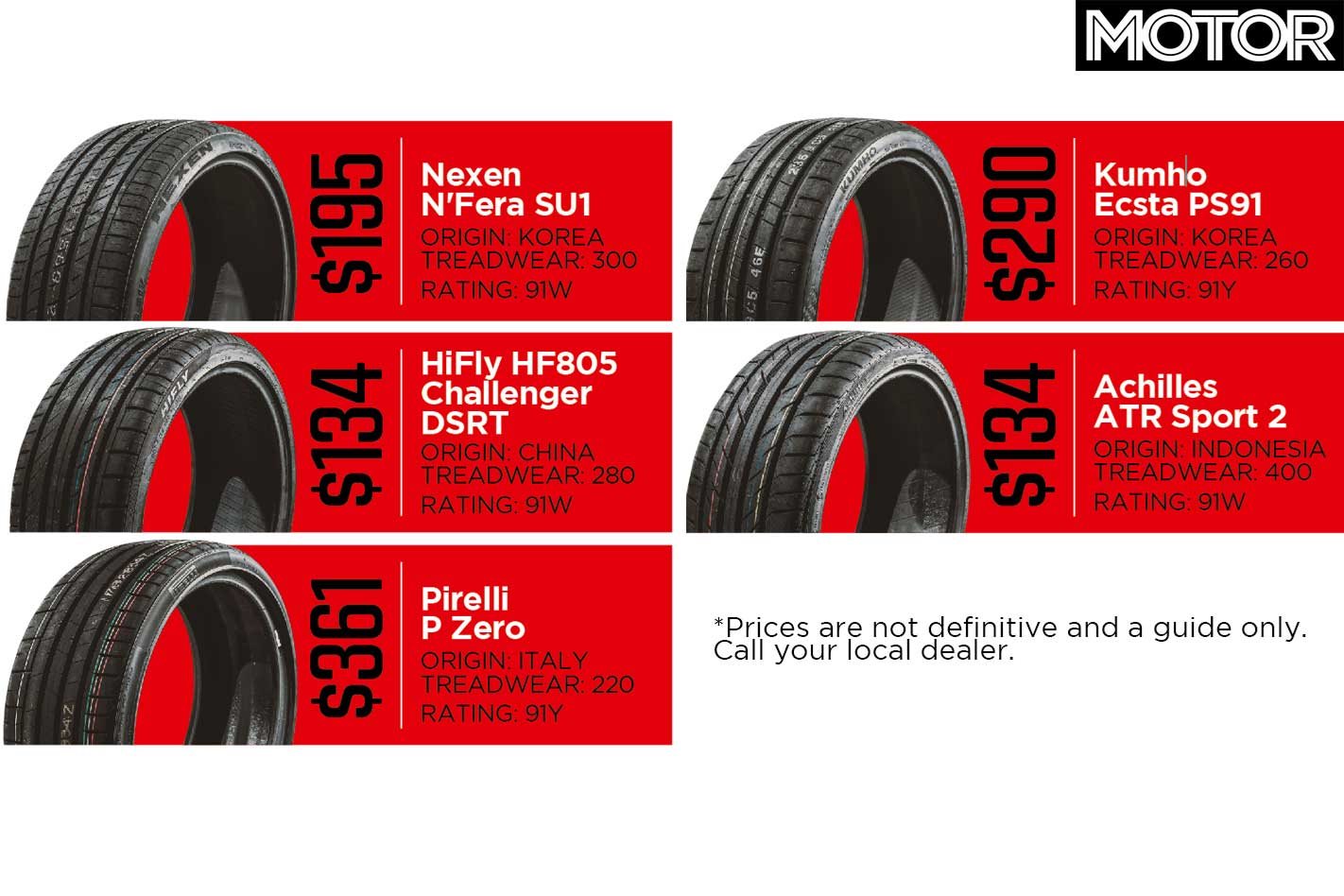 JAX Tyres, The Dream Team
One very big thanks 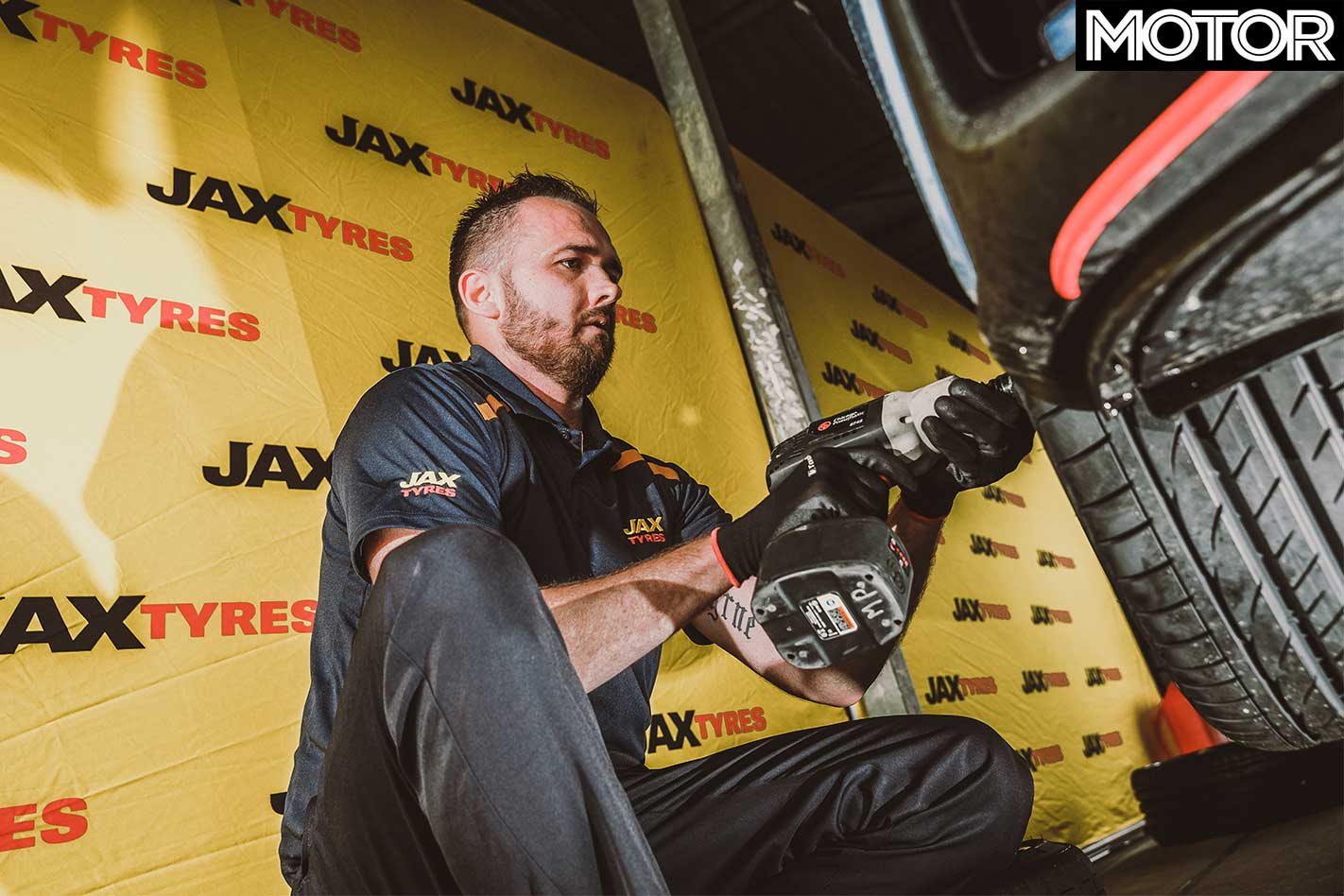 F1 pit crews are slick, but they rarely do half the 15 tyre changes MOTOR’s Tyre Test requires in a day. That’s why we partner with JAX Tyres every year for logistical and tyre-changing support during our Tyre Test.

Not only can they talk the treadwear talk and shoot the speed rating breeze, but they can get through the 60 single wheel swaps quicker than we can serve them. Each wheel is bolted back on to exact torque ratings, tyres are pre-marked for their correct corner, and pressures are set exactly as placards say.

Of course, you’re only as good as your tools, and no sidewall can defeat the Eagle SMF equipment and its operators, also on hand to help us out. So next time you’re up for a tyre change make sure you head over to jaxtyres.com.au or give them a bell on 1300 367 897. Tell them we said thanks. 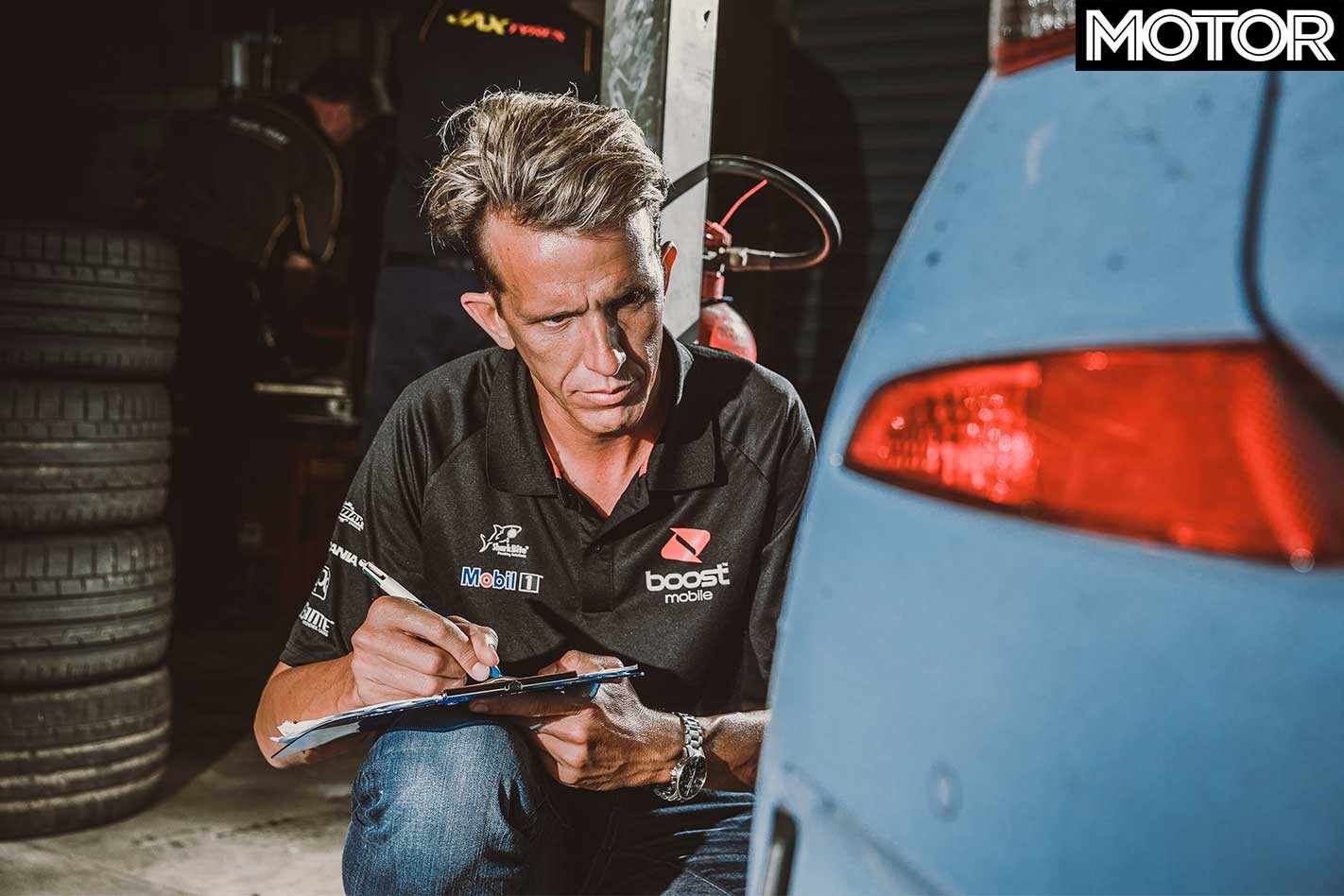 He drives Supercars and Time Attack machines, but outright speed and ability isn’t the only reason Warren Luff is our go-to when we need to know how fast something really is. It’s his ability to contribute insightful impressions about equipment that makes the Luffster invaluable to our operations.

His lap times are almost metronomic. On the Laufenn during the motorkhana he bung in two identical lap times and then trailed by only one tenth on the last. And standing as proof that he’s been in the thick of the world’s toughest endurance racing, you won’t catch him wasting a second out of the car, either.

He’s always doing what he can to keep the Tyre Test, a machine of many parts, ticking along smoothly. Keep an eye on the lightning quick legend we call Luffy on Facebook, Twitter (@wazzaluff) and/or Instagram (@luffy76).