This article was originally published in issue six of Street Machine Commodores.

Believe it or not, this beaten-up old car is one of the most heroic Holdens of all time. It only raced once, but beat all comers – including two other Holden Commodore entries and a team of factory Ford Cortinas – and established the then new-fangled Commodore as a car to be reckoned with. 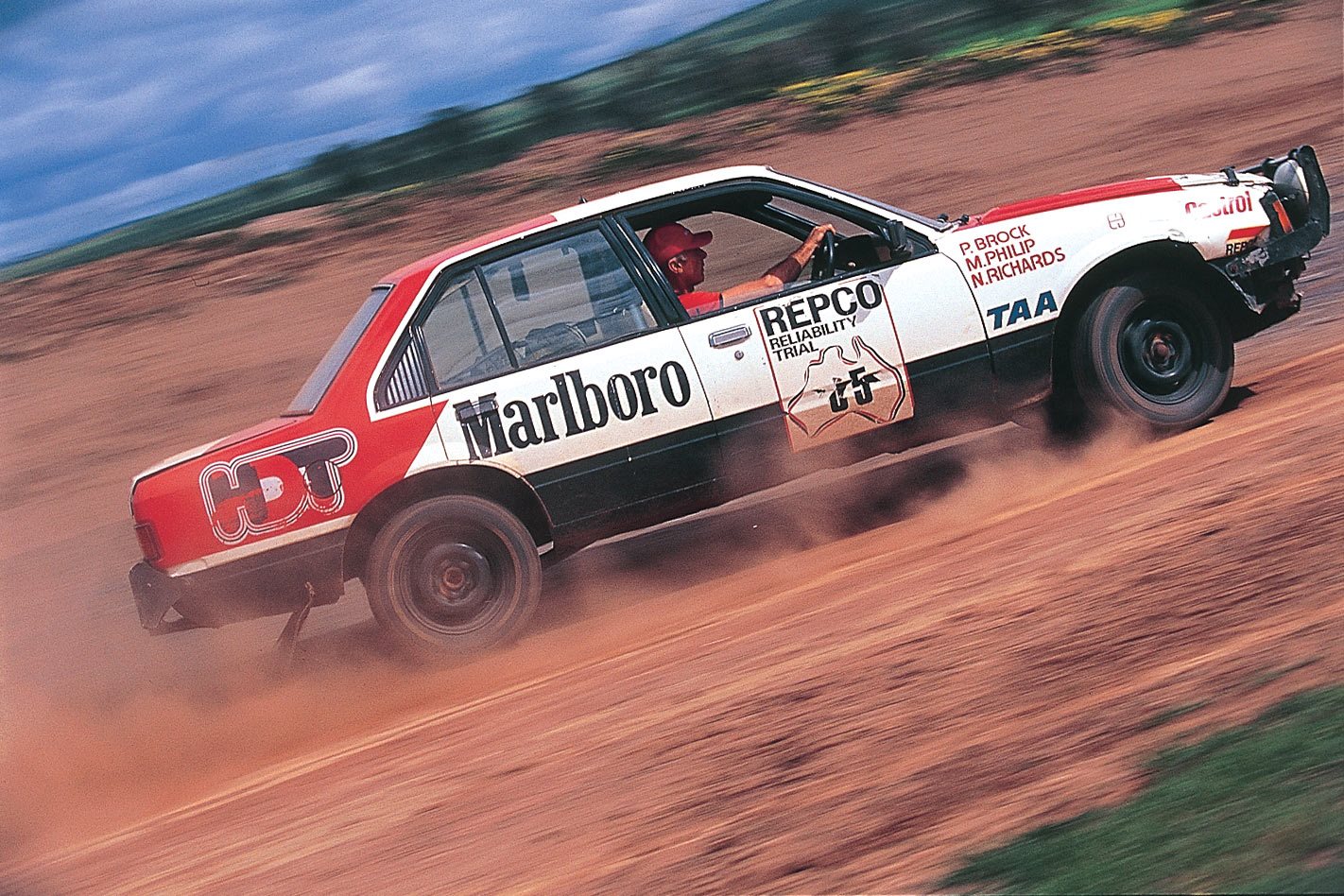 It is, of course, Peter Brock’s 1979 Repco Round-Australia Trial VB, the car in which he, co-driver Matt Philip and navigator Noel Richards drove 20,000 kilometres in 14 days – sometimes for up to two days non-stop – through some of the most inhospitable Australian outback territory imaginable. 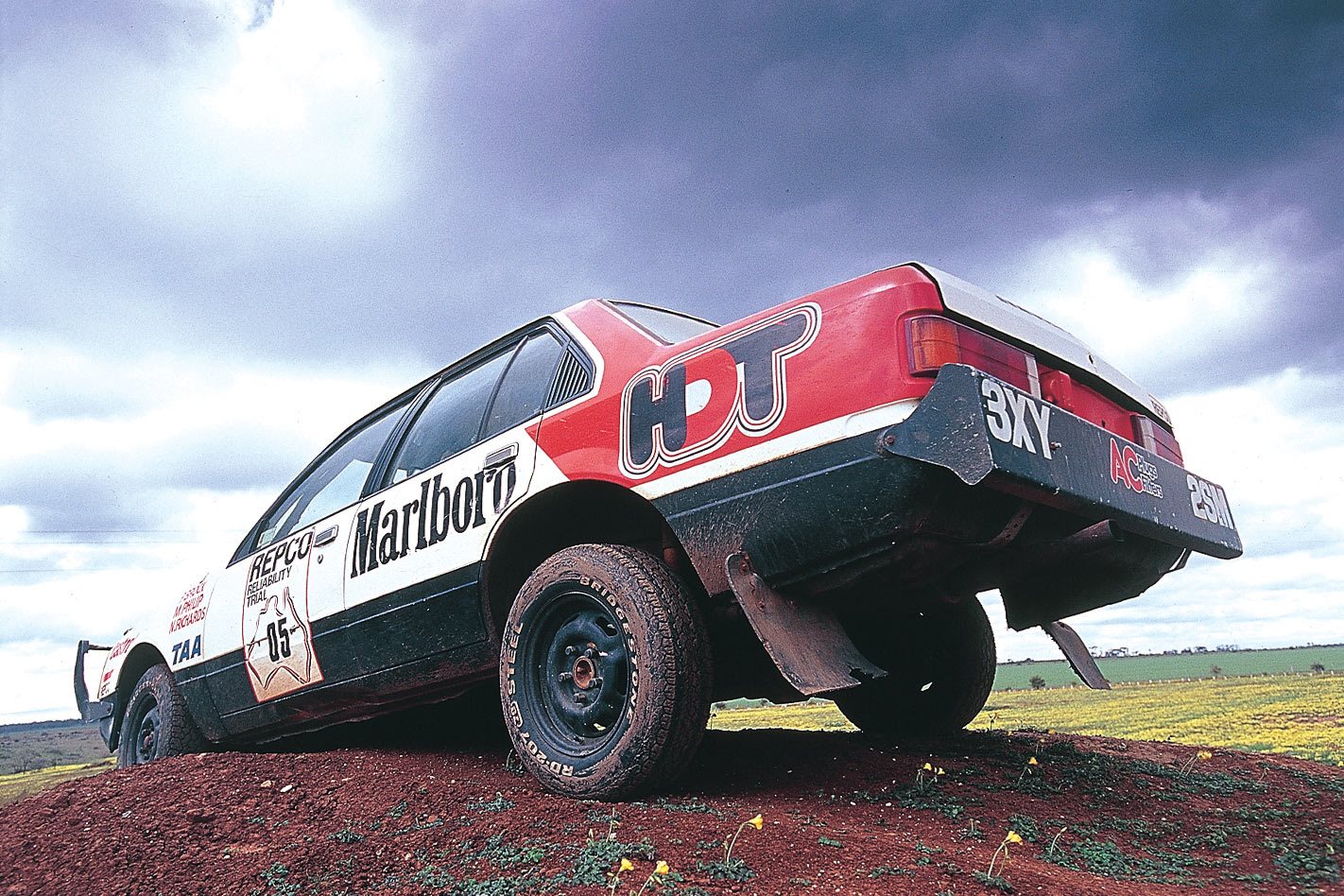 This was survival of the fittest – both mechanical and human – and it took a specially prepared car and superhuman effort to bring it home in one piece and in first place. The car you see here has not been touched since ’79, and is still covered in the road grime and bulldust that was baked onto it a quarter of a century ago.

Brock, already a touring car star in ’79, but not rated at all by the rally specialists of the day, drove all the competitive stages and most transport stages to ensure a high average speed. It’s no surprise that he still rates it as his greatest drive ever. 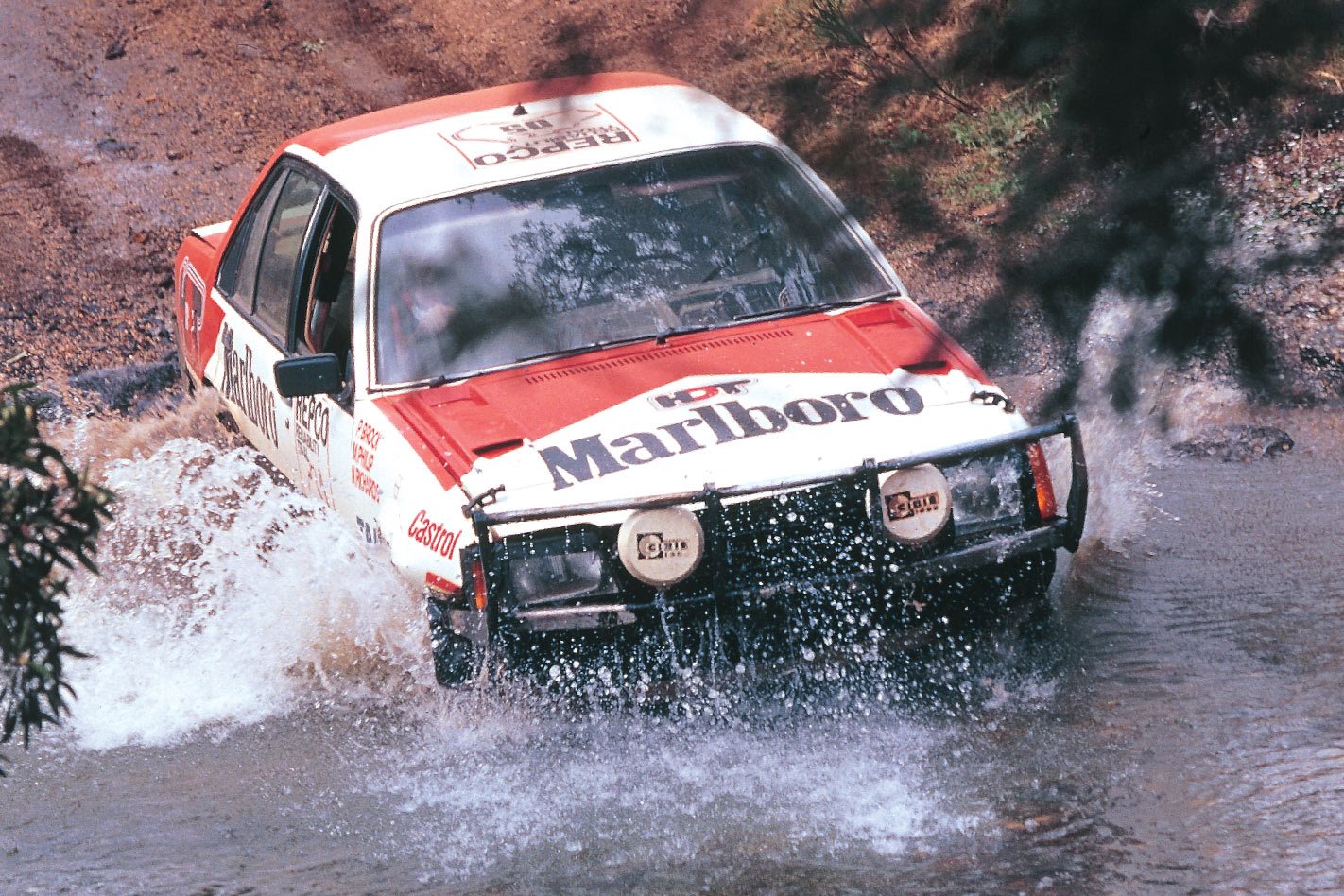 The brains behind Holden’s Repco assault was ace rally driver and car builder, George Shepheard – and it all began with a fang at Lang Lang.

“The whole thing started at a release of the Commodore at the Holden Proving Ground,” Shepheard recalls. 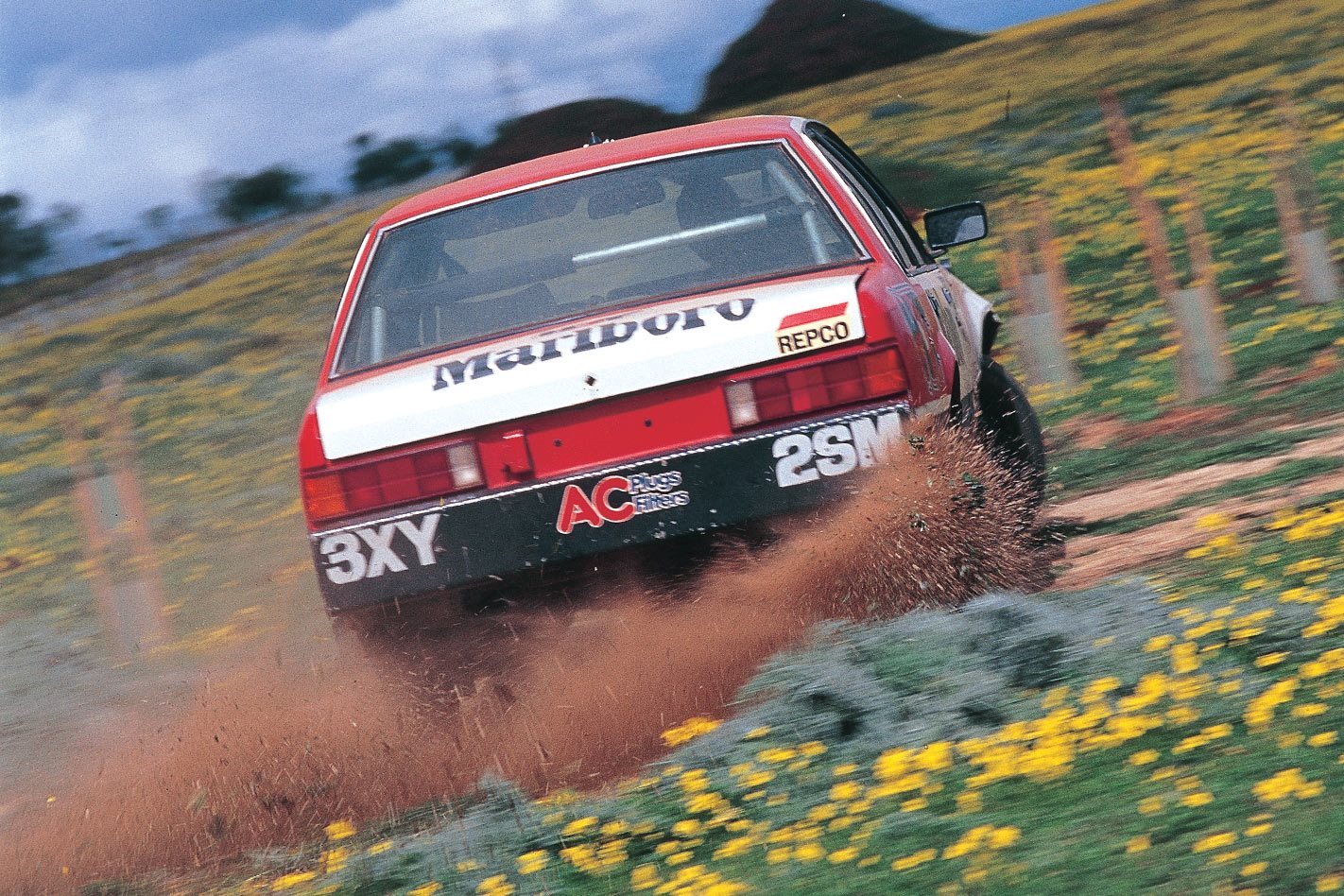 “At that time [recently departed Holden chairman and managing director] Peter Hanenberger was in suspension, as was Ray Borrett [now Holden’s director, Performance Vehicles and Racing]. During our fanging around in the dirt, Brock looked at me and said, ‘We should try and get them to take one of these in the Round-Australia Trial – what do you reckon?’ I said, ‘I was about to hit you with the same thing!’ That’s how it started.”

Shepheard was given the job of preparing three identical cars, the second to be driven by local aces Barry Ferguson and Wayne Bell with Dave Boddy; the third by international stars Shekha Mehta and Rauno Aaltonen with journalist Barry Lake. 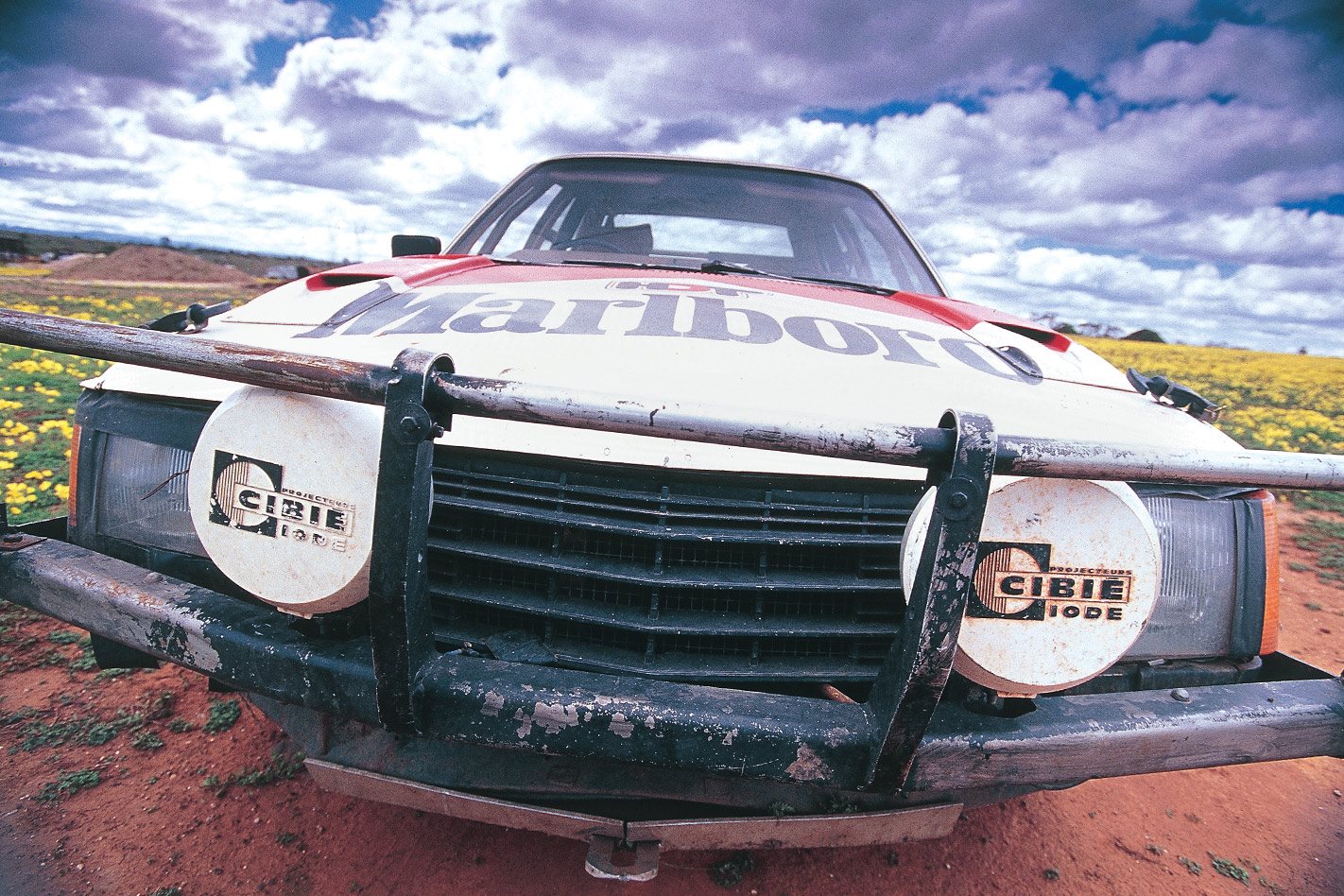 Holden sent an old pilot-build Commodore for Shepheard to turn into a prototype and he soon ruled out the idea of using V8 power.

“Everyone [at Holden] was pushing for a V8. They sent up a six-cylinder pilot car and a V8 to be slotted in,” Shepheard says. “But I wasn’t convinced an eight was the way to go because it added an extra 120kg over the front axle. The six was a good little engine and it would be easier to get parts [around Australia] for it because we wouldn’t be able to carry them all.” 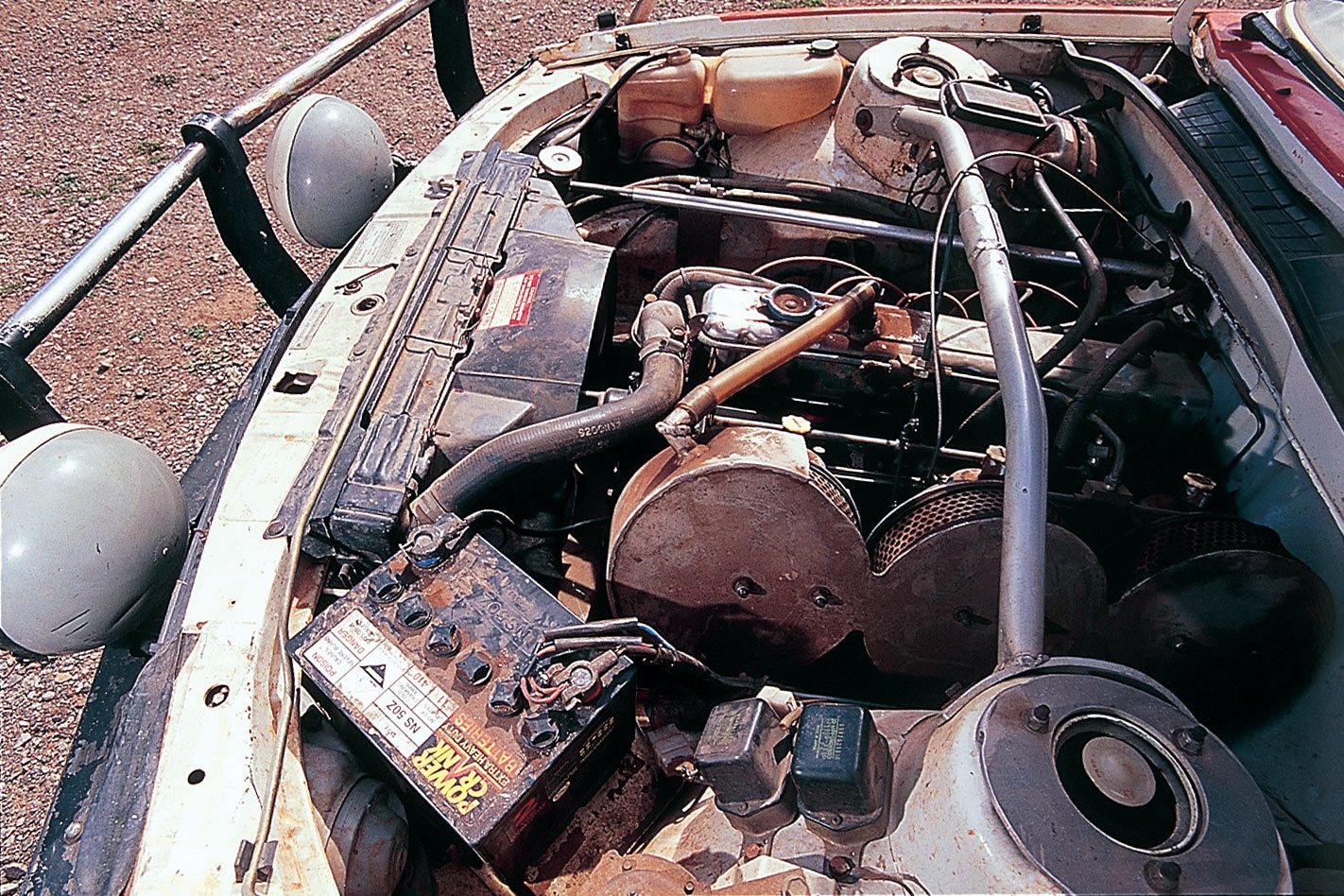 A set of triple SU carbies and some other goodies turned it into basically an XU-1 engine and it pumped out 215 tough, reliable horsepower (160kW).

“That engine was a known factor. Colin Bond and myself had won three or four national titles with it, and we knew that if we put it together the way Harry [Firth] had done it, it wouldn’t be a problem.” 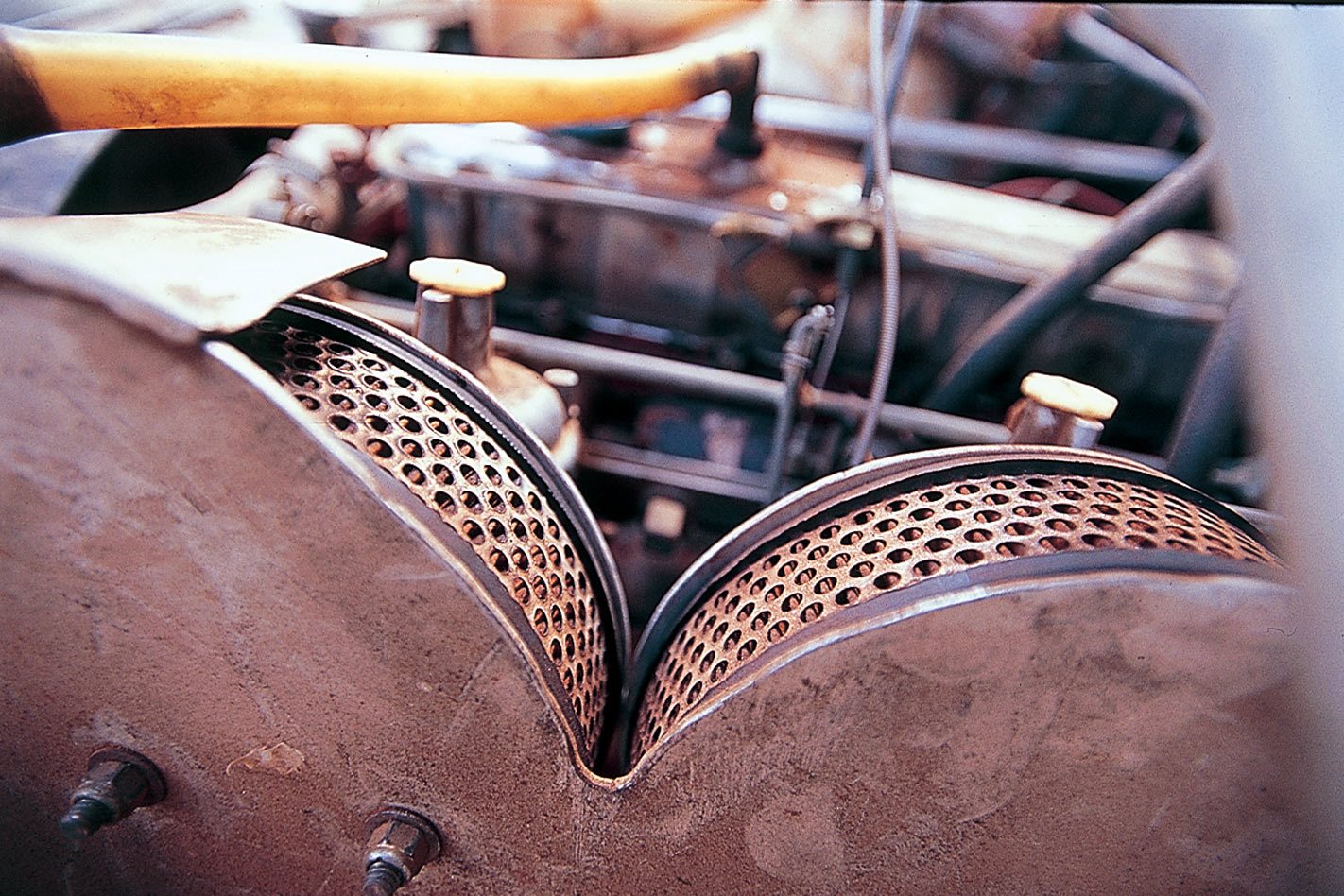 ‘Old Silver’, as the pilot car was dubbed, was built “very basically” and tested by newcomer Wayne Bell.

“We found the car to be pretty good,” Shepheard remembers. “We took it to the Bega Rally and gave it a fang. It went very well, and the (final) decision was made to go with the six.” 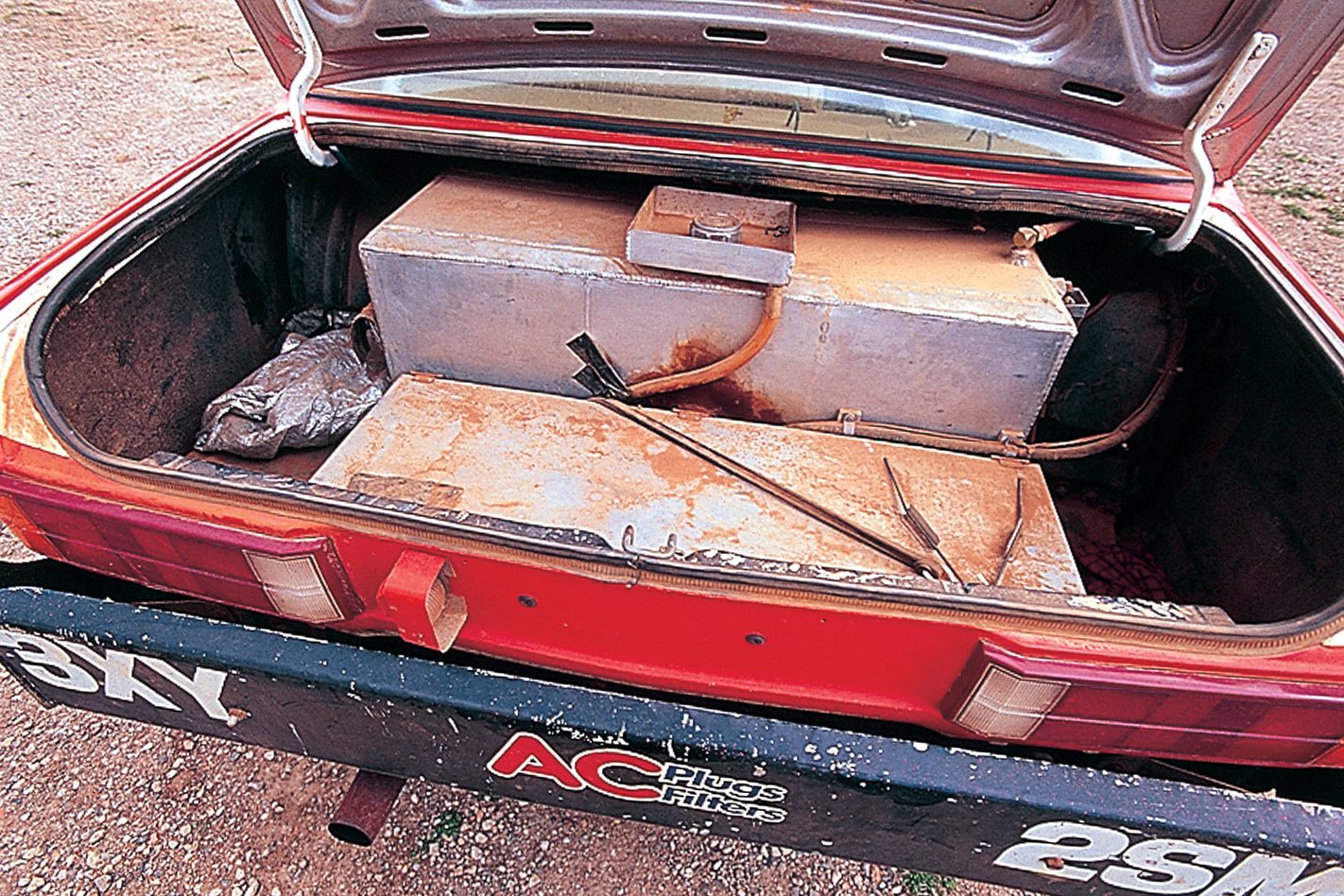 The car was then stripped to a bare shell and suspect (weak) areas in the chassis refined and referred to Holden engineering. Holden had underestimated how tough the rally would be, but Shepheard hadn’t.

“We had some strong discussions with Holden about the level of rally preparation the car needed. Engineering considered the car was good enough to complete a rally with just a sump guard and some lights. I told them we’d only make fools of ourselves.” 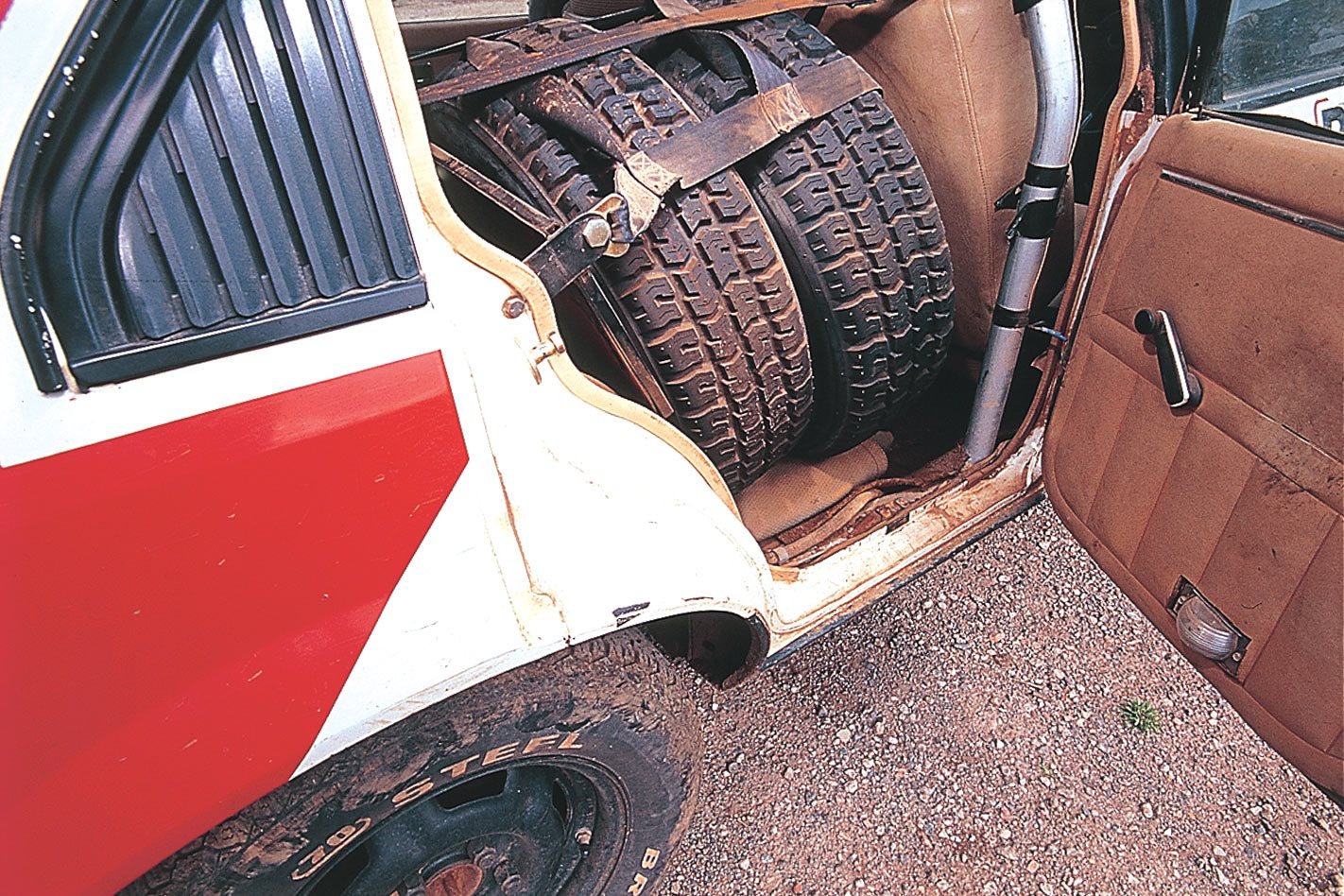 The Commodore bodies were stitch-welded on Holden’s Dandenong production line, and extra brackets were added so that when the cars came off the line, they were ready for Shepheard’s rally mods to be bolted on.

There were ‘discussions’ about suspension too. 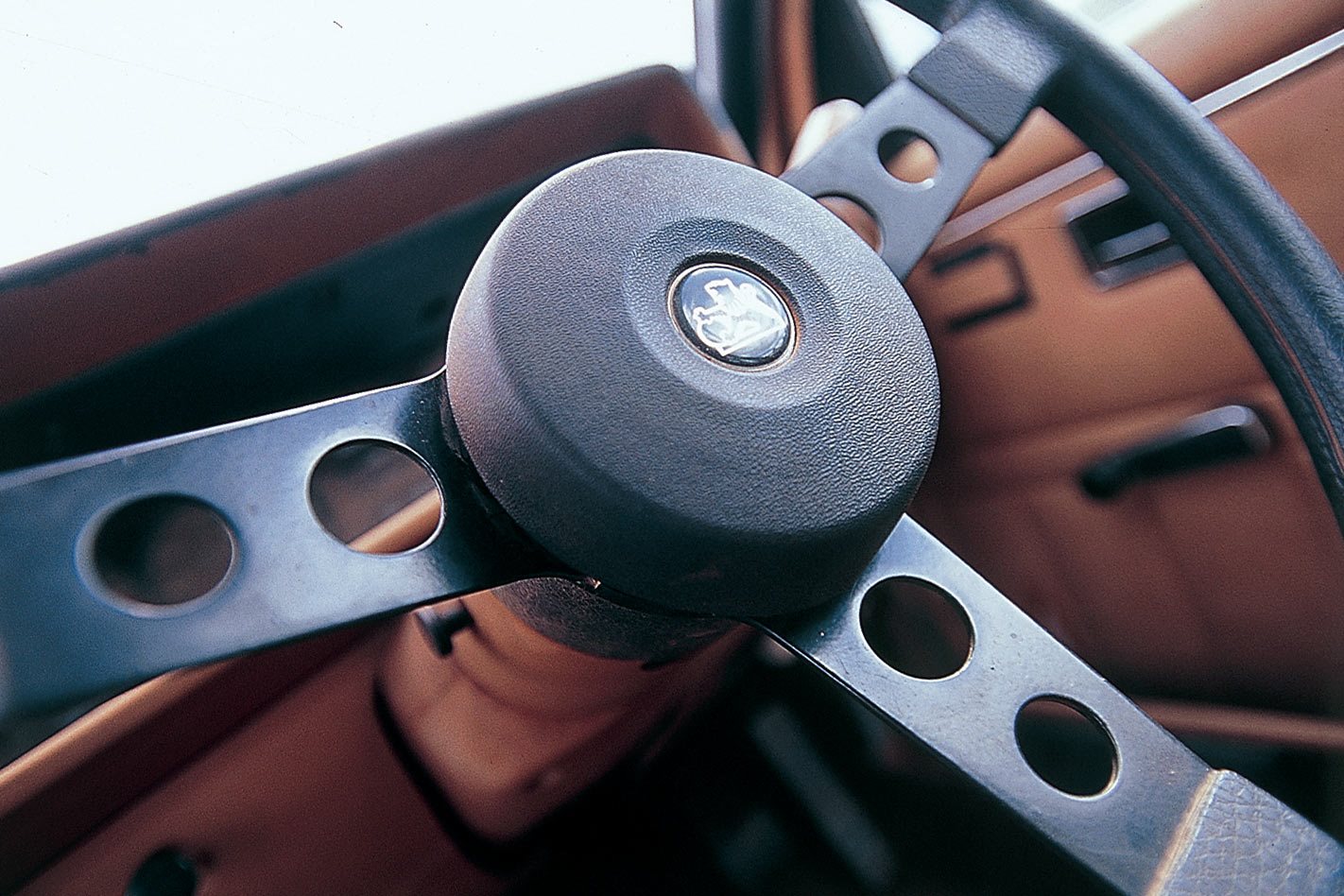 “Peter insisted that the original FE2 suspension – done by Monroe and refined by German engineers – would do the whole rally, but I said if they were going to do that I didn’t want to go ahead with the cars.”

Shepheard set up a back-to-back test to compare Holden’s suspension with what he thought the car needed. “The cars did six runs on a 10km course and the [Holden)] shocks threw in the towel. The car was bouncing up and down and all over the place. Then we bolted in a prototype of our suspension and it did 10, 20, 30 runs. The Holden engineer backed our suspension.” 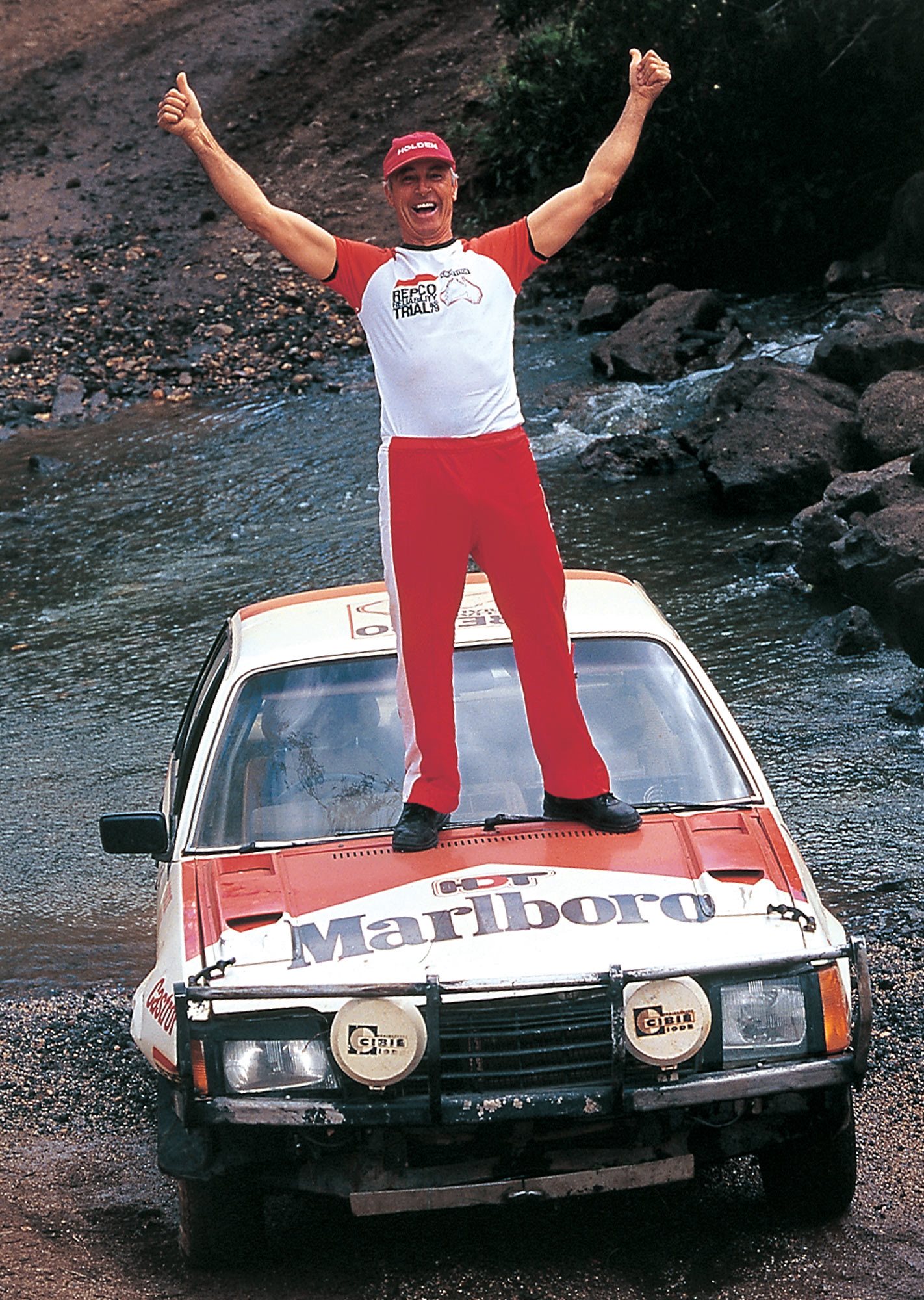 In its final spec, the car ran a close-ratio M21 four-speed manual transmission and a Detroit Locker diff with a 3.55:1 ratio. The brakes were stock Commodore discs with specially developed Ferodo pads. The stock 14x6-inch rims were heavy-duty items that had been pinched from a Holden commercial vehicle. Bridgestone came up with a strong 195/70R14 tyre. Two spare wheels occupied half the back seat.

A huge 160-litre fuel tank dominated the boot, and there was the requisite bullbar with Cibie driving lights, the angle of which could be cleverly altered on the run by a crank handle mounted on the dash. Inside the basically standard cabin were a bolt-in aluminium roll cage, Halda trip meter, CB radio, sports steering wheel and Scheel sports seats with four-point harnesses. It wasn’t exactly a pretty sight, but it did the job. 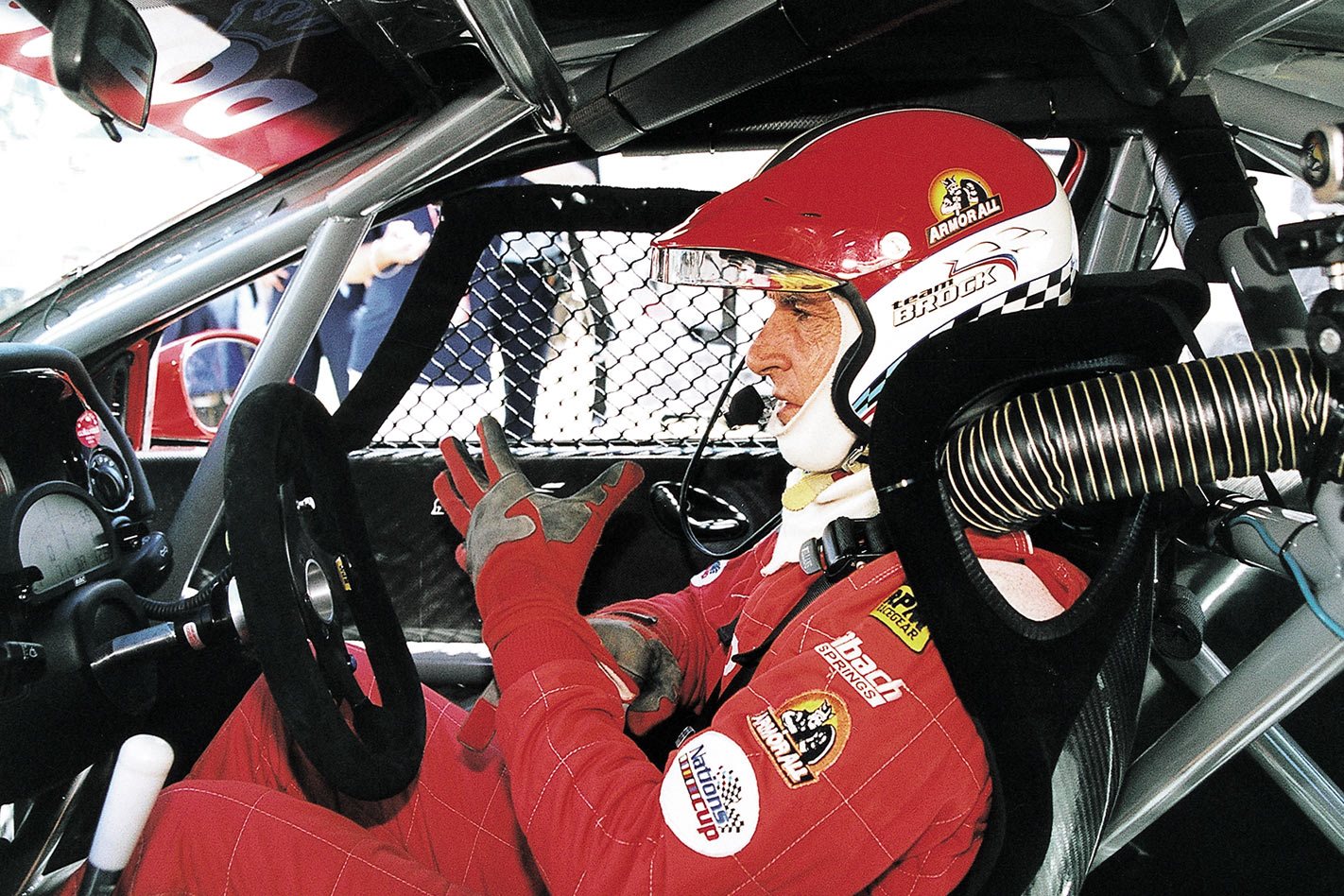 Shepheard has nothing but praise for Brock, who proved all the rally pundits wrong by not crashing out on the first day. He went on to stun the lot of them by winning the whole thing.

“Peter was chomping at the bit to go, but a lot of people considered he was going to be a ‘tar baby’ and not be able to hack it,” Shepheard laughs.

“But having been with Peter on the dirt – he drove our [rally] Geminis and Kingswoods – I was sure he could do the job. It was just a matter of us building a car strong enough for him, because Peter would take 100 percent of what we gave him. That’s not saying he was too hard on a car, but the way to win this rally was to build the car as strong as we possibly could.” 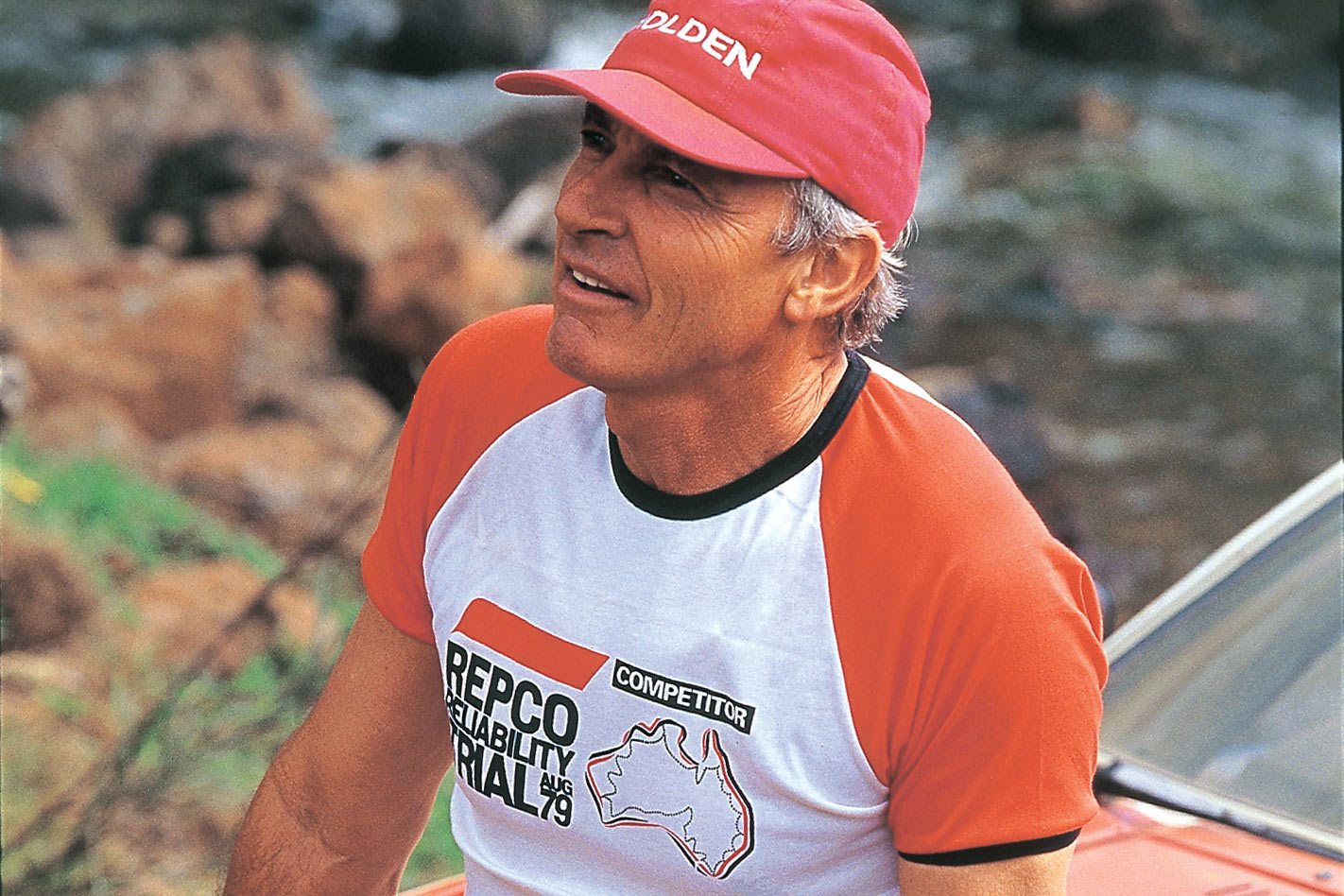 There’s no doubt that Brock had one tough old nail of a Commodore to get him home.