We tested 10 of the biggest sellers in Australian sedans to see which is the best of the current crop.

The rise of the SUV may have impacted the sedan’s dominance but the traditional family car isn’t dead yet. With new technology, spacious interiors and more economical engines, the family sedan still offers a sweet package for anyone who wants to combine practicality with a superior driving experience. With the two-horse race between Ford and Holden consigned to memory, Wheels gathered the 10 biggest sellers and put them through their paces to see which was king of the road.

Deserves to be the benchmark of its segment.

Plus: Smooth; quick; efficient; composed; comfortable
Minus: Not quite as dynamically polished as it could be 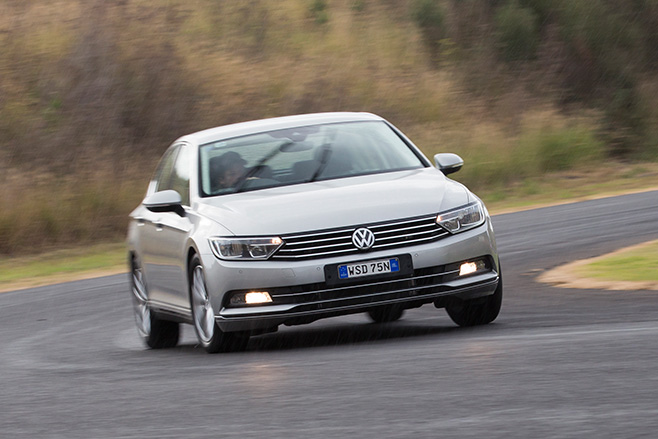 The accomplished Passat ticks most boxes including excellent efficiency, smooth performance and a classy interior that makes it a pleasure to drive. Its 1.8-litre, four-cylinder, turbo-petrol and seven-speed dual-clutch combo makes for easy and effortless motoring. Passengers are looked after with air-conditioning controls and vents in the back and while rear headroom isn’t the best in class, the cabin is a pleasant place to be.

With Falcon production now a memory, it’s finally time for the underrated Mondeo to shine. 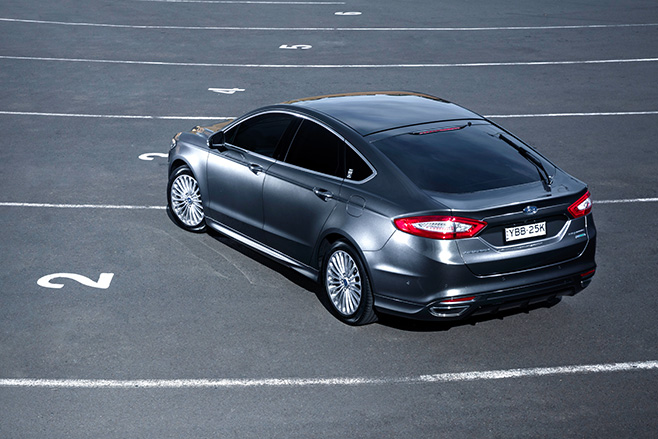 Buyers who would have traditionally flocked to the home-grown Ford Falcon will be pleasantly surprised by the Mondeo’s handling, space and polish even if the dashboard isn’t the most intuitive. The 177kW 2.0-litre four-cylinder turbo provides decent grunt while effortless cornering and taut body control are enough to appease the staunchest rear-wheel-drive advocate.

The old-school Aussie favourite still has a place in today’s market with plenty of space, comfort and obliging performance. 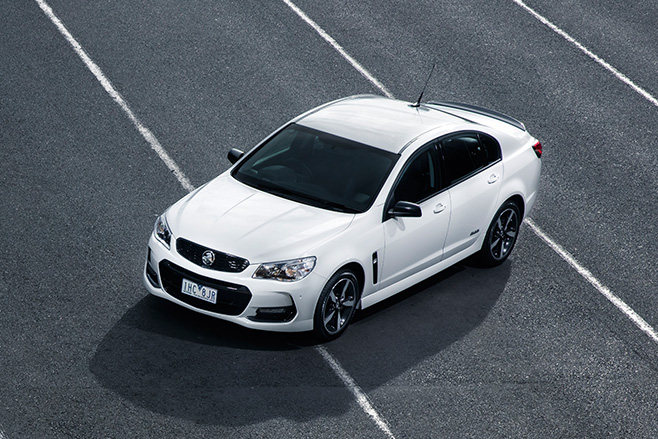 One of the roomiest sedans with a rear middle seat that accommodates more than a child or armrest, the Holden Commodore is only beaten for legroom by the Skoda Superb. It’s a good looking car inside and out and comes with plenty for the circa-$40k price. It shows its age under the bonnet with a big V6 that sucks more than 11L/100kms without the aid of a turbo, though it’s a pretty faithful servant when you put the foot down.

The big Czech saloon could ably fill the Aussie-sedan void if better tuned to Australian conditions. 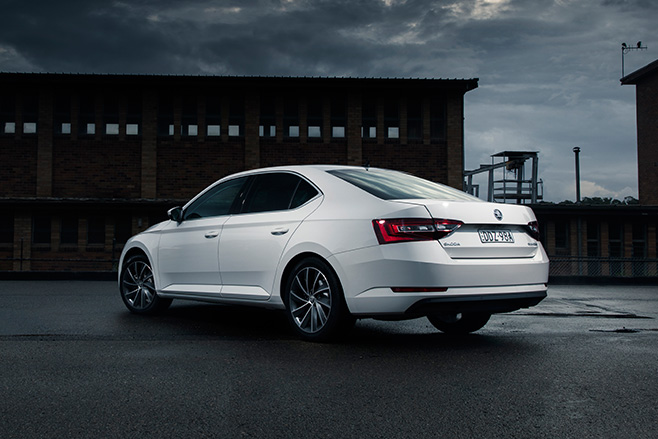 It was bold of Skoda to call its big sedan the Superb, but you can’t really accuse the Czech company of irony as it’s quite a good car that should gain a higher profile here once the Commodore starts arriving by ship. Interior space is more Statesman-like than Commodore, yet its 2.0-litre four-cylinder turbo drinks just 8L/100kms, which is about seven schooners less than the Commodore SV6. It’s a smooth operator on urban roads but its soft suspension leaves it wanting out of town.

A good-looking, features packed all-rounder that’s let down a little by a lack of handling finesse. 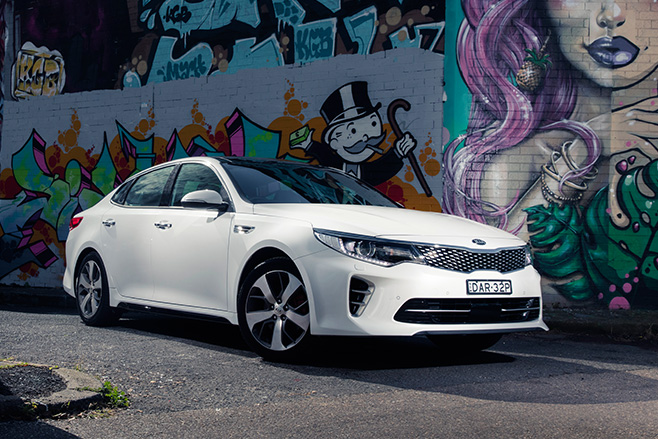 Even those yet to be convinced that Korean cars are actually pretty good can’t help be impressed by the equipment levels in the $46,000 Optima including the leather seats, dazzling but intuitive dashboard, heated steering wheel and cornering headlights. It’s roomy and feels relaxing to drive and sticks to the road well in all conditions but while it provides a nice smooth ride on well paved roads, it does lack composure in rougher conditions.

The conservative lines of this reliable mid-sized French sedan have improved with age. 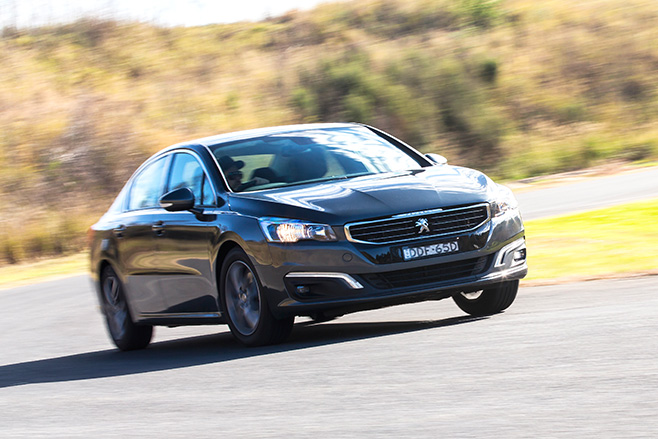 First introduced in 2014, this isn’t as flashy as some of its competitors, yet its clean lines and unpretentious interior give it a timeless appeal. That said there are enough features to please and it’s unique enough to stand out at the lights. Its narrow body means a tight fit for three people in the back seat, but on the plus side it handles nicely and its economical 1.6-litre four-pot turbo engine pulls it along well.

Not the pick of the Mazda 6 range, but still a good looker with great passenger comfort. 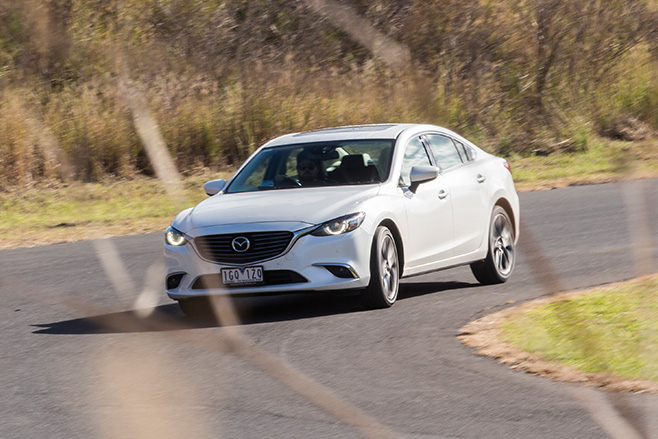 While it’s surprising to see the Mazda 6 this far down a list, the 2.5-litre, four-cylinder petrol engine sedan doesn’t tick as many boxes as the turbo diesel wagon – but we’ll save that one for another comparison. While it’s one of the older designs here, it’s still a good looker with a quality interior that’s particularly comfortable for back-seat passengers. The 6-speed auto doesn’t always shift when it should on windy roads, though this can be overcome by using the paddles that for a more engaging drive.

Great value and comfort is let down by unsophisticated handling on wet and rough roads. 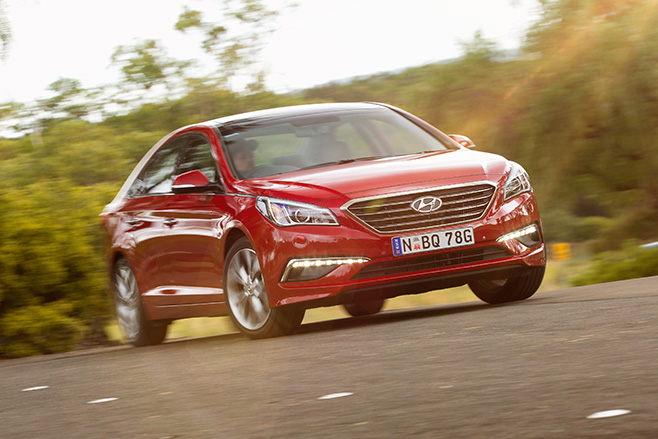 The Sonata has conservative looks that neither offend nor impress leaving its best sales pitch to the well-equipped and spacious interior and a host of features seen in cars priced beyond the Luxury Car Tax threshold. The 180kW/350Nm 2.0-litre turbo four provides more than enough grunt and while handling is great on smooth city roads it’s a bit of a mess on rougher surfaces that’s not helped by the choice of stock tyres.

A good value car that lacks all the charm of previous models.

Plus: Price and equipment; grip and handling poise
Minus: Lack of charisma; dull steering; irritating ride 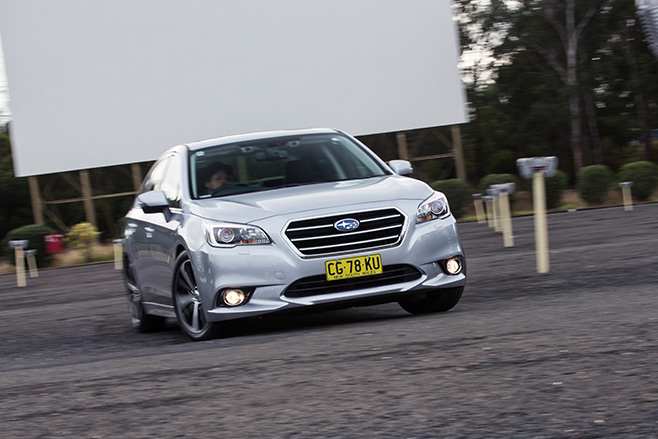 There was a time when a Subaru Liberty offered something different to other sedans, but while it still has AWD as a point of difference, the latest model is let down by sausage factory aesthetics, dull steering and a 2.5-litre boxer engine that doesn’t seem at all interested. The interior looks good and is put together well, though you sit on the firm leather seats rather than in them. The sub-$40k price tag represents good value when you take into account Subaru’s good build quality, equipment and reliability.

The hybrid price tag is difficult to swallow with a budget interior that only a taxi driver could love. 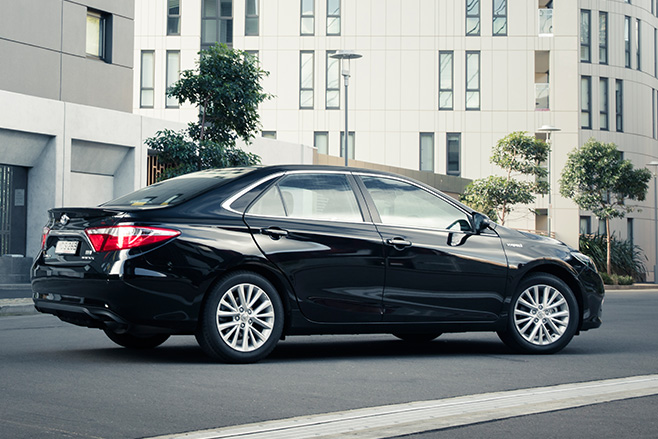 This Aussie-built Camry has great underpinnings, but almost everything sitting above this variant is outclassed by the rest of the cars on this list. The mid-$40k price-tag might be easier to justify if the batteries helped significantly improve fuel economy, but the 9.1L/100kms consumption was hardly class leading – though to be fair it’s very thrifty in town. It does feel nice to drive, though, thanks to the muscular petrol-electric drivetrain and effective suspension tune.