A top 10 place in this company is pretty good going, especially when you’re packing about a third of the horsepower of something like the Audi or the Infiniti.

Then again, at $25,490 even if the bang isn’t so huge, the bucks thing is even smaller (the smallest here, by a long chalk). It’s also a fact that the Swift Sport doesn’t feel bargain-basement. Quite the opposite, in reality, and that cabin looks and smells decidedly better than the price tag would suggest. 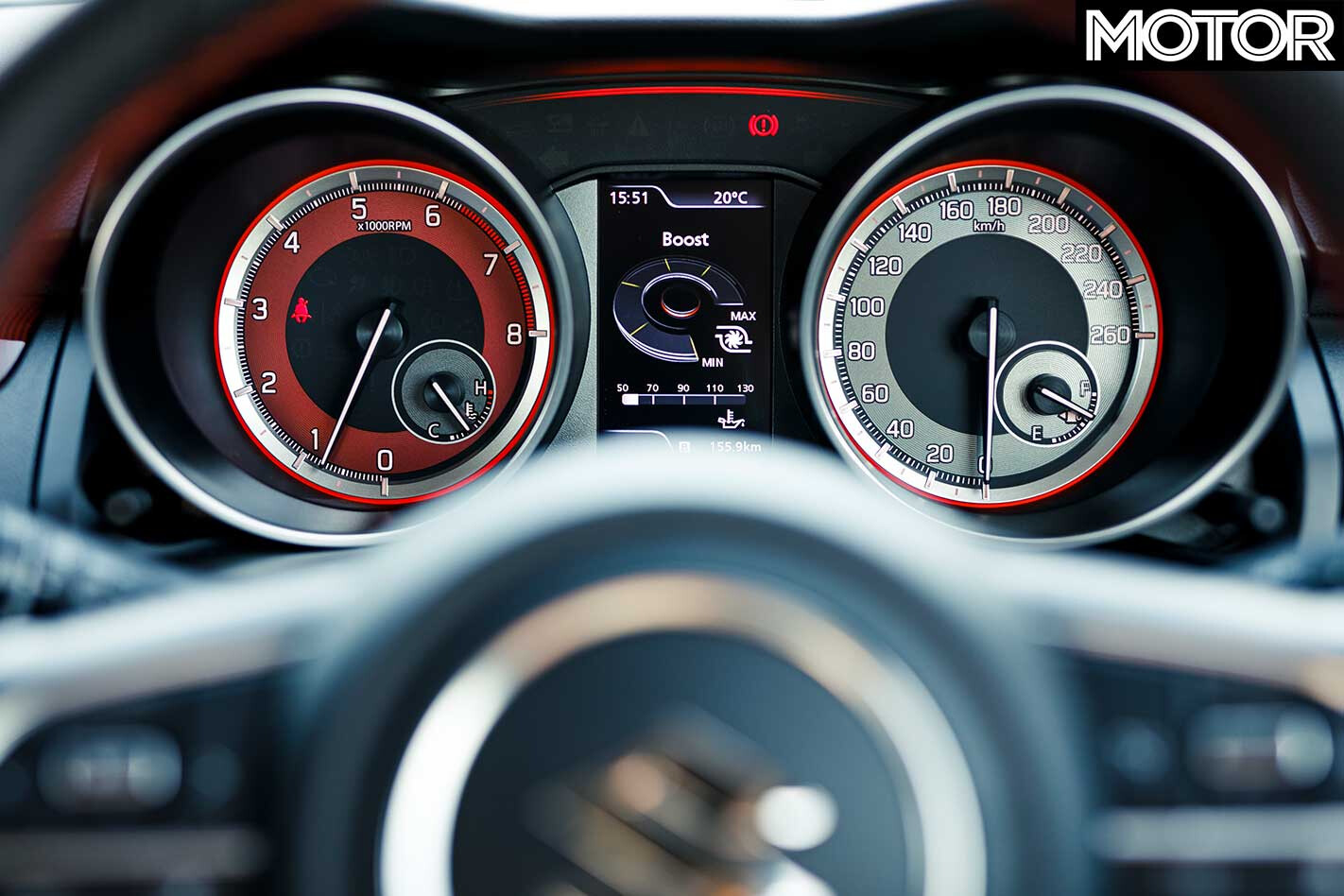 The little engine is a beauty, although that’s dependent on you having the smarts to feed it another gear by the time the tacho has reached 5900rpm. Because after that point, the fun – and boost – is all done.

Around the Winton layout, that equated to the thing needing an extra 500rpm (or even a few more) just to keep it flowing on the gearing it’s blessed with. The overall short gearing is appreciated, but like many cars before the Suzuki, the tricky Winton footprint showed up that inability to hold a shorter gear for a tiny bit longer to get you to the next braking marker.

That slight shortness of breath is amply demonstrated by pretty much all the acceleration and lap-time numbers where the Suzuki finished motherless last, but when you look at the average speeds through the various apexes, that changes and the little Zook starts to come back into it. And for all the relative lack of go, there’s no such shortfall when it comes to whoa and the Swift pulled up very darn smartly.

Pretty much all the judges agreed that there are a couple of things Suzuki could do to make big strides in a competition such as this. The first would – obviously – be to stuff some more power and torque into the thing. No brainer.

But the second, slightly more debatable statement was that the little bugger could use a front diff. Jumping straight from the driver’s chair after a few laps, that much appears obvious, but then, when you hold the Swift’s strong points up to the light, it isn’t corner speed that lets it down. So who knows; maybe a diff wouldn’t make too much difference until you sort out the rest of the performance deal.

As it is, though, there’s plenty of body-roll and slides for the taking which seems like fun for a while until you try to stay with one of the big kids in the grown-up cars. At which point the Suzuki reveals that even though it’s a fun road car, as a track-day wannabe it’s got some work to do.

Warren Luff - 13th
“So many hot hatches over the years have grown up and got bigger, heavier and loaded with electronics. But the Swift is still that fun little thing you want to throw around. Its mid-corner speed is really good, but obviously it’s going to lose out on the straights. Still, through all the twisty stuff at Winton it’s a match for any car here. You can feel it wheel hike and do all the things you’d expect a small hot hatch to do. Straights are its greatest enemy.”

David Morley - 12th
“Is there anything more fun at this price?

Dylan Campbell - 9th
“What a great little car. A body-rolling bundle of fun”

Louis Cordony - 7th
“It is as tiny and chuckable as a terrier. Good thing”