Straight-six versus V8 was once the most common battle at Mt Panorama: XU1s, Charges, BMWs and even Nissans have pushed forward many challengers, but it’s been the V8s in Monaros, Commodores, and Falcons that have set the pace.

And it’s a battle not limited to Bathurst, as the Europeans have their own speed demons – like a last hurrah for the current M3 engine, one of the finest six-cylinders in existence and one of few to surpass the 74kW (or 100hp) per litre barrier. 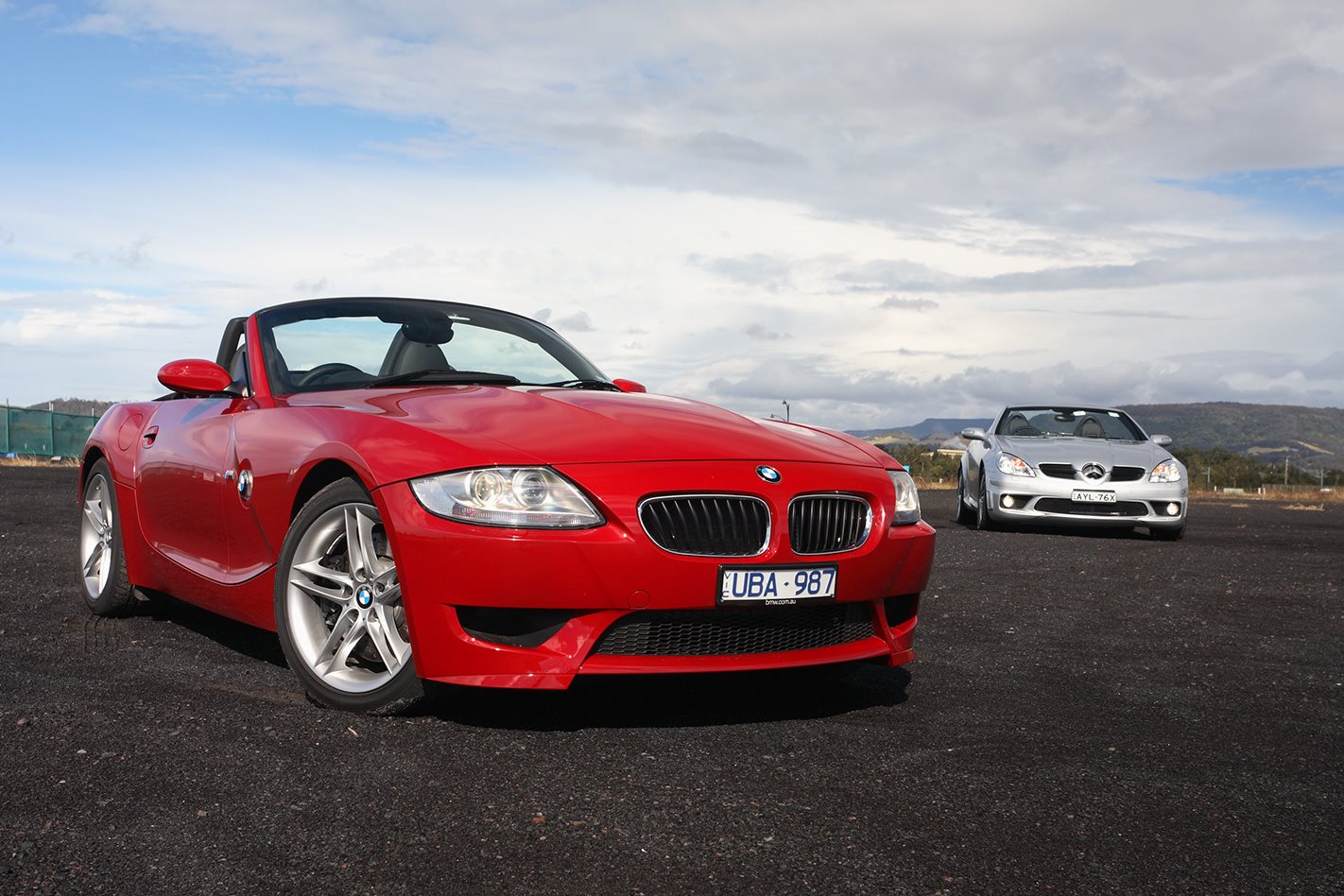 What Mercedes’s 5.4-litre V8 lacks in outright technology (with single-overhead cams and three-valves per pot) it makes up for in raw muscle, ensuring every last one of its 265kW is present.

It was quite the natural act of a few months back, when BMW dropped its glorious M3 engine into the bay of the Z4 Roadster. The 3.2-litre straight-six worth 252kW is well proven, well hard and well worth the relatively simple effort of displacing the 190kW 3.0-litre straight-six. More engine plus more power equals faster car. Slap on some M badges and upgrade the running gear. Easy.

It all sounds vaguely familiar to the theory behind the SLK55: AMG’s grunty coupe/convertible lost its 3.5-litre V6 in favour of a big 5.4-litre V8, and gained 30 percent more power. Big engine, small car, works every time.

Back in March, Merc’s 55 beat up Porsche's Boxster S Tiptronic and Audi's S4 Cabriolet to claim the $150k drop-top bragging rights, but we suspected with a self-shifter, the Boxster would have been the one taking the win and counting its $20k savings. A rematch was in order. 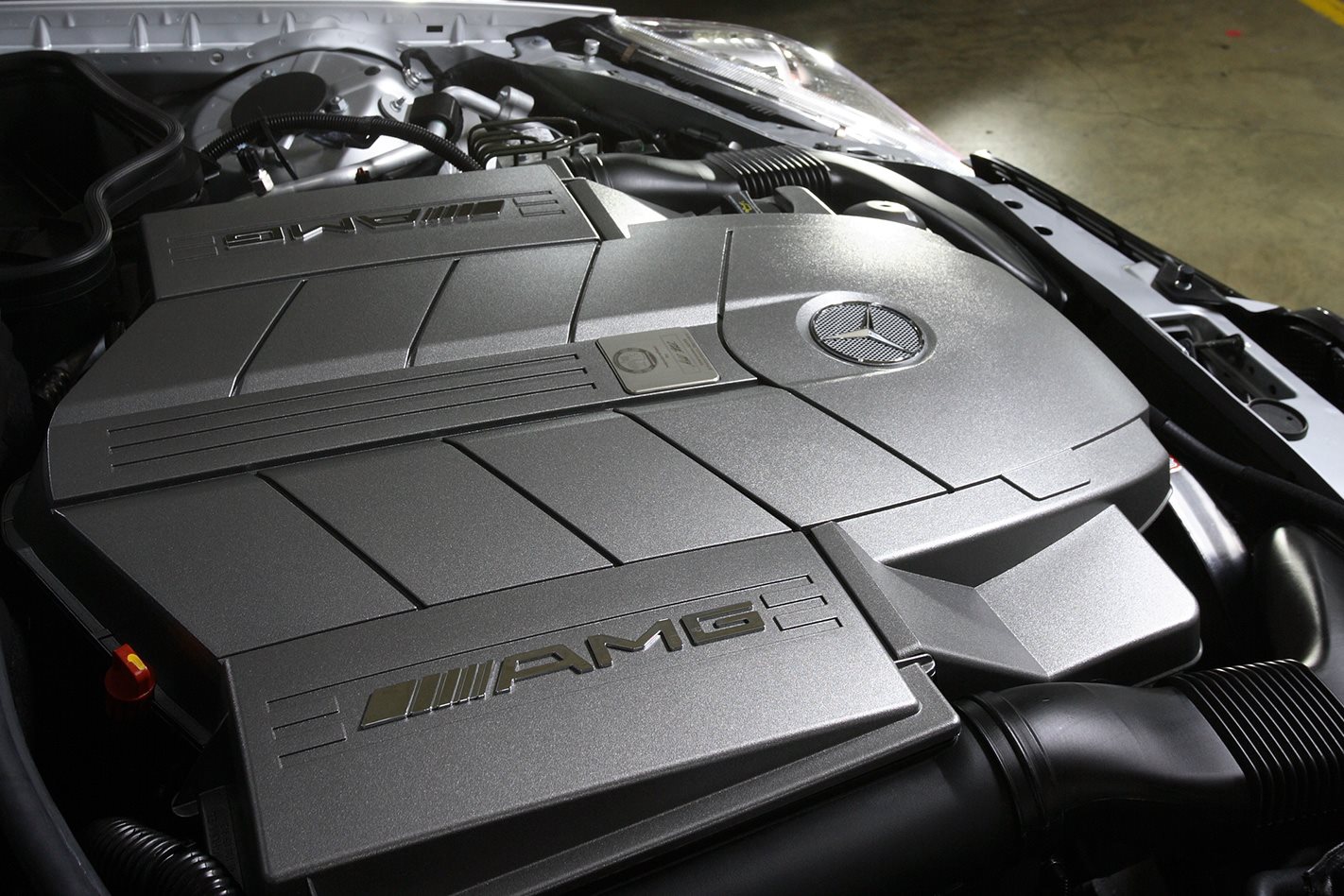 So while AMG plucked a new SLK55 from its showrooms, Porsche, in the midst of its 987 Boxster model cycle, sadly couldn't find us one in time. Never mind.

Both are two-seat sports convertibles at the top of their trees, the soft-top BMW-uses a delicious six-cylinder and only a six-speed manual. The folding hardtop Merc may have only an auto backing its V8, but it’s a seven-speed.

Both run similar hardware when it comes to wheels, tyres, brakes and suspension but the BM is marginally longer and larger, the Merc a bit wider. Even the power to-weight ratios are virtually identical. 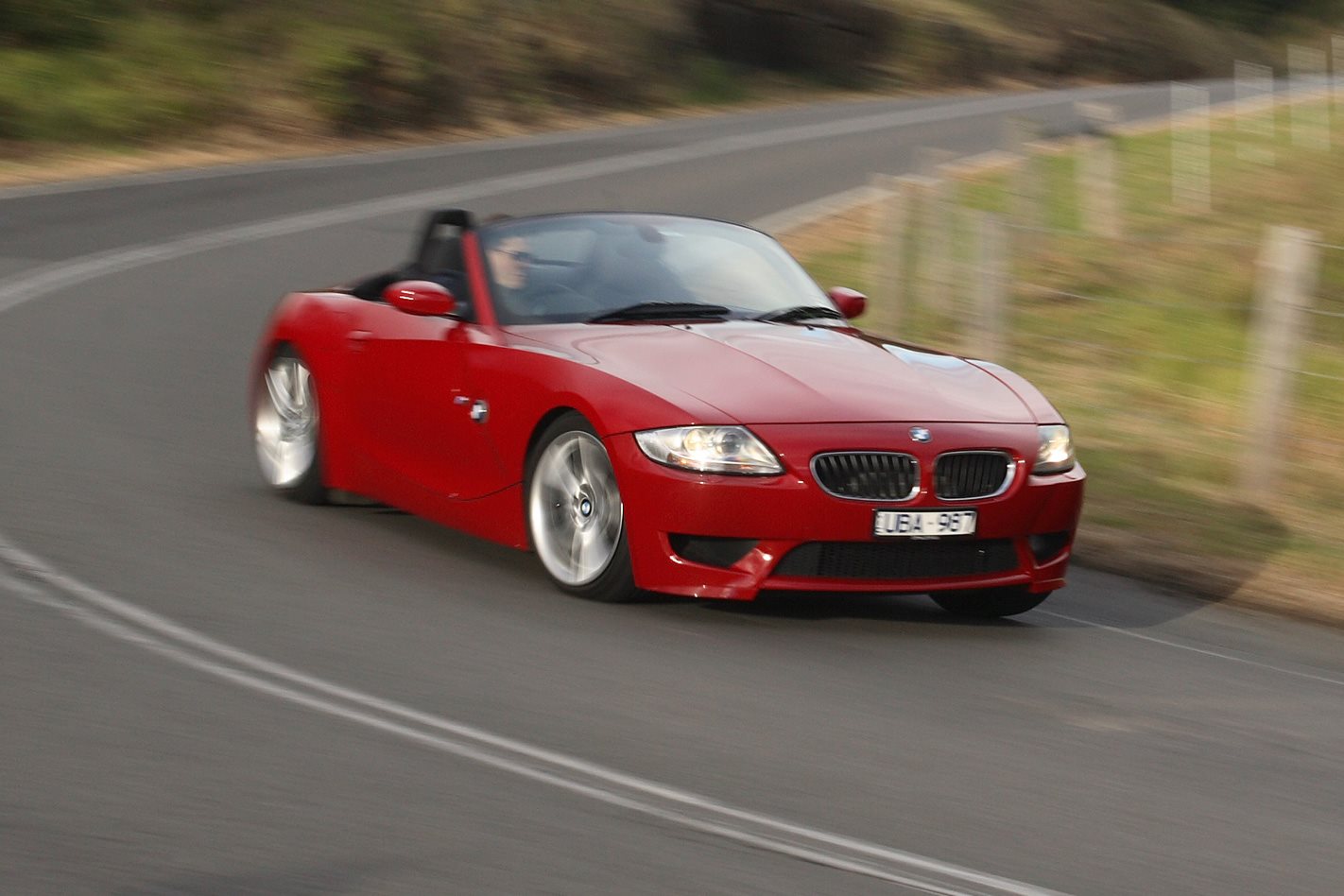 The biggest difference is the price, with AMG's hike a considerable $30k more than the Z4 M. BMW typically shoots itself in the foot with a long list of options, but with leather, heated electric memory seats, sat-nav, 10-speaker stereo, tyre-pressure monitor and steering wheel controls all standard on the Z4 M, this time it's different.

In fact the only cost option on this lmola Red car is $450 electric folding mirrors. Too bad it’s not possible to option practical interior space for a phone and wallet.

The no-cost ‘unlaquered' carbon fibre dash option is initially odd, but is more tactile and different enough to be a high point, otherwise the cabin is clean and logical.

The AMG is wider outside and in. There isn’t the super-low sporting seating position of the Z4 but there is more elbow room and an uncramped feel with all the controls neatly laid out and useable storage space. But enough already, it’s time to hit the flowing, scenic roads around Sydney's Southern Highlands. From Sydney's CBD. 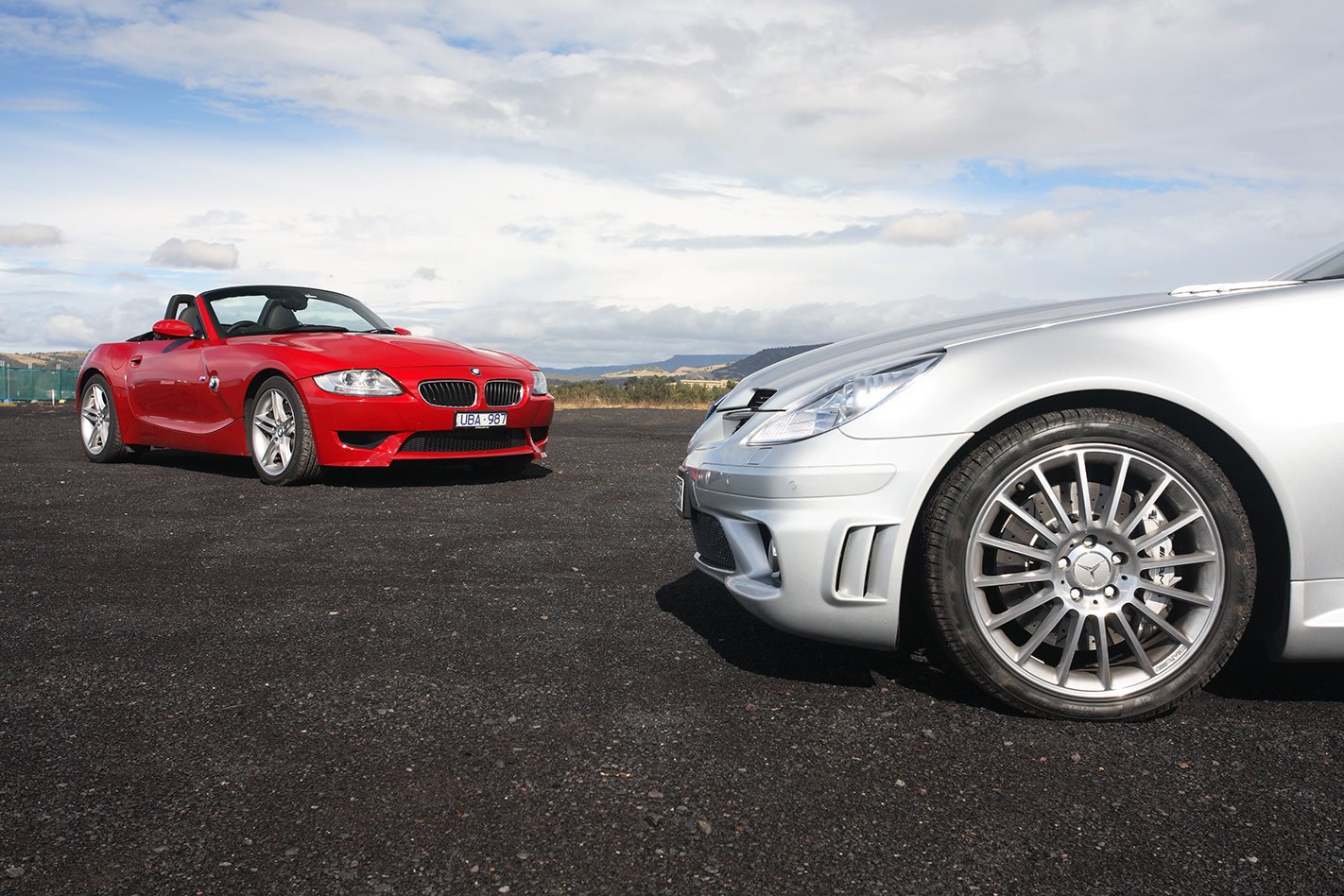 The city grind is better suited to the AMG, its hand built V8 as responsive as the BMW’s six, but with a little more urge everywhere. It’s not as massive a difference as the torque figures suggest (365Nm v 510Nm), but it’s as noticeable as the different engine notes.

No one has ever said the M3 engine is short on response, but combined with a firm clutch pedal and clicky shifter, it's sometimes bunny-hopping down the road, your right foot lifting in an unfortunate unison with the sharp power surge.

Learn to lean on the trick hill-hold function and it moves away much smoother. There is the Sport button that heightens throttle response and steering, but personally speaking, it’s sharp enough as it is.

The BMW also gets hydraulic steering, a first for Z4, and while it’s heavier than the remote Merc's, it doesn’t translate to more feel. The Z4's steering is accurate, but it's far from Boxster brilliant. The brakes too feel good around town, the single-piston front calipers nice and responsive when the going gets café latte. 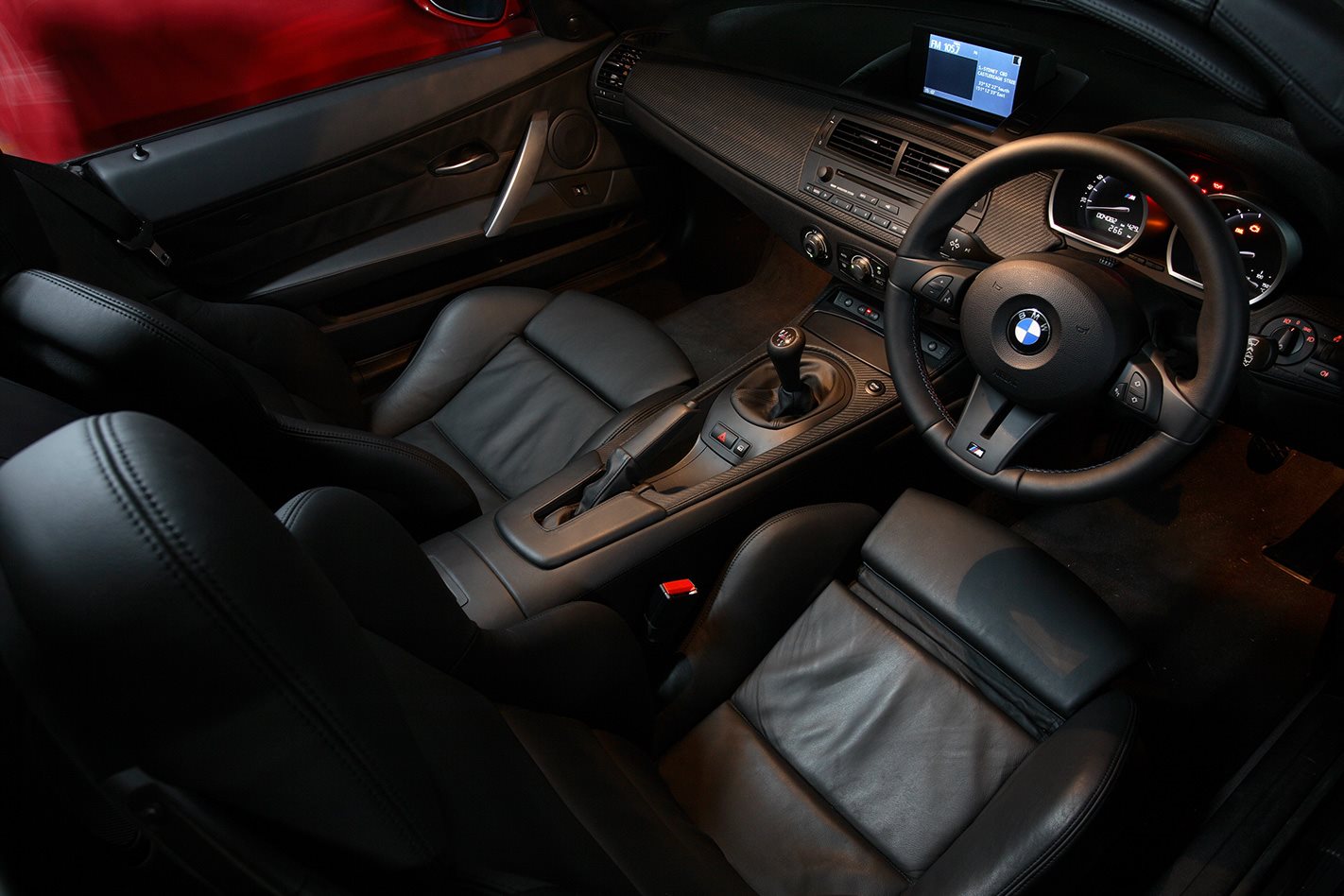 But in another Z4 first, the ride quality is, finally, to the point of acceptable thanks to the loss of run-flat tyres. The rearward cabin tended to pogo-bounce the occupants, but the run-flats' loss is the Z4 M’s gain: it’s still firm, but firm like a sports car should be, not firm like a jackhammer.

The AMG is very much the boulevard cruiser in comparison ignoring a lot of the minor road bumps the BMW highlights. Responsive brakes, light steering, plenty of grunt, the AMG loves the lazy light-throttle.

But we love a heavy one and as the throttle cracks open with an eight-track of dulcet tones of a hollow V8 bellowing out theatrics that induce surprised looks of ‘was that a V8? from passing pedestrians. AMG’s V8 is brutal, powerful and totally addictive but far from refined; like an iron fist in an iron glove.

Despite feeling floatier, the SLK55 feels better stuck down than the BM. Tip it in and the front end bites, the shorter wheelbase feels a fraction more twitchy, but it’s as neutral as twins on a see-saw. Boot it on exit and the rear end will give a predictable little wag as both tyres find their grip limits, but it’s as easy as it is fun. 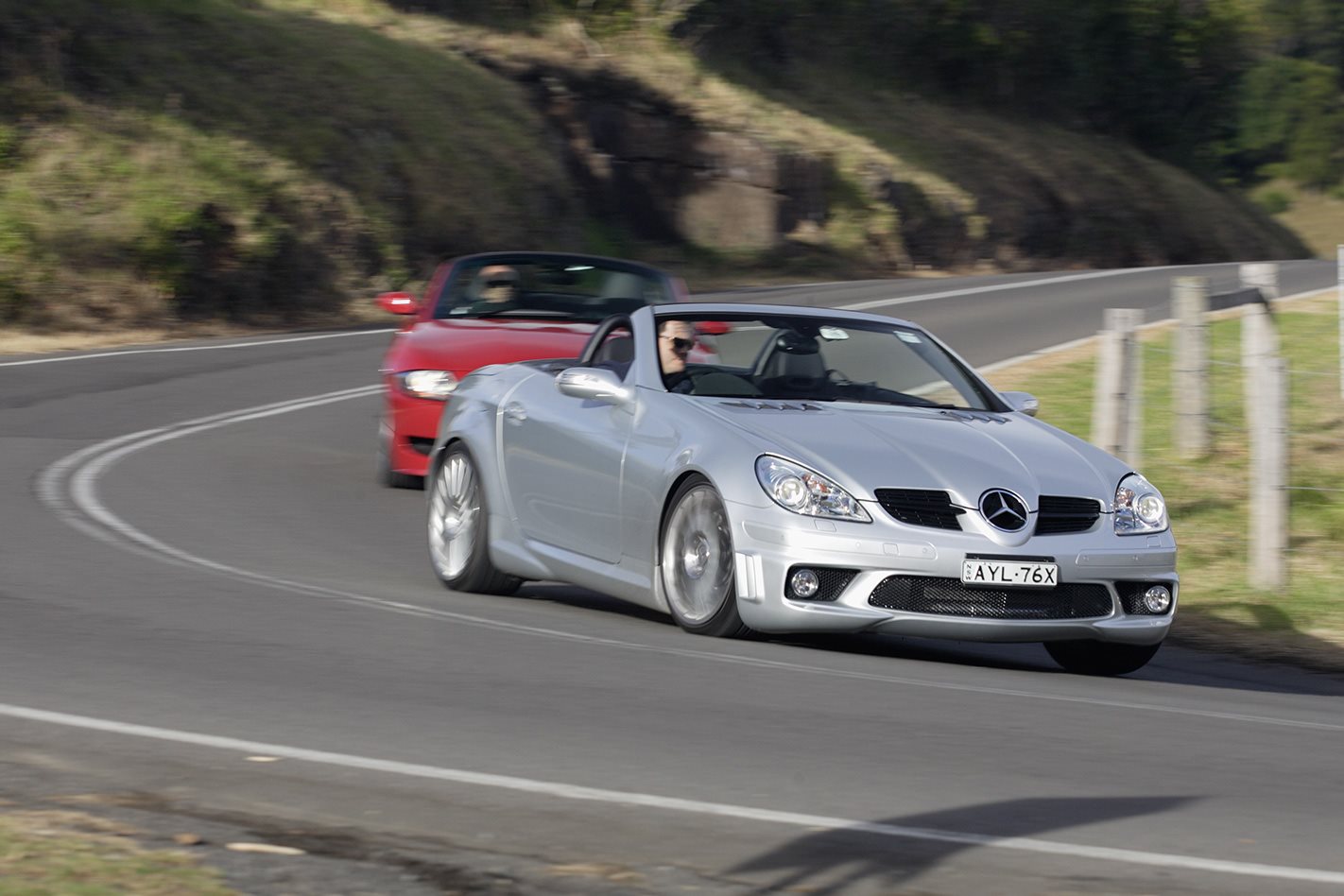 The BMW tested on another day did do faster times with a 5.2 to the 100, but it was less consistent, and tested at Oran Park with a downhill finish that helps time and speed past half-track.

Use the figures only as a guide because from 20km/h we lined up both cars and the BMW proved its worth by matching the Merc in rolling starts from 20, 40 and 60km/h, but never beating it. The BMW jumps ahead half a car while the Mercs auto kicks down a gear, but it hammers out just enough speed to get ahead. It’s teasing the BM, which is left to think so close yet so far.

In our entire test, the BMW never beat the AMG, but it was never more than a car-length behind either. And for a six, that’s the Z4 M’s most impressive medal. 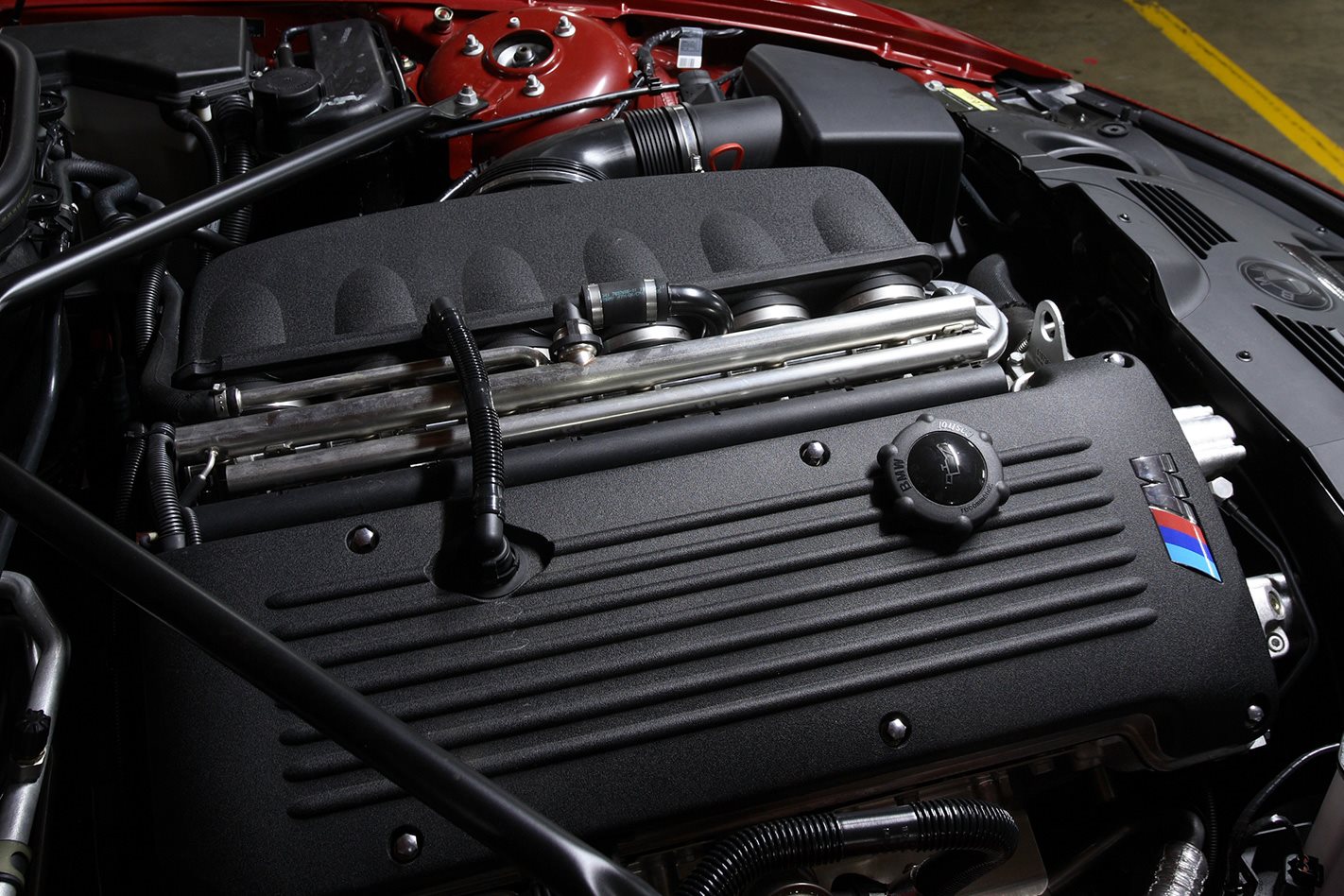 You’d think with the lighter chassis, lighter engine and the BMW reputation for handling, that the Z4 M would eat the Merc in the corners. But you’d be wrong.

Through the same set of comers that the Merc shone, the BMW suffered from mild understeer and a twitchy chassis that rolls, yaws, and is just plain unnerving. Little wonder a few were stuck into the wall on the launch.

Thanks to the masses of rear-end grip, it's never in danger of spinning off, but not is it fun waiting for the nose to grip. Even stamping the throttle to provoke a slide proves futile.

Having said all that, the BMW was the complete opposite on the track, where a heavy boot induces the most wonderful powerslides the M3 was famous for. 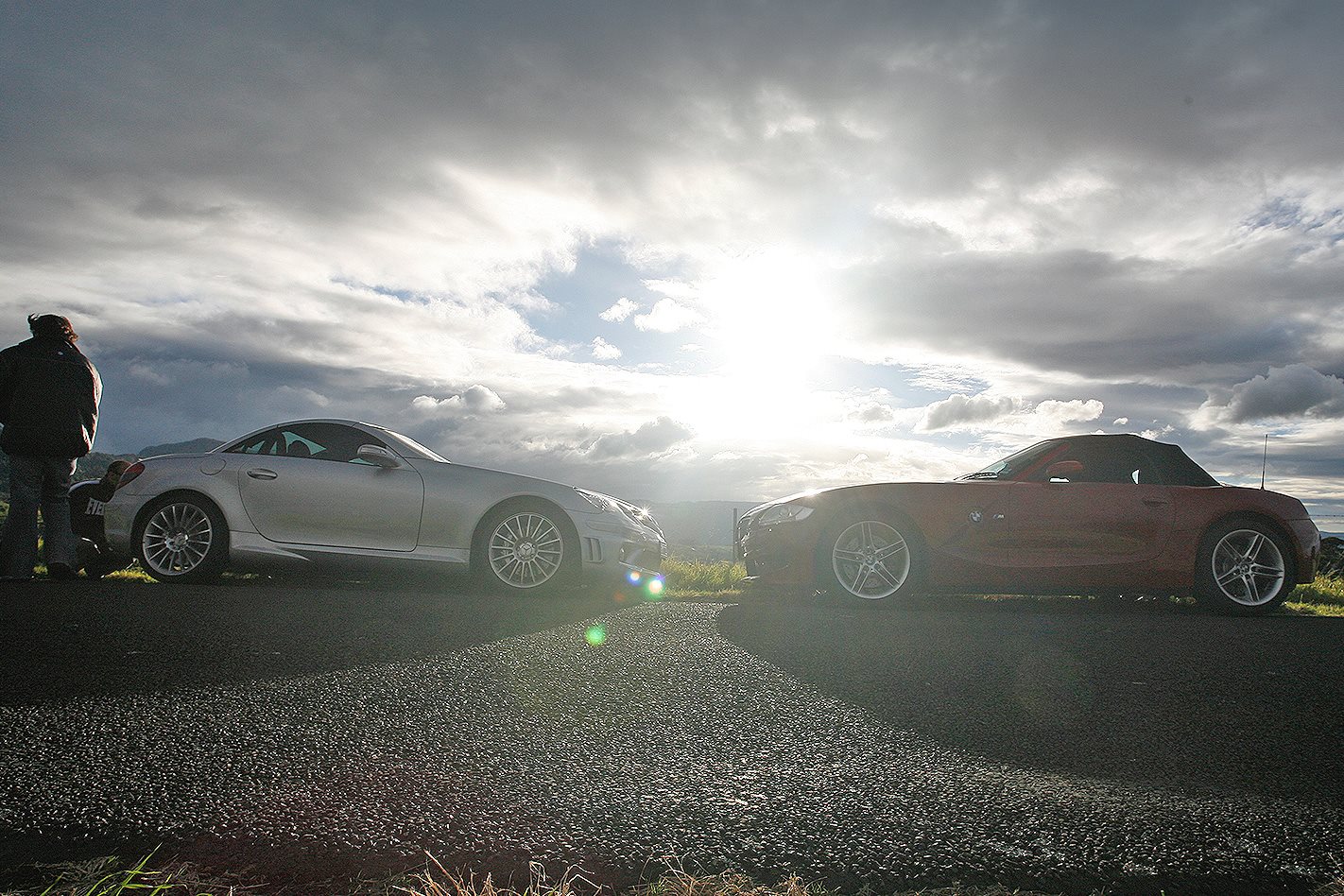 Paradoxically, keeping it straight is hard work, the chassis constantly pitching and rolling with a constant unnerving feeling that it’s about to spit you off the track for being a fool. It’s very quick, no question, but it isn’t easy to extract every last drop as with the AMG.

And those BMW brakes, so impressive around town, turn to mush with a long pedal and reduced stopping power. Sure, BMW may not want the visual sex of a multi-piston caliper, but the performance of a single-piston sliding front brake system is not befitting the rest of the Z4 M.

The AMG’s brakes are in another class, and stop the 55 in another suburb. Look at the specs; all we need to tell you is that they score A-plus.

To be fair, the Z4’s engine scores the same: revvy, soulful and sporting a power curve as linear as a leaning ladder; sure, its metallic rasp can sound like washers in a paint shaker, but its induction roar from the cabin is electric as it winds out to 8000rpm. 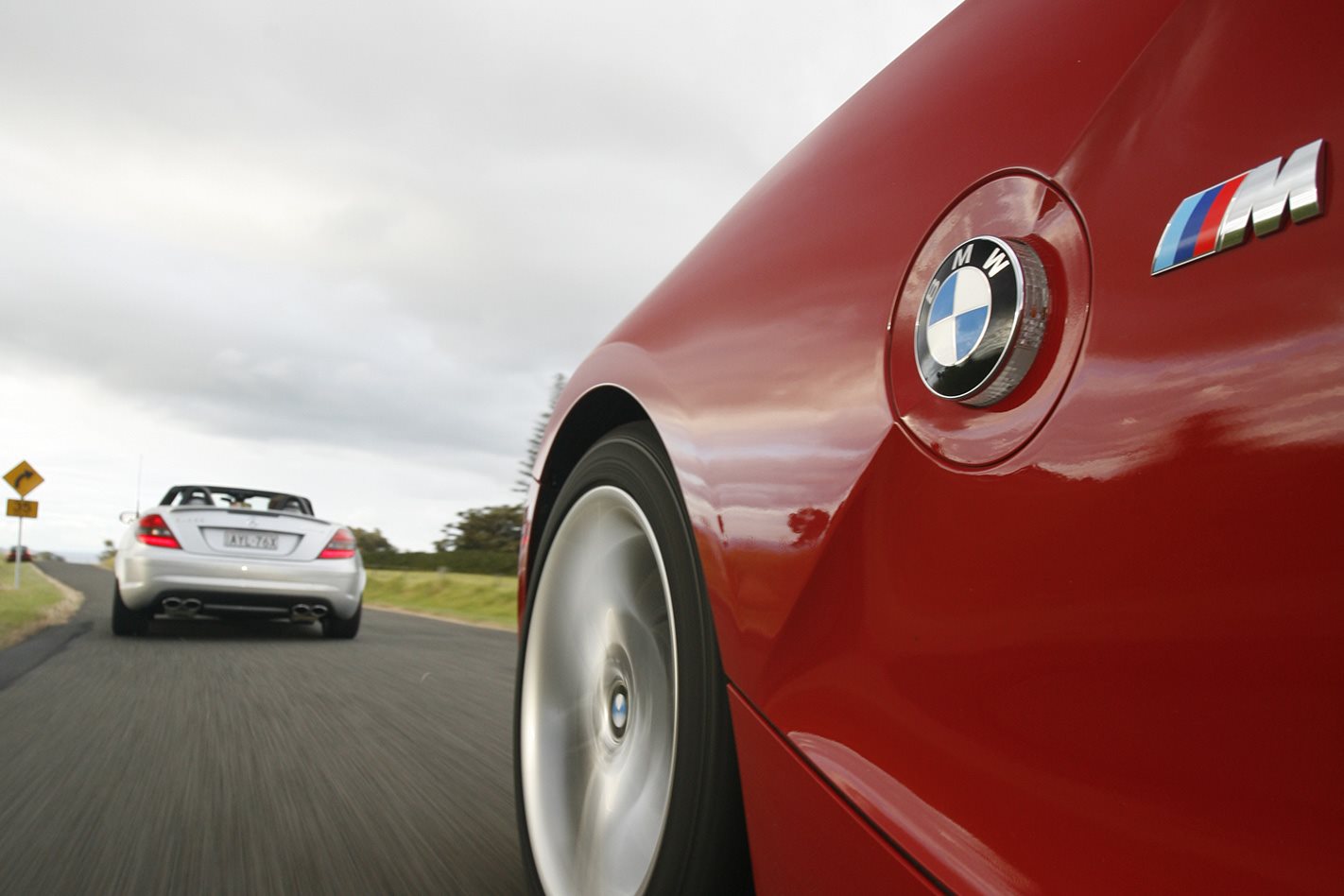 Revs equals power but it also means fuel, so the fuel figures on test were as expected, the BMW using 13.5 litres/100km against the Merc’s 16.0 litres/100km.

So which wins? A hard one to pick: the BMW Z4 offers 90 percent of the thrills of the AMG at 80 percent of the price. On maths alone that’s a solid win. But like lap times, it's that last 10 percent that separates the very good from the great.

The noise, the ride, the interior, the hard roof, and the gilled and fattened stance that form a front-three-quarter angle, pushed over its sweet 18-inch multi-spoke alloys, is tougher than a life-sentenced inmate.

So we'd be better to define each buyer: the BMW Z4 M Roadster will be snapped up by the advertising exec who stays up every second Sunday in his BMW F1 team shirt, eager to see his driving heroes. 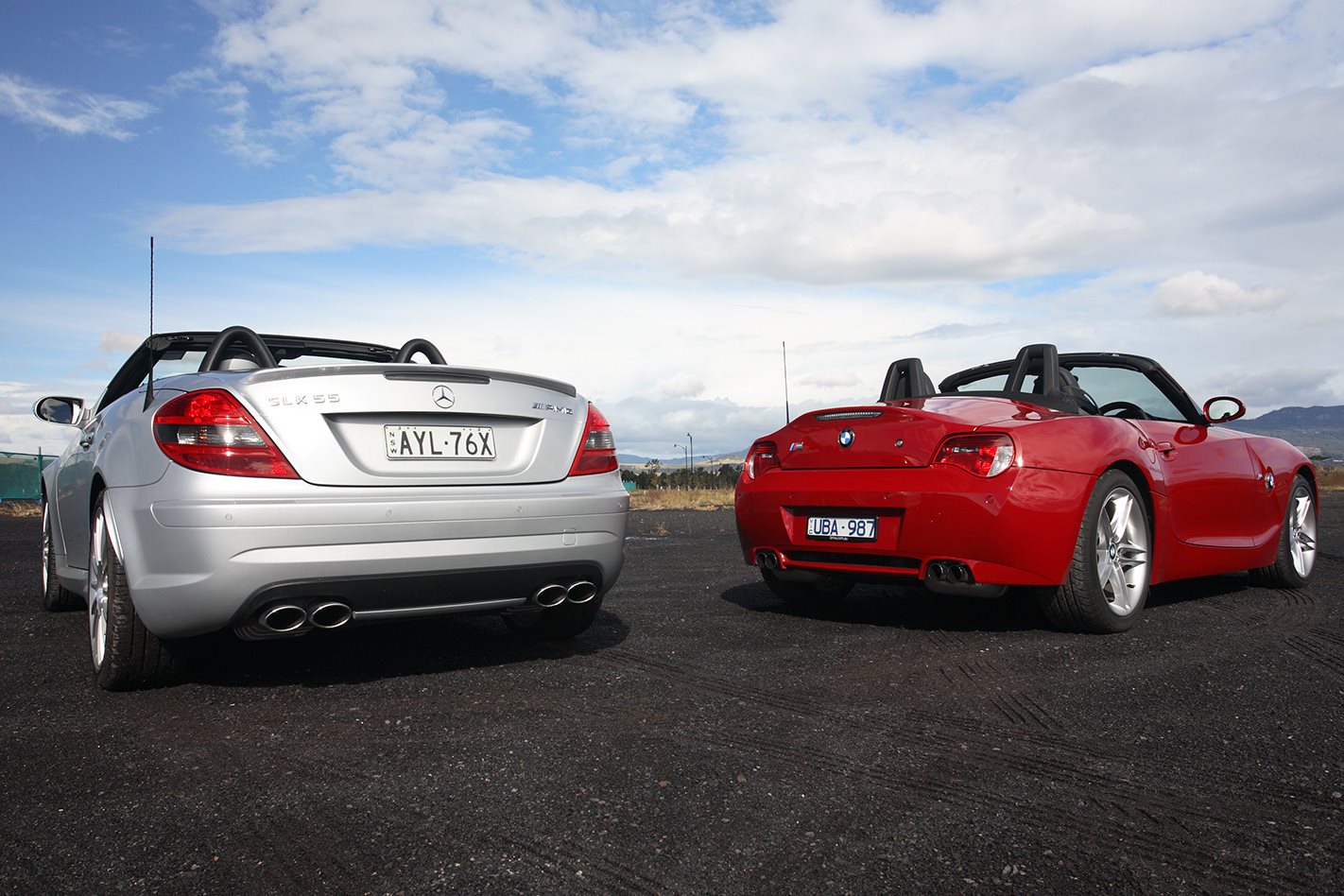 He has the M key ring and goIf balls and the 1/24th scale M model at work. He buys a BMW because he is an individual - just like the thousands of other BMW M owners.

The SLK55 AMG buyer watches F1, but from his digital hard drive recorder on Monday night.

He bought the AMG not for the badge, but for the brutality of knowing that in a straight line, through the corners, under brakes, when there's cold, comfort or convenience in the equation, the price becomes irrelevant knowing that compared to an M Roadster, despite the price, the SLK55 is just that little better. It is a V8, after all. 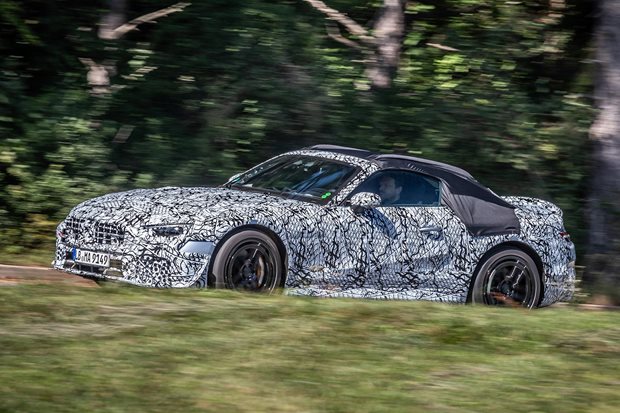 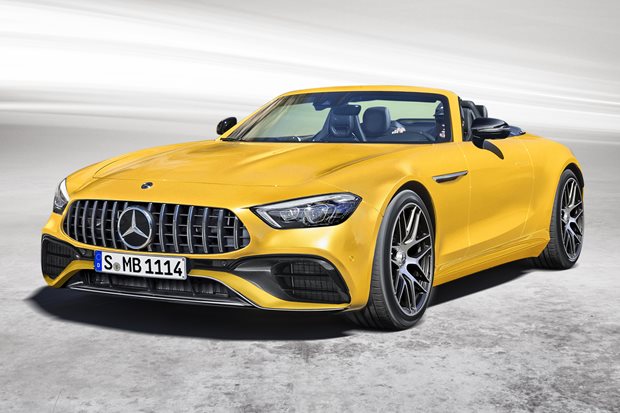