Sometimes your fantasy machine is right around the corner

THERE ARE two kinds of people in the world. Those who take life as it comes and those who make things happen. Wojtek (pron. Voi-Check) Stainwald definitely falls into the latter category.

Wojtek always wanted a ’67 GTO. As it happens he was in the process of bringing a GTO over from the States when one popped up in the local paper. Having your dream machine appearing so close — it must be fate! 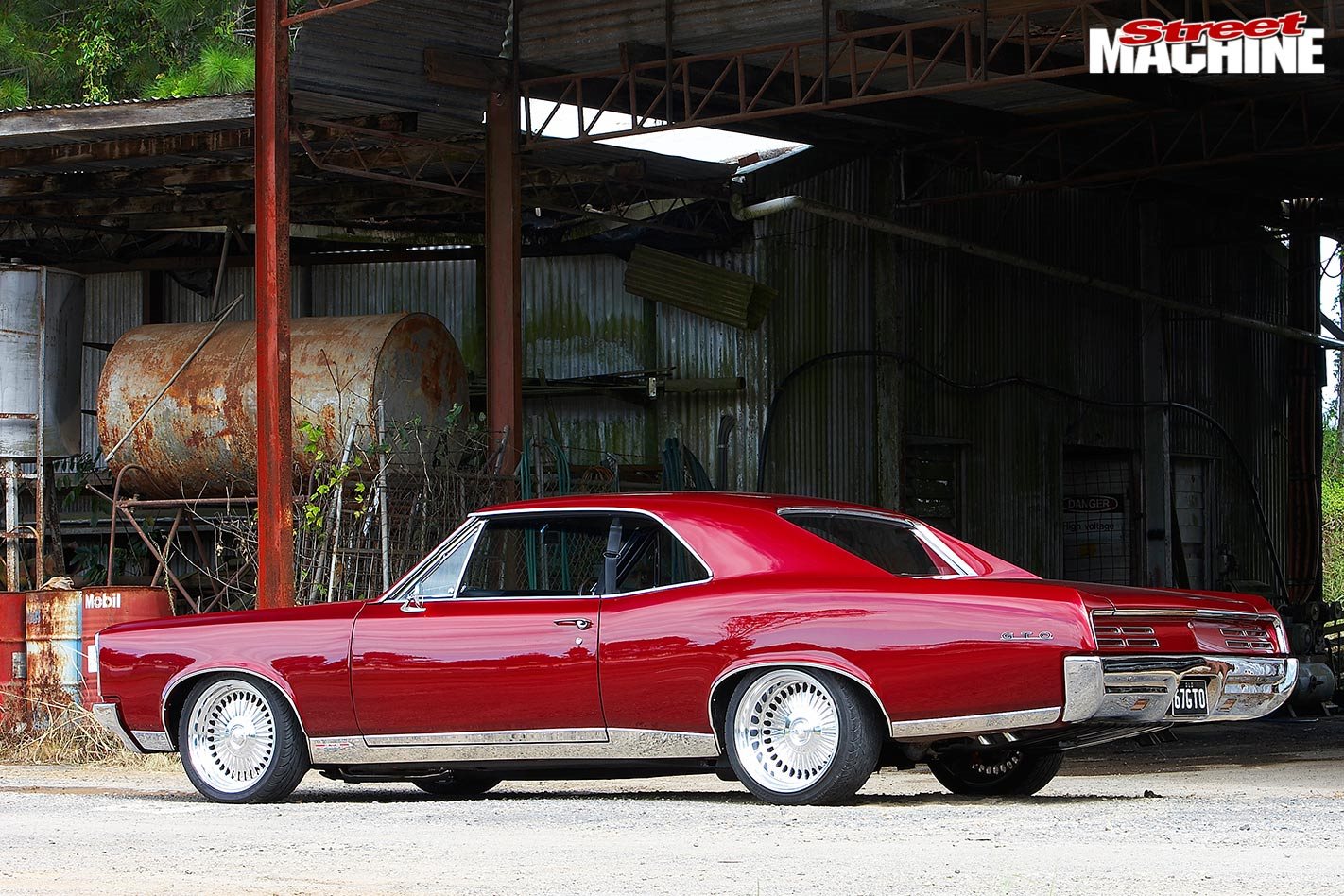 But fate was playing a cruel trick it seems; Wojtek phoned the old bloke who was selling the GTO only to find that the seller just couldn’t bring himself to part with the old girl, and he’d withdrawn it from sale. Wojtek wasn’t ready to take no for an answer. He asked the old guy if he could come around and have a look at the car anyway and he said: “Yeah, okay, why not.”

“I spent the whole day working on this guy and telling him what he wanted to hear,” Wojtek says. “I eventually managed to convince him that I would take good care of his baby and in the end he caved in and said: ‘Yeah, okay, it’s yours, take it.’ I didn’t want to risk him changing his mind so I whipped out my chequebook without haggling the price. I’d bought the car and that’s all that mattered. If the cunning old codger was playing me just to get maximum dollar, I really didn’t care. The car was mine.” 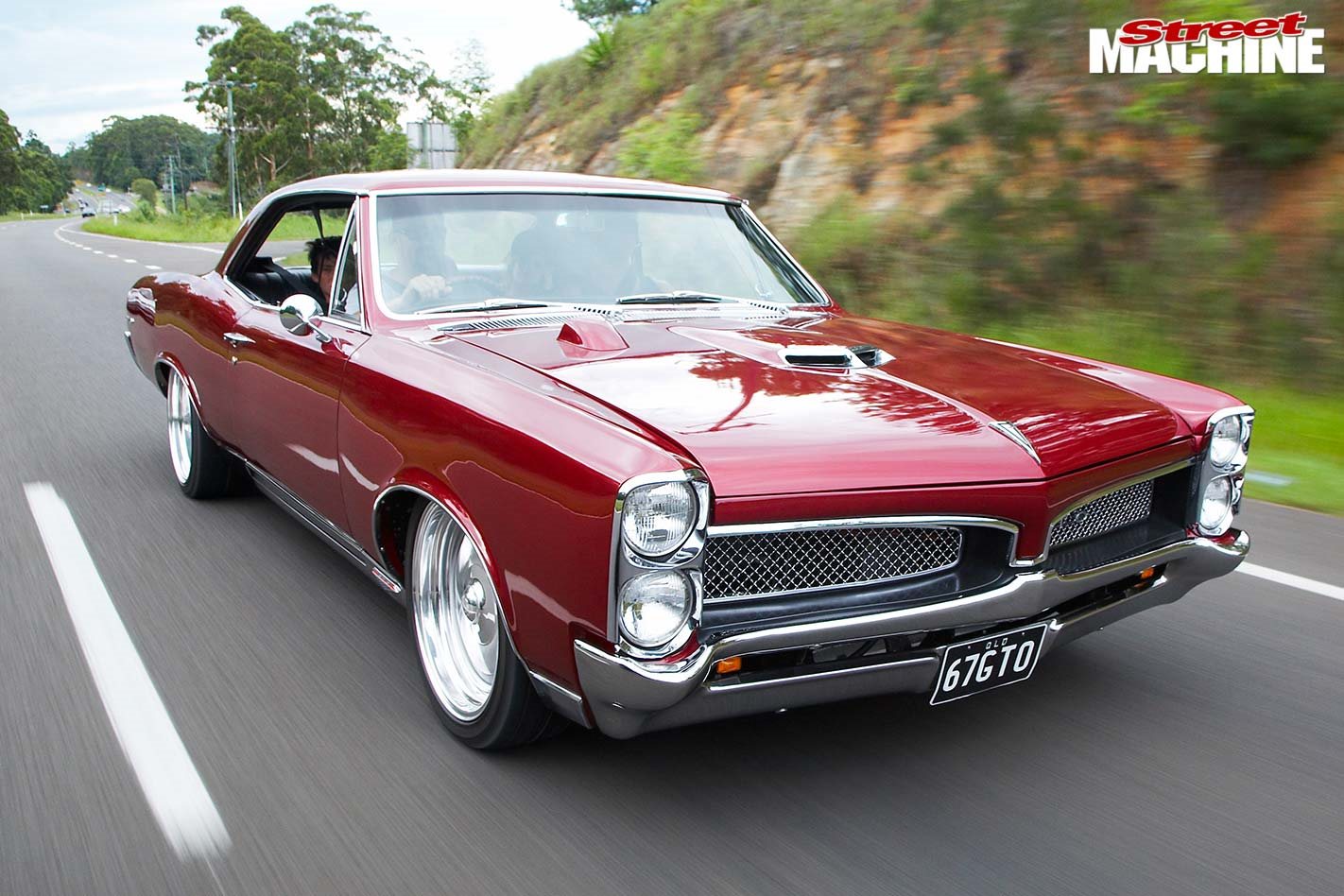 For the next two weeks Wojtek spent many sleepless nights worrying about what lay beneath the existing paint, and whether the work had been done properly. Eventually he took the car to the shop and stripped it down.

“When I arrived home with the back of my Chevy Silverado filled with GTO parts, my wife was not happy,” he admits. “In fact if my memory serves me correctly I think she cried for about a week. Two weeks earlier I had spent $36,000 buying this car and now in her eyes it was nothing more than a pile of junk. I said to her: ‘You’re just going to have to trust me on this one.’” Wojtek tried to reassure her it was for the better but she took some convincing.

The panel work and new paint job was entrusted to Marks Customising and was finished in a modified version of Saab Dark Red. But apparently getting the exterior sorted was the easy part; getting the engine rebuilt was a whole different kettle of fish. 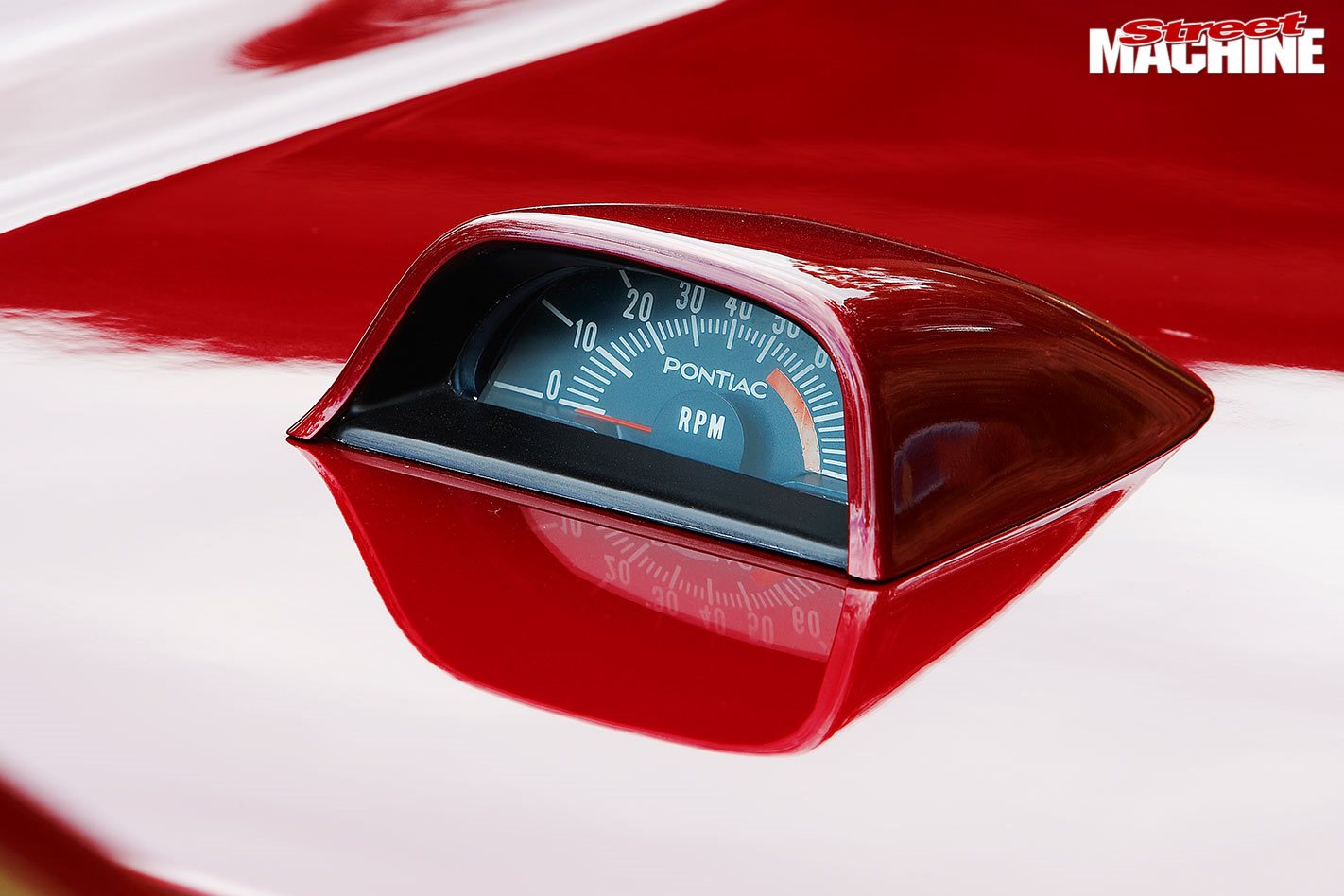 According to Wojtek, building a Pontiac in Australia is a real challenge because not a lot of people know much about them.

“I got a lot of pressure from mates and others to rip out the Pontiac motor and drop a Chevy into it, but I said: “No way — the Pontiac stays. They’re good strong motors.”

Wojtek originally entrusted a well-known performance shop to do the engine work. “They had a go at it twice but without much luck. The motor lasted about two months so I left it sitting in the shed for the next couple of years.”

Eventually he hooked up with KV’s Race Fabrications and can’t speak highly enough of the team there. “Those guys are true professionals. They’re the real deal,” he reckons. 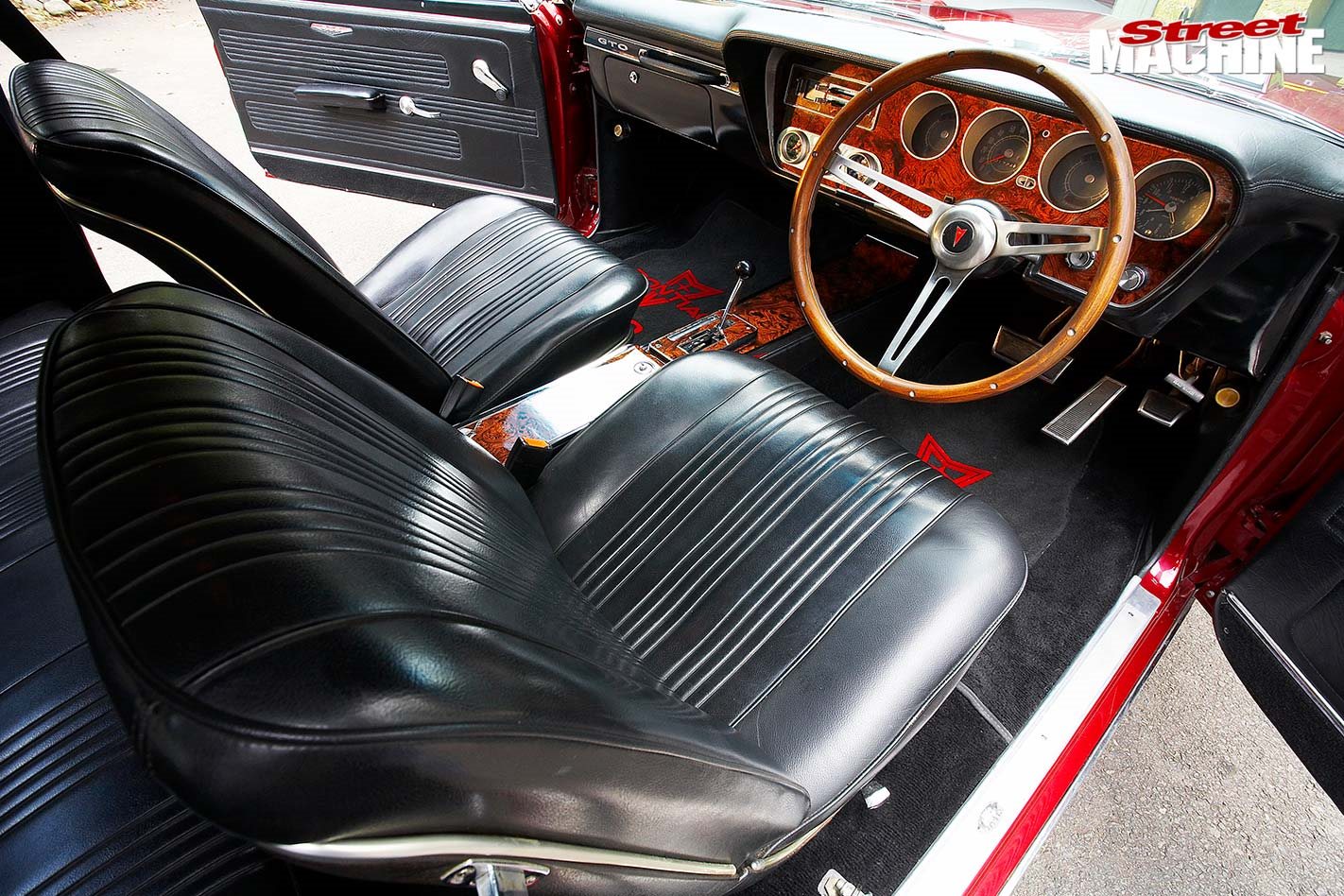 Wojtek wanted a pump-fuel streeter that he could drive every day if he wanted to, and occasionally run at the Nostalgia Drags.

“After KV finished the motor, I ended up with 11.7:1 compression which is perfect for the street,” he says. It obviously makes the power too — at its first nostalgia race meet with the new motor, the car earned an 11.85sec timecard, and it’s not exactly light.

“I’m sure KV hates this motor but he gained so much more experience through it,” Wojtek says.

During the build, the 400ci Pontiac motor was adorned with all the usual performance goodies like a Comp cam, solid lifters, forged pistons, and an Eagle crank to stretch it out to 486ci. 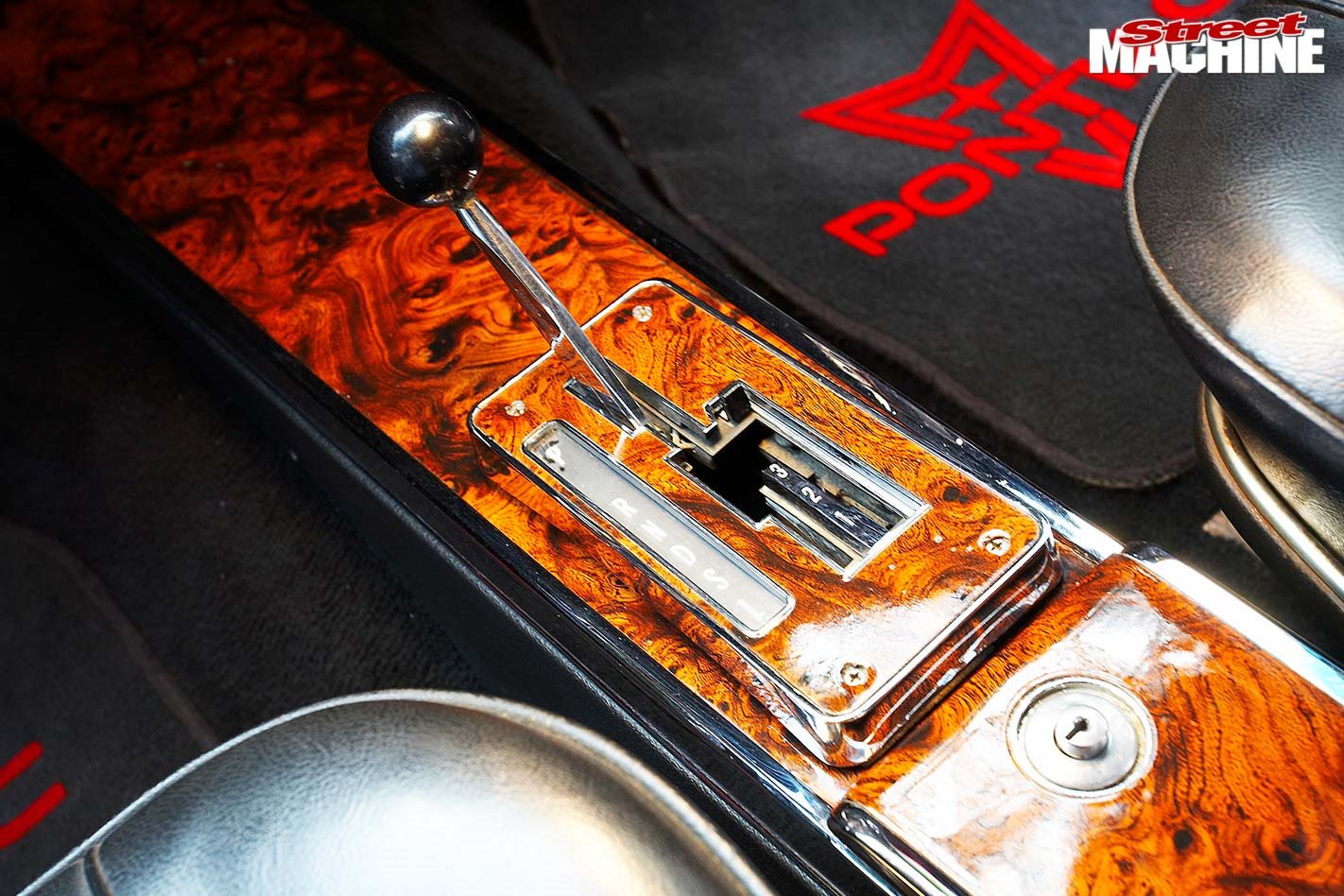 Factory ‘his & hers’ Hurst shifter. The gate can be closed for trips to the shops or opened for performance driving

Up top an Edelbrock Performer RPM inlet manifold, BG Demon 830cfm carb and a pair of Edelbrock Performer alloy heads fitted with Milodon valve springs and roller rockers complete the package. While Wojtek is cruising the Sunshine Coast, the engine temperature is kept at bay thanks to the custom KV triple-bypass radiator and twin thermo-fans.

Being a big bus with a whole mountain of cubes, the Pontiac needed a tough Turbo 400 trans, which was built by Paul from PST Dyno & Performance. The 3500rpm stall and 3.9-geared Ford nine-inch help to deliver 438 dyno-proven rear-wheel horses to the road.

Billet Specialties GS47 18in rollers deliver the flash outside but the suspension is handled by King springs and Pedders shocks. Stopping power has been improved with HQ Holden front discs and calipers, while EB Falcon gear helps out on the rear. 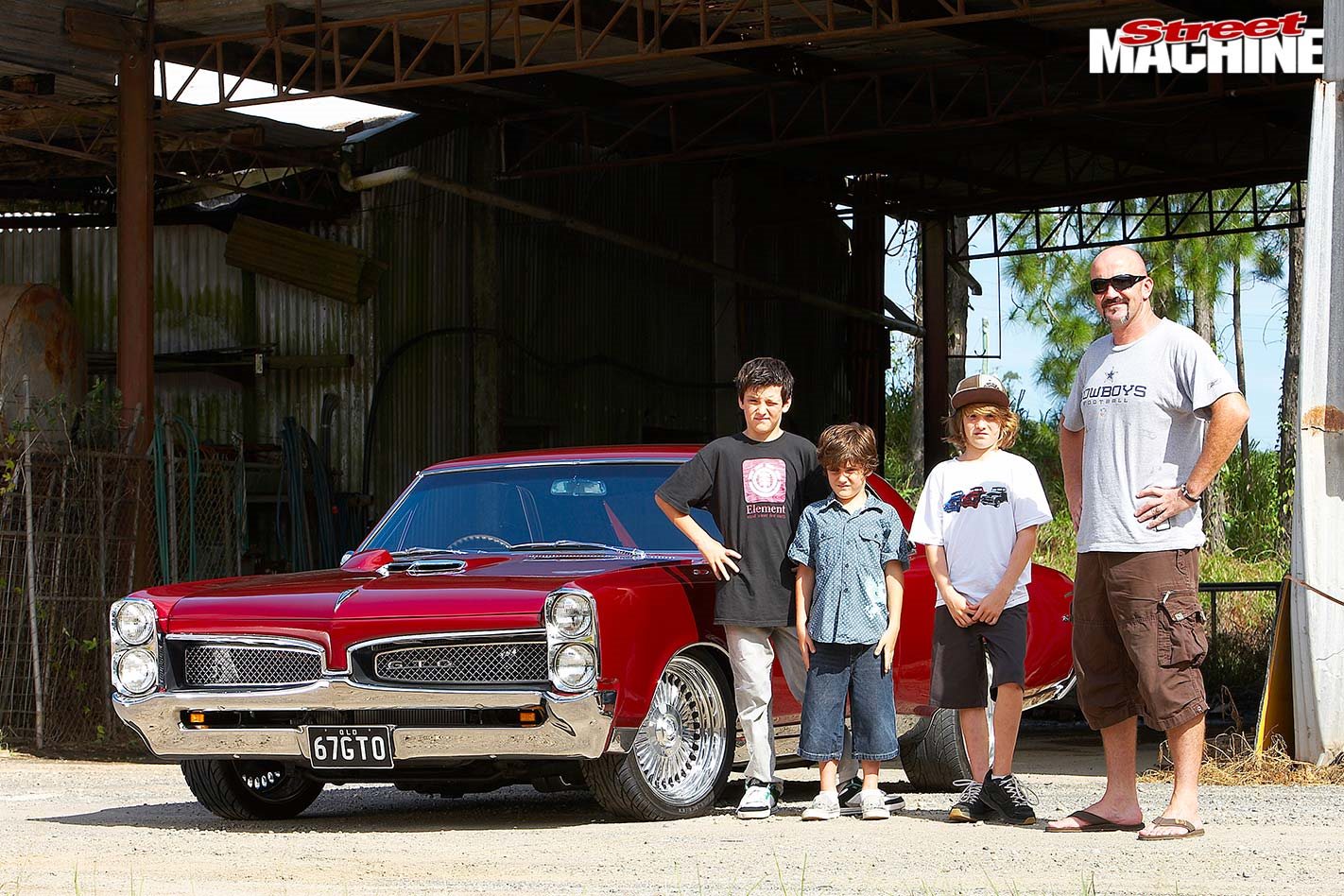 According to Wojtek this won’t be the last project to roll out of the Stainwald’s garage. Far from it because both of his boys are car-mad and have their own projects planned for when they’re old enough to wield the spanners.

But Wojtek has plans of his own in the form of a 1970 Firebird Formula race car.

“I want to run another balanced and blueprinted Pontiac motor, but I’m having a hard time convincing KV to build it!”

ONE BLOCK FITS ALL

PONTIAC had some pretty cluey engineers, it seems. Rather than make different blocks for various applications, they made one block that could be used for just about anything. The overall dimensions of the Pontiac V8 are similar to the big-block Chev, though it is shorter in length, and can be identified by the extended exhaust ports protruding from the heads. 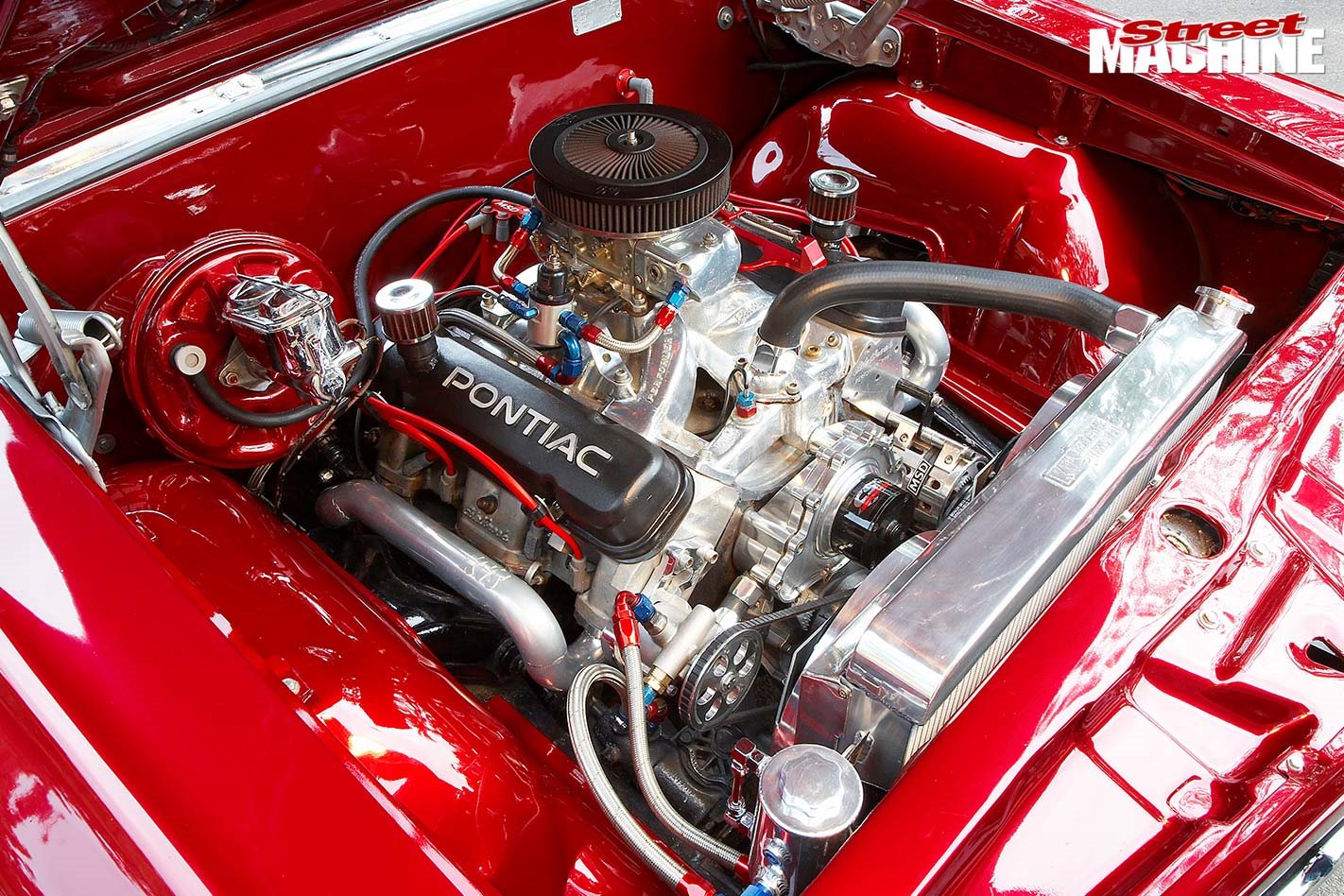 There is nothing Pontiac fans hate more than seeing a classic Poncho with the factory donk replaced by a Chev. It might take a little more time and research to get the big Pontiac motors pumping but the effort is worth it – this displaces 486ci and pumps 428hp to the tyres

It kicked off in 1955 with a 287-cube engine that quickly increased in size from year to year until it hit 389ci in 1959. The 389-cuber was the standard Pontiac V8 until 1967, and was available in horsepower ratings from a wimpy 215hp all the way to the high-performance 360hp unit in the GTO. In 1967 the bore was stretched again to give the engine 400 cubes and this 6.6-litre powerhouse stuck around until 1979. Running side by side through the years with these small-journal engines (287ci to 400ci) were a range of large-journal motors. So called because of their large (3.250in) main journals compared to the 3in journal in the 400ci engine, they started off at 421ci in ’61, and grew first to 428ci and finally 455ci. But these engines generally didn’t hit the mid-size muscle cars until 1970 because of an internal GM policy of not using 400ci-plus engines in smaller cars.

After 1970, the 455ci donk found its way into the GTO and the Firebird, as well as most of Pontiac’s full-sized fleet. They did make some short-deck versions in the late 70s and early 80s — namely the 265 and 301 but most Pontiac fans would rather forget those. 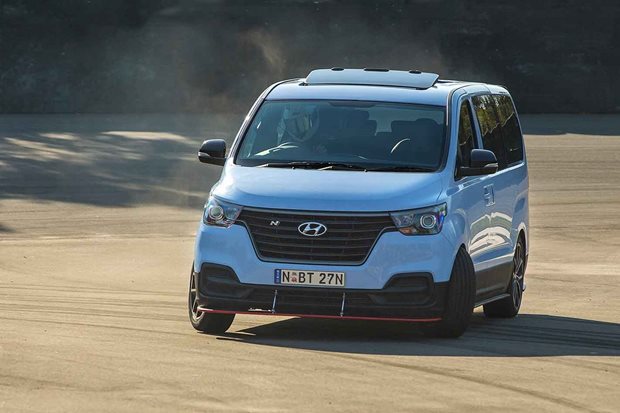