Drink in the unique details of Group B’s hero cars

GROUP B is one of motorsport’s most hallowed creations. It was, in its original sense, a fairly dry set of regulations, primarily used in rallying, that weren’t actually very well scripted.

The net result was fearsome power outputs in flyweight cars, giving birth to a golden age of rallying, yet the regulations lasted just five seasons (1982-86), before the world’s motorsport governing body stepped in and scrapped them on safety grounds.

Since then, the cars, drivers, and stories of Group B have grown in size and legend to almost epic proportions.

Road and race versions of the category now fetch into the millions of dollars at auction, and are some of the most revered vehicles on the planet.

So let’s dive under the skin and into the history of some of the categories most fascinating competition cars.

The Quattro moniker became the backbone of Audi’s performance arm and associated marketing. Its mention has long conjured images of white and yellow German rally beasts flying through forests, parting a veritable sea of people, set against a glorious five-cylinder staccato soundtrack. Suffice to say, the legend of Group B and the Quattro are one and the same – without one, would the other be as revered?

During the span of Group B, Audi homologated six different specifications of Quattro. The first was the Audi Quattro 80 A1 in 1981 (homologation number B-671), followed by the Quattro A1, 80 Quattro A2, two different Quattro A2 specifications, and finally the legendary and be-winged Audi Sport Quattro S1. 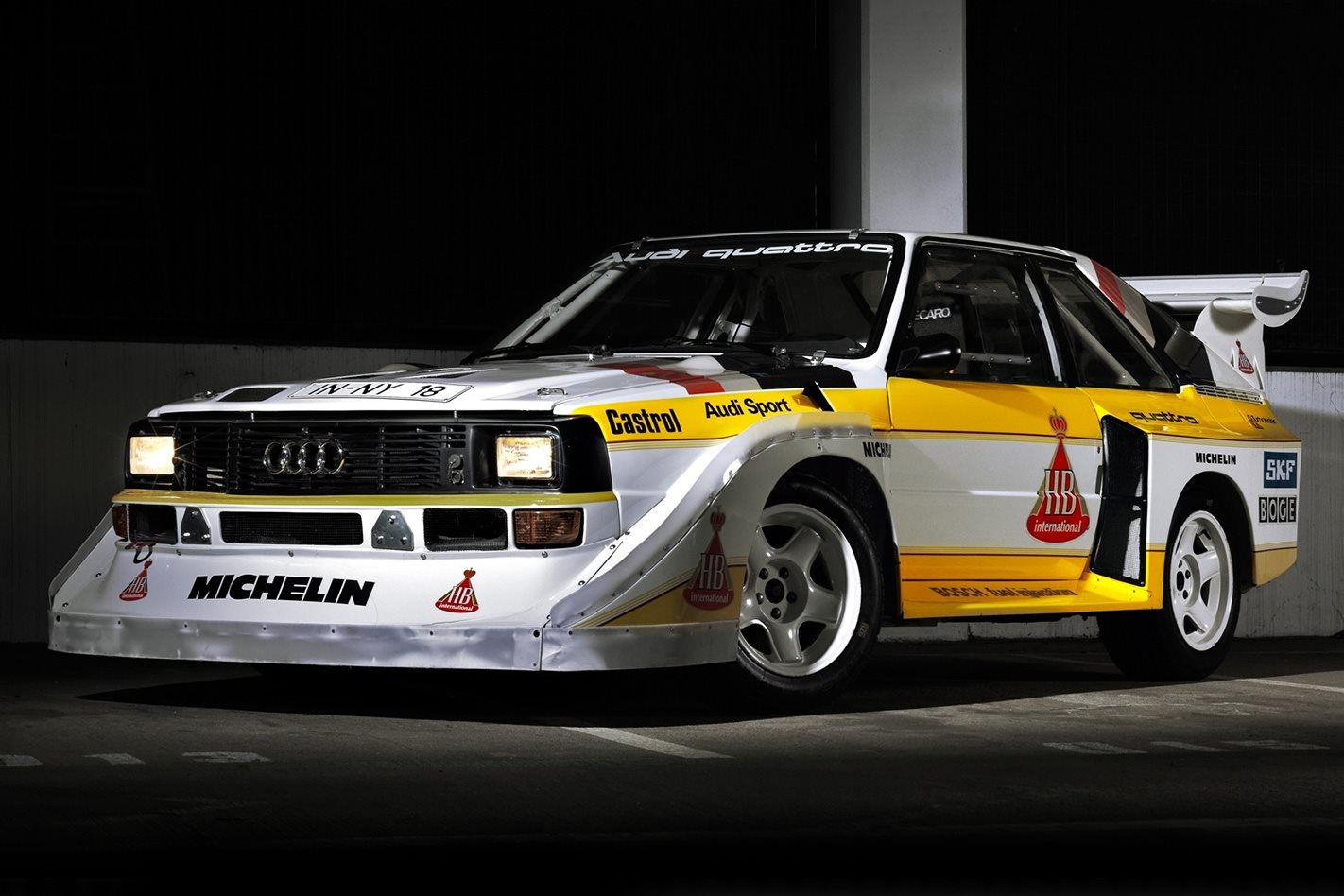 It is that last iteration, first homologated in 1984, that is the poster child for Group B regulations. Footage of Michèle Mouton soaring and sliding in the S1 is worthy of an Oscar in our books.

Tipping the scales at just 1200kg, the S1 had an all-aluminum alloy 2.1-litre inline five-cylinder turbo engine pumping out 331kW. Simple maths will let you know this was one hell of a weapon.

Bodywork featured carbon-kevlar panels, with wider arches and a shorter wheelbase over previous iterations, along with fatter rubber. 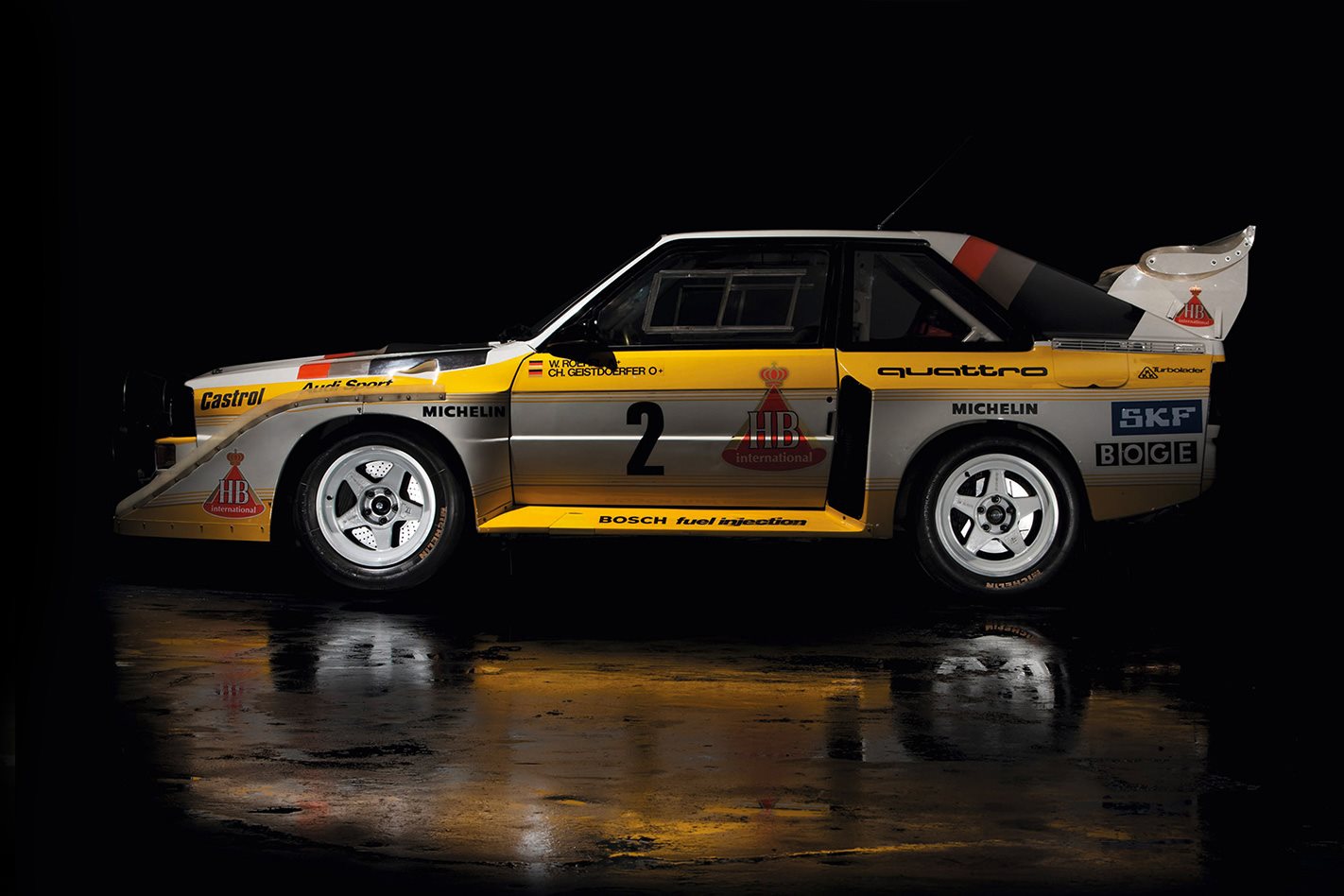 Audi said S1 E2 produced in the ballpark of 350kW. In reality, this was closer to 373kW at a sonorous 8000rpm. One of the unique changes with the S1 was a steeper windscreen rake, a request direct from the drivers in an attempt to reduce internal reflections and improve visibility.

At the end of its competitive lifespan, the Quattro had two drivers’ championships, and 23 rally victories.

While Ferrari has been taking part in motorsport events since, well, it was Ferrari, the Prancing Horse isn’t what you’d expect to see tackling a world rally stage.

More commonly associated with the Grand Prix circuits and endurance races of the world, Ferrari bucked tradition in the 80’s and one of Maranello’s got its hooves dirty. 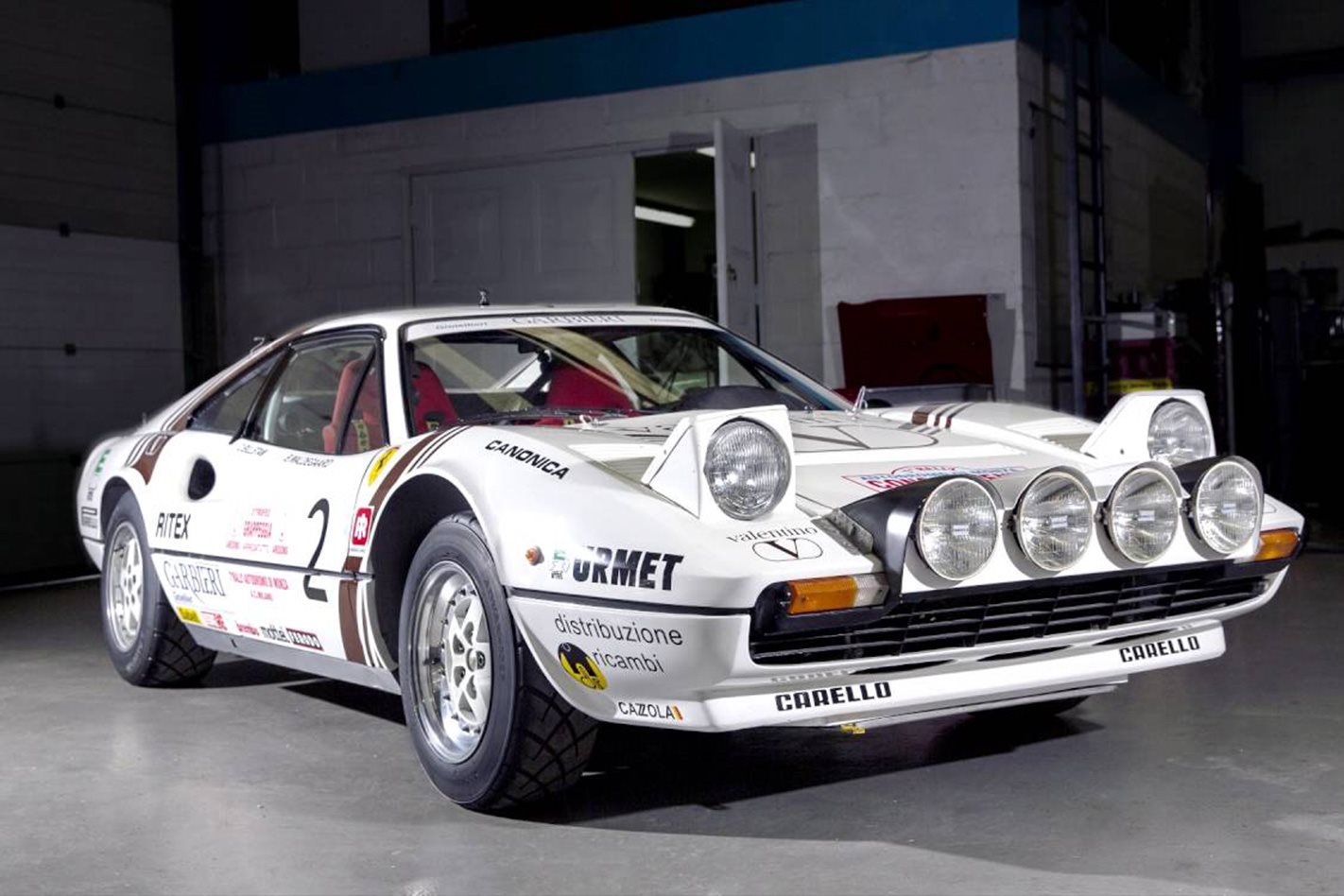 It needs to be noted this isn’t a factory Ferrari car – we can’t see Enzo Ferrari braving the wilds of Argentina to watch a rally – instead prepared and built by independent team Michelotto.

As you’d expect numbers are extremely limited, and they couldn’t really compete against the full factory AWD beasts of the time, but with a mid-mounted 3.0-litre V8, do you really care? 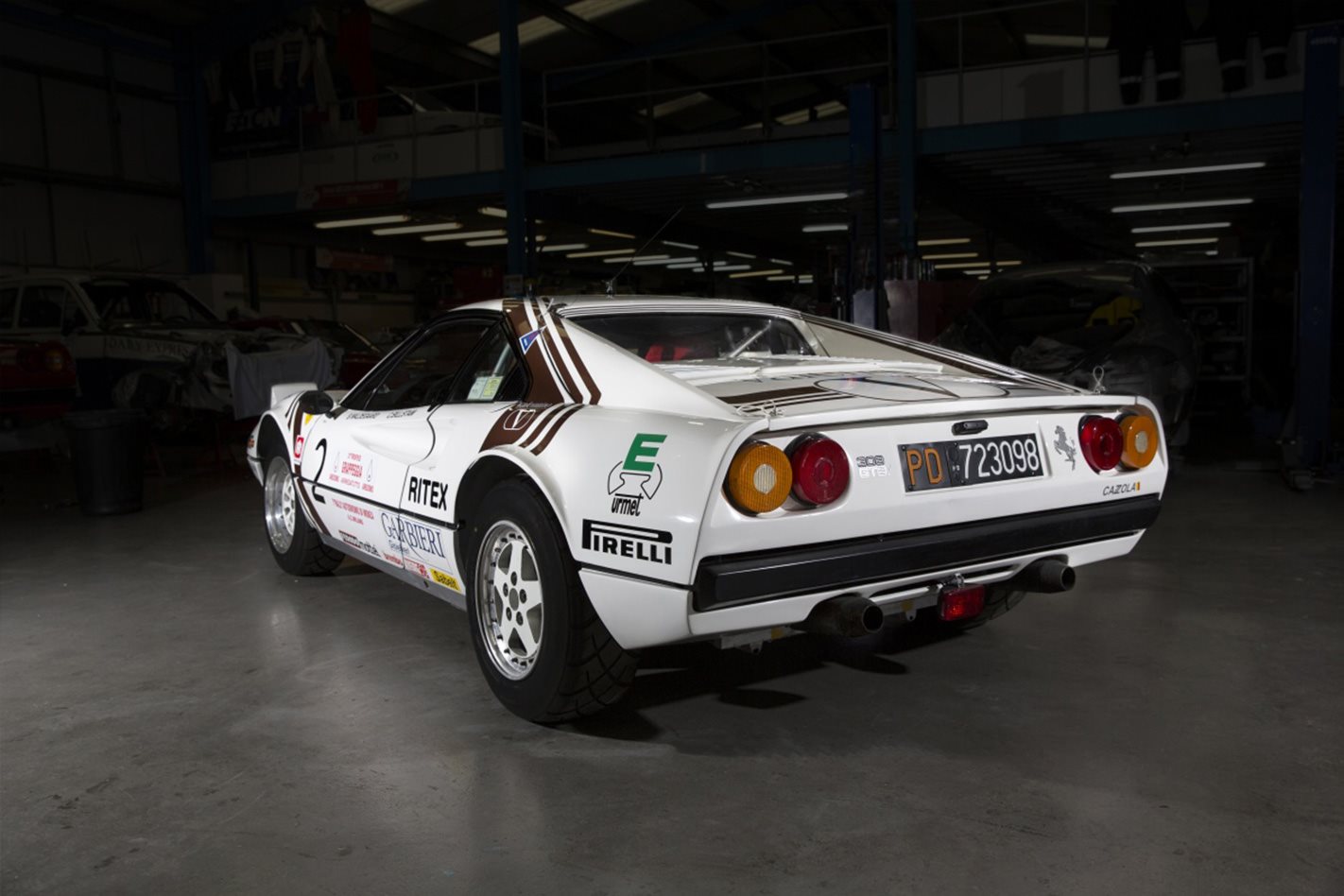 Power from that glorious engine was in the region of 335kW, a long way up on the road-going version as was traditional.

Much like every car on this list, once Group B went the way of the dodo, the 308 rally cars were left orphaned, without many options left for competition. Only existing in single digits, if you see one in the wild, at full song, count yourself among the lucky few.

Ford has this fantastic habit of building vehicles as a race car first, and then transforming them with minimal change into a road-legal form.

The RS200 is no different, starting life as a Group B monster before a limited run of road cars were produced.

The RS200 was initially born out of a failed attempt to build a rear-drive turbocharged version of the MkIII Escort for Group B regulations. Dubbed the Escort RS1700T, the development was plagued with problems and eventually abandoned after three years. With no vehicle in Group B, and in the hole for the failed project, Ford executives decided the team of engineers would then focus on developing a new, all-wheel drive, purpose built rally car. The result is the RS200. 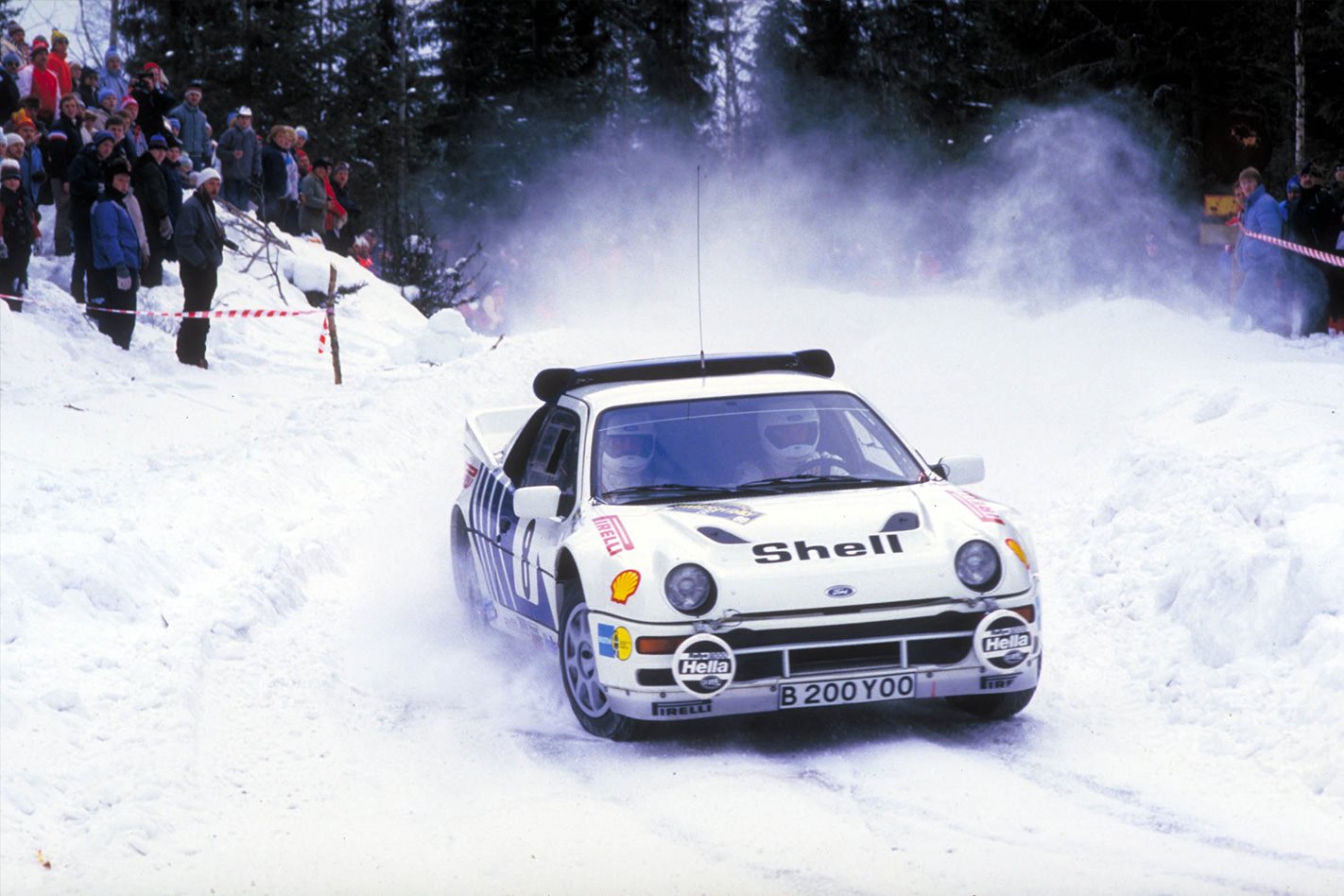 A Reliant-built plastic-fiberglass composite body was placed atop bespoke chassis, with a mid-mounted 1.8-litre turbocharged Ford-Cosworth “BDT” engine. In competition spec it produced 340kW. However, despite competitive poise and balance, the RS200 lacked a competitive power-to-weight ratio, and was plague by low-RPM turbo lag. Its best result in Group B competition was third at the 1986 Rally Sweden.

In a tragic twist, the RS200 played a central part in the downfall of Group B.  A crash at the ’86 Portuguese rally claiming the lives of three spectators and injuring others, was followed by a fatal crash, injuring driver Marc Surer and killing co-driver Michel Wyder after they impacted a tree in Germany later that year.

The death of Henri Toivonen and co-driver Sergio Cresto at the 1986 Tour de Corse had already piled pressure upon the FIA and the inevitable result was that the Group B regulations were abolished at the end of the 1986 season.

As far as iconic race cars go, a Martini-liveried Lancia Delta S4 sits pretty high on the list. First homologated for Group B in 1985, it entered 12 rallies, winning five of them. That is a win rate of almost 50 percent.

Lancia was taking full advantage of Group B regulations when it built the Delta S4, with just the bare minimum of road-going versions built. Power came from a 1.8-litre inline four cylinder which was twincharged – having both a turbo and supercharger strapped to it. 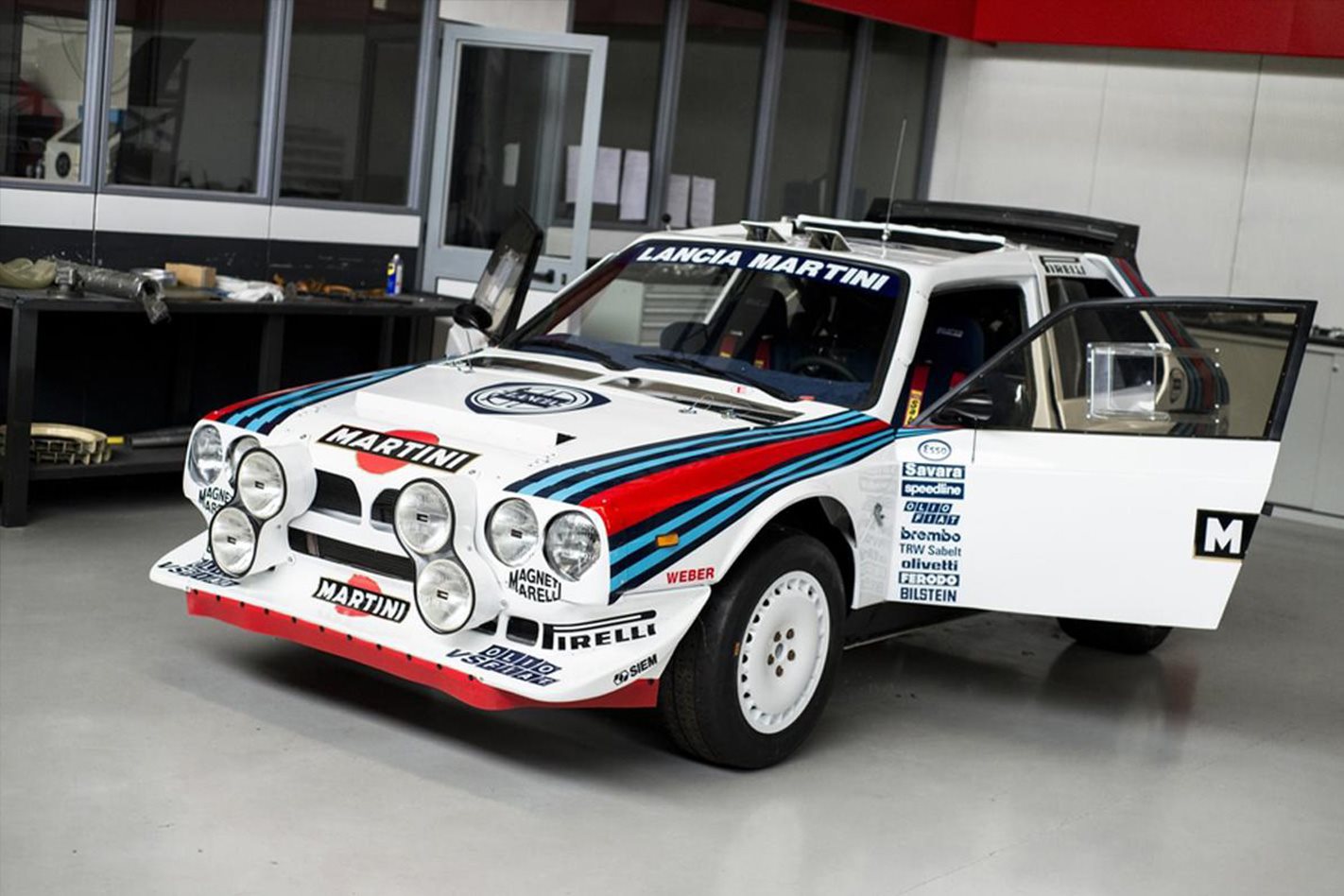 In testing, it was reported Lancia engineers pushed the engine to its limits, pumping a whopping 5 bar of boost through the unit, resulting in over 700kW. The S4 tipped the scales at a scant 890kg, and in competition form produced 375kW.

The S4 also had a trick centre differential, allowing the all-wheel drive system to send between 60 and 75 percent of power to the rear wheels.

If there was a single car that exemplifies the crazy innovation and limit-pushing of Group B, the Delta S4 is it. 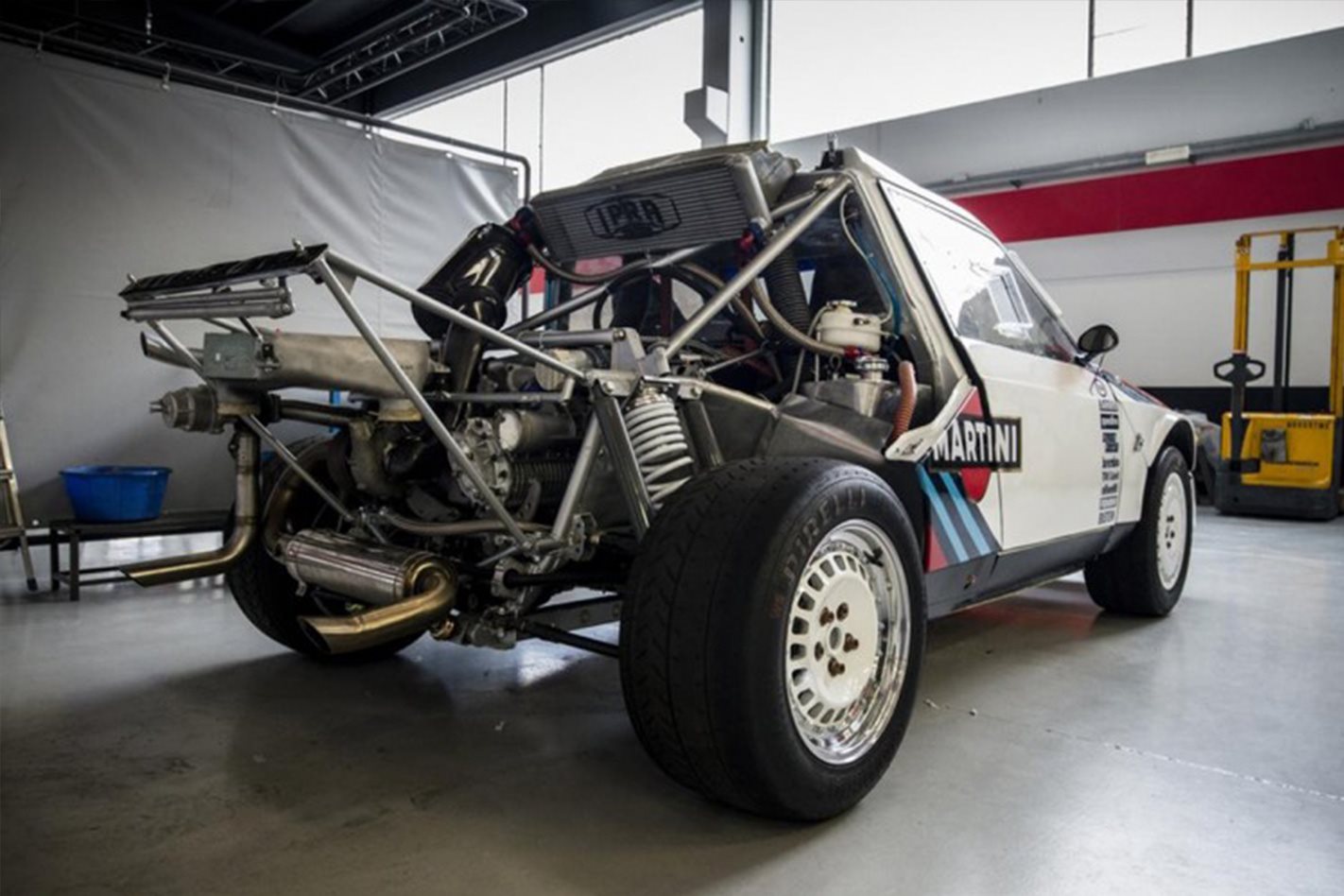 Preceding the bonkers Lancia Delta S4 was the Rally 037, famously known as the last rear-drive car to win the World Rally Championship. Debuting in 1982, it doesn’t have the same impressive record as its replacement, claiming just six wins and a single constructors’ championship from 62 rallies.

Powered by a supercharged 2.0-litre inline four cylinder, mid-mounted, the 037 weighed just 980kg thanks to a polyester resin body, reinforced with glass fibre and flame retardant. 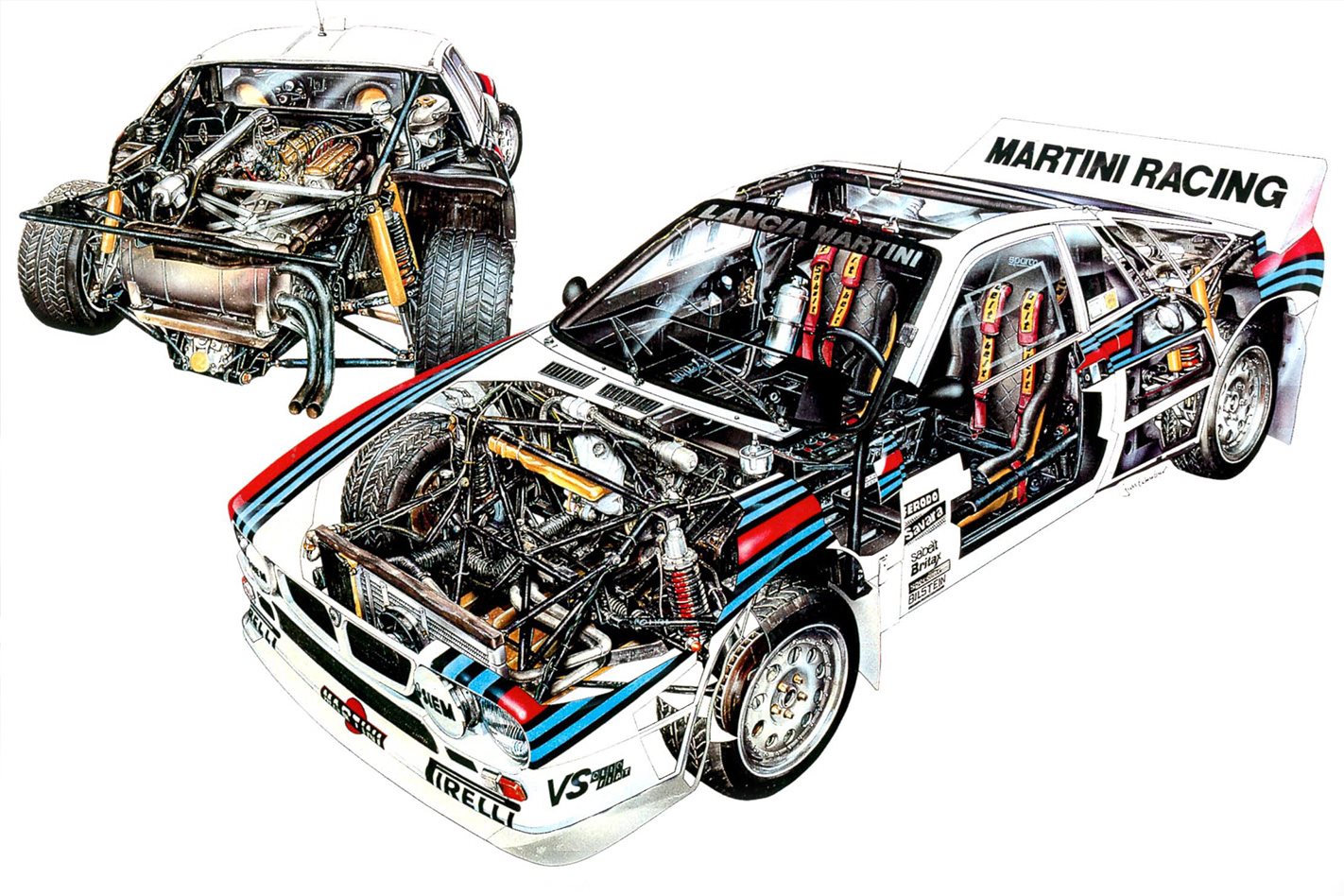 Where many of the cars on this list started life as, or quickly bore, road going cars, the MG Metro 6R4 Group B car bent the rulebooks in relation to homologation.

While technically based on the road going Metro, the 6R4 shared little other than a badge with the little city car.

A three-litre V6 engine was mounted back to front in the rear of the car, with permanent four-wheel drive. 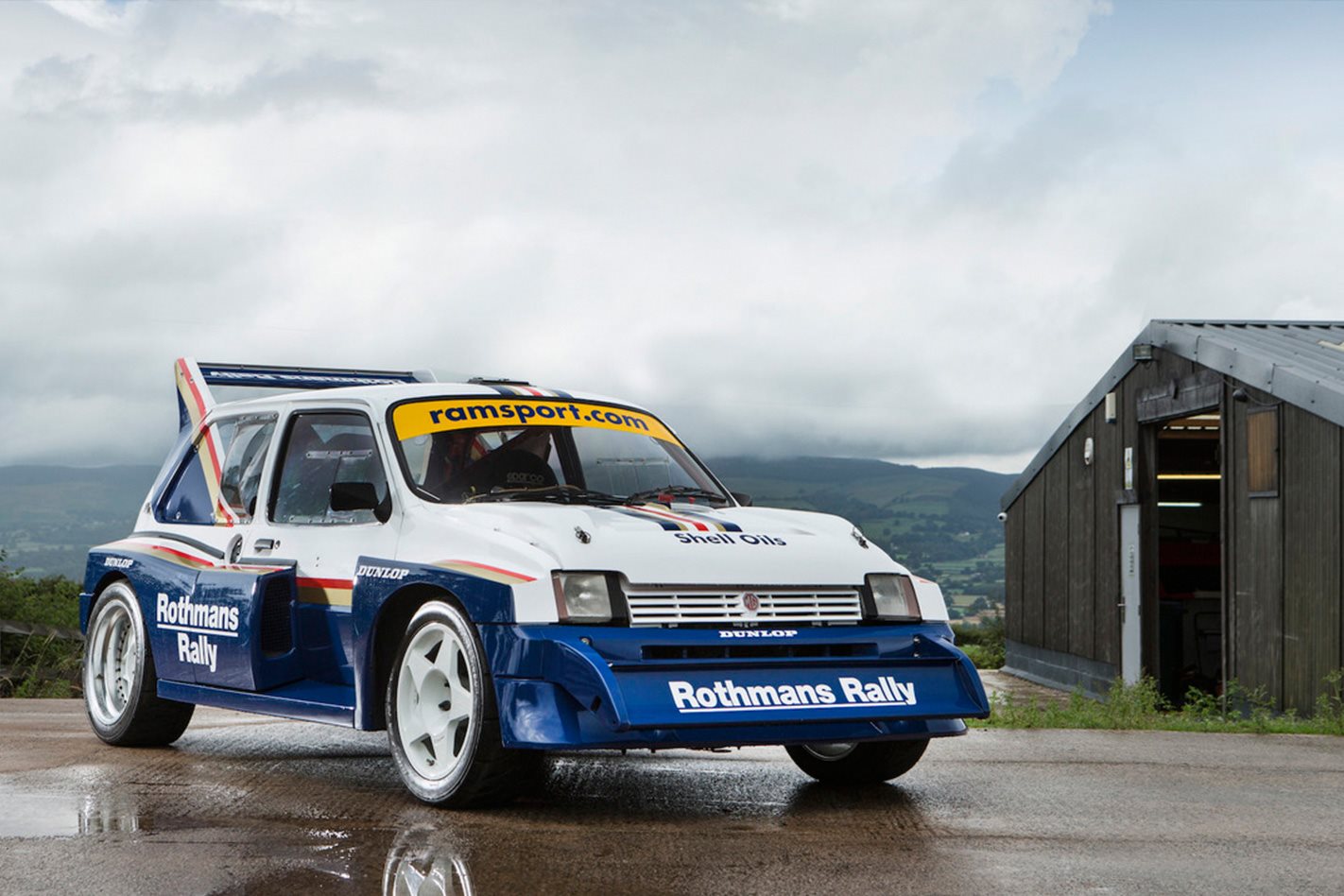 Standing out from its competitors at the time, the MG Metro 6R4 was naturally-aspirated, a rarity in a category dominated by forced induction.

The all-wheel drive system’s packaging was incredibly complex and unique due to the car’s compact stature, with one of the rear driveshafts actually running through the engine sump.

While it finished third on debut in 1985, the 6R4 failed for finish a single rally in ’86, the final year of Group B. 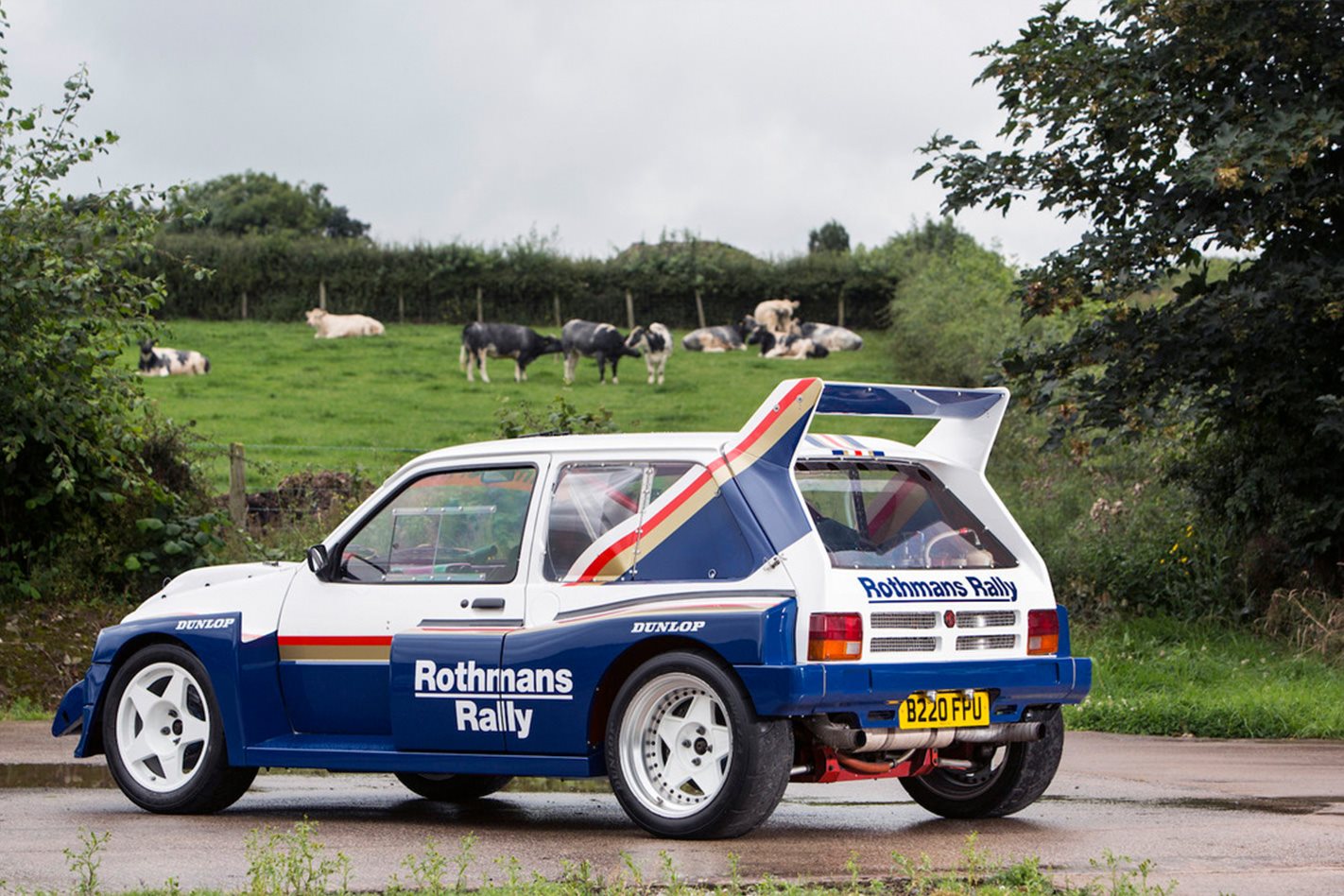 The little MG actually has a unique connection with Jaguar. When Austin Rover withdrew from rallying, all its engines and parts were bought by Tom Walkinshaw Racing, which then put the V6 engine in the XJ220 with a pair of turbos adding boost. The 6R4 turned failure into a measure of success, battling for honours with the also-defunct Ford RS200 on the European rallycross scene for a number of years.

Although the Porsche 959 never competed in Group B as part of the World Rally Championship, the iconic ‘80s supercar is intrinsically linked to the category.

Porsche earmarked the regulations as the perfect place to develop the next generation of technology for its road cars, and initiated a program to bring the 959 to life through competition. 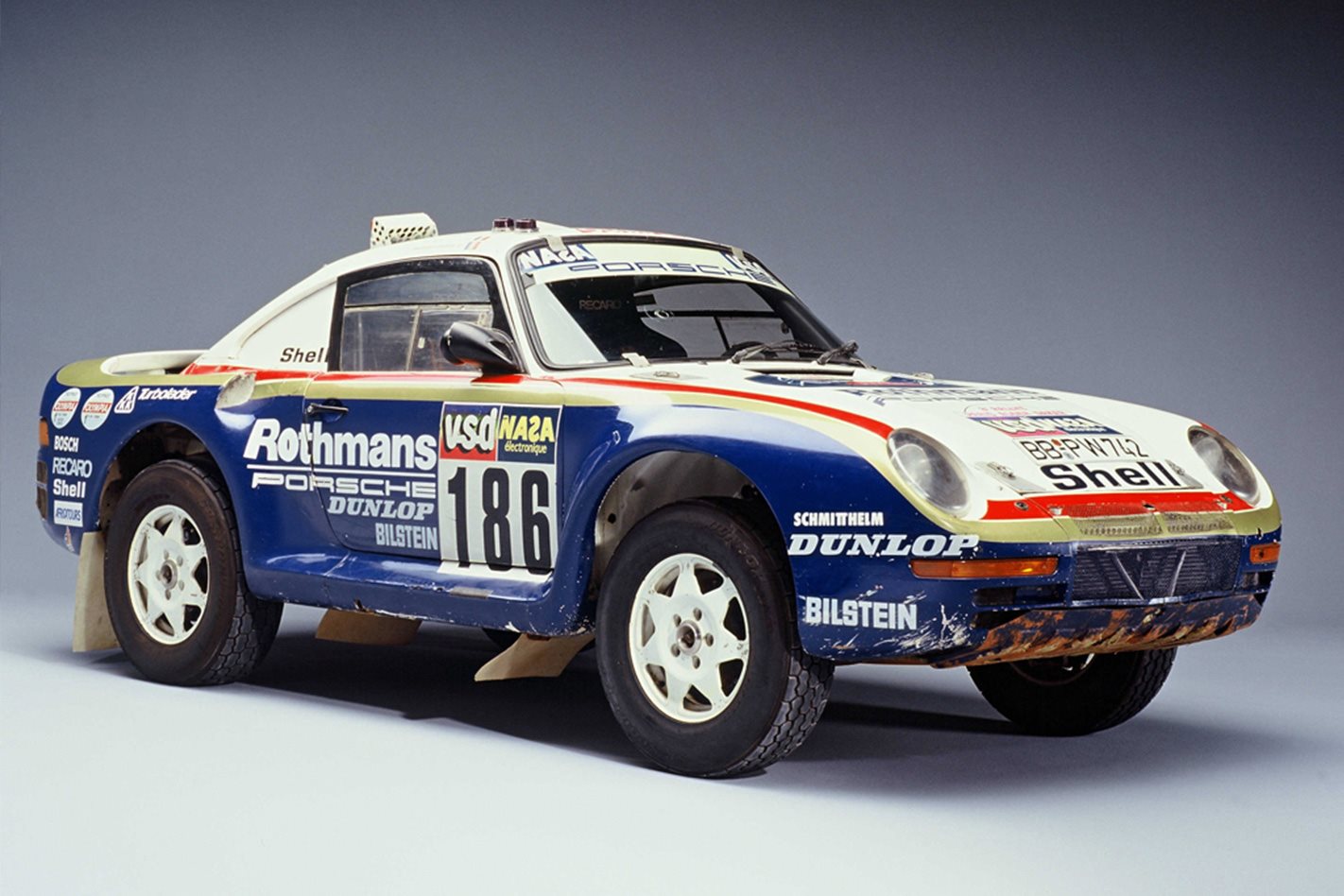 However, Group B regulations called for at least 200 production examples of a vehicle to be permitted to compete. The 959 was not yet created, which put Porsche in a bit of a predicament.

The solution? Take a 911, and modify it to 959 specification. While the franken-Porsches never competed on rally stages as a part of Group B, they competed in and won the Paris-Dakar Rally Raid.

A full assault on the World Rally Championship was ruled out due to the costs of completing a full season, and the imminent death of the category, but we can only imagine what it would have been like to see one of Porsche’s finest road cars taking to the world’s rally stages. 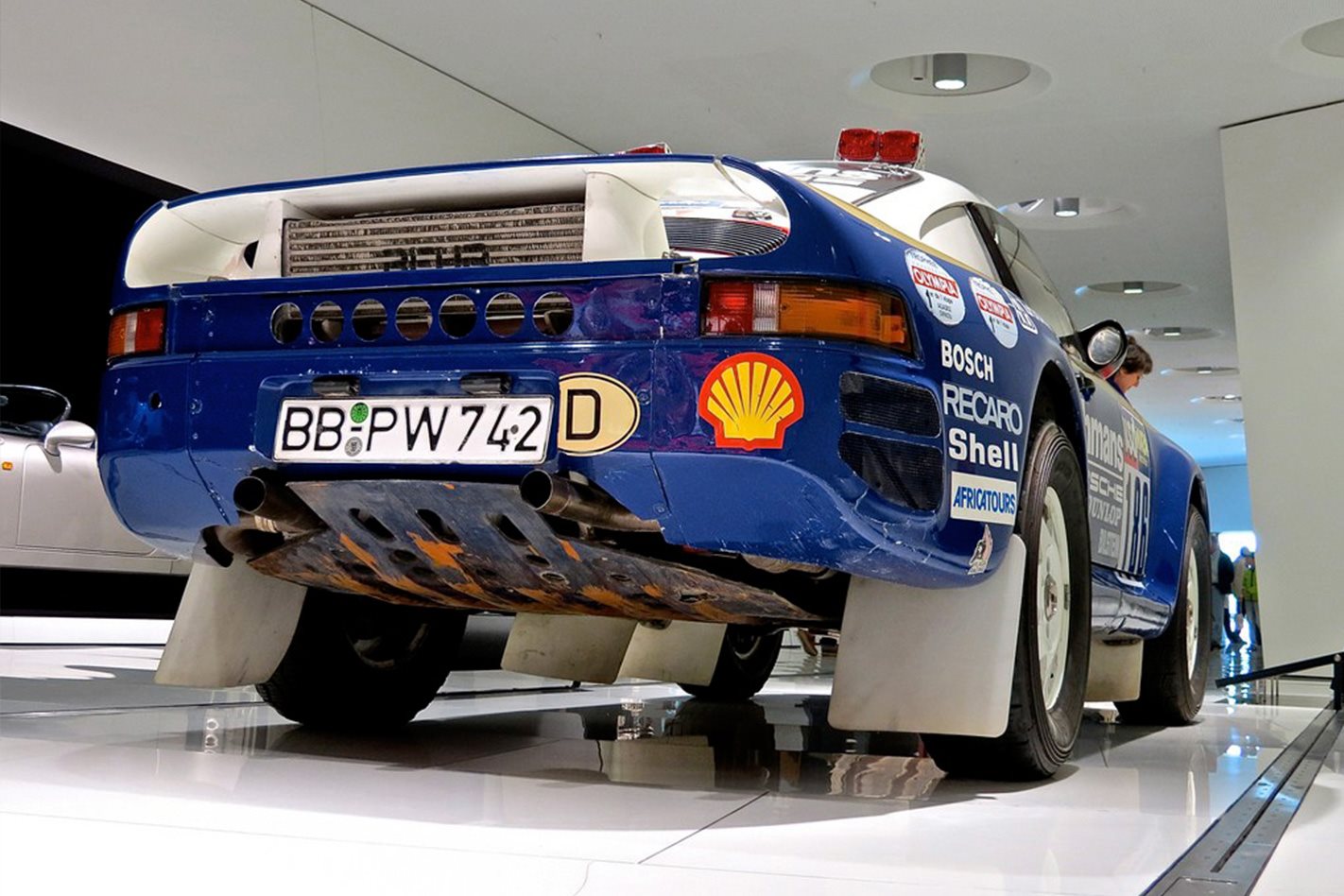