THE past couple of years have seen a flood of kick-arse go-fast bits for the venerable Holden V8 hit the market. While the iron lion will never enjoy the same level of aftermarket support that small-block Chevs and LS engines have, it is something of a golden age for those of us who remain loyal to Australia’s homegrown bent-eight. The newest of new hotness is Harrop’s TVS2300 supercharger kit. Harrop developed the crankshaft for the factory 5.7-litre Holden strokers in the mid-90s, so the company has been playing with Holden V8s for decades. The supercharger kit is centred around an Eaton-sourced rotating group, teamed with Harrop’s own locally developed housing and manifold, and intercooler and drive systems.

I was mighty impressed when the kit produced over 800hp on a built 355ci Holden (Mill Of The Month, SM, Apr ’19), and found myself wondering how it would perform on the $500 junker motor fitted to my beloved LC GTR Torana. And why not up the degree of difficulty by fitting it live and loud at Meguiar’s MotorEx as part of our Carnage Live activation?

With assistance from two of my mates, the objective was to drive the car into the hall naturally aspirated at the start of the weekend, and drive it out blown at the end. From there, we’d button up any remaining jobs at the Carnage workshop, then head to MPW Performance to see what it was capable of on the dyno. STEP 1. It might look pretty, but the engine is a $500 Facebook Marketplace special with unknown kilometres under its belt. I pulled the sump, intake manifold and rocker covers prior to fitting it and everything seemed in order, but it’s definitely a bone-stock, well-worn example. Performance modifications are limited to extractors and a twin 2.5in exhaust system, a pod filter and a Haltech GM Sport ECU. 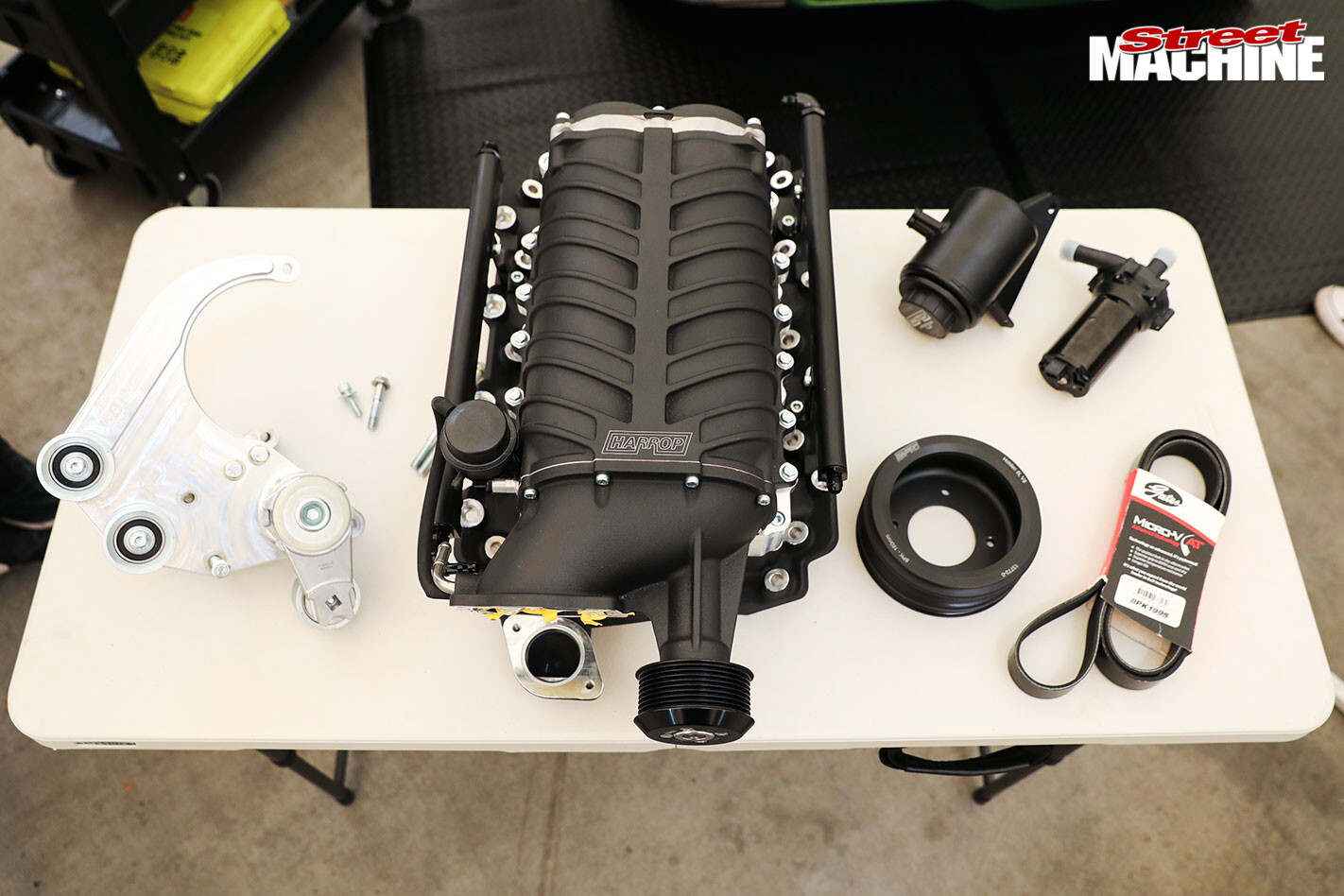 STEP 2. Here are some of the major components of the kit: the CNC-machined billet alternator bracket and idler assembly, the compressor and manifold, crank pulley, intercooler fluid reservoir, electric water pump and drive belt. We used the blower housing with a forward-facing inlet, but Harrop also offers a version that points towards the factory airbox location. We can confirm that it is compatible with both electric and mechanical water pumps. My engine runs a CVR electric water pump, and you’re able to simply leave the water pump out of the belt path by using a shorter belt, which Harrop can supply. STEP 3. It’s important to note that Harrop refers to this as a “tuner” kit. Due to the wide range of vehicles and applications these Holden V8s have found their way into over the years, it’s impossible to engineer a complete package to suit everyone. So it’s up to you to source a throttlebody (four-bolt LS-style), intake and air filter, fuel system and injectors, and an engine management solution to suit your application, as well as brackets for the heat exchanger and reservoir. I retained most of the fuel system the car had when it was naturally aspirated: a Holley lift pump to a boot-mounted surge tank, and a single Bosch 044 main pump. I upgraded the fuel pressure regulator to Turbosmart’s sharp-looking FPR1200, and the injectors to Raceworks 1300cc units – huge for our application, but I wanted headroom for a built engine and E85 down the track. We used an Aeroflow throttlebody, custom MPW-built intake elbow and K&N pod filter. I also replaced my aging Haltech E6GMX ECU with the brand’s more modern Sport GM computer – a very capable plug-and-play solution for the Holden V8. Harrop stocks a number of different heat exchangers for the intercooler system, and we found that the Toyota 86 exchanger best fitted the front of the Torana. 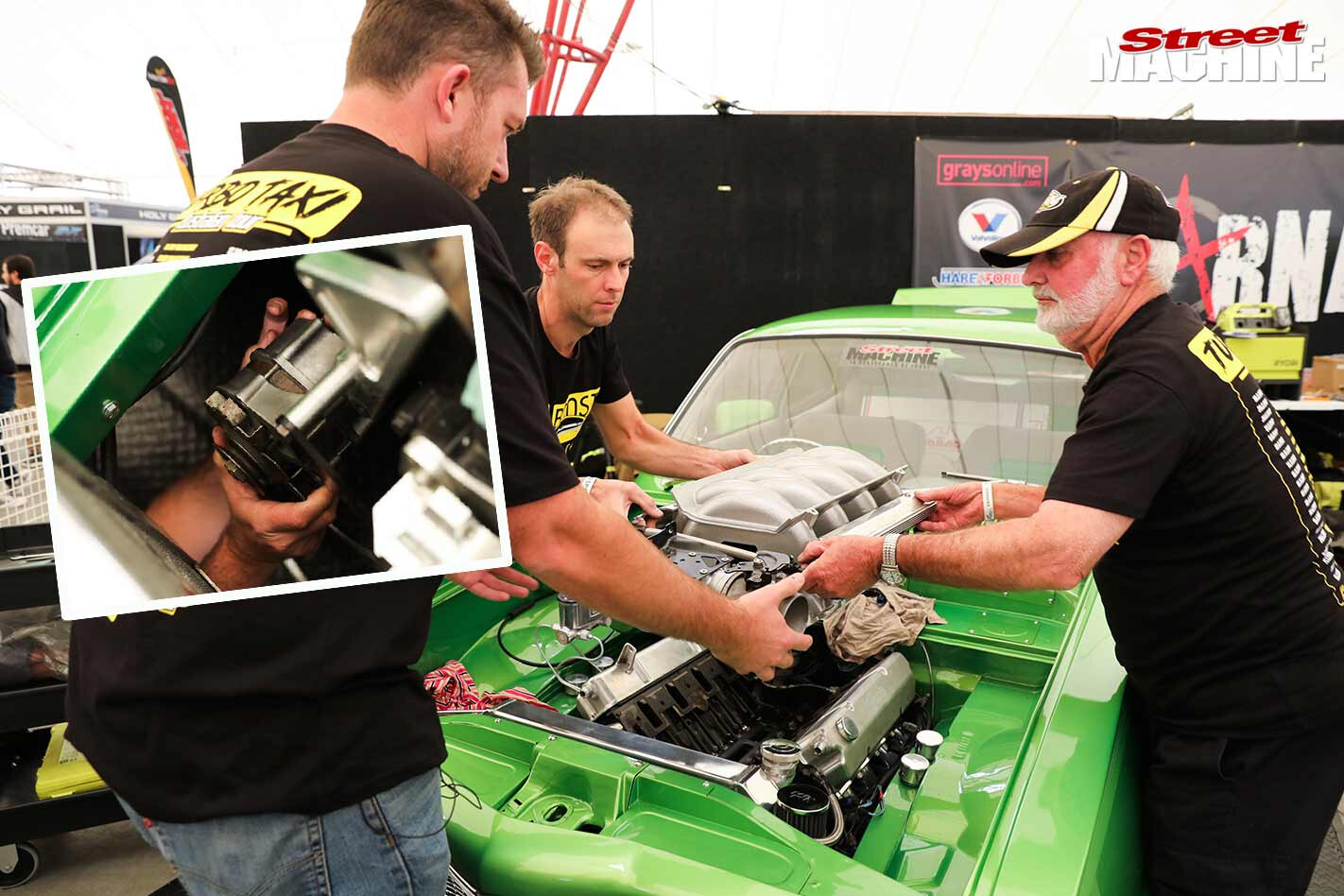 STEP 4. First up we removed the engine cover, intake tract and factory bunch-of-bananas intake manifold. This of course meant disconnecting factory wiring for the injectors, TPS, IAC and coolant temp sensors, as well as the fuel lines, vacuum hoses and top radiator hose. I had the alternator mounted down low on the driver’s side of the engine with a Lowe Fabrications alternator bracket, but the Harrop idler assembly has an integrated bracket that positions the alternator in the factory Commodore location on the driver’s side, so we removed the alternator and existing bracket. Incidentally, the wiring for the alternator was the only wiring we needed to extend – everything else plugged straight in. 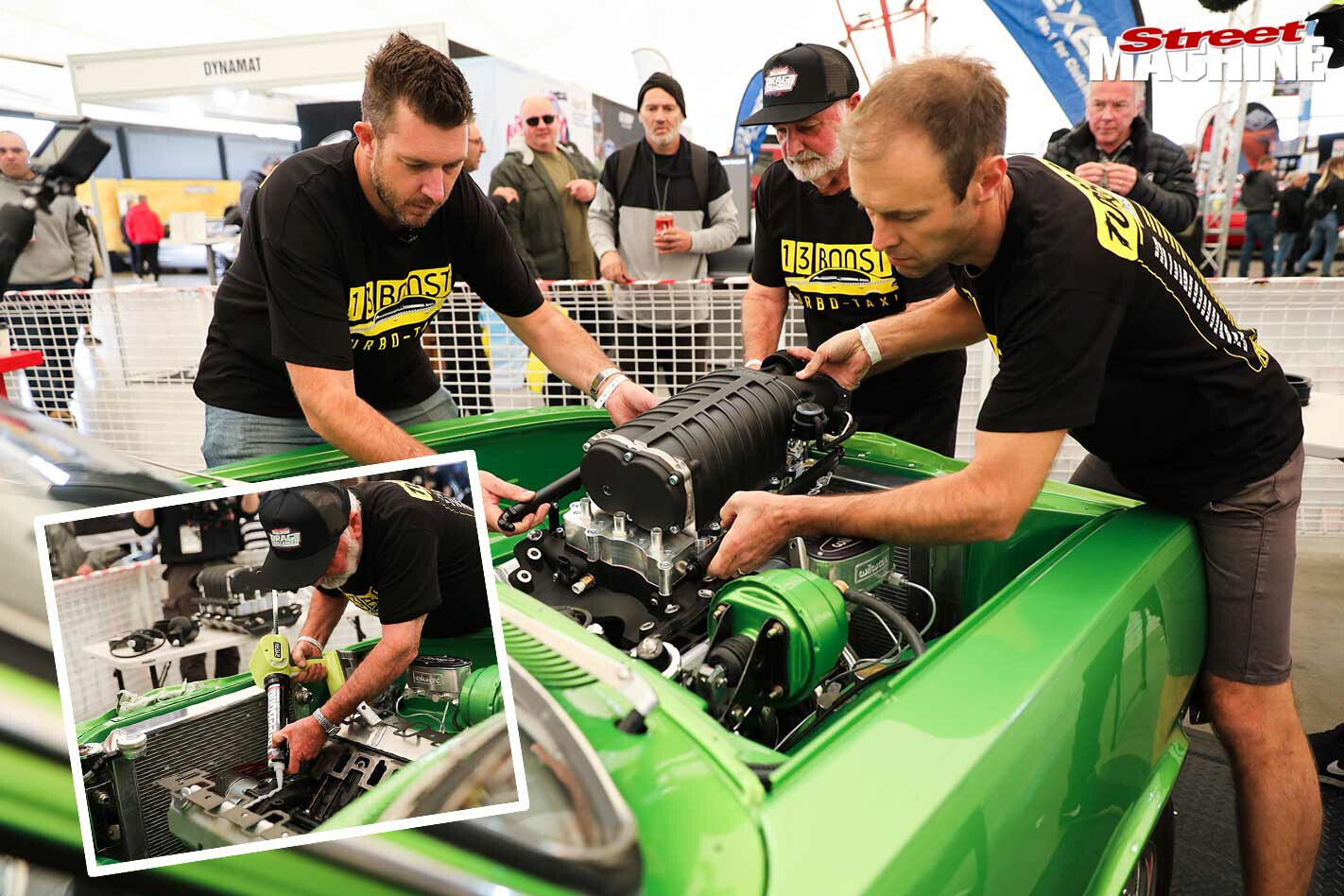 STEP 5. From there we stuffed the valley with rags and cleaned up all the gasket surfaces, then positioned the new intake manifold gaskets and ran a bead of silicon along the front and rear of the valley. Fitting the blower itself is no more difficult than removing and replacing an intake manifold. It comes with the blower manifold, intercooler and compressor all pre-assembled as one unit, so simply plonk it down directly onto the top of the engine and bolt it on using the factory fasteners, or shiny stainless Allen-head bolts, as we chose. STEP 6. The idler assembly and alternator bracket bolts into place using the holes in the passenger-side cylinder head. This version of the assembly was developed specifically for LC/J Toranas, and positions the alternator higher and closer to the engine than the standard kit for increased chassis rail clearance. Harrop also offers a standard version of the kit for cars with larger engine bays such as Commodores. STEP 7. With the idler assembly fitted, you need to rattle the factory pulley off the alternator (the kit is designed for Bosch BXH1238A Holden V8 alternators) to fit the Harrop pulley. If you’re luckier than me, you won’t have Bubba heckling you from the sidelines while you do it. Once that’s done, you can hang the alternator off the Harrop bracket. STEP 8. Once you’ve also removed the factory crank pulley and replaced it with the Harrop item (different sizes are available to suit your desired boost level), it’s time to fit the drive belt. With some leverage applied to the tensioner using a socket and breaker bar or ratchet handle, you can slip the belt on. The belt path and belt length varies according to whether you run an electric water pump (like I do) or a mechanical water pump, but Harrop will address this when speccing your kit. STEP 9. We needed the intake tract to take a 90-degree bend towards the driver’s side straight out of the blower due to the Torana’s compact engine bay, so Adam at MPW knocked up a neat lobster-back alloy elbow, to which we then bolted the Aeroflow throttlebody. The kit is engineered for an LS-style throttlebody, and if your TB of choice doesn’t come with a TPS and IAC valve, you’ll need to source those too. The IAC was something I overlooked, but was lucky that a generous SM reader donated one to the cause and delivered it to MotorEx for us. Thanks again, mate! 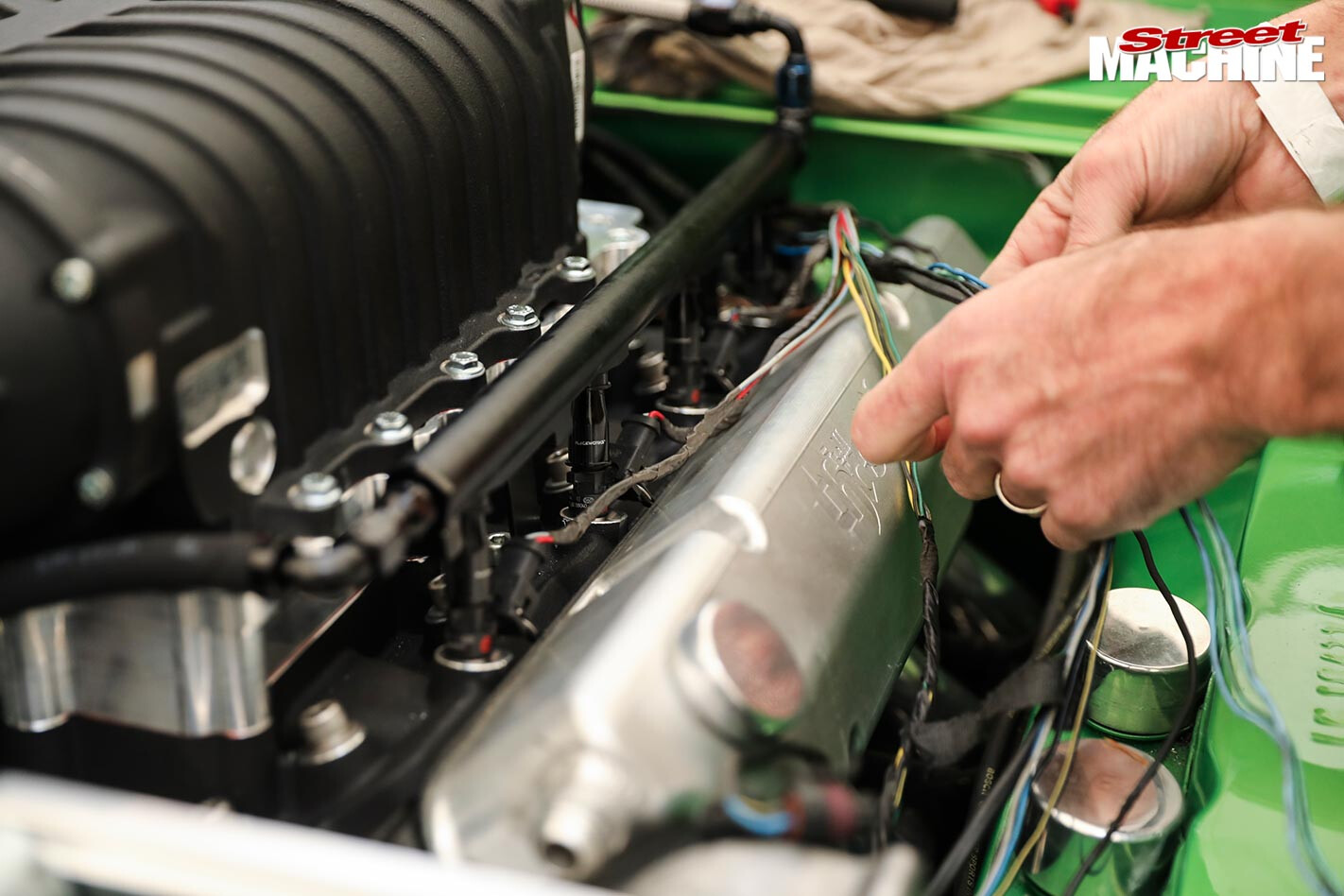 STEP 10. Fit the injectors to the rails, then reconnect the wiring and fuel lines. My car runs a –8 feed and –6 return line, so getting the Harrop fuel rails to talk to the existing fuel lines was as easy as sourcing some screw-in AN fittings. The exact fittings you require will depend on how you’ve configured your fuel system. The wiring side of things is very straightforward, with all sensors fitting straight up in the factory locations, though the coolant temp sensor required an off-the-shelf reducer. 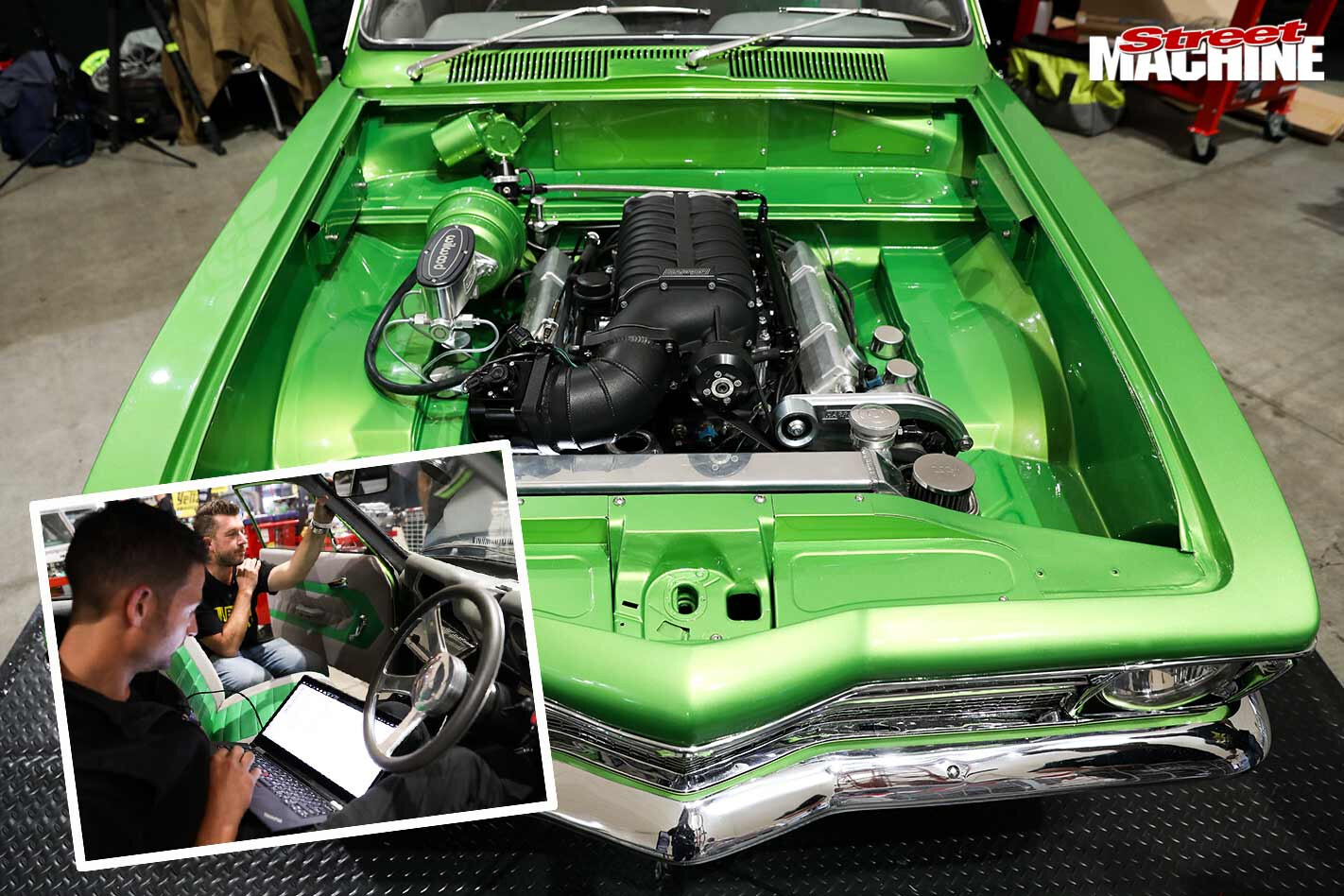 STEP 11. Isn’t it pretty! With all the wiring and plumbing attended to but the intercooler system and air cleaner still left to sort, we couldn’t resist the temptation to fire the car with the blower for the first time. Adam from MPW came and loaded a base map into the Haltech, and after we overcame a wiring issue that was causing the injectors to stay open (my bad, folks), it fired straight up then sat there and idled happily. I don’t mind telling you that the feeling of driving the car out of the hall at MotorEx with the blower happily whining away was pretty hard to beat! STEP 12. Back at the Carnage workshop, it was time to install the intercooler system, tie up a couple of loose ends and run a spanner over the car before taking it across to MPW to see what Adam could fetch out of it on the dyno. STEP 13. Perhaps the biggest challenge of the job was mounting the heat exchanger. There’s not a lot of real estate to play with in the front of an early Torana, especially considering I run quite a large thermo fan in front of the radiator. After clearancing the factory bonnet catch support with the grinder, Scotty was able to knock up some brackets off the factory radiator mount bolts to securely mount the heat exchanger. It’s a neat fit! 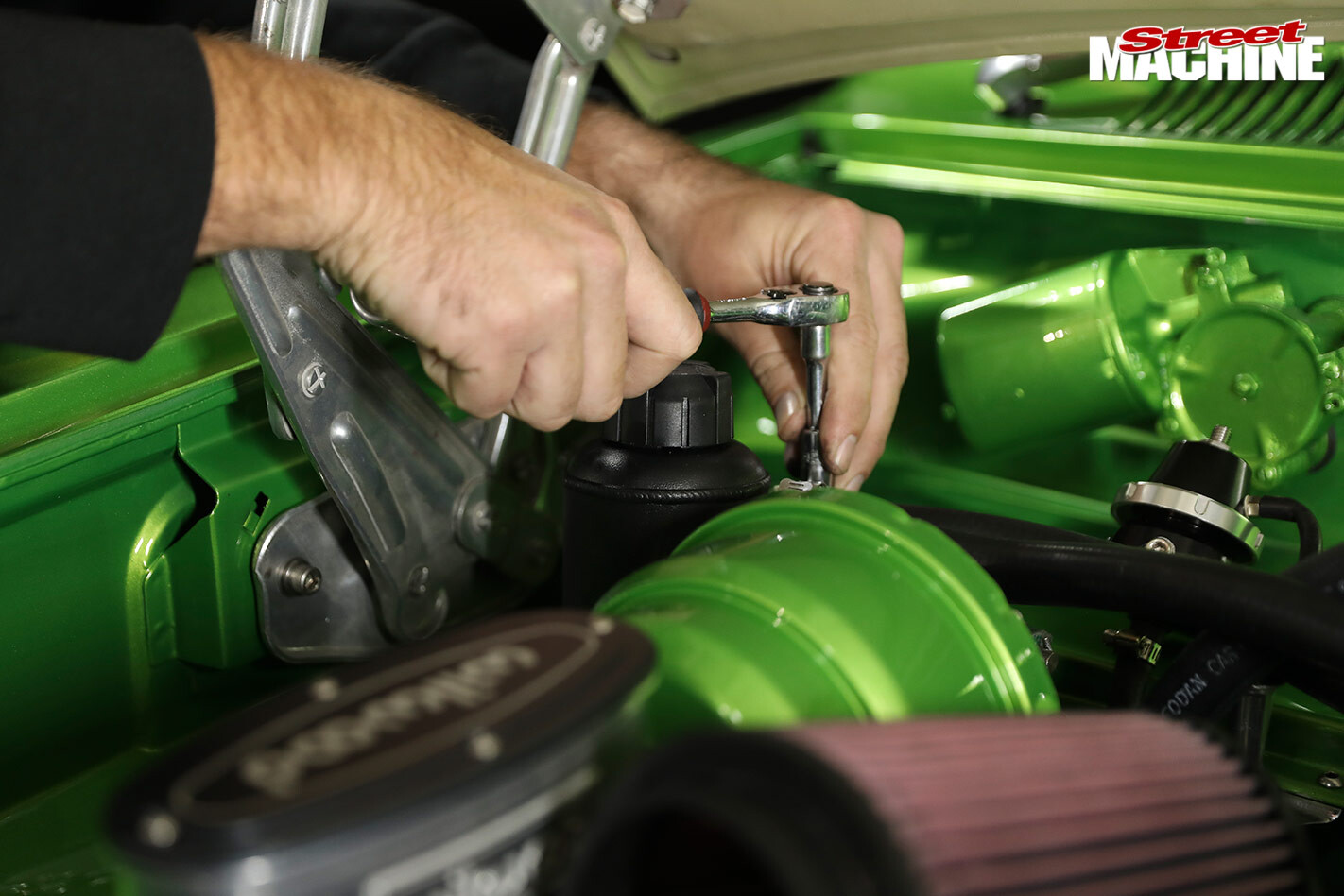 STEP 14. We reasoned that behind the brake booster was the most out-of-the-way place to mount the coolant reservoir for the water-to-air intercooler system. We knocked up a bracket out of some scrap steel that again picked up some factory bolt holes, and the job was done. It’s critical that the reservoir is positioned at the highest point, otherwise you’ll end up with airlocks in the system. STEP 15. I chose to mount the pump under the front driver’s-side guard with the supplied hose clamps off a pre-existing bracket, which again meant no further drilling or cutting. The pump comes with a terminated harness that makes wiring a cinch. STEP 16. With the main components of the intercooler system fitted, all that’s left to do is plumb, fill and bleed the system. We followed the supplied plumbing diagram, which saw the coolant path travel out of the blower into the coolant reservoir, then into the inlet on the heat exchanger, out of the heat exchanger into the pump, and then back to the centre port on the blower. It’s important that you use coolant that conforms to GM6277M. We chose Valvoline Dex-Cool. STEP 17. The finished product! With everything buttoned up, topped up and bled, and a fresh dose of Valvoline fluids throughout, it was time to hit the rollers at MPW and see how much my $500 mystery motor likes the boost! 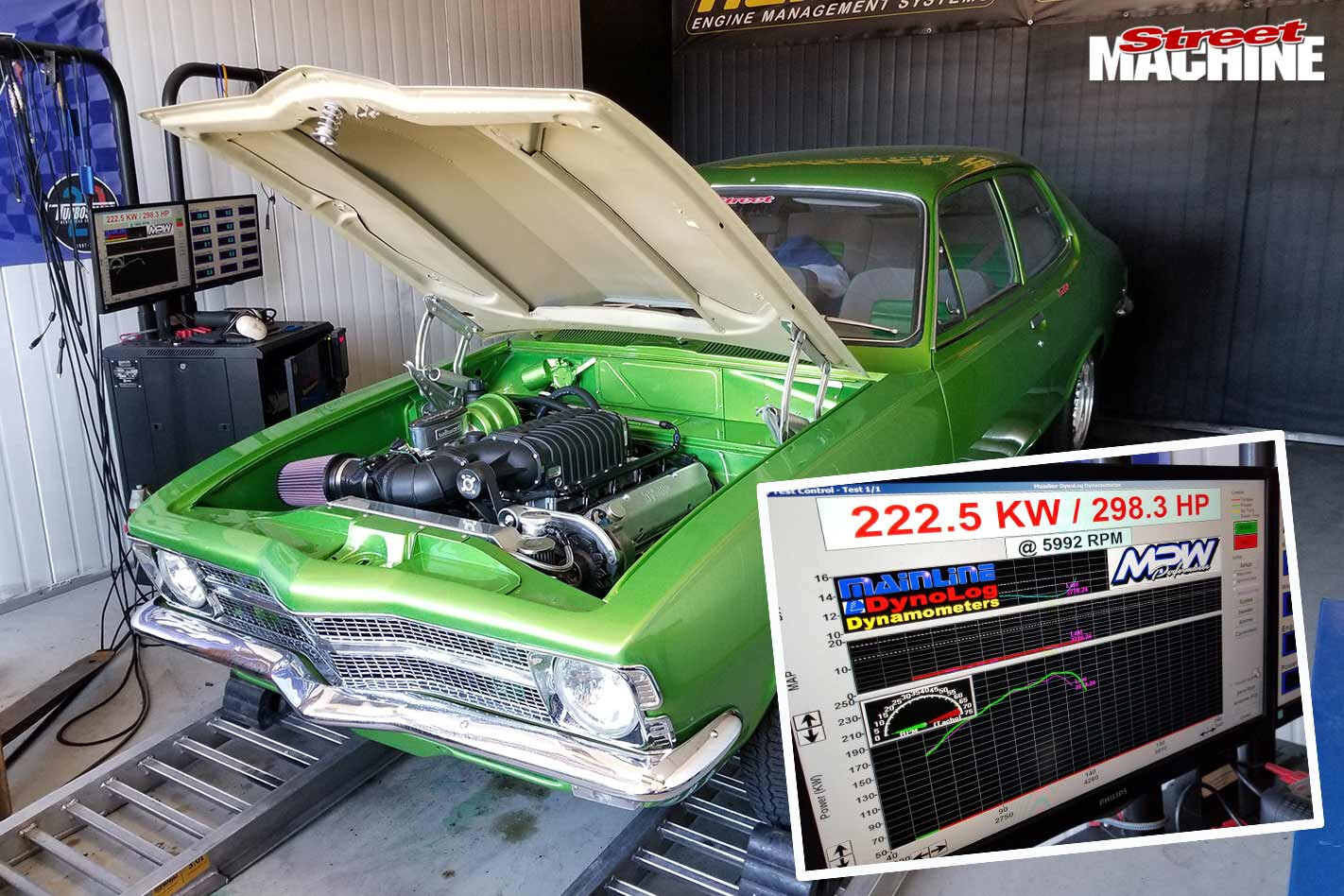 STEP 18. With Adam on the keyboard and a custom tune loaded into the Haltech, we pulled the string on the little Holden and managed just shy of 300rwhp on pump fuel. The pulleys were configured to deliver 10psi, so Adam was very conservative with the timing in the interest of preserving the engine, given that it’s a bit of an unknown quantity. Considering that a stock five-litre generally makes around 160rwhp, I’m pretty stoked with the outcome and can’t wait to run a number in it at the track. Stay glued to whichcar.com.au/streetmachine to see how I go!