Jaguar Land Rover announced last year that they would once again be putting inline six-cylinder engines into its cars and SUVs, phasing out its venerable range of V6 petrol motors in the process.

But why is this engine overhaul important? With both the old V6 and the new inline six displacing an identical 3.0 litres, will you even notice the change from behind the wheel?

It’s a question that also applies to those following developments at Mercedes-Benz, which has also made a similar switch from V6 powerplants to inline sixes. BMW, meanwhile, never moved away from the inline six format. So, why the resurgence of interest in a type of engine that many thought was dead?

Well, though the cylinder count remains the same, the switch from arranging them in two banks (as in a V6) into just one brings some surprising differences. Here are the ones that will matter most to you, the driver.

An inline six is actually more refined than a V6 with the same displacement. In fact, improvements in refinement were one of the main reasons why Jaguar Land Rover decided to switch back to inline sixes (an engine configuration the company had abandoned decades ago in favour of V6s).

V6s, by contrast, do not enjoy the same harmonic advantage.

There are certain other advantages to the inline-six configuration – advantages that focus on making power through more intelligent packaging.

With turbocharged six-cylinder engines effectively taking the place of bigger V8s in many modern cars, the simpler in-line layout provides more space to put performance-enhancing devices such as turbochargers, superchargers, and their associated plumbing.

A V6 engine, meanwhile, must either find room in the valley between each cylinder head (such as in turbocharged V6-powered Audis) or in the limited space on either side of the engine (Like Nissan’s GT-R) which makes for a cramped and complex turbocharger installation. Shoehorning in other power-adders like electrically-assisted turbos and/or superchargers would be extremely challenging on a V6.

And with performance cars increasingly making use of electrically-boosted turbos and superchargers – often both in the same installation in a lag-reducing sequential arrangement – having a maximum of space to place these things means greater performance potential.

It’s somewhat ironic, given one of the big reasons for the adoption of V6 engines decades ago was their compactness and ease of packaging – but that was back in the day when turbocharging wasn’t as commonplace as it is now.

This benefit can vary depending on how an individual car is engineered, but generally speaking inline sixes tend to generate more pleasing exhaust notes than their V6 counterparts.

Why? Because having all six exhaust ports on the same side of the engine means they can be merged together in a way that neatly separates the exhaust ‘pulses’ from each cylinder, something that’s harder to do on a V6 (but not impossible). Result: sonic bliss for straight-six performance cars.

Here’s the REAL reason why inline sixes are making a comeback. It’s now more cost-effective for carmakers to simply set some core dimensions for their inline engines and add or subtract cylinders as necessary – an engineering technique known as ‘modularity’.

BMW has been doing it for years now – its inline six, inline four and inline three engines all share the same critical bore-spacing (the distance between each cylinder) and cylinder displacement measurements as each other, the main difference being how many cylinders are cast into their engine block.

MORESubaru diesels and six cylinder engine on the endangered list

That’s not something that can be easily done with a V6 format. Mercedes-Benz tried to do so by making its first production V6 a shortened version of its existing V8 engine architecture, but it introduced compromises in design (namely the use of a 90-degree angle between each bank of cylinders, rather than the 60-degree angle that’s more common for V6s) that gave the six-cylinder motor poor refinement.

And that saves money by allowing the same production line to process different engines of different sizes. What’s that mean for you? Simply put, manufacturers can use the money saved in engine design and production on other things, like in-car technology, higher-quality materials, or simply keeping the price tag as low as possible.

Safety concerns were a primary reason why V6s took over from inline sixes, with their shorter length allowing bigger crumple zones and minimising the chance that the engine might enter the cabin in a massive frontal collision. It was a primary reason for safety-conscious Mercedes-Benz, so why is the company moving back to inline-sixes for its large cars?

Technological advances mean that the engine’s 'accessories' – the power steering pump, air conditioning compressor and alternator – no longer have to be mounted off the front of the engine, a position that added overall length to the engine.

Now able to be electrically-driven, they can be positioned elsewhere in the engine bay and thus bring the dimensions of a straight six down to a level where crash safety isn’t compromised.

The height of inline engines was another safety issue, this time for pedestrian protection. Again, technology comes to the rescue here, with pop-up hinges now able to physically lift the bonnet to give unlucky pedestrians more clearance from the hard metal of a cylinder head.

So what have we got to look forward to?

There are so many performance car heroes of the past that feature inline six-cylinder engines. If the new brace of straight-six engines are anywhere near as good as this lot, we're in for a good time. Britain’s TVR was ambitious to name its inline-six after Bentley’s own famous 6.5-litre. But its resulting engine honoured the legendary name well.

The story goes TVR had dreams to build a road version of the 7.7- litre V12 GT1 Cerbera Speed 12 – until company boss Peter Wheeler decided it was too dangerous. Mercedes-Benz’s M256 returned to lining six pots in a row after it ditched the layout in 1999 to focus on vee engines. Found today in AMG’s 53-badged variants, the M256’s genius lies not in V8-upsetting grunt but hybrid integration.

The 48V battery system powers ancillaries like A/C and the water pump, as well as the electric supercharger, to not only free up the engine from parasitic belt drive but aid turbo spool as well. The electric motor on the output shaft then plays both starter motor and power booster, helping deliver 320kW and sometimes as much as 770Nm.

The result is an incredibly smooth, strong feeling engine that is as refined as it is ground breaking. 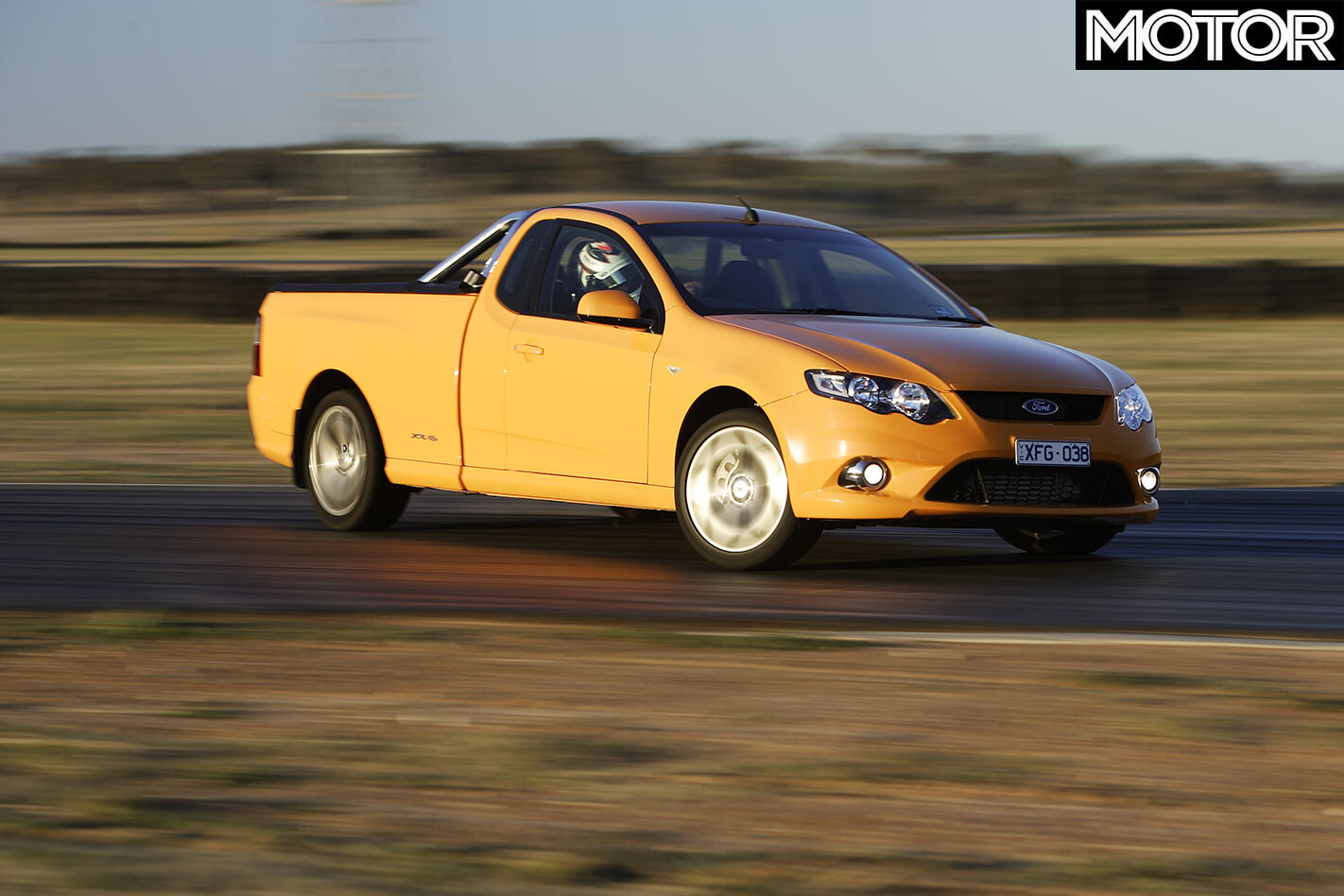 The Barra showed Aussies could build a world-beating six as good as anyone else.

It was FPV engineer Gordon Barfield’s inspired idea to bolt a large turbo to Ford’s all-new DOHC 4.0- litre six, producing 220kW/450Nm on a measly five psi. Later Ford and FPV versions showed the cast-iron block’s true potential, culminating in the Falcon XR6 Sprint that put all the best bits into a 325kW/576Nm swansong that could thump out 370kW and 650Nm on overboost.

Unsurprisingly, tuners have also flocked to the engine, revealing 1000kW as achievable on a stock block. 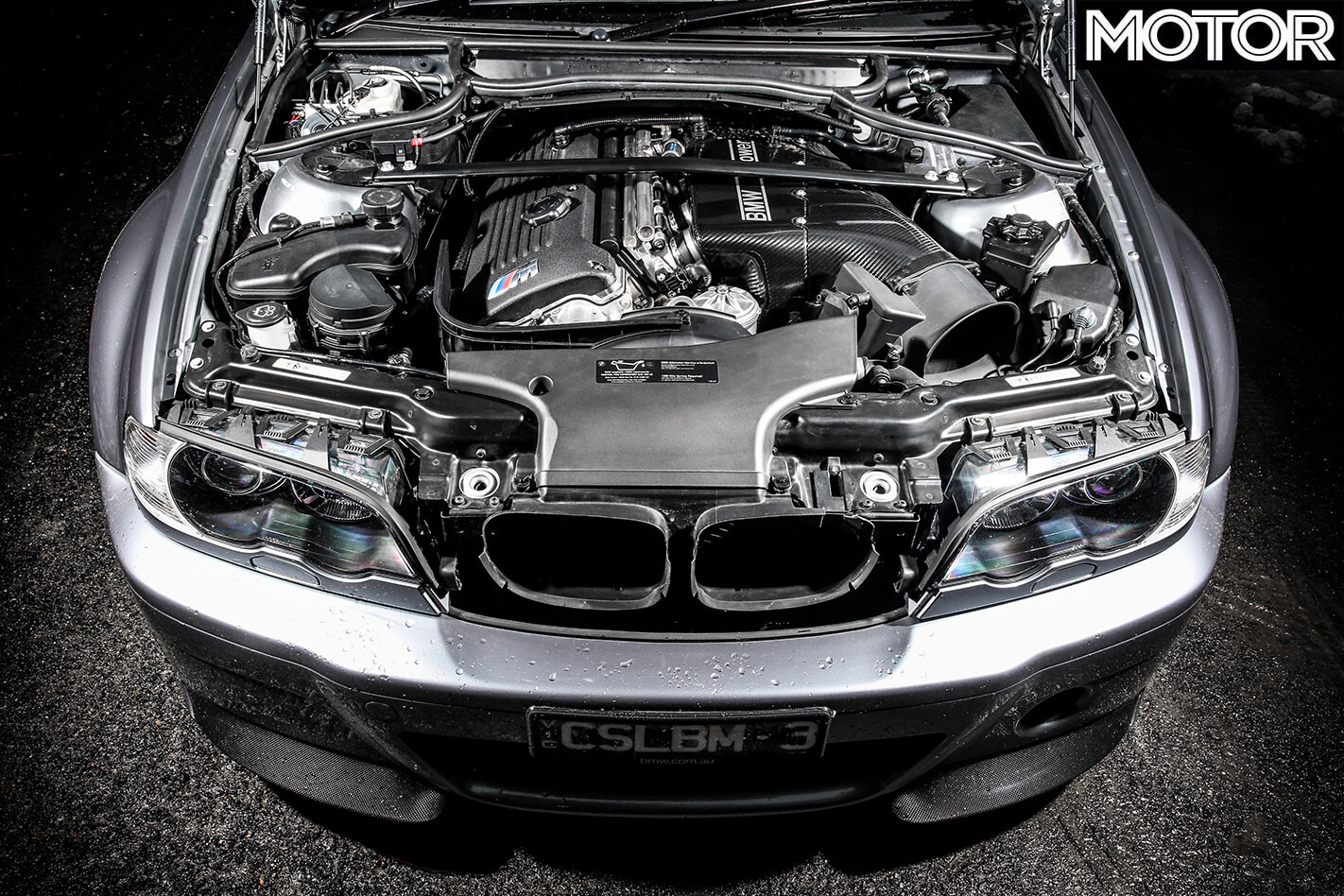 The E28 M5. The M1. BMW has relied on the inline-six to power its most iconic performance heroes for decades and the S54B32 that debuted in the E46 M3 is a particular highlight.

In regular M3s it delivered 252kW/365Nm thanks to its individual throttle bodies and double VANOS, while a reworking of its valvetrain and a new carbon-fibre air intake in the CSL’s HP version unlocked a further 13kW and 5Nm.

Besides the incredible noise emitted when spinning the S54HP to 8100rpm, it also extracted 83kW/115Nm from each of litre of its 3246cc capacity. An achievement that an engine like Ford Mustang’s 5.0-litre Coyote V8 would need 415kW/575Nm to match. 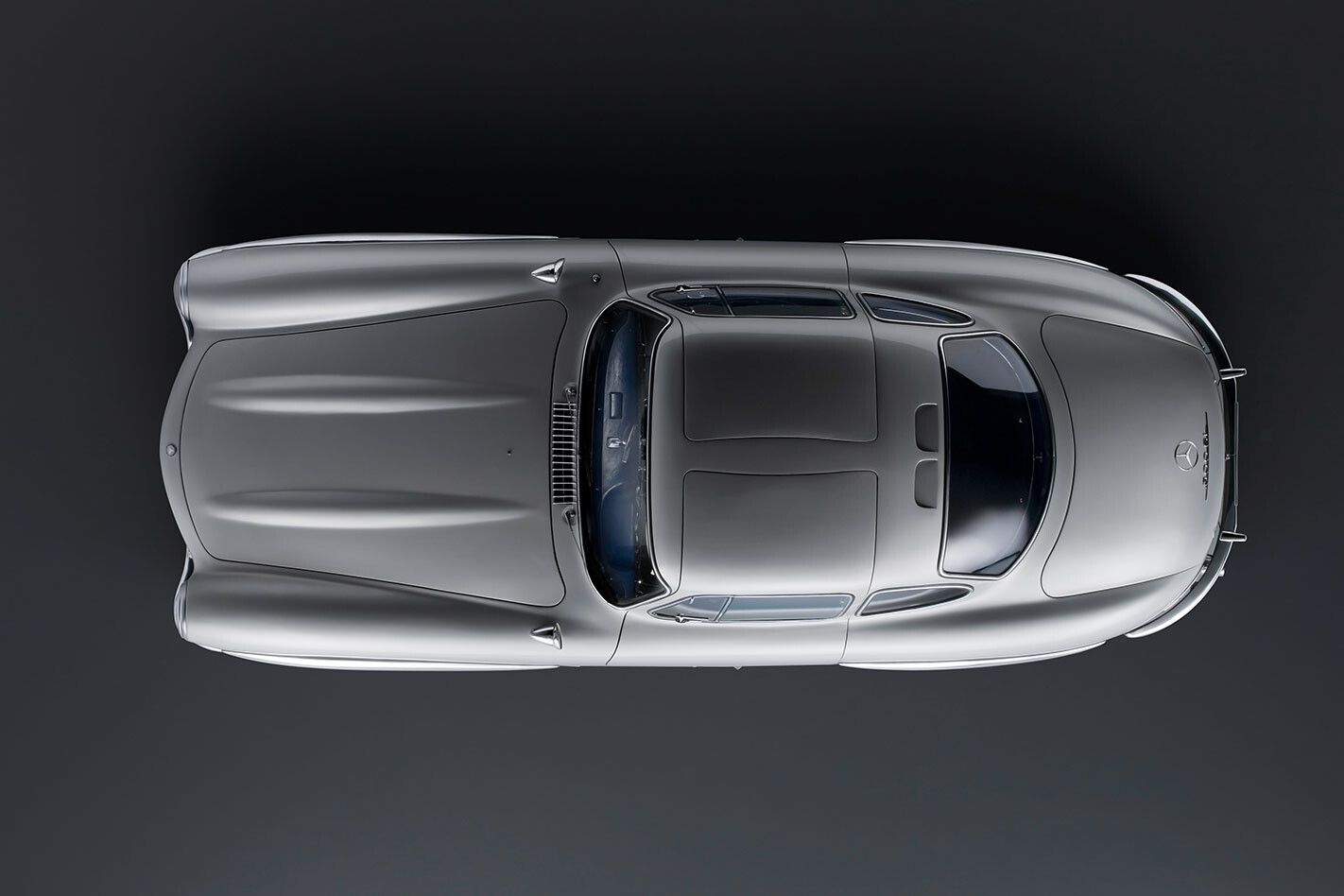 Engines usually find their ultimate form on the racetrack but the roadgoing Mercedes-Benz 300SL bucked that trend when it debuted at the New York International Auto Show in 1954. Its donk was based on the M186 found in the brand’s W186 300 limo, which was then dry sumped for duty in the W194 SL racers.

They produced 125kW, or enough to propel them to first place at the 24 Hour of Le Mans enduro in 1954. In road trim, engineers developed the engine further as the M198 with a Bosch direct mechanical fuel injection system (a production car first), to produce 148kW and 275Nm. To top it off, the block was then upgraded to a far lighter alloy in 1962.

MOREThe greatest straight fours ever made While Nissan’s RB engine had been around for a while, it reached its peak when it was called up for the R32 Skyline GT-R. Debuting the new ‘26DETT’ suffix, it used belt driven dual overhead camshafts, a cast-iron block, individual throttle bodies and twin ceramic turbos to punch out 205kW/355Nm.

While that was plenty for its day, the Japanese gentleman’s agreement on a 206kW limit grew increasingly restrictive as the GT-R evolved into R33 and R34 guises. The engine’s Group A racing record with the R32 hinted at its capability, as do tuner examples, while Nismo showcased its production potential when it bored them to 2.8-litres for the 2004 GT-R Z-Tune. These made 368kW/540Nm.

Aussies first tasted a six with true V8-crushing grunt when Chrysler Oz rolled up its sleeves on the 1972 Charger E49.

While the Aussie overhead-valve Hemi engine was fairly simple, locating exhaust and intake ports on the one side, it proved there was no replacement for displacement. Reworking the 4.3- litre used in the 1971 Charger E38, the E49’s engine sucked air through its triple Webers to put out 225kW/441Nm.

Forget the Holden Torana GT-R XU-1, this Chrysler covered Ford’s fabled GT-HO Phase III’s V8 for kilowatts. Although the E49 did not win Bathurst, it cut the quarter mile in 14.4sec and earned local legend status. Decorated and versatile, the XK6 has powered everything from modern tanks to the gorgeous E-Type. Its legend kicked off with the 3.4-litre crossflow DOHC six that pushed the XK120 to 205km/h and a production car speed record in 1949, before claiming the 24 Hours of Le Mans in 1951 and 1953 in the nose of the C-Type. Toyota’s Aristo might have wielded the 2JZ-GTE first but it will be remembered as an engine that belonged to the Supra.

Strength was key in the 2JZ-GTE’s cleansheet design that, surprisingly, reverted to a cast-iron block. It also used a closed deck, forged crankshaft and a square bore and stroke.

Sequential turbos could push 243kW and 431Nm through its 3.0-litres, enough to propel a delimited Supra to 290km/h, but the engine quickly found its calling in the aftermarket that discovered it could easily reap 745kW with choice modifications. 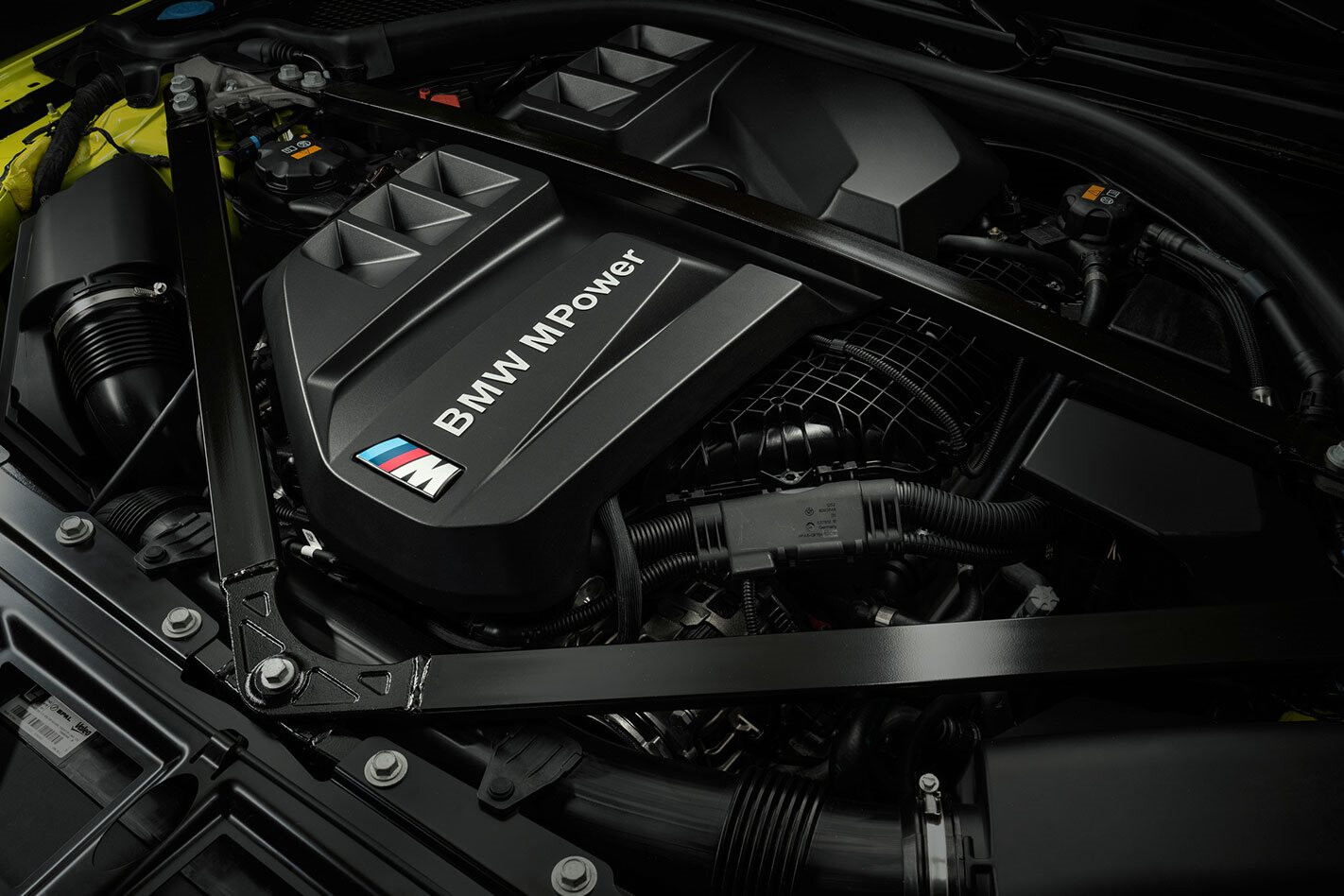 Turbocharging the F80 M3 might have given it serious grunt, but it’s the new M3’s S58 engine that has found manners to go with it.

The engine still spins high to 7200rpm. And not only does its 3D printed cylinder head, forged pistons and a lower compression ratio squeeze a hefty 375kW/650Nm from just 3.0-litres, it’s docile and smoother in delivery – as we’ve found in the X3 M.

A small weight saving also paves the way for duty in the new M4 GT3, replacing the V8 M6. It confirms its closed-deck block and forged crank as sturdy enough to handle serious motorsport.

So with that many advantages in the inline-sixes favour, is the V6 on borrowed time? Not really, because of one simple fact – inline sixes are extremely difficult to package in any car that isn’t longitudinally-engined, where the engine points the same way as the car’s direction of travel. Large transverse-engined vehicles (where the engine is aligned sideways) like the Toyota Kluger require six-cylinder power in a compact package, so for those vehicles a V6 is still the best choice.

But for rear-wheel drive (or all-wheel drive) performance cars and large luxury sedans, it looks like the inline six is very much back in fashion.