With Mark Webber announcing he will be hanging up his helmet at the end of 2016, go back to when we tagged along to his return to Le Mans as a factory Porsche LMP1 driver.

MARK Webber is exhausted. Thin shoulders slumped, his trademark stubble black on gaunt cheeks, the last quadruple stint at Le Mans has taken its toll. But his voice tells the real story.

The famous pit-lane clock says it’s noon on Sunday, 15 June, and with three hours left in the world’s greatest endurance race, Webber’s white Porsche 919 is leading. It’s shaping up to be a fairytale; one of the great wins that would see Porsche – the most successful team in Le Mans history – taste victory in its first year back since 1998. And Webber knows it. Eyes alive, his voice suddenly jumps an octave, a current of excitement making his words come in a rush. “We’re a bit wounded, but we’re doing okay…” He’s beginning to believe.

Not since Brock and Perkins crashed out for Team Australia in 1984 has Le Mans promised so much for Aussie fans. New cars, new rules and an F1 superstar ushered in a new era at the iconic enduro, with a bareknuckle brawl between Porsche, Audi and Toyota spawning one of the bloodiest and most exhilarating races in decades. Pity fairytales almost never come true. Rewind 24 hours and it’s a fresher, more relaxed Webber that fronts Wheels. Meandering through Porsche’s pristine team tent before the race start, Webber jokes over coffee, plays YouTube clips on his phone and, far from snubbing nosey journos, engages them in conversation.

“I’m feeling great, mate,” he says, clear eyes channelling the full force of his personality. “It’s going to be a hell of a race. Make sure you get out the back and see these cars fly. They’re phenomenal.” 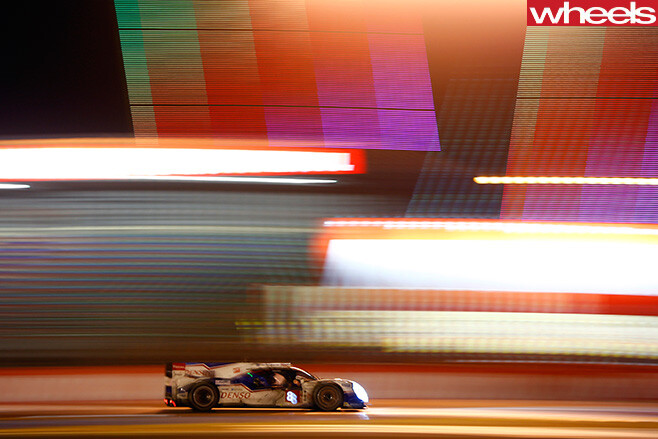 Webber last raced here in 1999 and things went a little… airborne. It’s clear, though, that since leaving Formula One something has changed in him. The caged, cynical F1 warhorse is gone. Australia’s top racer is calm, charismatic, relaxed.

“It’s like the weight of the world has been lifted from his shoulders,” says Webber’s dad, Alan. “The whole family is happy and he’s got some balance back. It was hard there for us at Red Bull.” 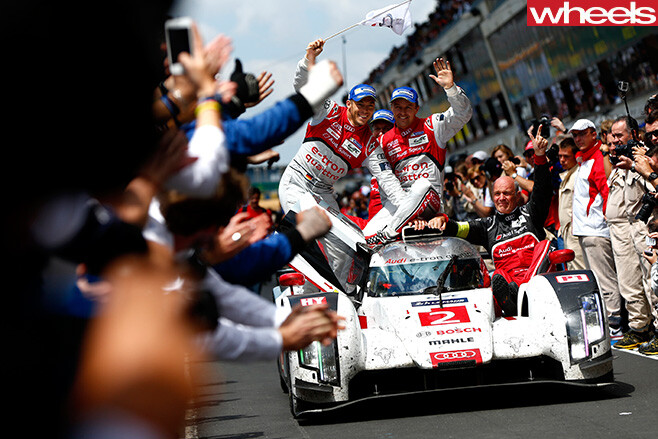 “I certainly didn’t want him to continue in F1,” she says. “I didn’t like the environment. I thought it was toxic and I didn’t want anything to do with it. In the last couple of years I stopped going to races.”

Webber’s struggles at Red Bull, particularly against German teammate Sebastian Vettel and the team’s ruthless talent scout Helmut Marko, are well documented. But Ann says that, despite Mark’s stony public face, the negativity had taken a toll. “His final years in F1 were pretty hard for him in a way because it just wasn’t enjoyable. None of us enjoyed it, none of us wanted to even go. I mean, Mark did; don’t get me wrong, he loved getting in the car and racing it. It was all the other bullshit that goes with F1 that he didn’t have the time for.” 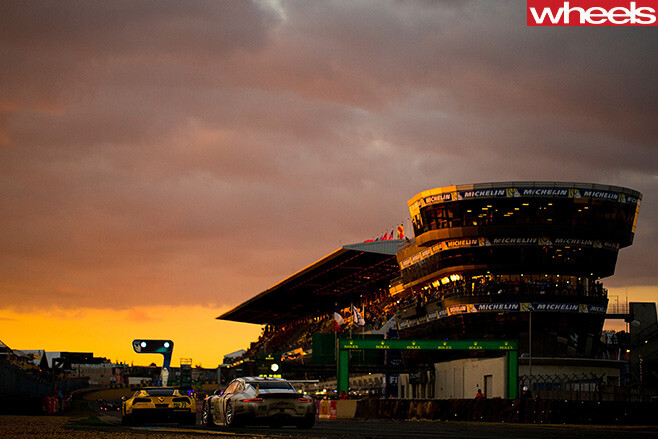 Things couldn’t be more different at Porsche. Returning to Le Mans for the first time since 1998, the marque has a point to prove. It holds the record for the most victories at Le Mans (16) and is keen to bloody the noses of modern juggernauts Audi and Toyota.

Porsche is so determined that it is prepared to race a car it freely admits is the most complex it has ever built. Powered by a 2.0-litre turbo V4 mated to two hybrid systems, Porsche’s 919 produces 557kW, weighs just 870kg and, in five laps of the 13.6km circuit, generates enough energy to power an average household for a day. 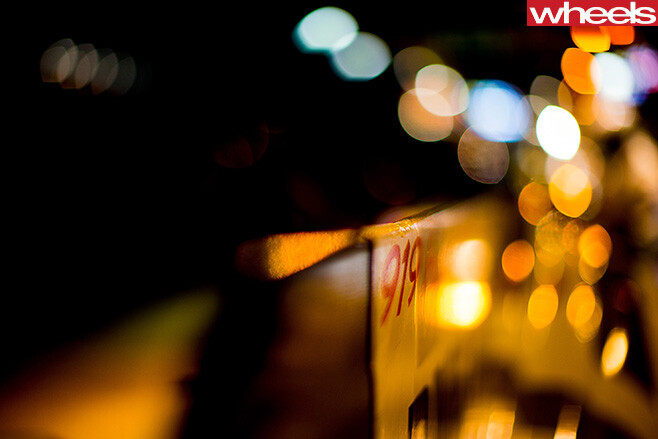 “The lap times are slower than an F1 car, the top speeds are the same, but we’re 250kg heavier,” says Webber. “So I go through the corners slower, but unlike F1, we’re doing the same lap times every lap. That’s where it’s rewarding. And mentally I’ve got to deal with a lot more.”

The 919 is a world apart from those cars raced by Toyota and Audi. The Japanese car runs an atmo 3.7-litre V8 mated to a supercapacitor-fed electric motor to produce 741kW, while the Audi is different again, using a heavy 4.0-litre diesel boosted by a single, small electric motor for a combined output of 520kW.

New rules for 2014 place a heavy emphasis on hybrid tech, allowing for these widely different philosophies. The result, as we witness this year, is great racing. Unlike F1 or V8 Supercars, you don’t feel or hear an LMP1 car approaching. Instead, you see it, white lights cutting through the dark French countryside, brake discs glowing orange as it washes off speed. It’s only on corner exit that the engine begins to sing, though Audi’s diesel is so quiet you can actually hear the whoosh of air rushing over its body and tyres straining for grip across saw-tooth kerbs.

But don’t think this lack of noise means a lack of speed. Set on the sandy, patchwork plains of western France, 200km west of Paris, Le Mans is a speed Mecca. LMP1 cars reach 340km/h on the famous Mulsanne Straight. Through the corners they’re brutal, rounding up GT cars like startled sheep at a dog show. The closing speeds between the different classes is frightening; the front-runners start lapping the rear of the field after just five laps. Imagine F1 cars racing at Bathurst against V8 Supercars on a track three times as long and you can start to understand the spectacle. The edges of the circuit are littered in a colourful, classless cluster of tents where Ferraris, Mercs and Jags split soggy pieces of turf with beaten up Ford Fiestas. Rich and poor alike share barbeques and beers by the carton, but it’s a crowd that has none of the tribal animalism so common in Australia.

And it was here, after hiking through lush fields to stand on a bank at the famous Arnage corner at sunset, gravel crunching underfoot and the ripe smell of camp toilets burning my nose, that I first saw that things were going wrong for Webber’s #20 Porsche. Webber’s car, which he is sharing with Brendon Hartley, a hairy youth from New Zealand, and German ace Timo Bernhard, was suddenly slow to turn in, and struggling for traction on corner exit. His pace was five seconds slower than the leaders. A front roll bar had snapped just seven hours in. Webber and co were about to experience first-hand the gruelling toll Le Mans takes on both machine and driver.

To save time, Porsche decided to start clocking quadruple stints. The drivers would spend close to four hours in the car, 760km without a break. That’s two and half F1 races, in pitch blackness, with only a brief respite every 14 laps to refuel. “Driving at night is one of the hardest aspects of Le Mans,” admits Webber. “I got a couple of hours of sleep, but I was pretty busted a while ago.”

As taxing as it was, the four-shift tactic worked. In a classic case of tortoise beating hare, the Porsche took the lead 14 gruelling hours later. Electrical failure scuppered Toyota’s chances at midnight, meaning only the two remaining Audis could spoil Porsche’s fairytale.

The first sign of trouble was an unscheduled stop to change a puncture. Webber, barely recovered from that last quadruple stint, was thrown back in to get it home. Then the #20 Porsche imploded. “It looks like the engine has got a bit tired in the end,” Webber laments after the race, beer in hand. “There was a noise in the engine, so we had to stop. “Audi and Toyota, gee they knocked seven bells out of each other early on. The pace was very quick and they actually knocked each other out, they really did. I pretty much predicted it actually; I thought we’d sit back and watch a little bit of it, and we did and then they actually boxed a bit too much and we were leading, which was awesome. It was awesome.”

The failure effectively gifted another win to Audi, its 13th success at the world’s toughest circuit endurance race. But the predictability of the result belies the titanic struggle of the previous 24 hours. With new cars and therefore little data to fall back on, the 2014 race was a brutal dogfight of human and mechanical endurance, with each manufacturer literally speeding into the unknown.

It was an old-school Le Mans that saw every team hit trouble. Audi handled it the best. As for Mark Webber, as relaxed as he is at Porsche, don’t for a second think he’s lost his will to win. Facing a gaggle of Australian journalists as the rest of the field howls towards the finish behind him, Webber’s post-race interview lasts precisely 3m32s before he snaps at an ill-worded question.

“Three times here now,” says the journalist. “Are you starting to think this place is a bit of a bugger to…”

“Very typical Aussie question that, mate,” Webber attacks, spitting the last word with venom, a hard finger stabbing the air. “You’re asking if it’s a hoodoo circuit? Rubbish! We had a f--king good day out there today. There’s no embarrassment; we’re proud. We made our presence felt, but you’ve got to graft, mate, you’ve got to graft.

“This place is five and a half Bathursts in one go and of course I want to win it outright. That’s what I’ll do in the next few years. It’ll just take hard work and discipline to get there.”