DARE to be different is a motto that many of us seem too afraid to live by. Not Chris Hollingworth. While most of us follow trends, Chris is a trendsetter. After all, who would have believed that you could bolt two turbos under the boot of an American muscle car and make it work?

“I always like to have cars that are different,” the laconic Queenslander says. 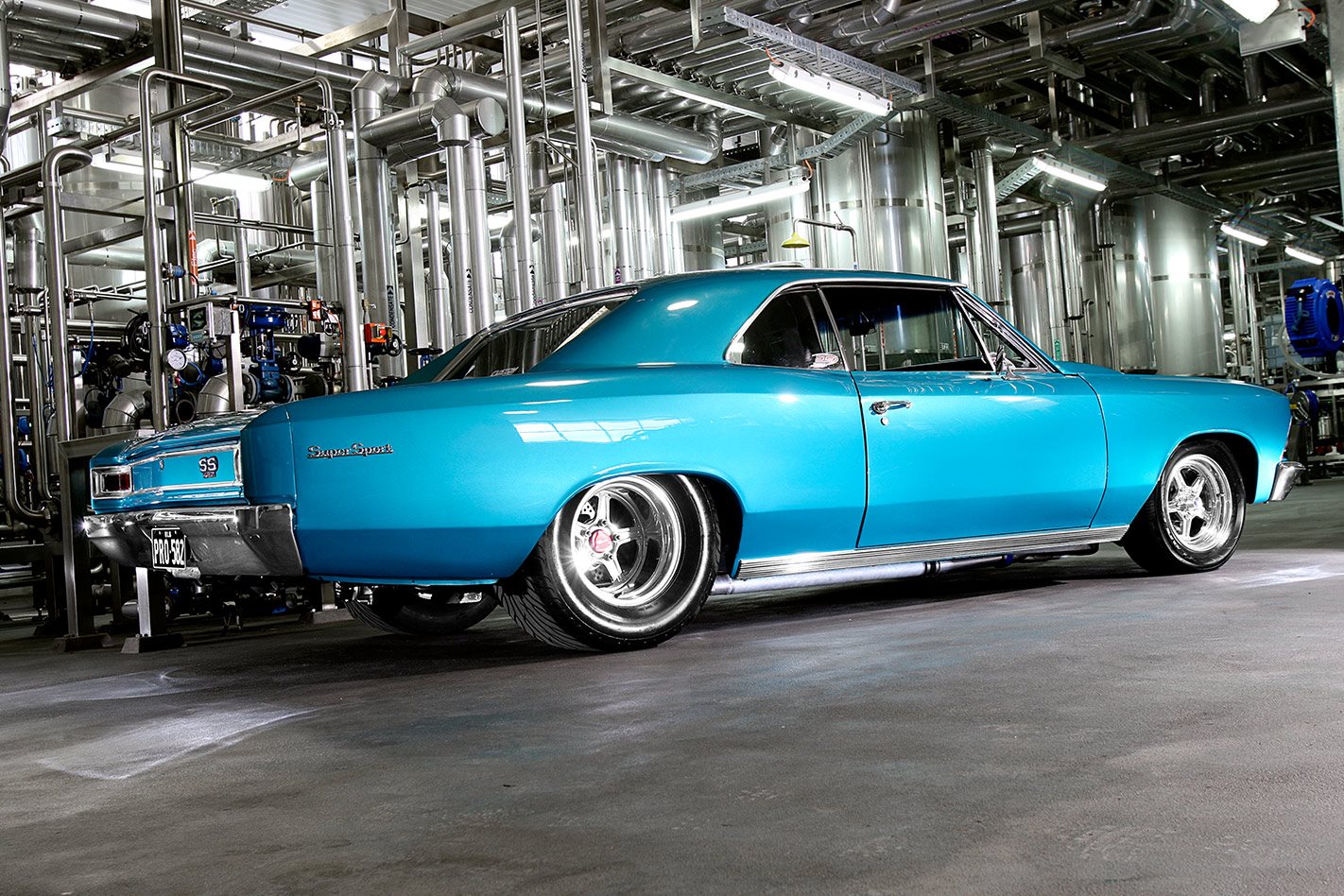 Let’s face it, ’66 Chevelles aren’t exactly falling out of trees here, which is what attracted him to this Pro Streeter in the first place.

“I bought it off a guy I know in Melbourne. John got it over here, then realised it was going to be a lot of work to make it a registered car so I offered him a deal. It took him a while to come around.”

As cool rides go, the Chevelle was positively frosty. Packing 21in-wide rubber under the rear and a 498ci big-block up front, it was the epitome of late 90s Pro Streeter style. But not exactly street legal.

“I really wanted it to look more like a street car, so I put a longer diff in it, retractable seatbelts, and took the intrusion bars out.” 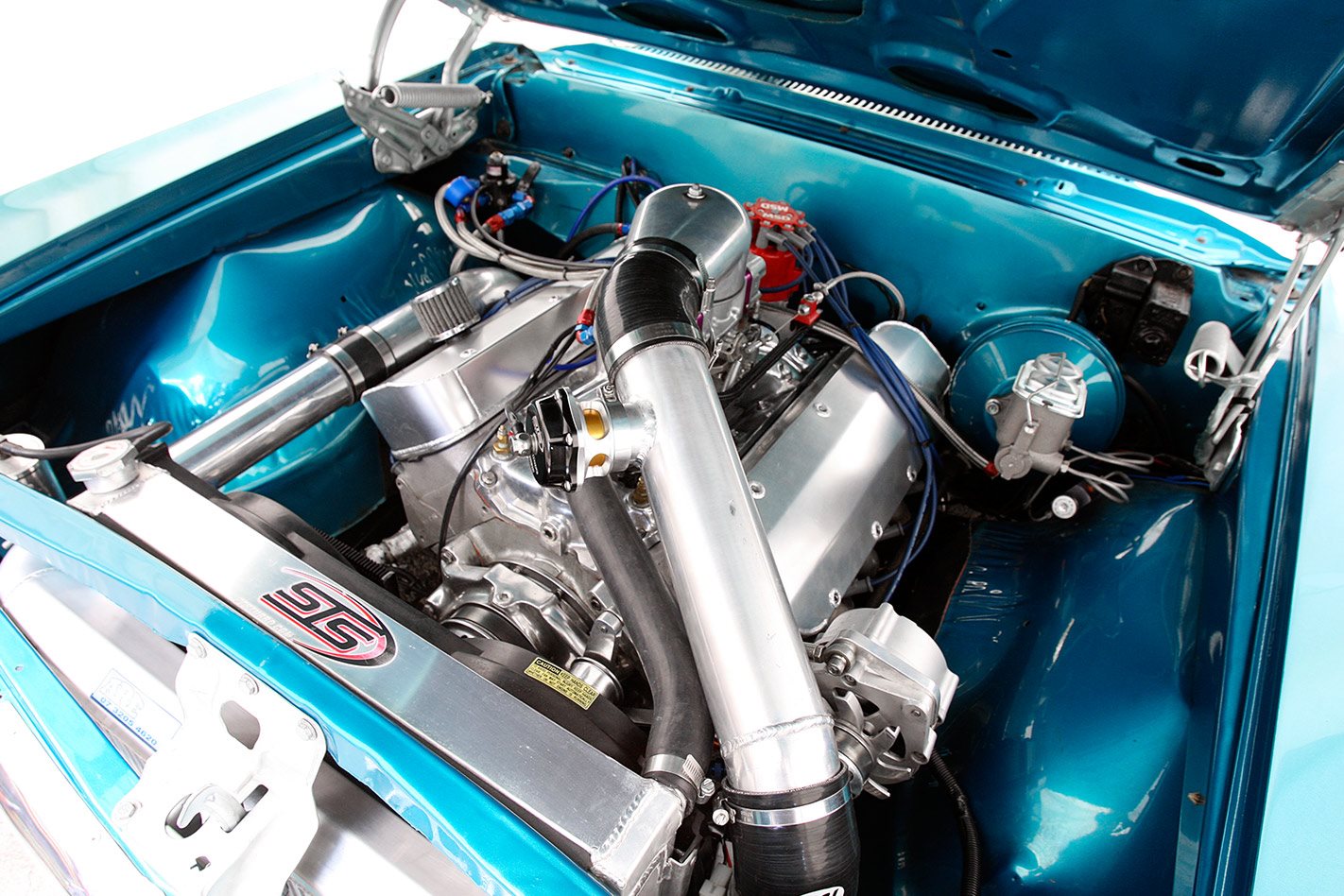 He also flicked the 15in-wide Convo Pros for 10in Billet Specialties rims wrapped in 15in Mickey Thompsons. Almost subtle by comparison.

“It’s very driveable now,” he says. “I can jump in it any time and go for a roar around the area.”

For most of us 420hp at the treads would be plenty but a man with a seven-second Commodore is used to a lot more and Chris reasoned that a couple of turbos would be the perfect pick-me-up. As we said before, though, he does things a little differently so instead of squeezing the two 700hp turbos up front, he hid them under the back end. 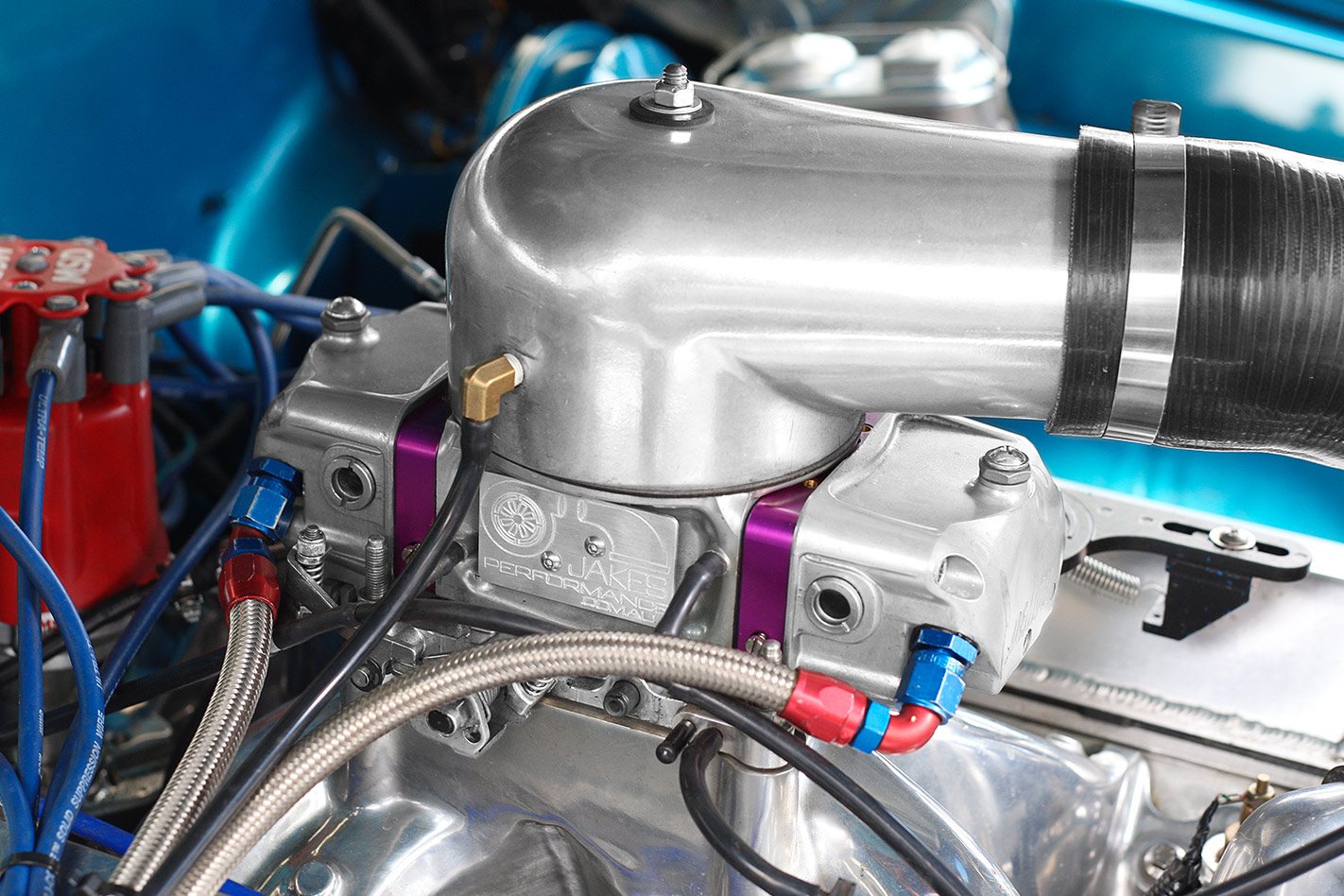 Chris had Jake’s Performance trick up an 850 Demon for blow-through work and he’s mighty happy with how it goes. “That system was designed for 2000hp but we’re lucky to see 1000hp so it’s probably overkill,” he laughs

Okay, the idea isn’t totally new. STS (Squires Turbo Systems) has been doing rear-mounted turbos for a few years, as Chris discovered after buying a Chevy Silverado pick-up while in the States with Victor Bray.

“I realised it needed more power so I looked up what you could get and these rear-mount STS turbos come up. I bought one and it was brilliant from day dot.”

Knowing they’d work, he rang STS for a pair of suitable turbos for the Chevelle — we covered how it all went together in the Sept ’11 issue. 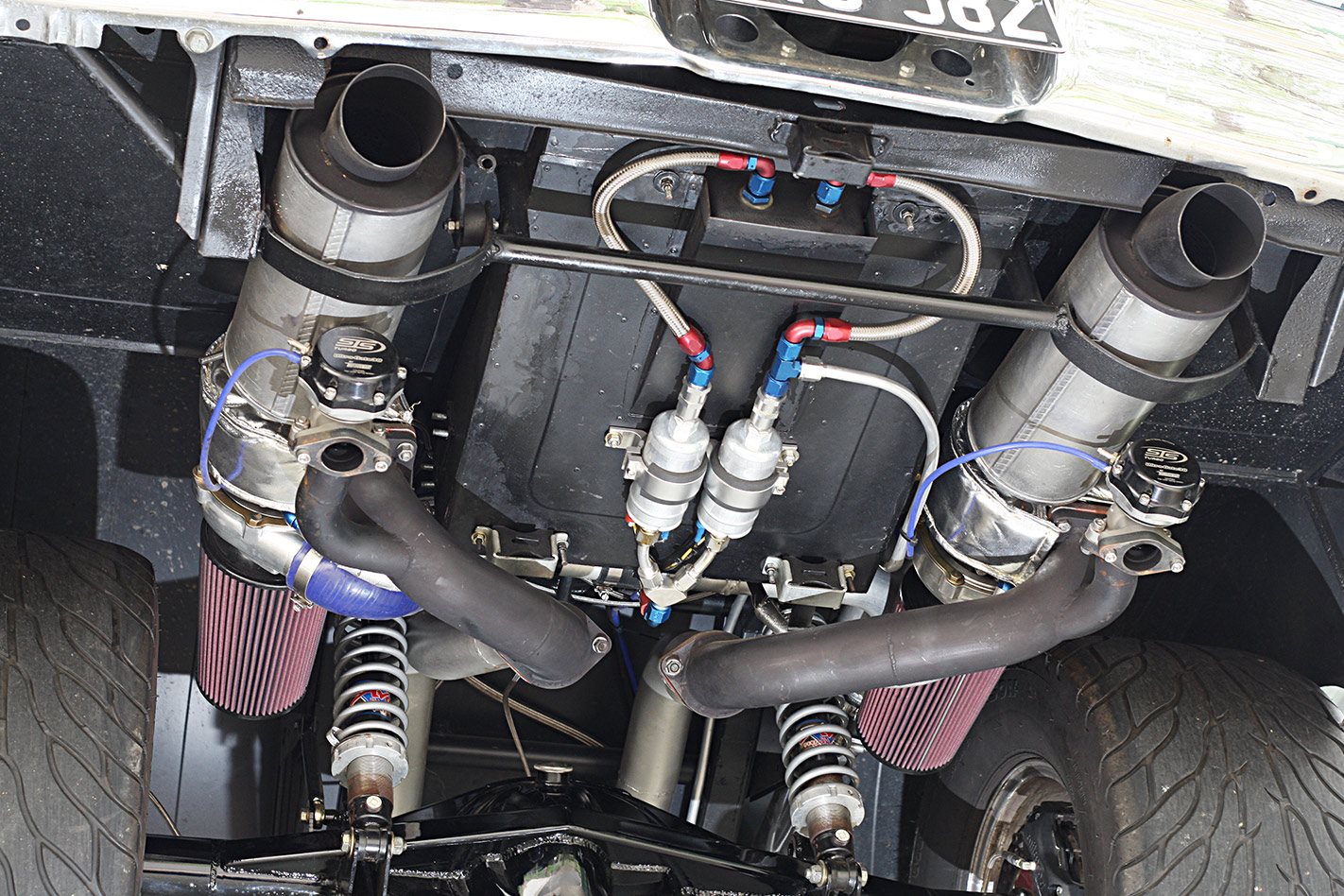 The turbos hide under the boot. Read about the install here

To save you looking back, at just 6psi the Chevelle was pumping 680 horses to the rear bags; with 10lb it hit 830rwhp — on pump fuel. The kit is good for 1400 flywheel ponies but Chris says there’s no point; even at 10psi it’s an animal.

“At the All American Day at Lakeside I dropped six degrees out of the timing and put a jet front and rear to slow it down a bit. I probably pulled it back to 600rwhp and it was just eating everything out there but you could drive it. If we went to a dyno day and I wanted to be a hero, I could swap in the 10lb springs and throw 830hp at it but you can’t drive it; it’s off or on. If you put any more power in it, it just wants to keep smoking the tyres in top gear.”

While the stroked big-block was fresh when Chris got the car, he tweaked it to be more boost-friendly. But after two different roller cams let go, he went right through the engine to come up with a reliable package. 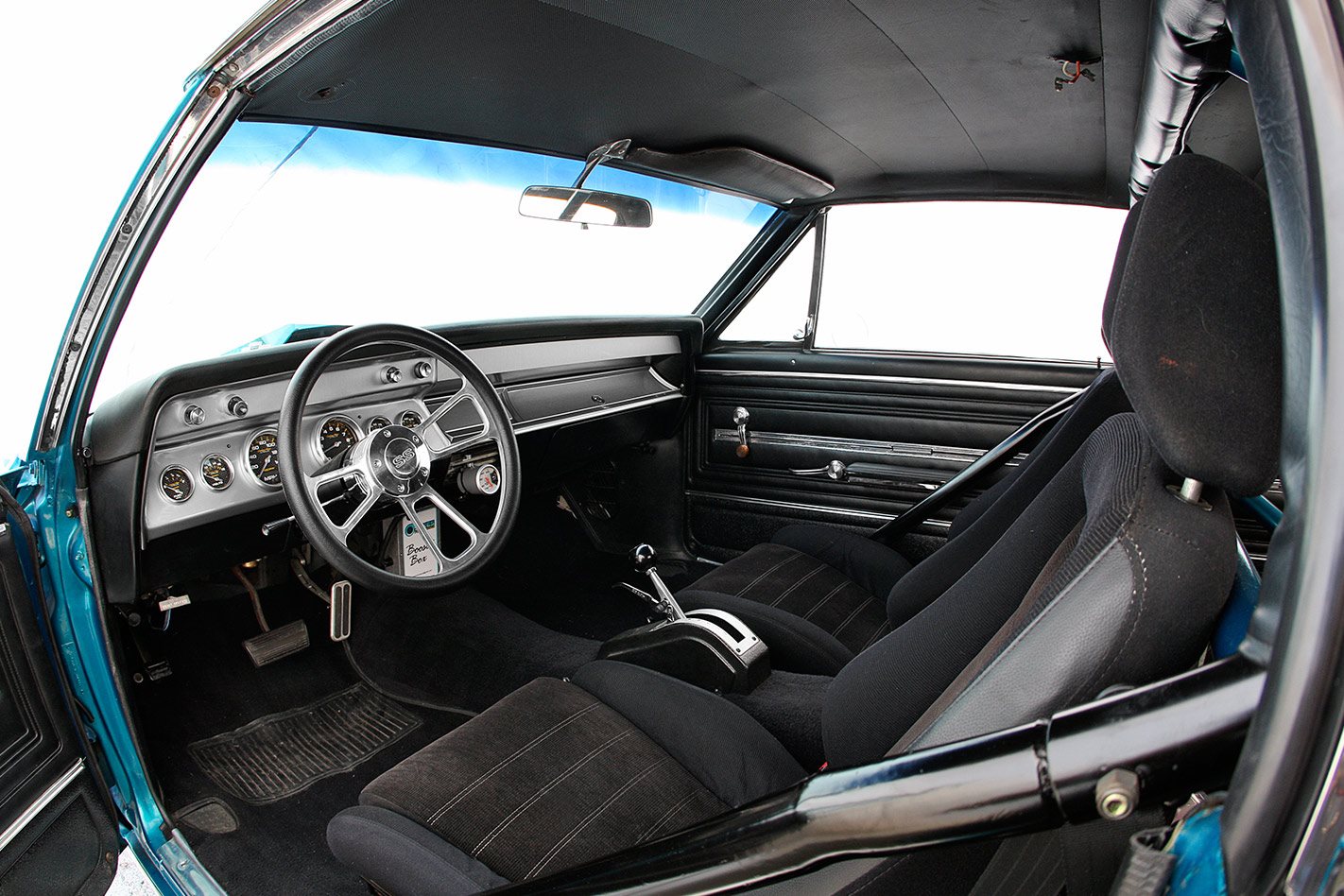 Inside is pretty much how Chris got the car; he just deleted the intrusion bars and a made a couple other changes to improve streetability

Using a 454 four-bolt block, he’s got an Eagle crank with H-beam rods and SRS pistons to do the reciprocating duties. A Surecam solid roller handles the lift and duration now and there have been no problems since it went in. The heads are Proline RHS 320s. Chris flirted with some big-port Dart 360s off his race engine but found they made no more power on this combo.

The rest of the driveline is bulletproof, as it needs to be. Custom Transmissions knocked up a full-manual Turbo 400 using TCI gear, while the extended nine-inch diff is full of parts from Race Products. With 3.55 gears at the back and 29in-tall tyres, the big Chevelle is a pussy cat on the freeway.

“It cruises on the highway at 2800rpm or so — it’s nice,” Chris says. “Everything works. My 15-year-old daughter and I jumped in it and took it down to Cooly Rocks so it’s definitely a car you can drive anywhere and do anything with it.” 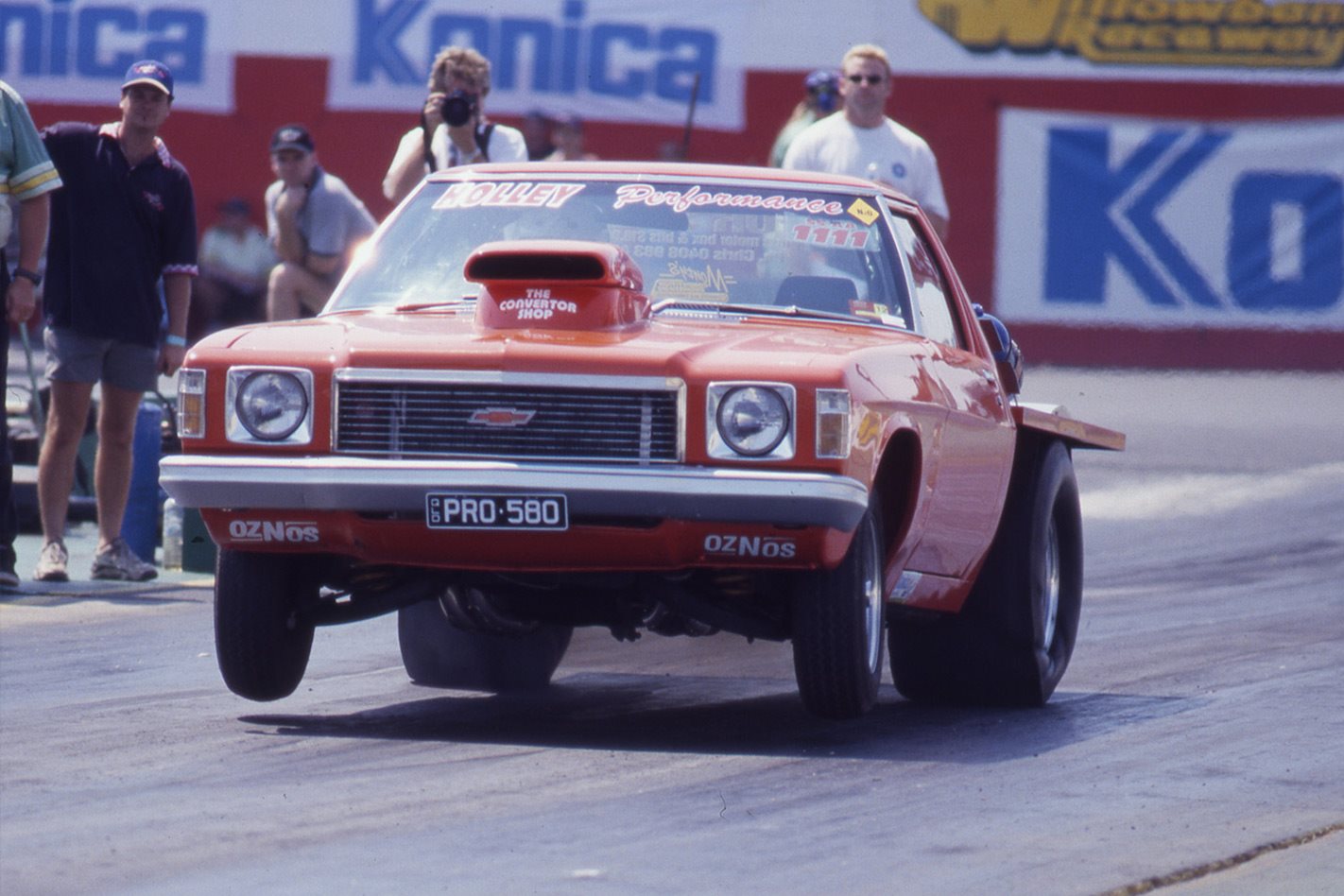 Chris has had some tough rides in his shed, including his Pro Street tonner (above), outlaw VR ute (SM, Jan ’03), and his HG ute (SM, Oct/Nov ’88, pictured below) 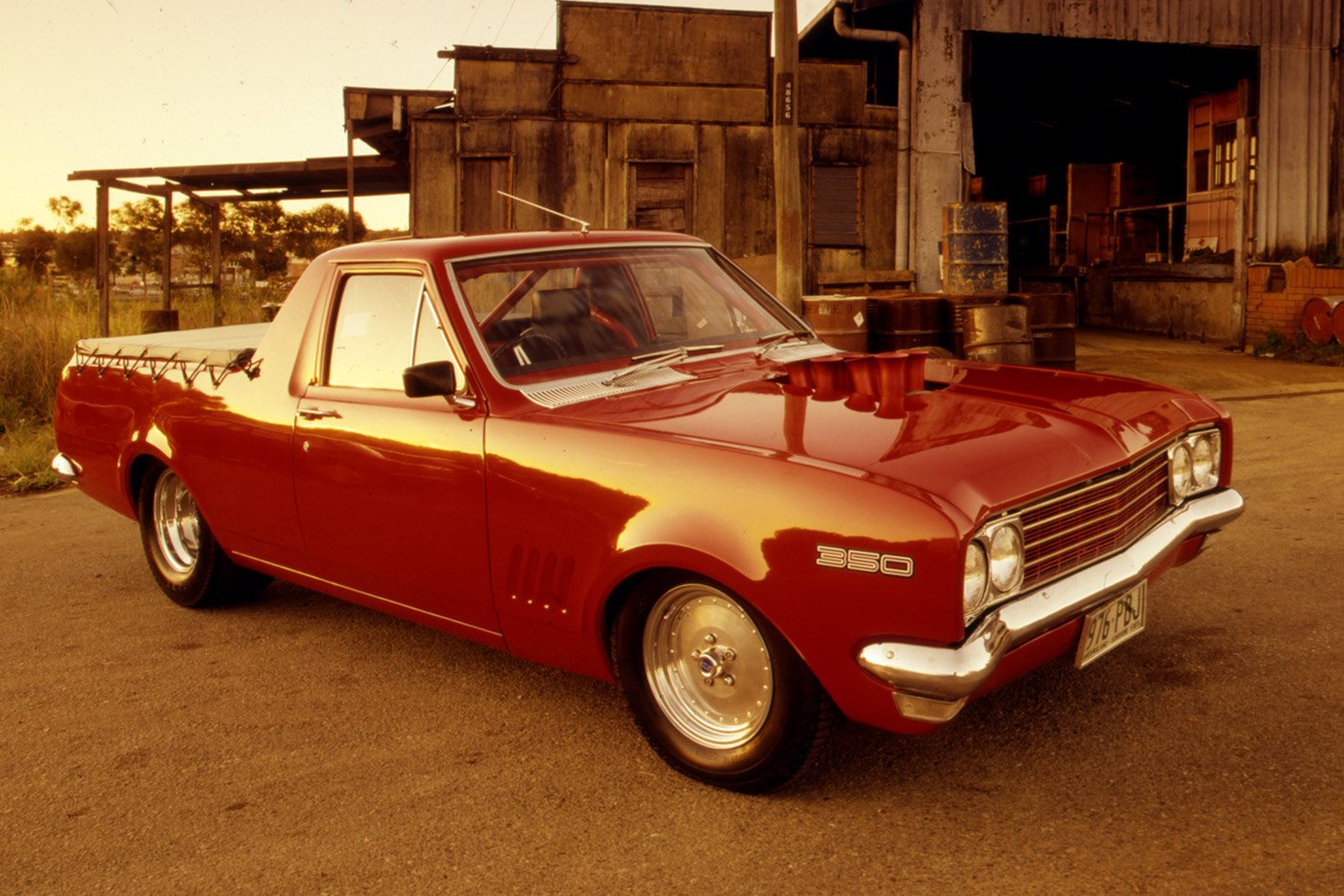 He hasn’t had much chance to drive the big girl lately, however. “It’s been parked while I finish building a turbocharged 427-cube C10. All my efforts have been directed at that at the moment.”

Does that mean the Chevelle will be moving on?

“Yeah, I’d sell it if someone gave me the right money. Otherwise it’ll sit it in my shed next to my ’57 convertible and my C10.”