Performance Car of the Year 2018: Behind the scenes

Robbo’s far from a celebrity, but he’d definitely like to get out of here – this is his tale

SO, Here we are again. The unenviable task of assessing the best performance cars on sale in 2017. (Or 2018. I can’t quite keep up with the marketing types...)

It does mean, however, that largely the same group of reprobates as last year – with one notable exception, which you’ll read about in just a minute – all saddle up again for a gallop through the wilds of Victoria. 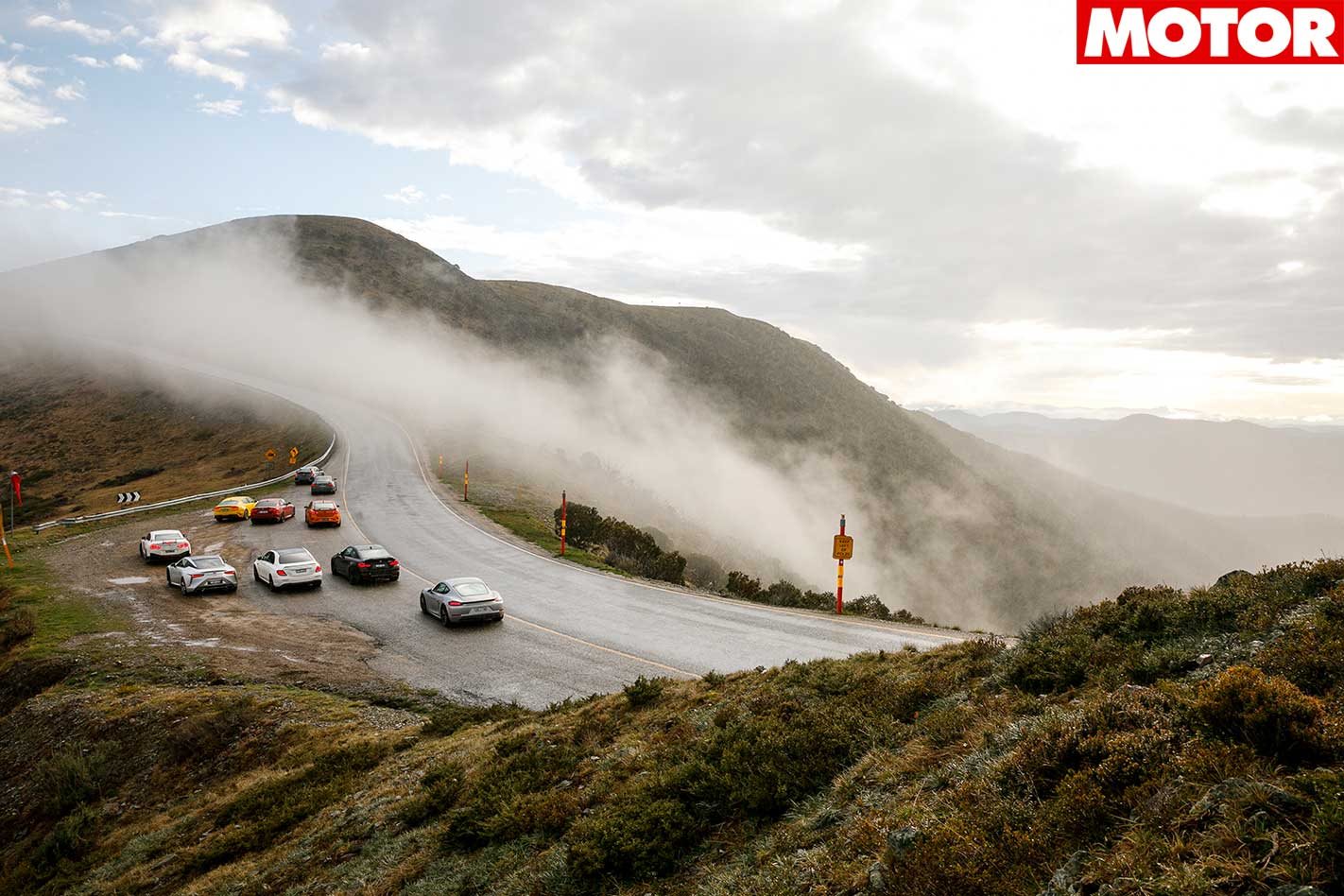 Started in 1918 by the late Viscount of Lower Oatley – it’s suggested that Paul Cockburn is a direct line relative of the founder but we can’t be sure (love ya, Paul!) – PCOTY has seen more than 140,000 cars go through the rigorous rigmarole of navel gazing, sausage-roll scarfing and “Oi! How many cylinders does this Porsche have again?” over the course of the past 100 years. 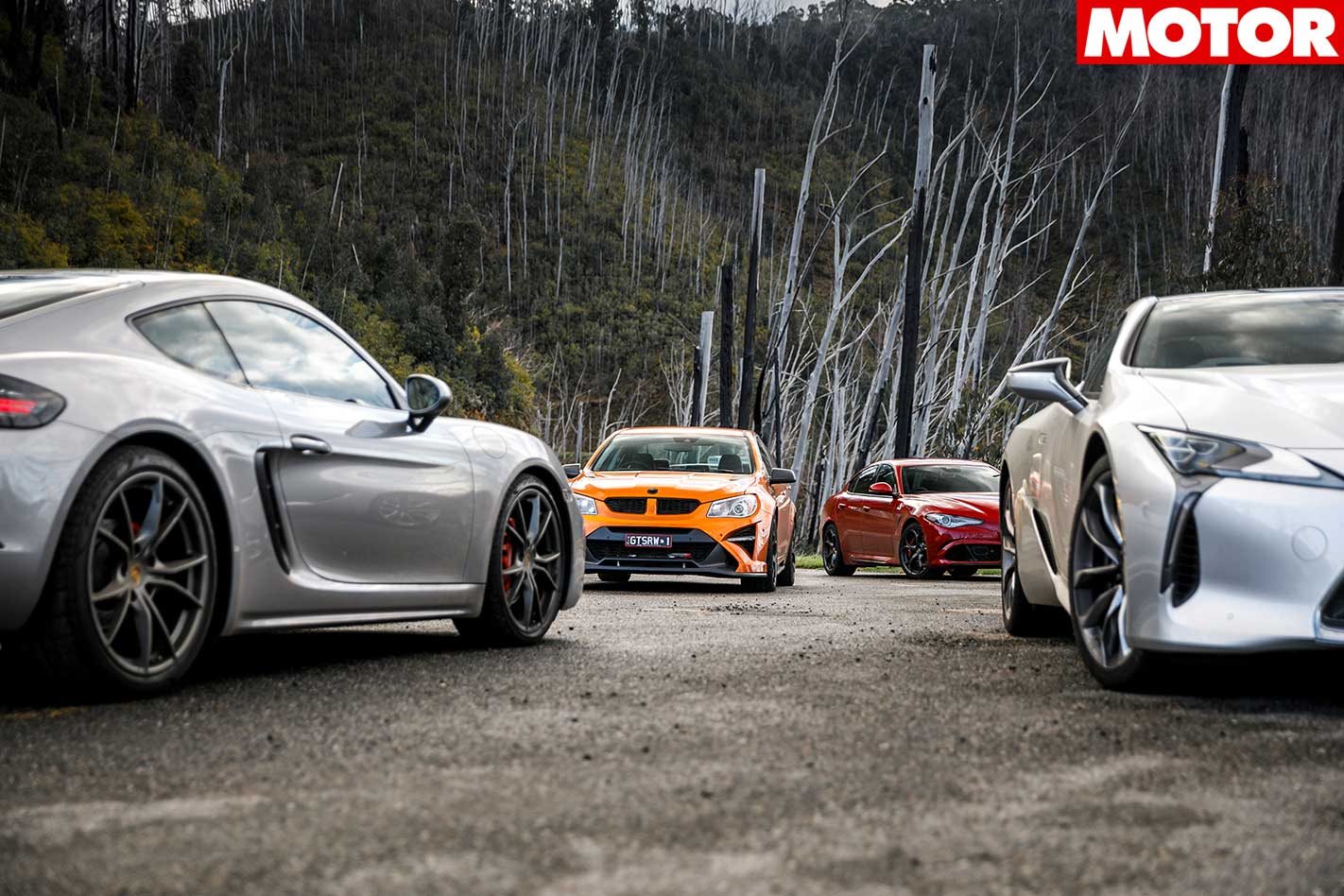 What... those stats are right, yeah? As usual, the in-office crew has assembled a force of nature not seen since... ooooh, well, last time we did a big event.

Despite his boyish good looks (Jesus… being a freelancer is a tough earn, I’ll tell you), this is Editor Campbell’s fourth PCOTY rodeo. Or is it the fifth? 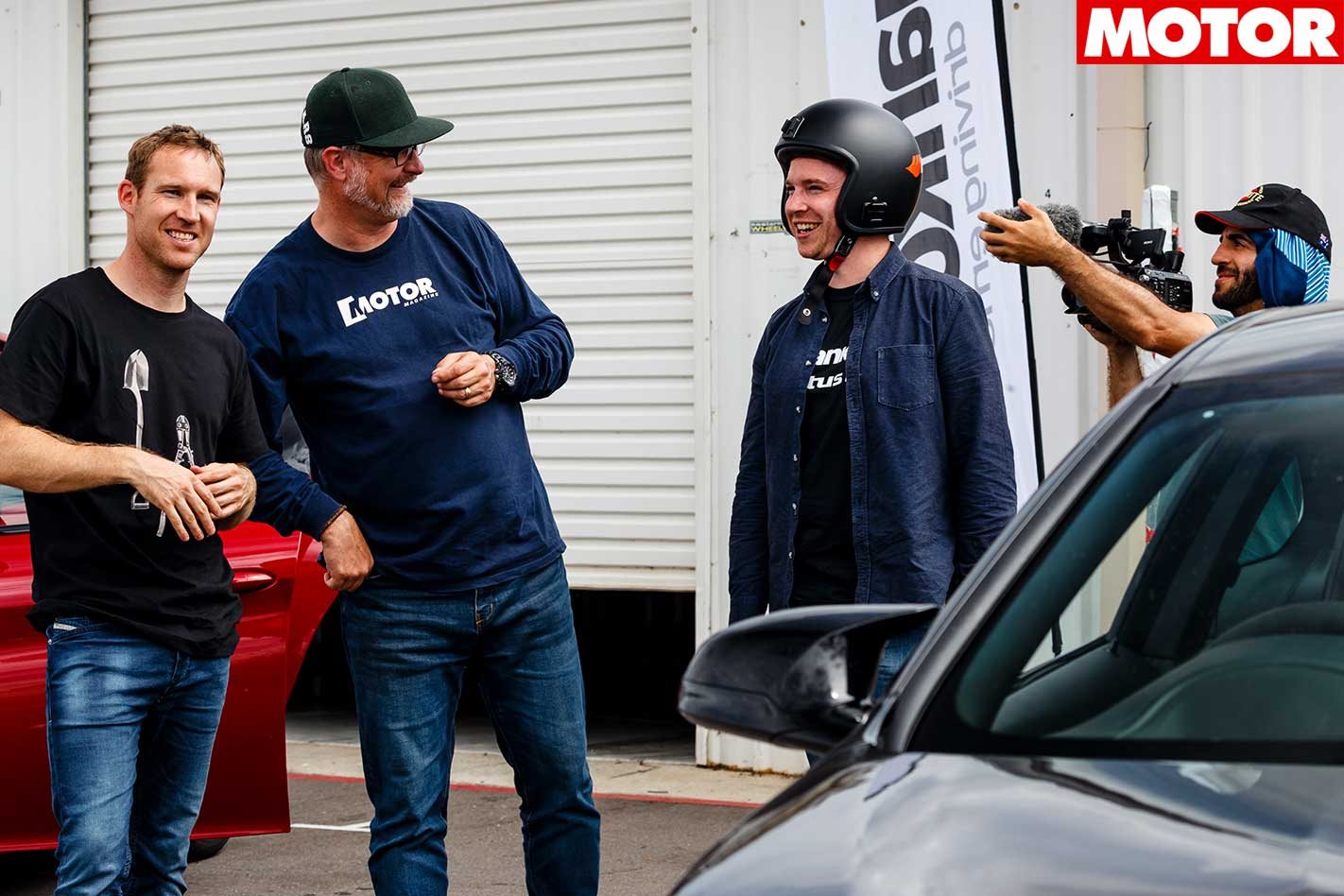 Above: Despite being subjected to even higher levels of ridicule this year, DC steadfastly refuses to buy a half-decent helmet

Damn my senility... and he’s ably backed up as always by the sultan of spanking stuff – cars included – Scott Newman and young office punks/InstaBookTweet guys Louis, Trent and Chris. The baton of age and, well, age is once again grasped in feeble, hairy-knuckled fingers by Morley and I.

“Is it just me, or can you not understand half of what these kids say?” Morley muses over breakfast one morning. Hashtag, bro – smh. 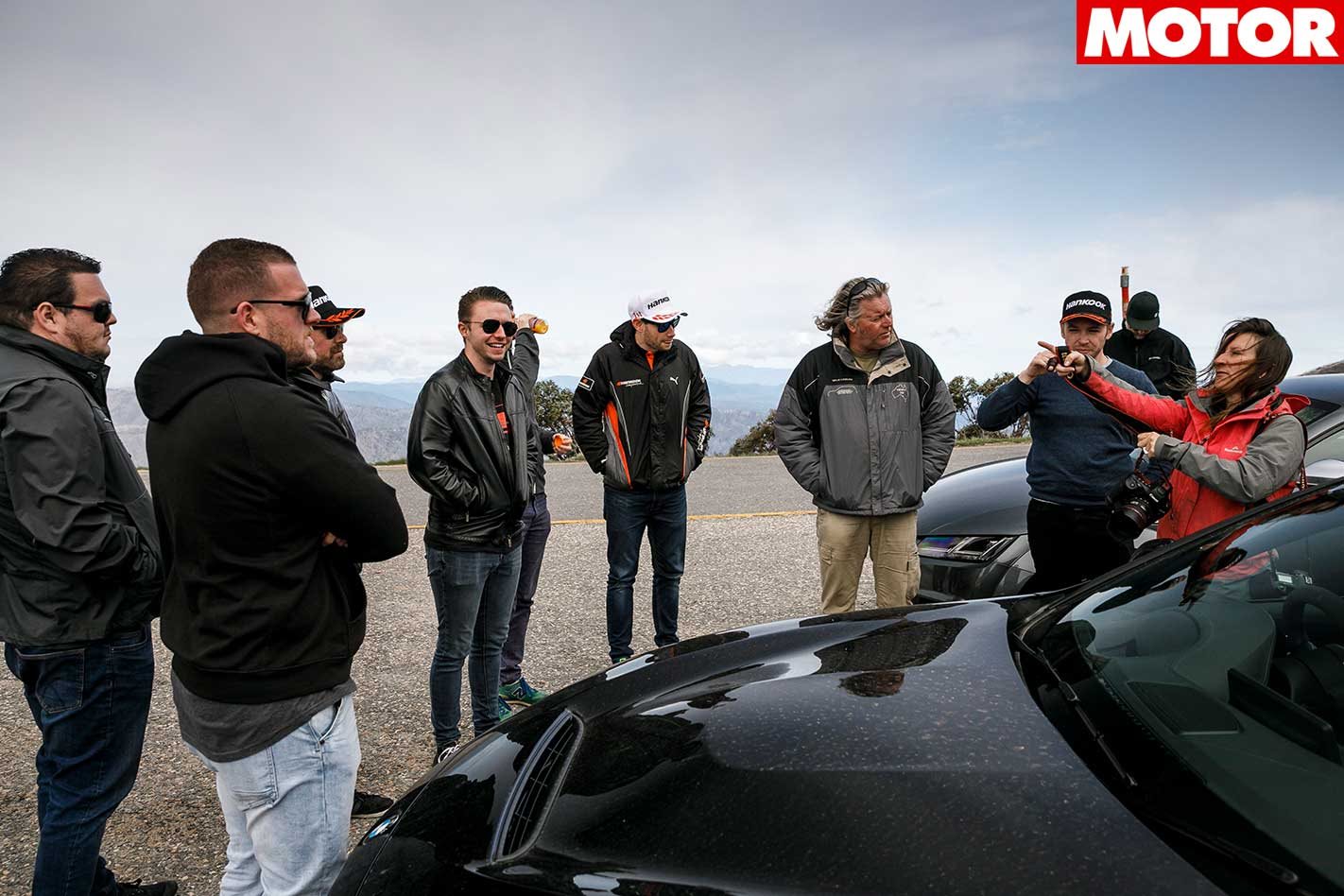 Add in a bonfire of creativity from both a video team and a photo crew, and there’s just one person left to introduce – and that’s the microphone-throwing, AFL-agnostic, Bathurst 1000-winning lunatic, David Reynolds, who’s been drafted in for our erstwhile designated driver, Warren Luff, in lieu of Luffy being a bit too close to HSV and the W1 for comfort.

One of Wazza’s trademarks over the past 15 years has been his absolute rigour and unshakeable professionalism when it comes to testing cars, no matter where they came from. Anyway, it is what it is, I don’t get paid to make the hard calls, and hopefully Wazza’s trademark perfect hair will be present and correct next year. 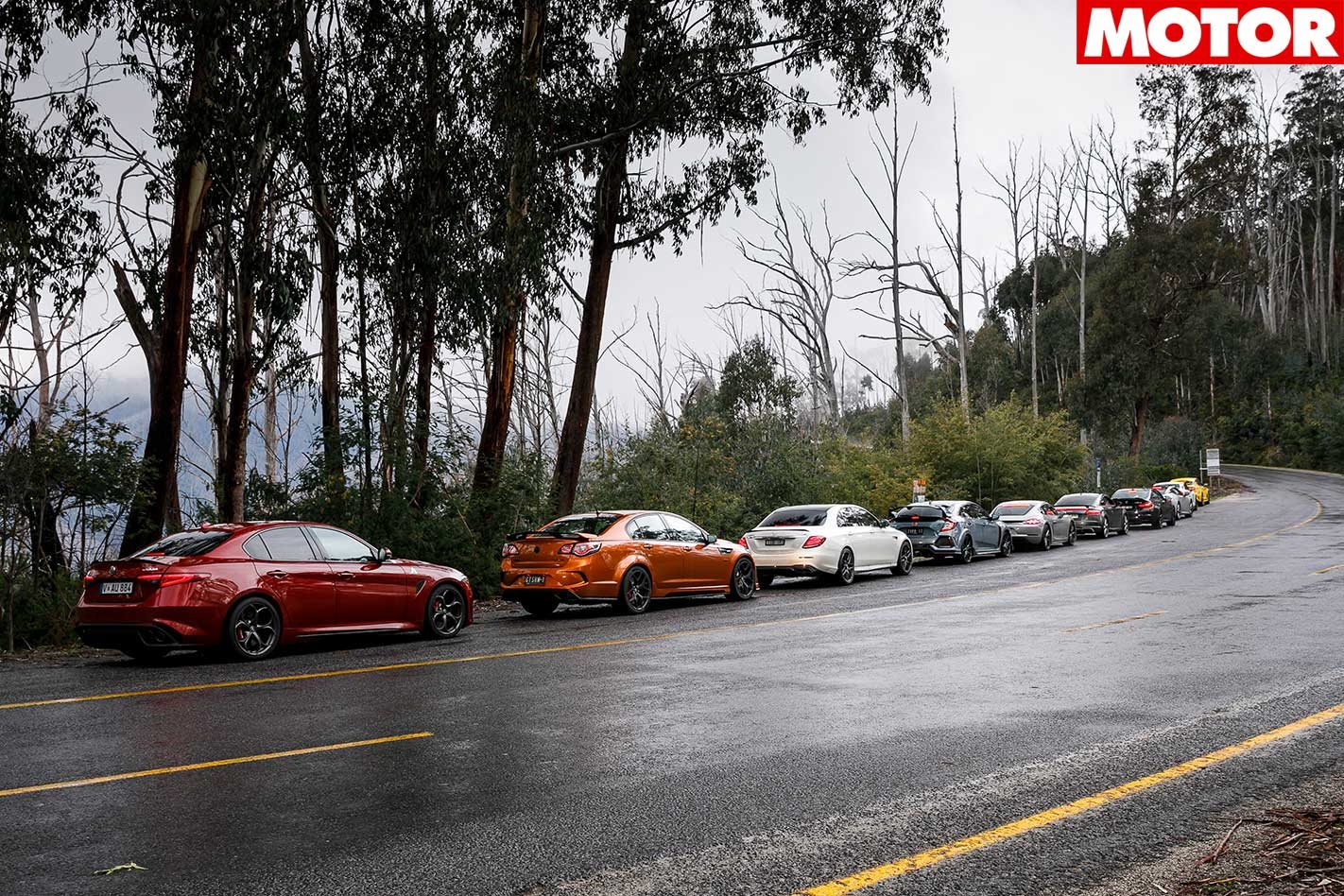 In Winton. Morley and Newman (not the name of a law firm) arrive a tad late at the airport to fetch me, but their choice of wheels can’t be faulted – the last of the Clayton Mohicans, a metallic tangerine HSV GTSR W1. It’s been pulled back from other, less strenuous duties to give us at least one more chance to be able to say ‘Country – Australia’ on our spec sheets. 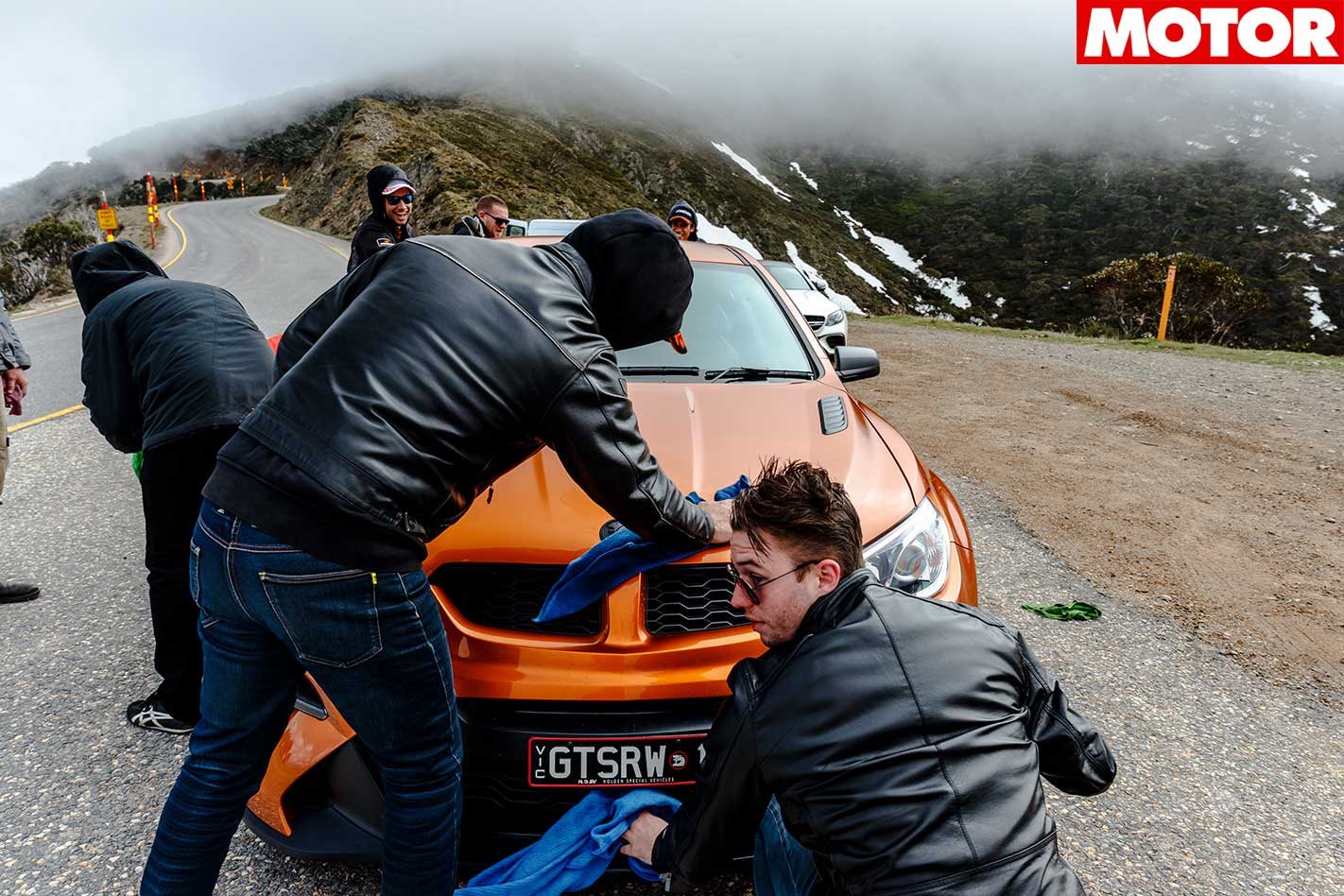 Above: Not since Scarlett Johansson needed a bath have so many blokes so keen to offer their cleaning services

Task one is its raison d’etre, too – a cross-country lope from Melbourne to Benalla, three-up with their gear aboard.

In truth, I’m not particularly sentimental about the whole end of the road for Holden. In fact, I’ve only ever owned one, a yellow-and-rust UC Sunbird that I swapped a mountain bike for – it was the better deal. 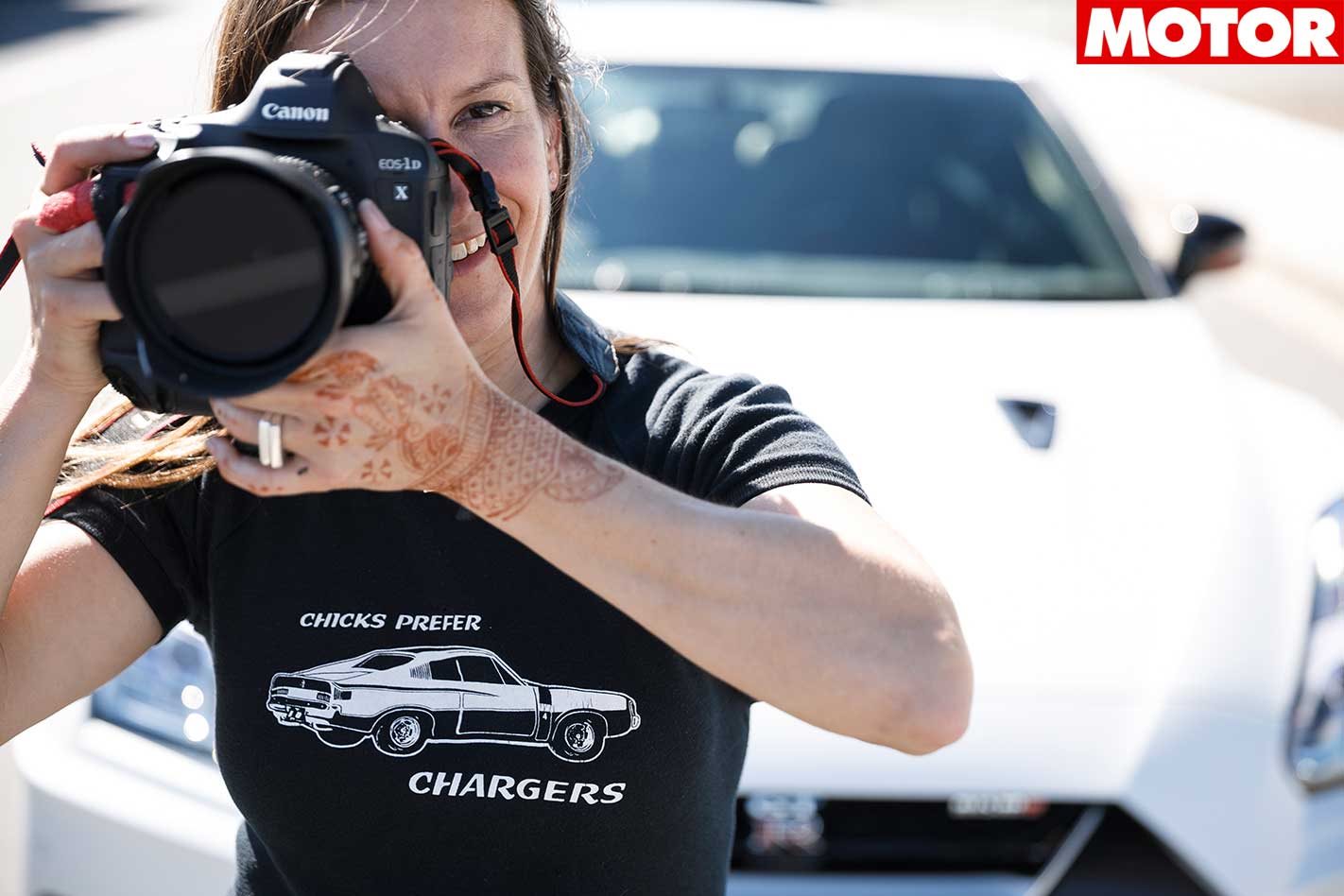 Above: Ellen won the coveted “Best T-Shirt Of The Week” award. And she would know!

Morley is a bit doe-eyed and wistful, though – although it could have been a touch of wind – and even stops insulting me for 10 minutes (okay, two minutes) as he gently guides the big, jostling, pulsating HSV through a bright and warming spring afternoon.

“End of an era, this is,” he opines wistfully, tapping the steering lightly. I nod in pretend interest. You know, gotta be supportive and all that. 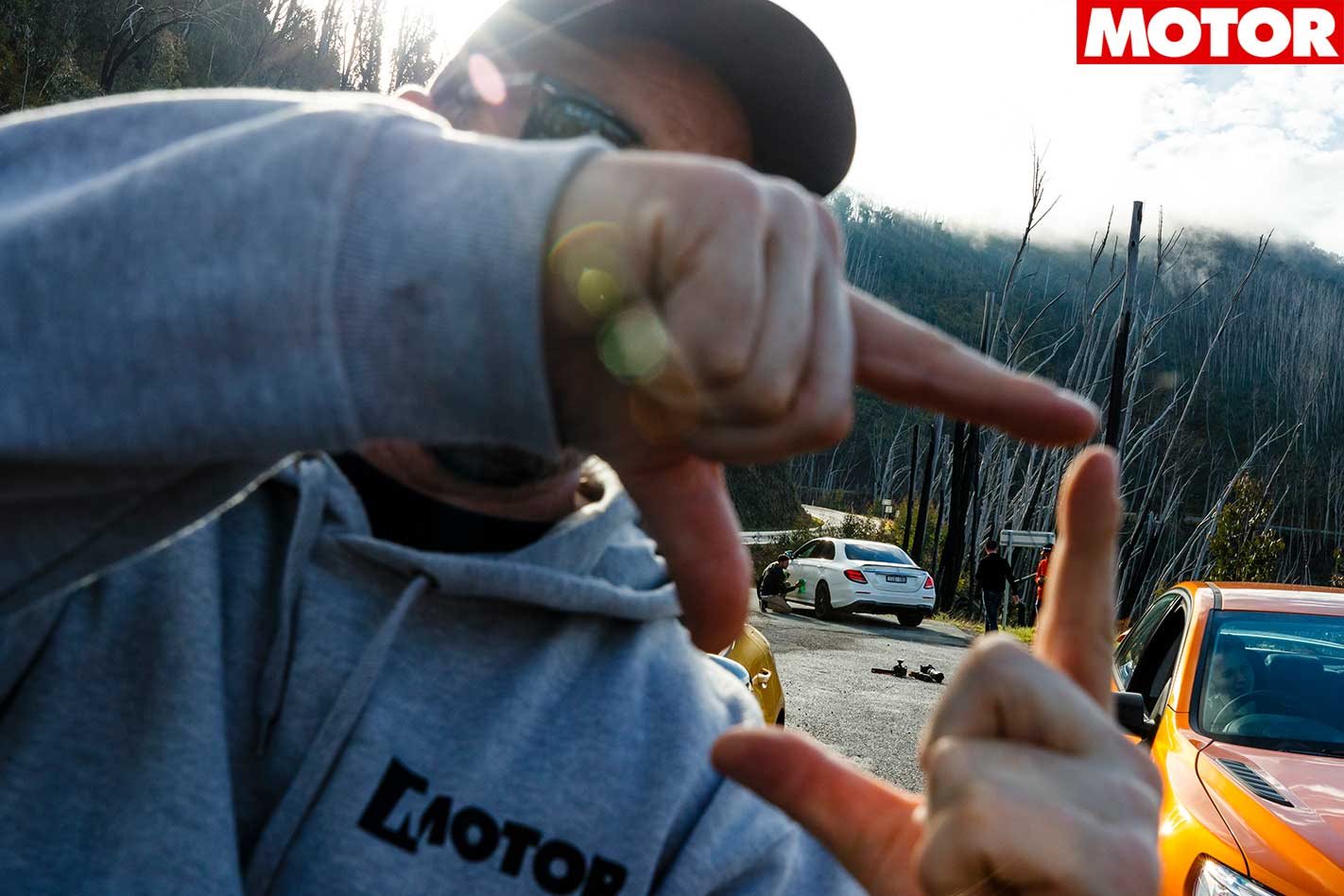 It’s a soft start today as we roll into the circuit, as art requirements take the place of, you know, actually driving stuff. It’s my first chance to take in the field, too, and it’s an interesting one.

What it lacks in poster-worthy exotic metal, it makes up for in rarity and uniqueness. You won’t, for example, see the W1 very often in traffic, nor the Nissan GT-R Nismo. Or, for that matter, a BMW M4 CS. And there’s a bit of poke throughout, too – a 375kW Alfa Romeo Giulia QV here, a 294kW Audi TT RS there, and a few in the 400-plus club, too. 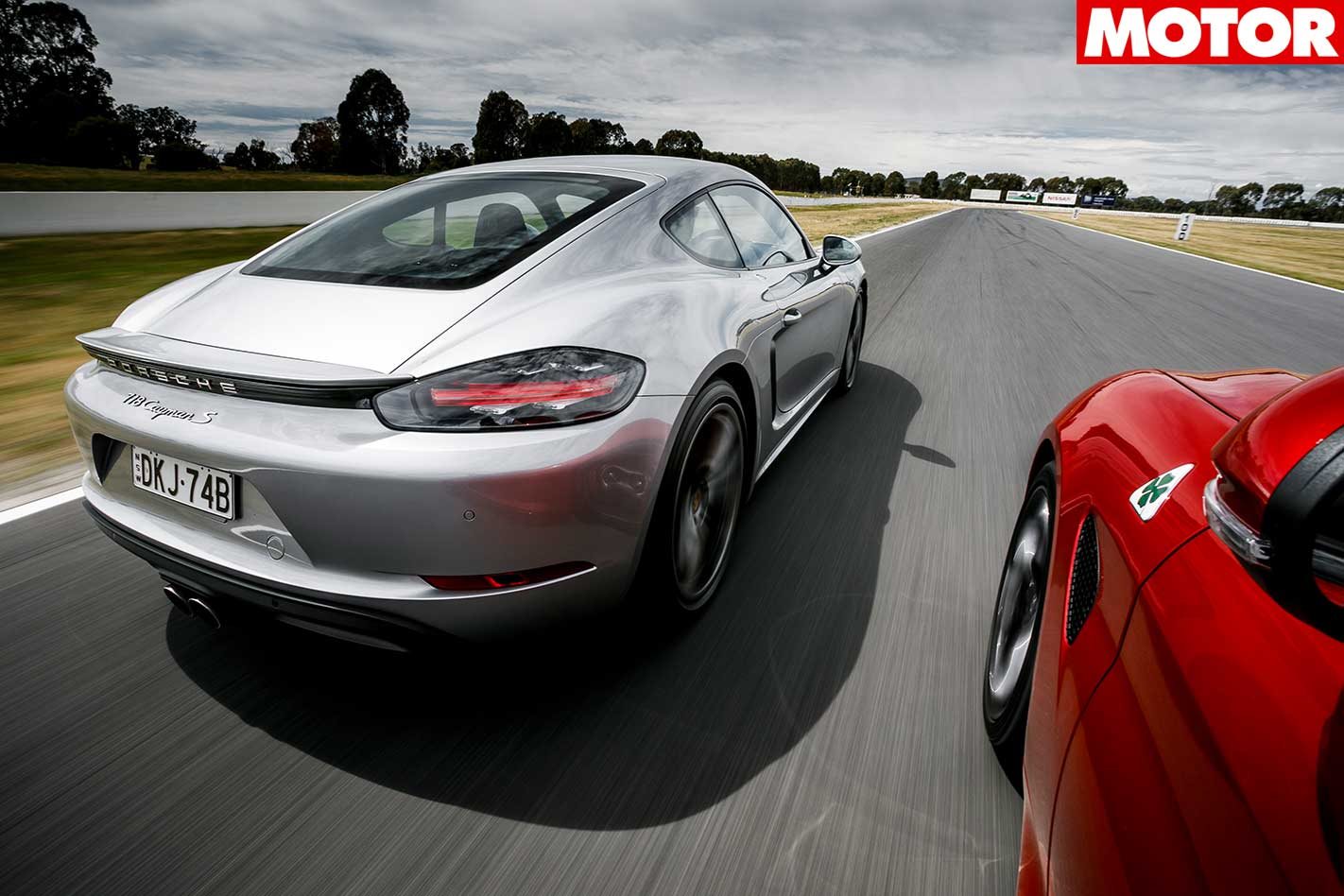 New Boy Trent is grinning from ear to ear at it all, and I try to remember back to my first PCOTY and the feelings I may have had. But it’s no use. My tar-black heart has erased any such notions a long time ago.

The balance of the field filters in, but it’s soon apparent that one is missing. Well, at least that’s what I ascertained from the remark overheard from a Person in Charge. “What do you mean it isn’t here yet?” 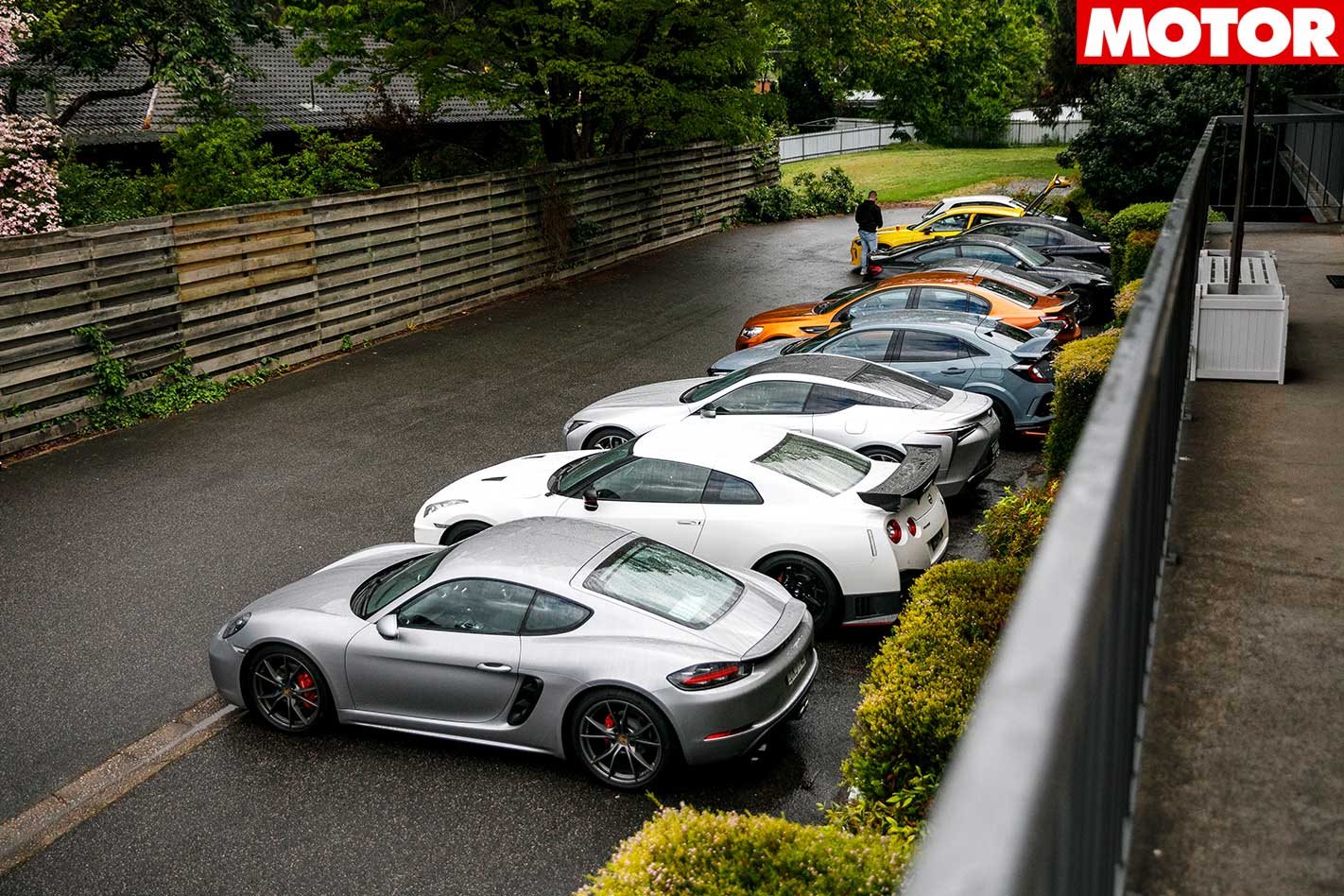 After an evening in the pub not drinking and a night in the Benalla Inn failing not to hear Aaron and Felicity from regional combine attachment sales cackling away about Bev from accounts, it’s an 0730 muster from DC to assemble at the track.

My spirits are already dashed – I have literally been waiting all year for a bowl of porridge from the Benalla bakery, but the guy who makes it doesn’t work on Tuesdays, does he? – so Dave and I make do with an 0817 arrival. And we’re not the last.

A truck bearing gifts shaped like the most amazing Lexus visage since the LFA has showed up, bringing the field to order. Trent is ecstatic. 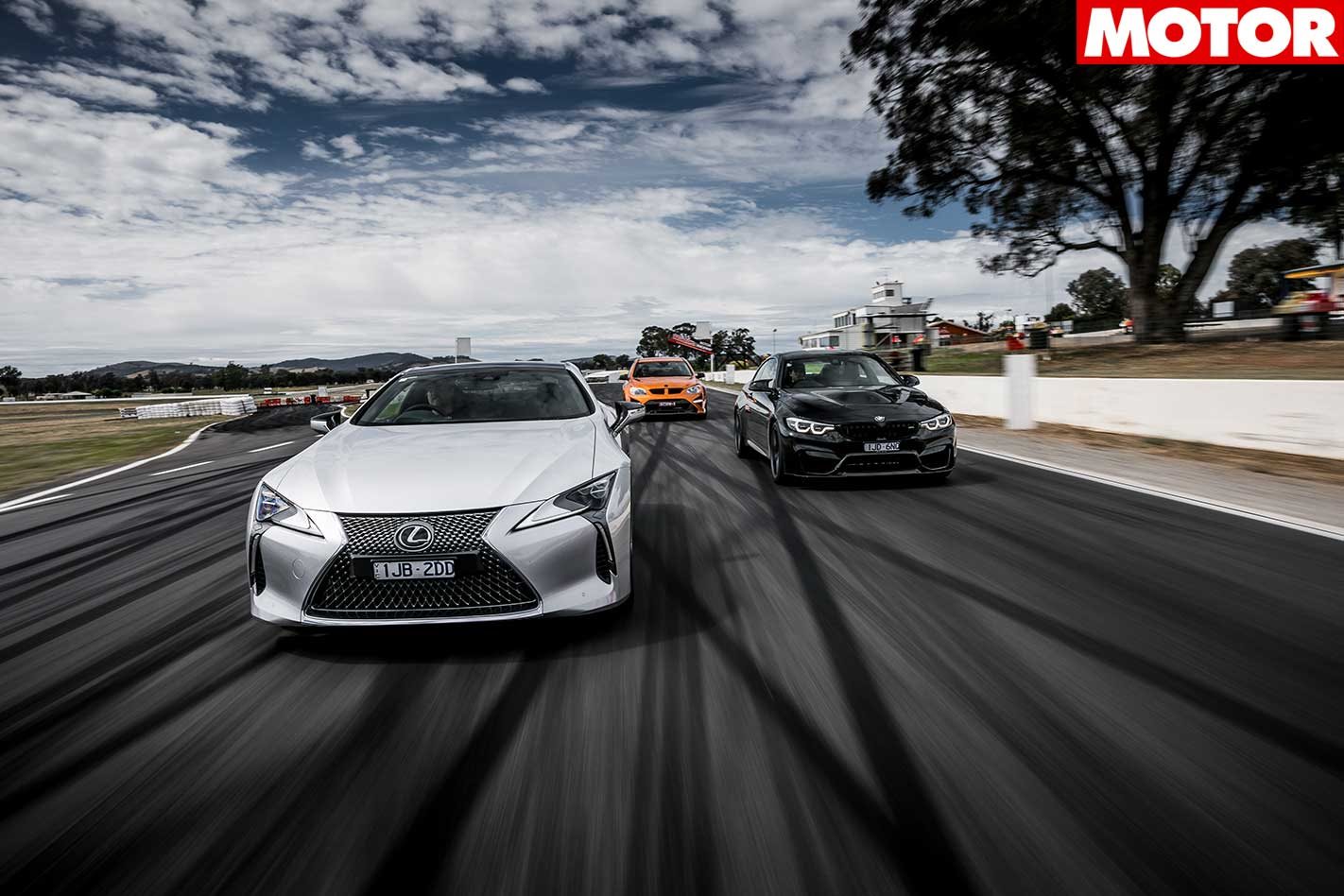 First order of business is, of course, thraping the bajeezus out of all of them in a straight line. It’s always a spectacle, but the thronging horde of 14 people crowd a little closer to the pit wall – without hi-viz vests, either, to the chagrin of the OH&S contingent – when the W1 lines up for a go. And it doesn’t disappoint, either.

There’s a reason that people like steam trains, fighter aircraft, racing trucks and big things that make noise... because they are utterly amazing to watch. The W1’s supercharger rents the air like a plummeting Spitfire, while its exhausts bellow like a pissed-off T-Rex as it hurtles over the deck like an orange torpedo. Oh sure, the Mercedes-AMG E63 S roars like a ’50s powerboat and the GT-R looks like a ground-bound ICBM, but the HSV just lights up the day. 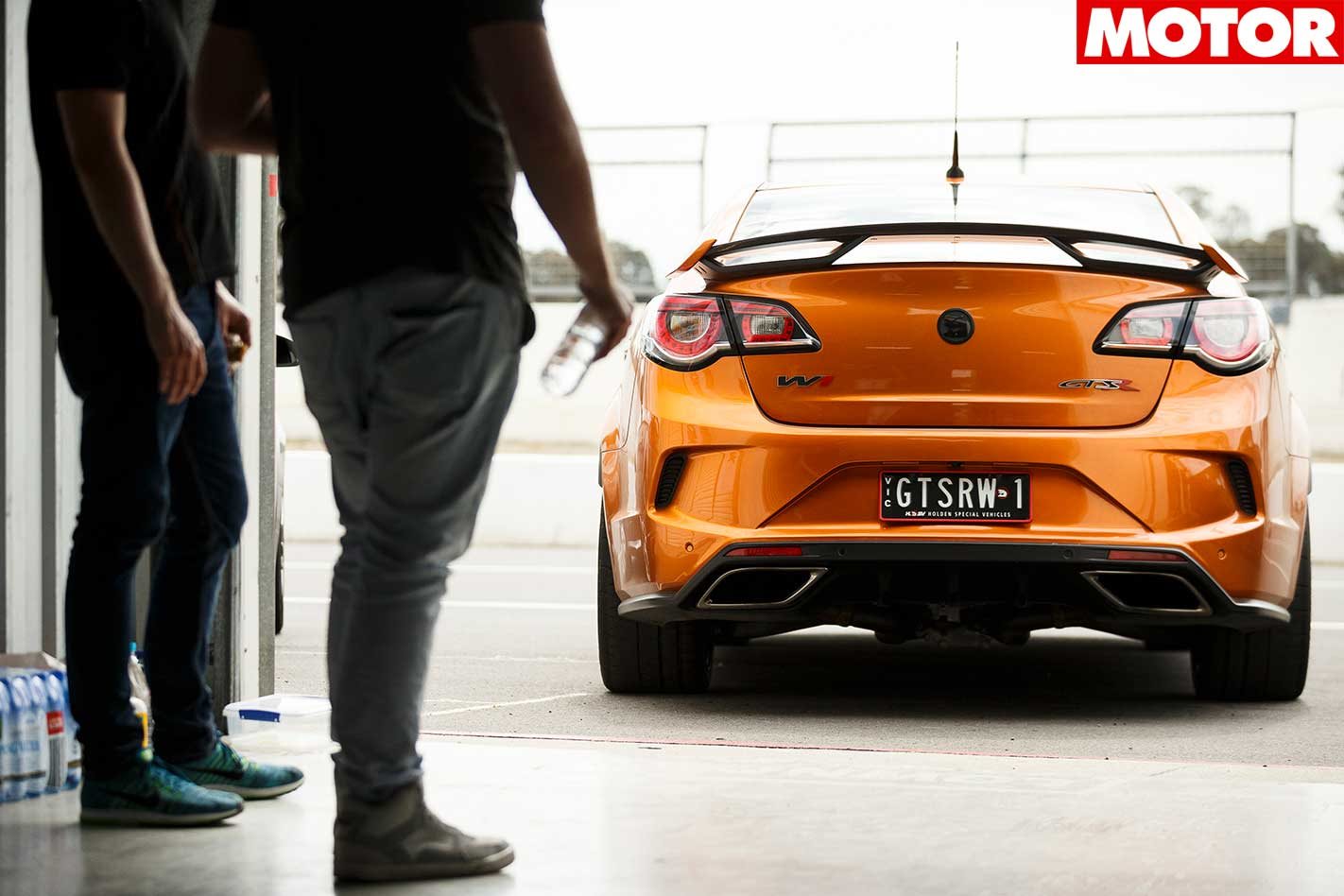 Soon, though, the lads have had their fun, and after an admonishment from Scotty to spare the rod on the BMW – “Save the brakes for Dave,” he cautions – we’re allowed out for a play.

Speaking of Dave, he arrives fresh from an early finish at the Gold Coast Supercars, in his unassuming black SS company car, singularly bereft of any sort of entourage, excessive sponsor clobber and any kind of attitude at all.

“Hi, I’m Dave,” he proffers, introducing himself to the entire team. The kid’s taken a few lumps in the media over the years, but he’s still refreshingly and disarmingly... I’d like to say ‘normal’, but he’s chosen to spend a week with us. 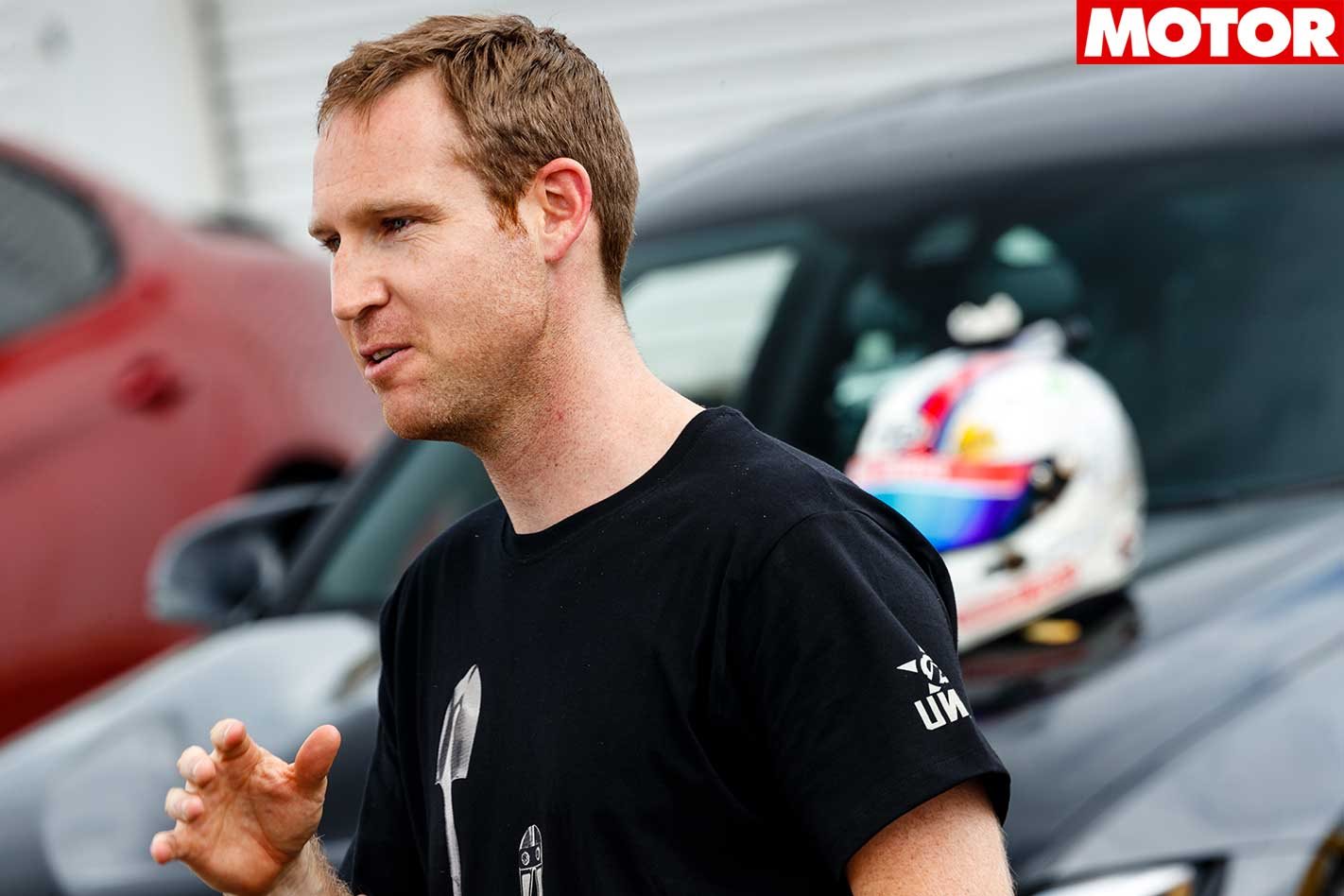 After a quick briefing about his role as test jockey for the day, Dave sets out in the Kia Stinger – and returns a tad whiter than he was before he left. “Jesus” he says. “Nearly crashed that thing at turn one. Not that good, is it?”

Given we’re testing the Stinger in the midst of a media love-in not unlike the launch of the Holden Monaro in the early 2000s, we quickly come to the realisation that there’s something about this guy we really like. 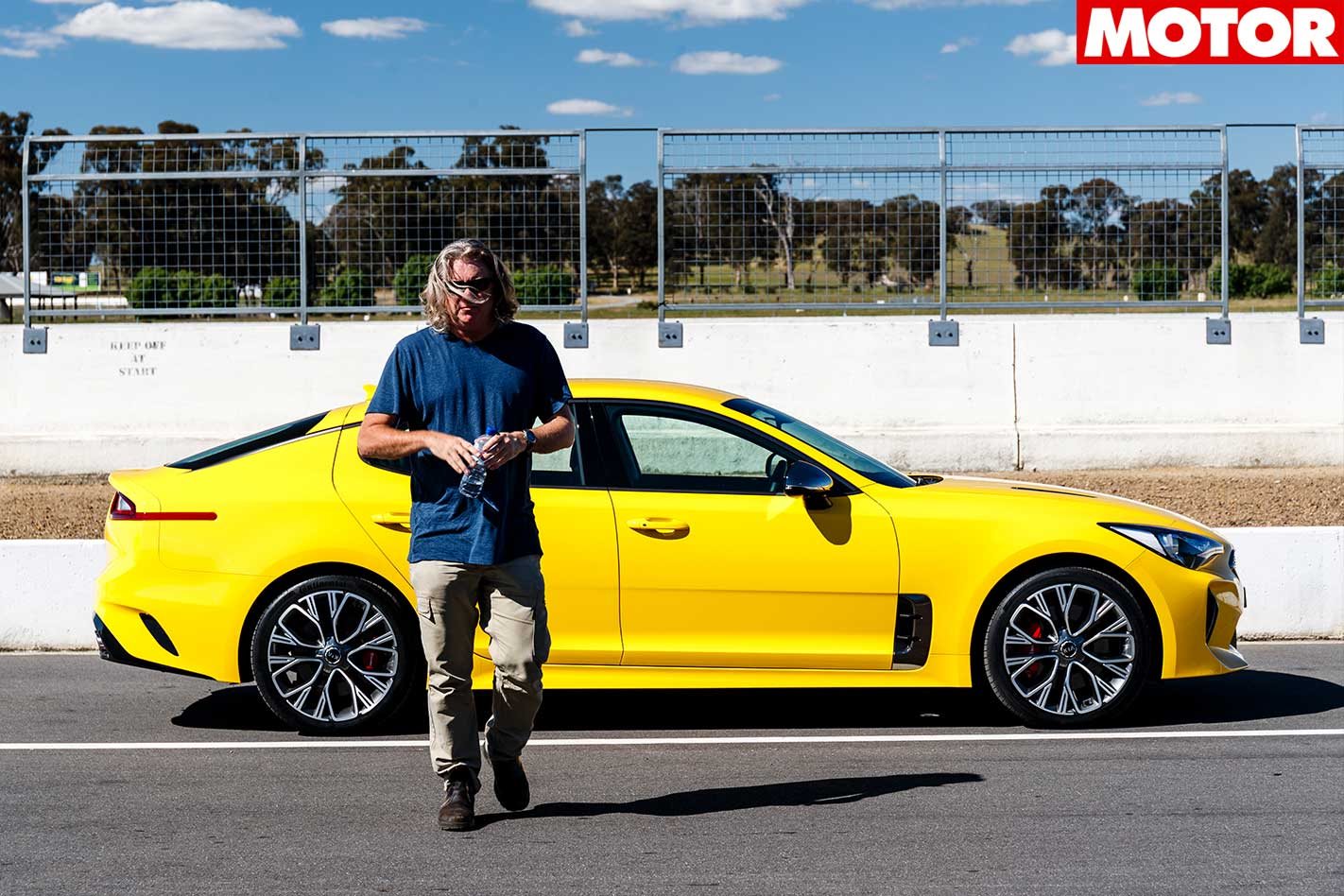 What you see is what you get. Dave continues to put the field through his personal ringer. It’s a bit hard to reconcile the fact that this is the Bathurst 1000 2017 winner, ragging a BMW M4 CS like he stole it, hanging out with a bunch of motoring hacks he’s only just met. He doesn’t eat doughnuts, though, so that’s a negative.

We work through the field a car at a time, while whispers about favourites start to filter through. Like the Honda Civic Type R. It’s the most outgunned car here – it has less than half the power of the W1 – but the jungle drums are beating about it early on. 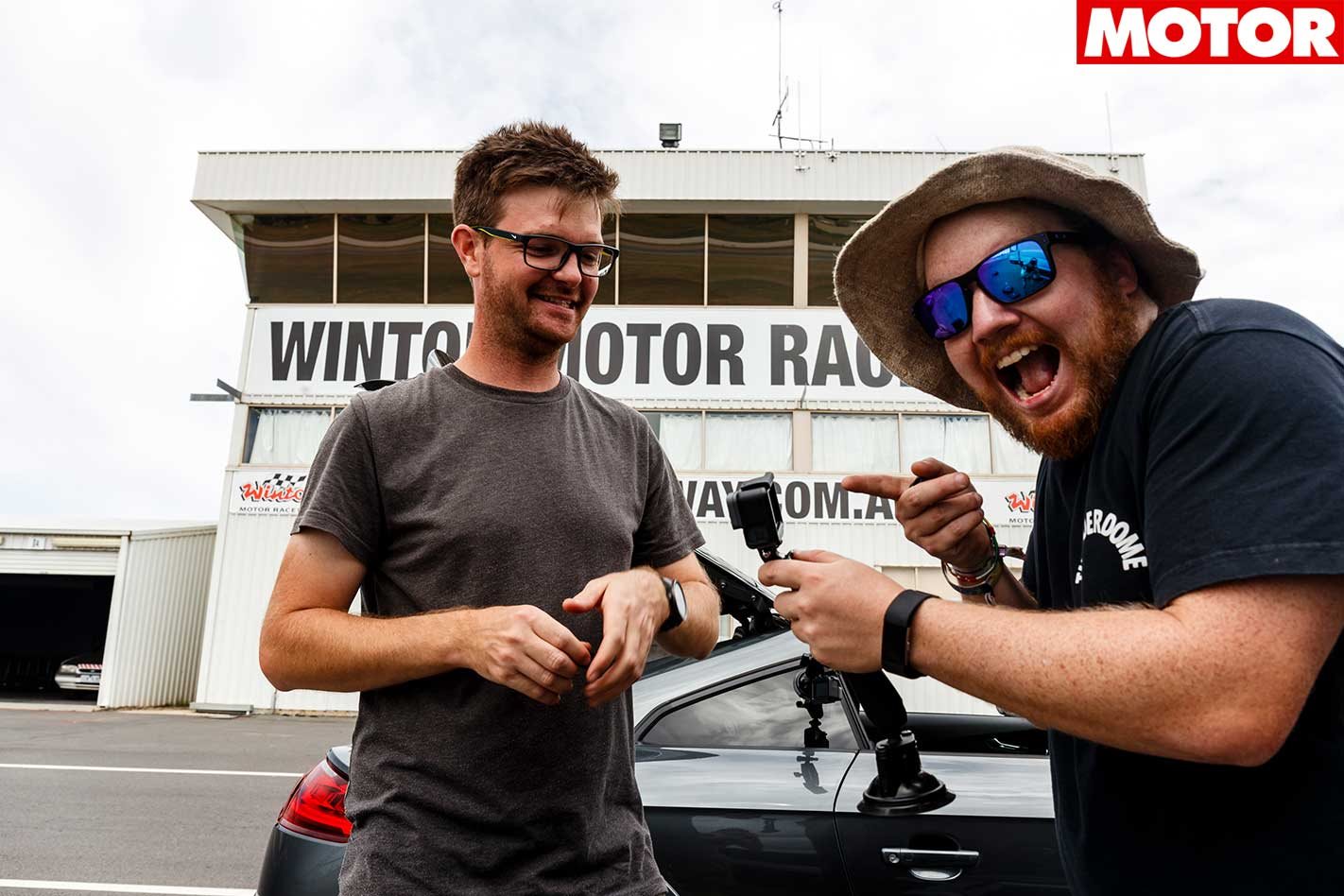 Speaking of the W1, again the sweating minority pushes its way to the pit wall as Dave wheels out what is essentially his company car for a heroic flyer around the tight layout.

The Hubble telescope could hear the W1’s primal roar. It’s hair-tingling stuff for those of us with actual hair (that’s a dangerous joke to make when we’ve not paid your invoice yet – Ed).

“Expected a bit more, to be honest,” is Dave’s first remark when he returns. You can literally hear the jaws dropping. 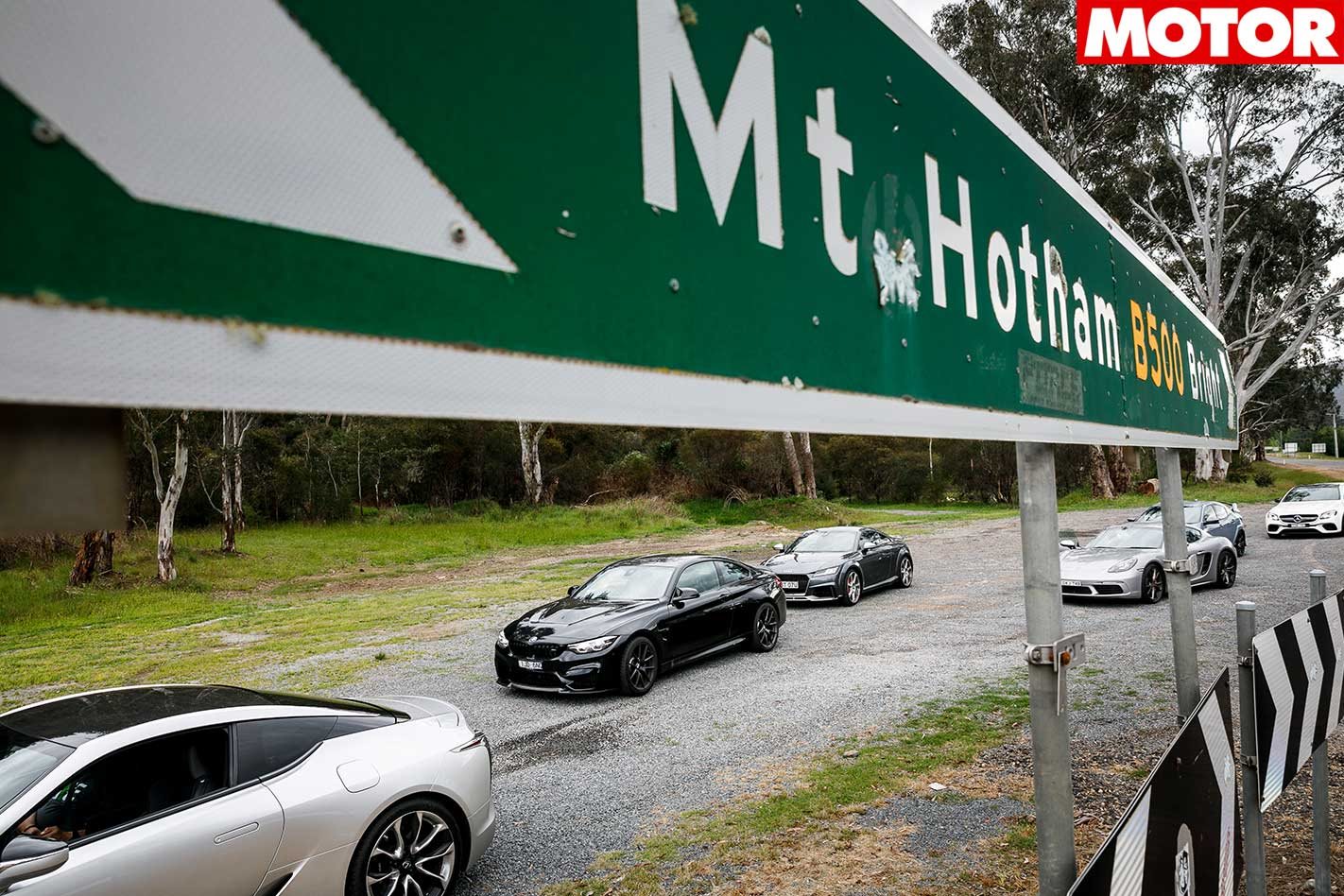 Another pub meal before we head into the hills around Mount Hotham the next morning for back-to-back work that, well, let’s just say attracted some interest from the locals.

Hint: don’t use the W1’s loud exhaust mode all the time. Don’t ask me how I know that. And again the Civic scores more than its fair share of water-cooler chat. Interesting. 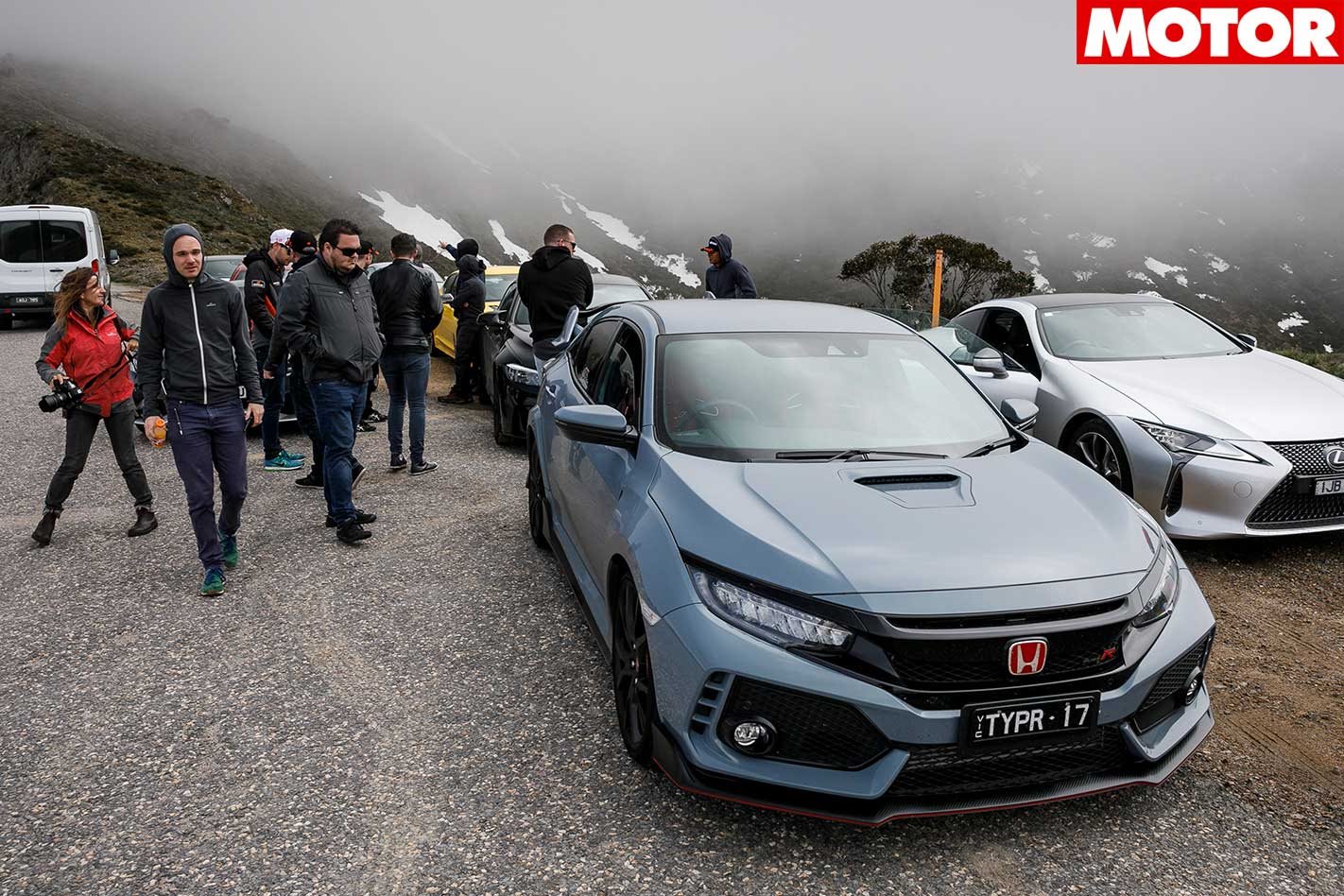 After a late lunch, it’s back on the horses to climb Mt Hotham, where we give in to the desires of the chattering art classes and their demands to take amazing pictures of the sunset. Our reward is a late blast back down the mountain, for which I score the W1 for what is the last time in 17 years I’ll test an Aussie car at a big event.

The W1 is a contradiction of big torque and longish wheelbase on stiff SupaShocks, gummy Pirellis and massive stoppers. And it’s hilarious. I pay a quiet tip of the hat to the guys and girls behind the Zeta platform, the Aussie damper makers and the HSV engineers who pulled off this audacious rig, sitting for a moment in the hotel car park in quiet... reflection, I guess. 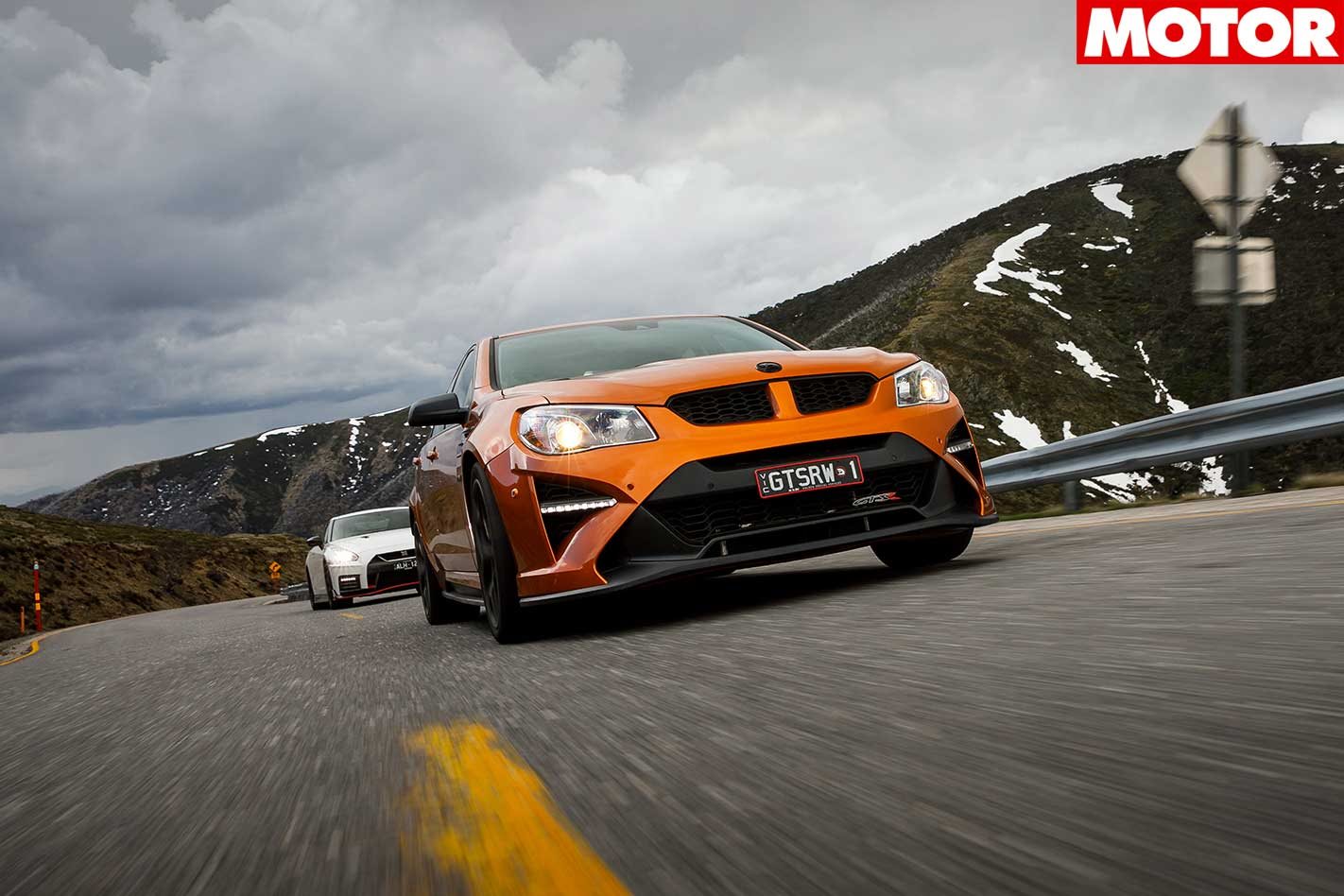 Maybe Morley’s right. Gotta be a first time for everything.

The pub is closed, but the crew has somehow found a mess of pizzas and a few boxes of beers, and the entire PCOTY crew sits around, chewing the fat and talking shit about cars. It’s one of the nicest PCOTY moments I’ve ever had. 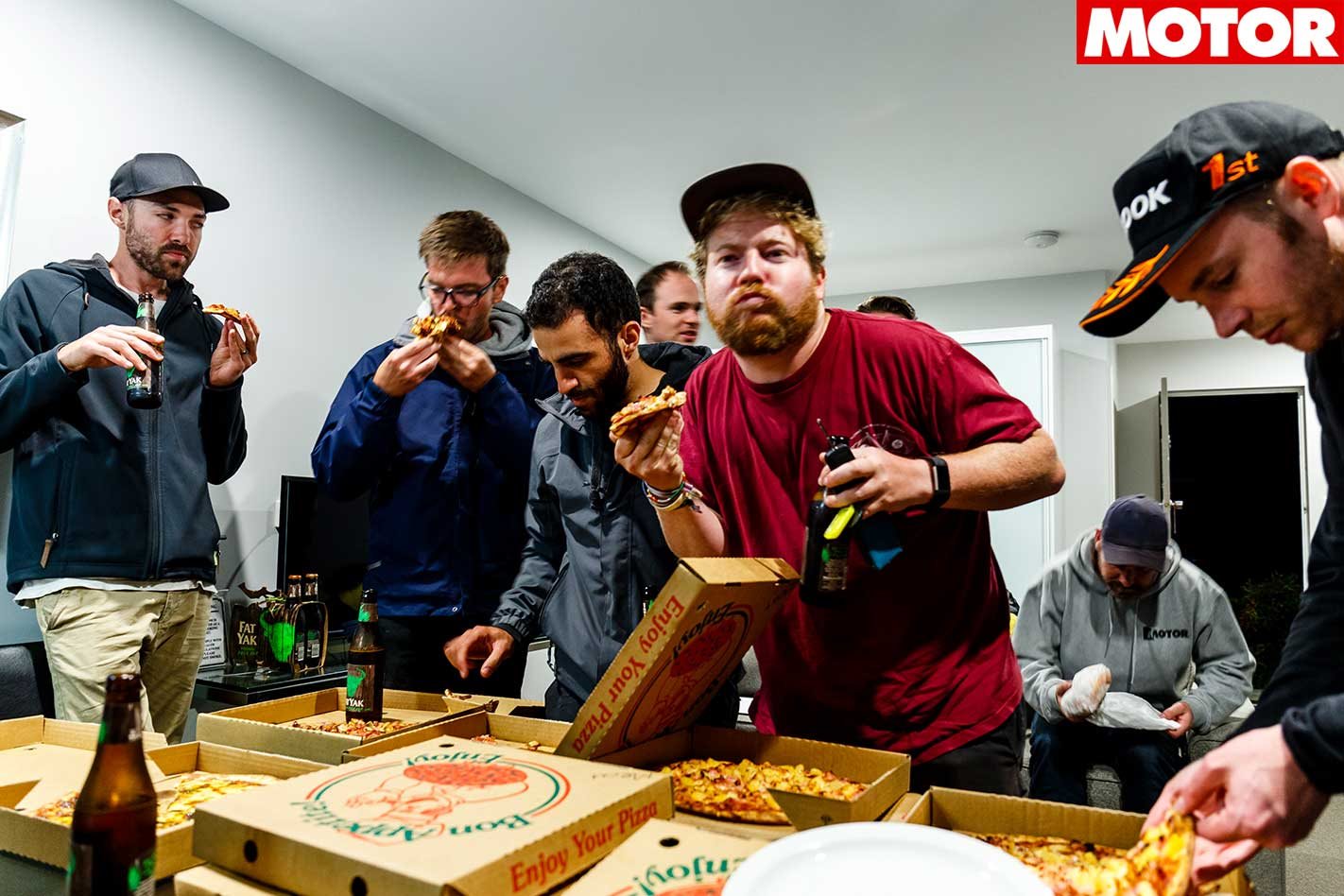 Above: MOTOR’s version of The Last Supper not likely to stand the test of time. And not just because it’s the exact moment Josh tasted the Band-Aid

Next year is a long way off, but for me, that pizza dinner wrapped up everything I’ve loved about MOTOR and its people since day dot. No matter who wins the event, it’s these moments that make the event. This work thing ain’t so bad after all. 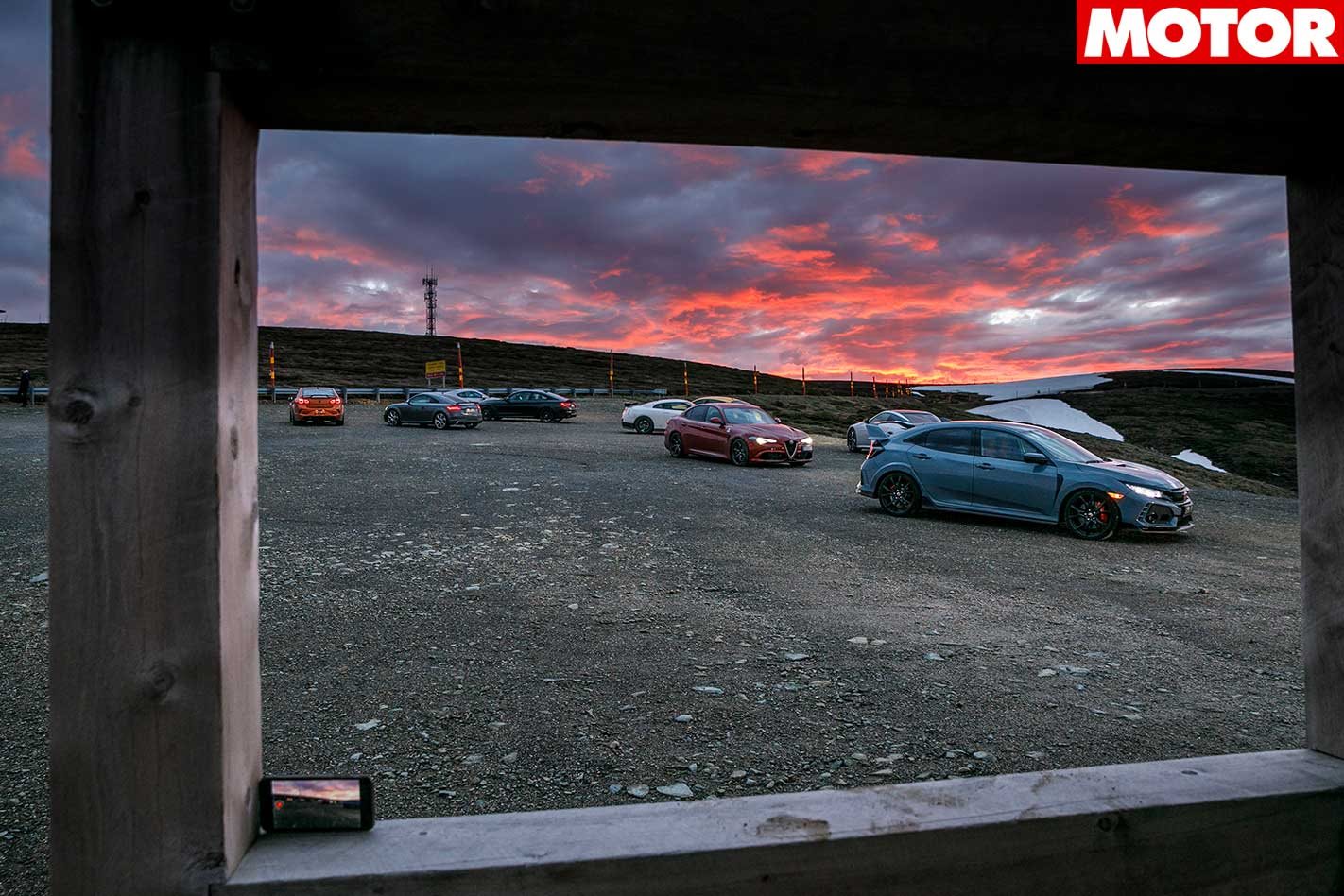