Red versus blue. Green versus gold. To Bathurst from the Bush we drive these True Blue Aussie heroes

IT WON’T be like this for much longer – the latest and greatest performance Ford Falcon versus its hot-shot rival from across the Yarra, Holden’s range-topping V8 Commodore – so we may as well drink in the moment and enjoy it.

Up until now, it would have been gloves on and allegiances laid bare in a stoush like this. Ford versus Holden, blue against red, winner takes all. But shit has gone down and perspectives have changed. When all that lies ahead is a road that ends, we may as well treat it like a bar tab closing, or a favourite band’s last encore, rather than a race to the finish. We’ll be back; it’ll just be a little different. 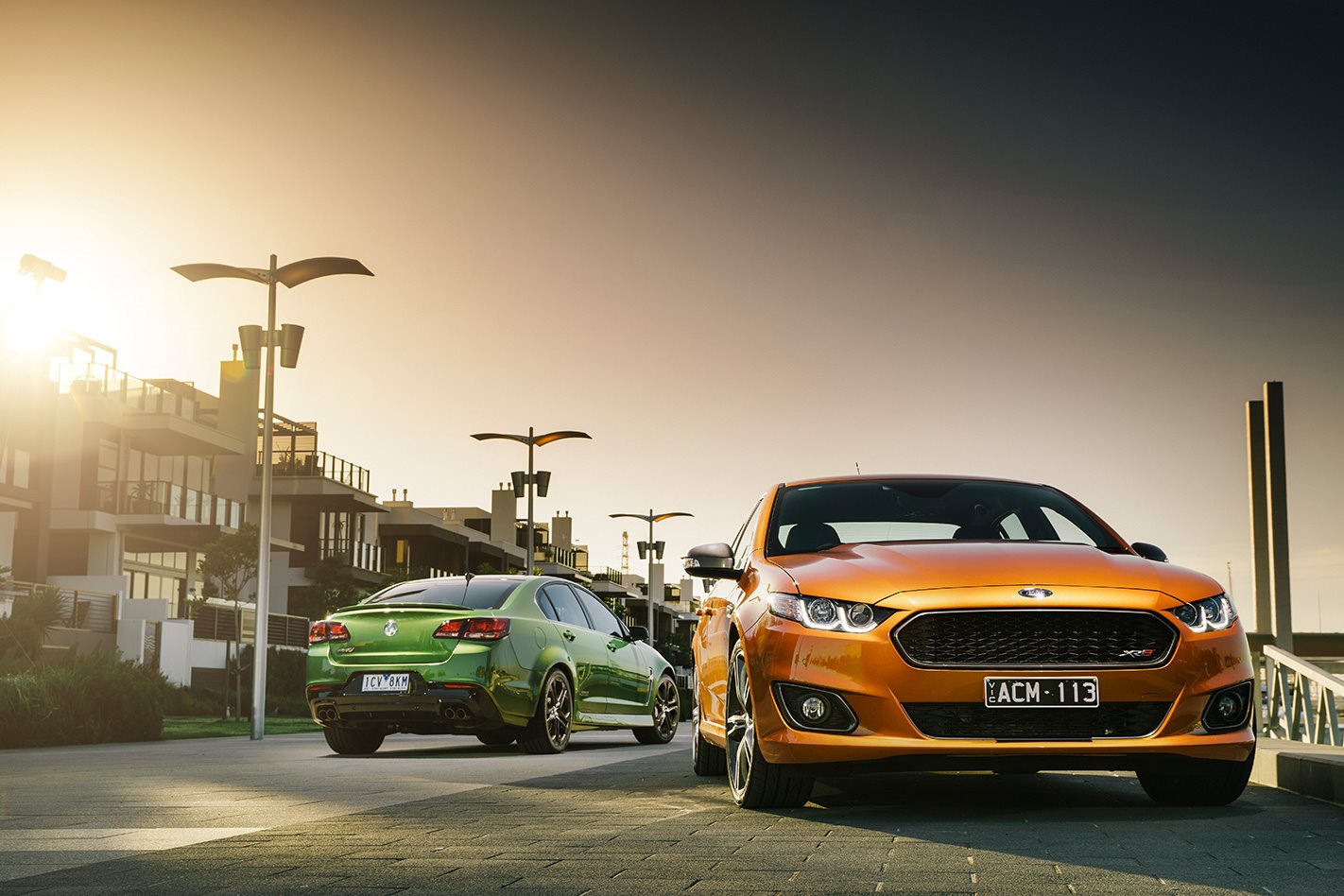 So top up your drinks, raise your glasses and crank the volume knob for what is destined to be one of the last-ever Wheels home-grown V8 comparos. Broadmeadows to Bathurst, the scenic route.

BREAKFAST at The Lott Foodstore in Cooma is always something to look forward to, but then so is slaking the High Country thirst of our V8 brutes and calculating the numbers. Roughly 355km since Albury demands close to a full tank in each car, and the Holden finally comes out in front; 16.3L/100km versus 17.9. 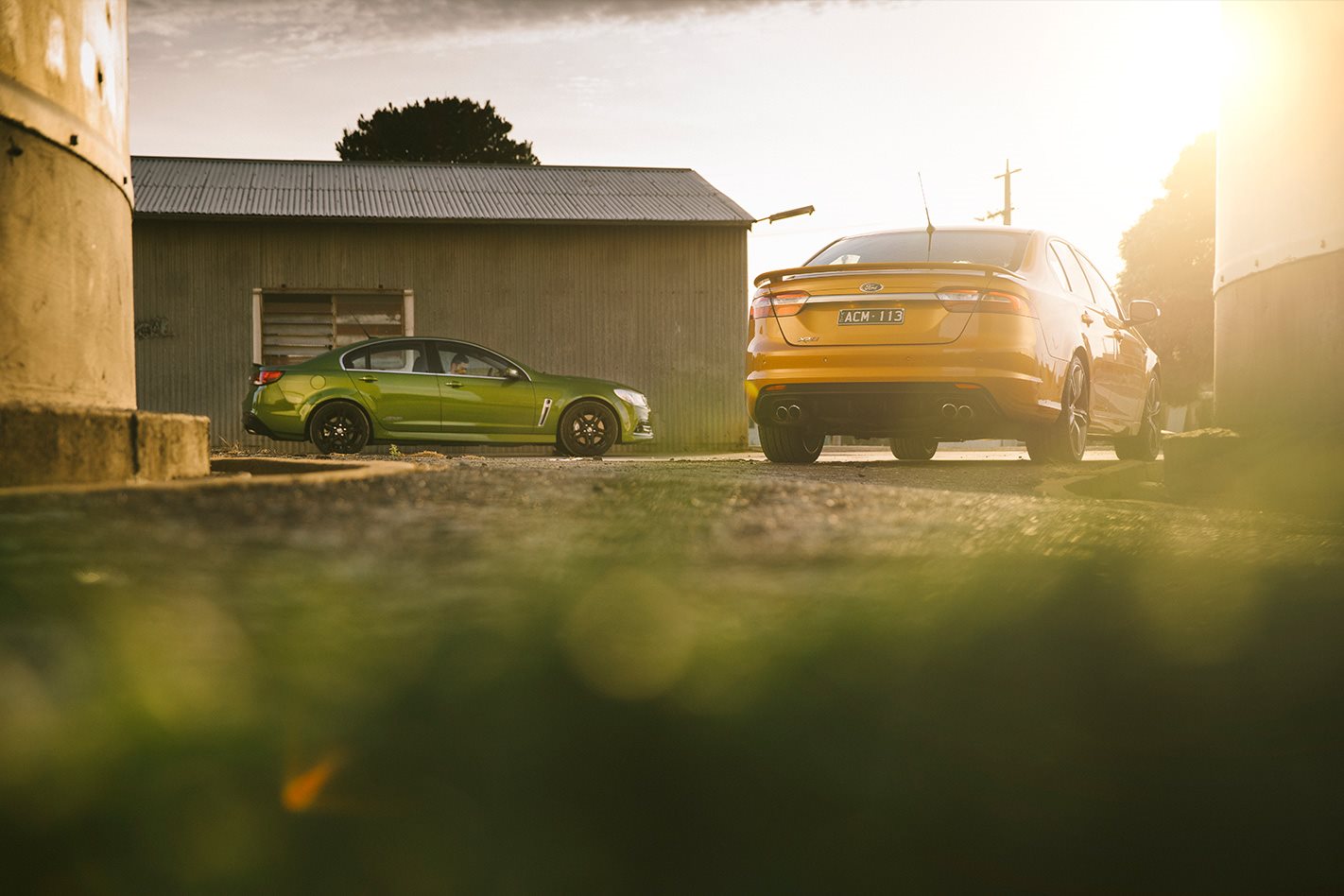 Next job for the day is to ply the Monaro Highway to Canberra, pull up in front of Parliament House and raise a middle finger to the pollies who nailed the coffin shut on our car industry.

Easier said than done. The G20 summit is underway and the place is swarming with AFP, police dogs, undercover vehicles and cops on foot. No matter where we drive, our brightly coloured interstate sedans act like a burqa passing through border control. The British PM is visiting and our cameras and film equipment are causing such a disturbance that we leg it out of there – at the speed limit – before we get arrested. 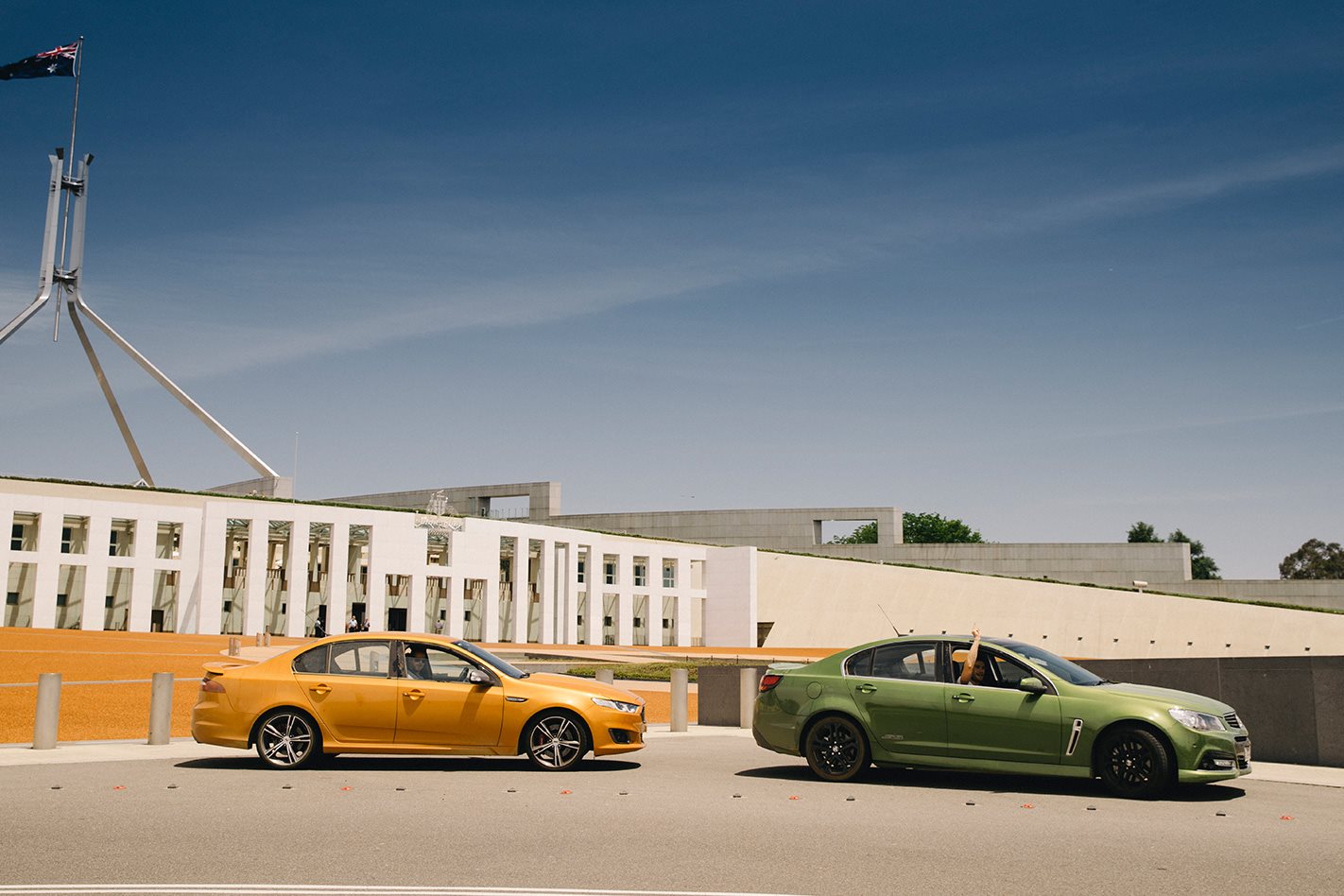 We skirt around Yass on the Barton Highway, then peel off onto Lachlan Valley Way in an attempt to make Parkes, 232km away, to visit ‘The Dish’ – a 64-metre movable radio telescope that transmitted images of man landing on the moon in 1969. But it’s already mid-afternoon and the detour would leave another 400km to reach Mount Panorama.

A wee break and figurative round-table discussion later, we decide our Parkes excursion is so close, yet so far, and there’s surely some irony in that. Imagine if the Yanks felt the same way about reaching the moon? It’d be like quitting on a century-old car industry… 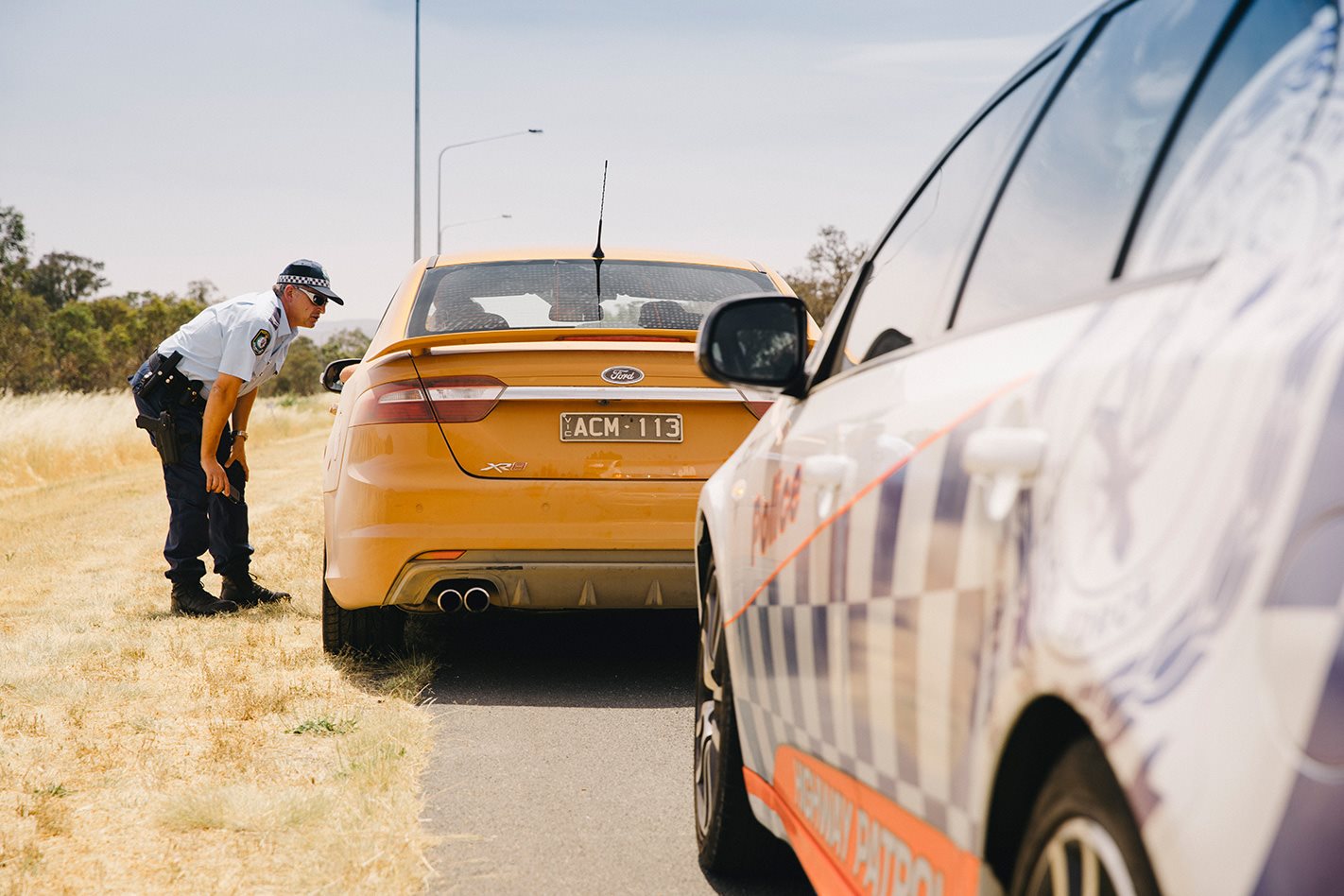 From Cowra, it’s 106km north-east on the Mid Western Highway to Bathurst. Outside, the temp is nudging 39 and, even inside the Commodore SS-V Redline’s chilled and neatly upholstered cabin, I’m sweating. But there’s a refined cohesion to its interior that the Ford Falcon FGX XR8 lacks.

A better ride is obviously part of it, but there’s also stuff like properly padded door armrests, more convenient bottle holders, more tactile plastics and even a neat keyholder inside its front armrest bin to complement the keyless start. You also get a bootlid grab handle and a far superior stereo. 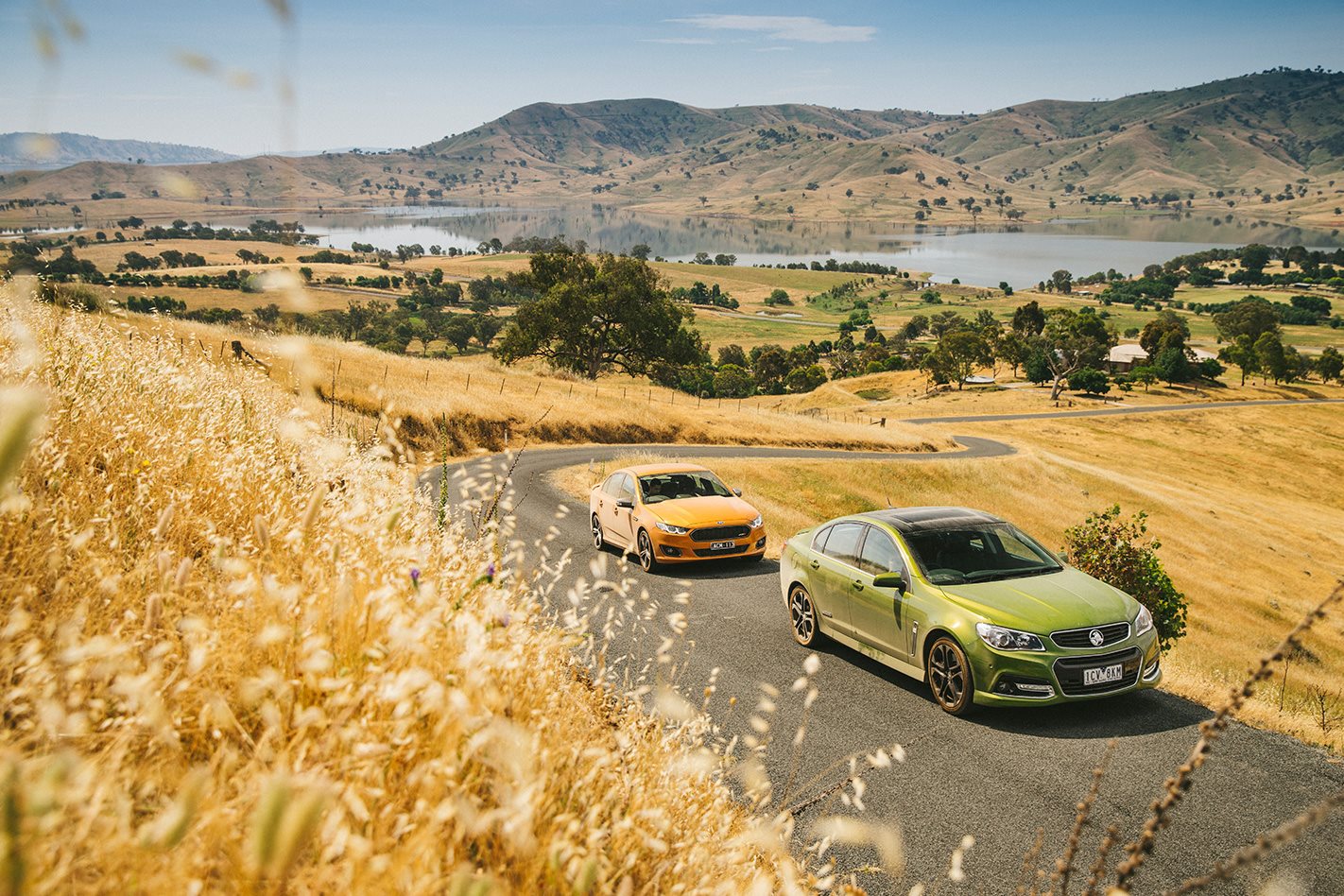 On a broader scale, the SS-V Redline is a much more sophisticated drive, with a depth of dynamic ability that the stiffly suspended XR8 can’t hope to emulate. The Ford will easily win friends with its fantastic engine, pair of USB ports, larger exterior mirrors and agreeable SYNC2 multimedia touchscreen.

It should also win over the Blue Oval faithful with the best interpretation of Ford’s global styling DNA, but that’s about it. Everywhere else, the Holden has its measure, at least in road-car terms. But the Falcon did win Bathurst in 2014, so all is not lost. 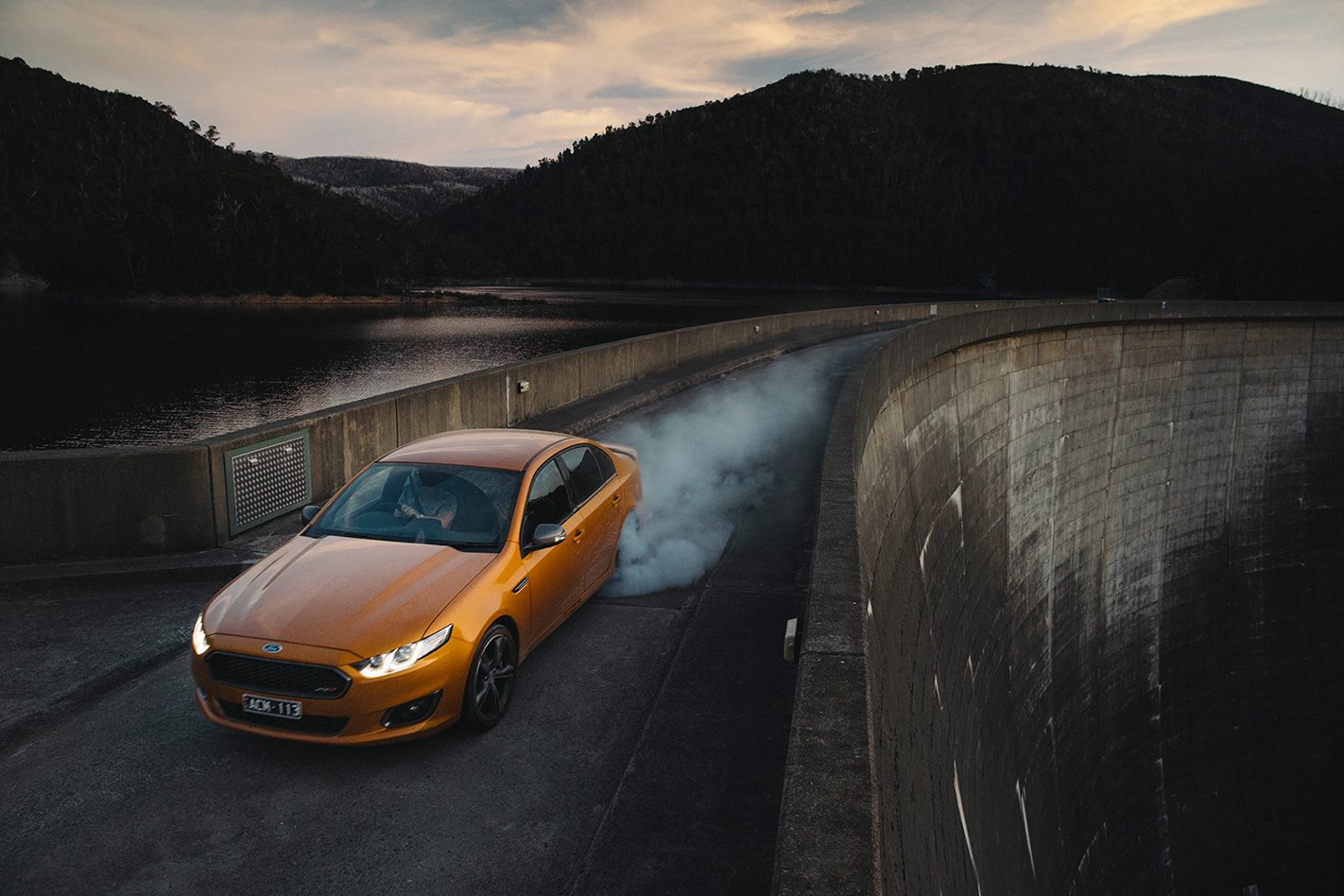 Leaning against the concrete barrier at the top of Mount Panorama, it’s impossible to imagine what the Aussie motoring landscape will look like post-2017. But what is least likely to change is the stuff that laps The Mountain for up to 161 laps every October. Besides the badging and overall shape, almost nothing bears any relation to what we’ve just driven from Melbourne. If Nissan can shove a V8 in the Altima and get away with it, why can’t Holden wedge a rear-drive V8 up the clacker of the equally emasculated Malibu? 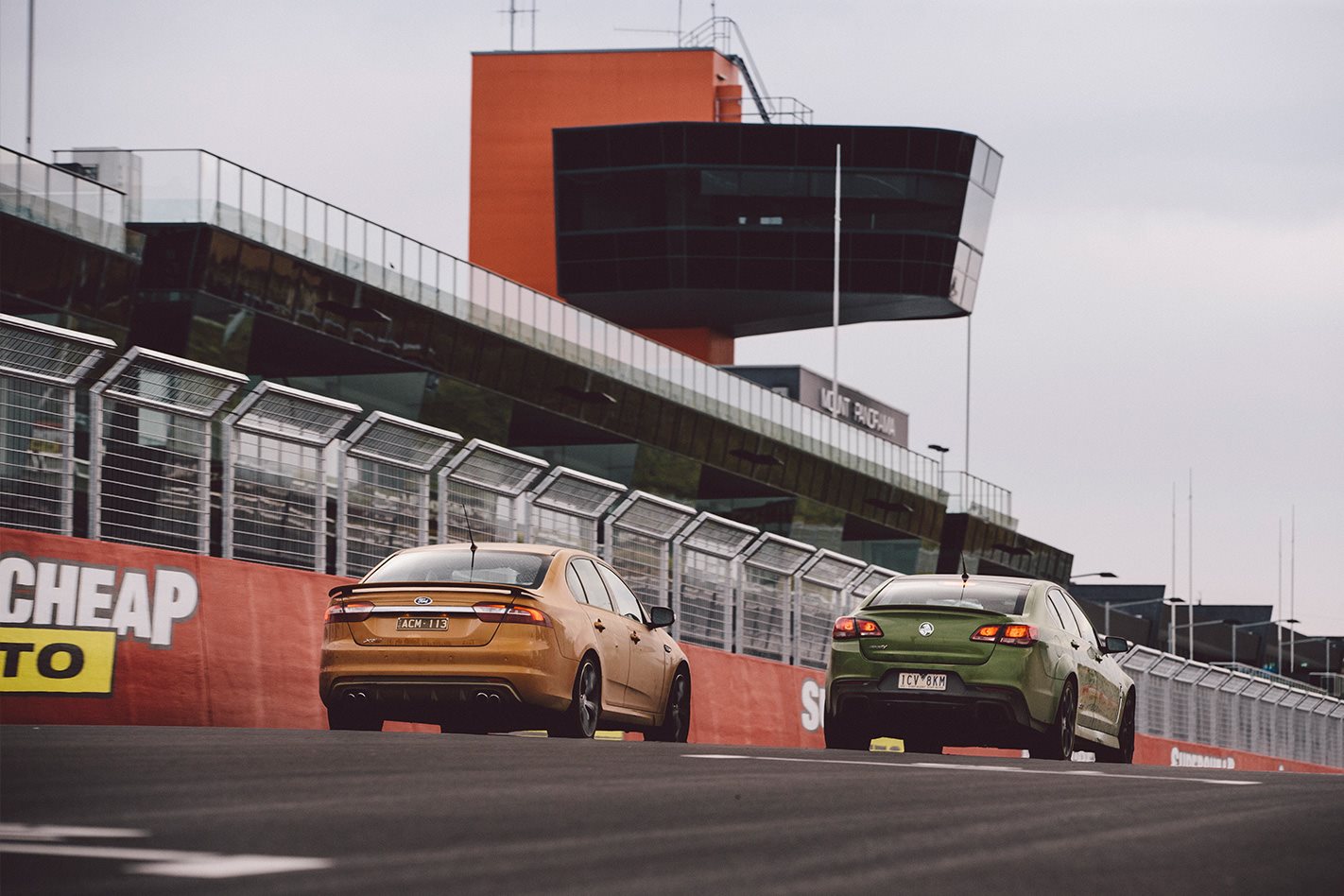 As we knock off the last few interior shots before heading to the pub, a bloke pulls up in a Queensland-registered Camry, eager to check out both the XR8 and SS-V Redline. It seems he’s driven down to attempt his own Bathurst 1000 – 161 laps in a Camry Hybrid on one tank of fuel – and has been practising for the big ‘race’ tomorrow.

Even amid the absurdity of it all, you can’t help but admire the bloke. Only a passion for motoring, however misguided, and a sense of humour could prompt someone to do something like this. So forget the pessimists; with committed enthusiasts like old mate, Australia’s car culture will continue. After a thousand miles in these era-defining muscle cars, it’s a comforting thought. 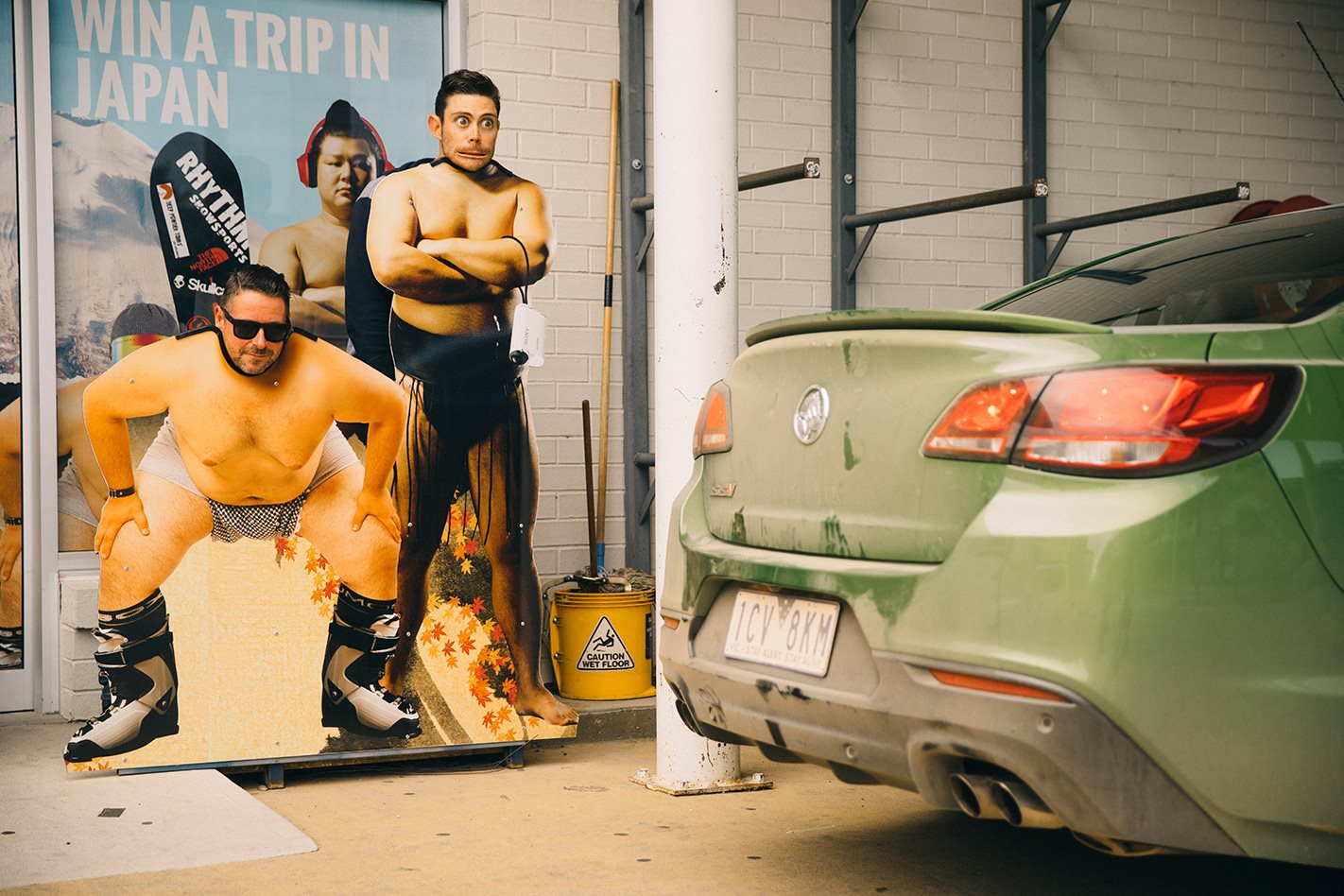