UPDATE: The Aussie collector car world is buzzing with discussion about the online auction of the so-called Chicken Coupe - a 1973 XA GT RPO 83 hardtop Ford Falcon. But what is an RPO 83? And how is it related to the almost-mythical Phase IV GTHO? Read on:

This article on the Ford Falcon XA Phase IV and RPO 83 was originally published in the November 2003 issue of Street Machine. Prices quoted reflect the market at the time.

SUNDAY, 25 June 1972, is the day that the great Australian muscle car died. The news of its demise was carried on the front page of Sydney’s Sun-Herald newspaper in the form of the screaming headline, ‘160mph Super Cars Soon’. Beneath the headline was a story that quoted the then NSW Transport Minister, the appropriately named Milton Morris, describing the cars planned for that year’s Bathurst enduro as “bullets on wheels”. 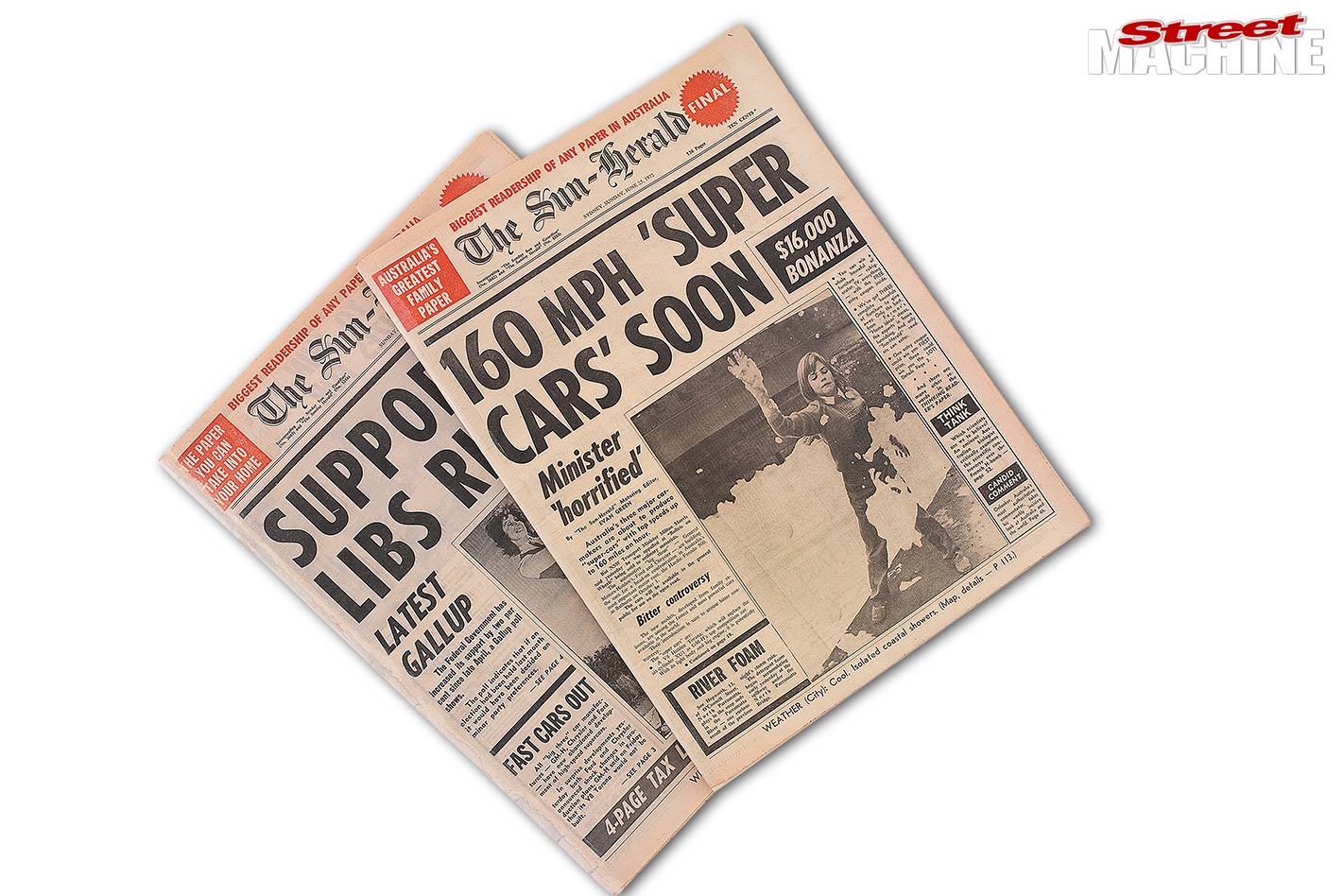 It spelt instant death for the next generation of supercars being built to take on Mount Panorama that year. All three companies scrapped their programs immediately and the most awesome road cars ever planned for production here were to become the stuff of legend.

Feature: The true story of HO down the Hume

Ford’s Phase IV GTHO was one of those casualties, but as much as the premature death of the Phase IV was mourned, it led to the birth of another hot Falcon GT. The XA RPO 83 soon arose from the ashes of the Phase IV and would become the basis for Ford’s 1973 Bathurst-winning XA GT.

The name comes from the production option code RPO (Regular Production Option) 83 which was available on the XA GT and included a number of components from the stillborn Phase IV program. Exactly what those components were remains the subject of debate even today because they varied from car to car.

Whatever they were, it has made the RPO 83 XA GT one of the most sought-after GTs recently, as GT fans have come to realise they were as close as you could get to a Phase IV without shelling out the big bucks needed to get your hands on a real one.

With just three of the four Phase IV GTHOs still in existence it is the rarest, and most valuable car on the muscle-car market. With its connection to the Phase IV, the RPO 83 is also becoming a very desirable model. 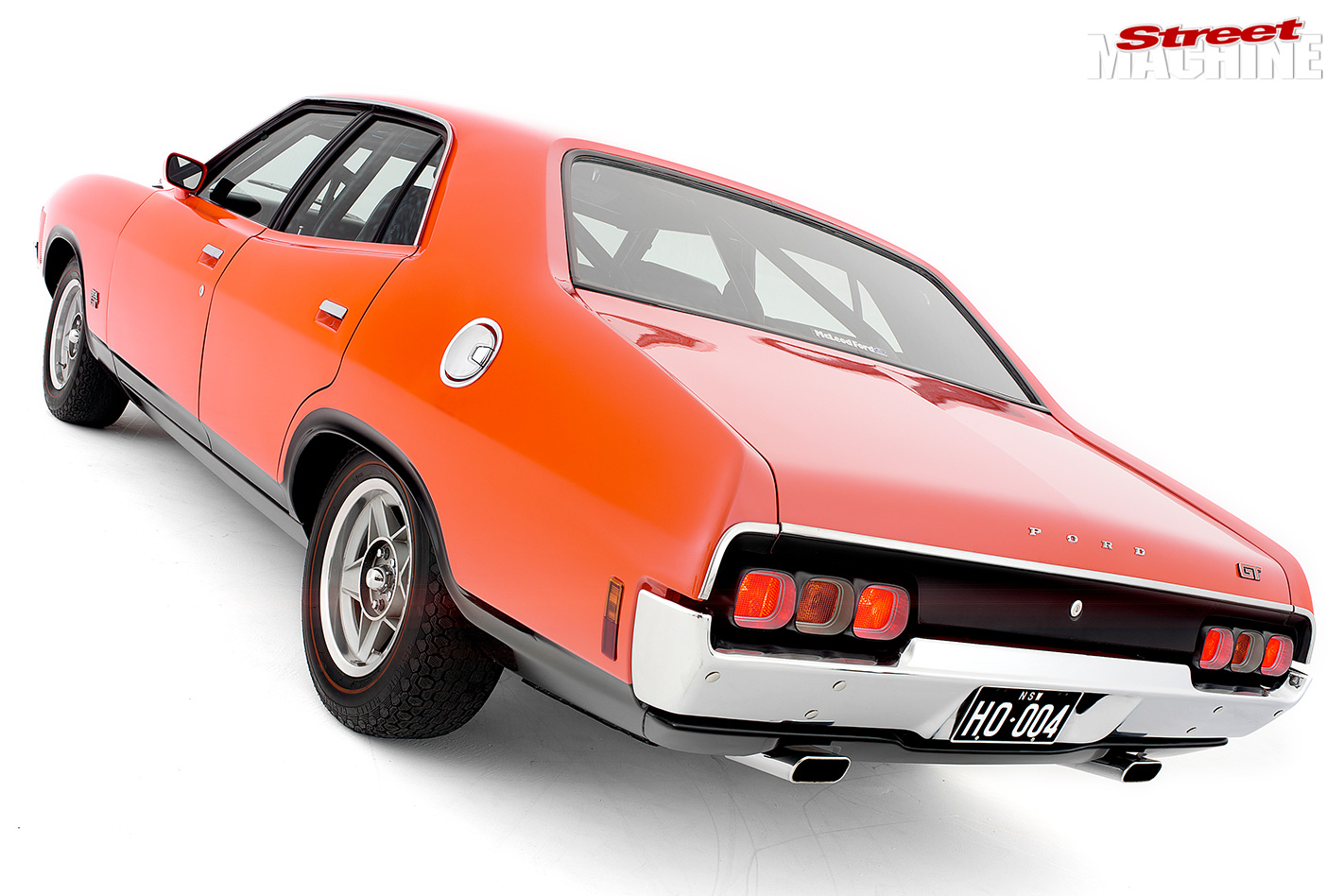 Four XA GTHO Phase IV Falcons were built and subsequently sold. One was the only production Phase IV built and that was sold through Jack Brabham Ford in NSW. It was a Calypso Green four-door sedan and it’s the only one of the four to carry a compliance plate that identifies it as a GTHO. It came with a bunch of options including air-con, sunroof and fast glass. It’s now owned by a collector in Sydney and hasn’t been seen in public for years.

The other three were racecars being prepared by the Ford factory racing team. They were all standard XA GTs as delivered to the Ford Special Vehicles factory in Mahoneys Road where they were built up to Phase IV specs by the race-team mechanics. 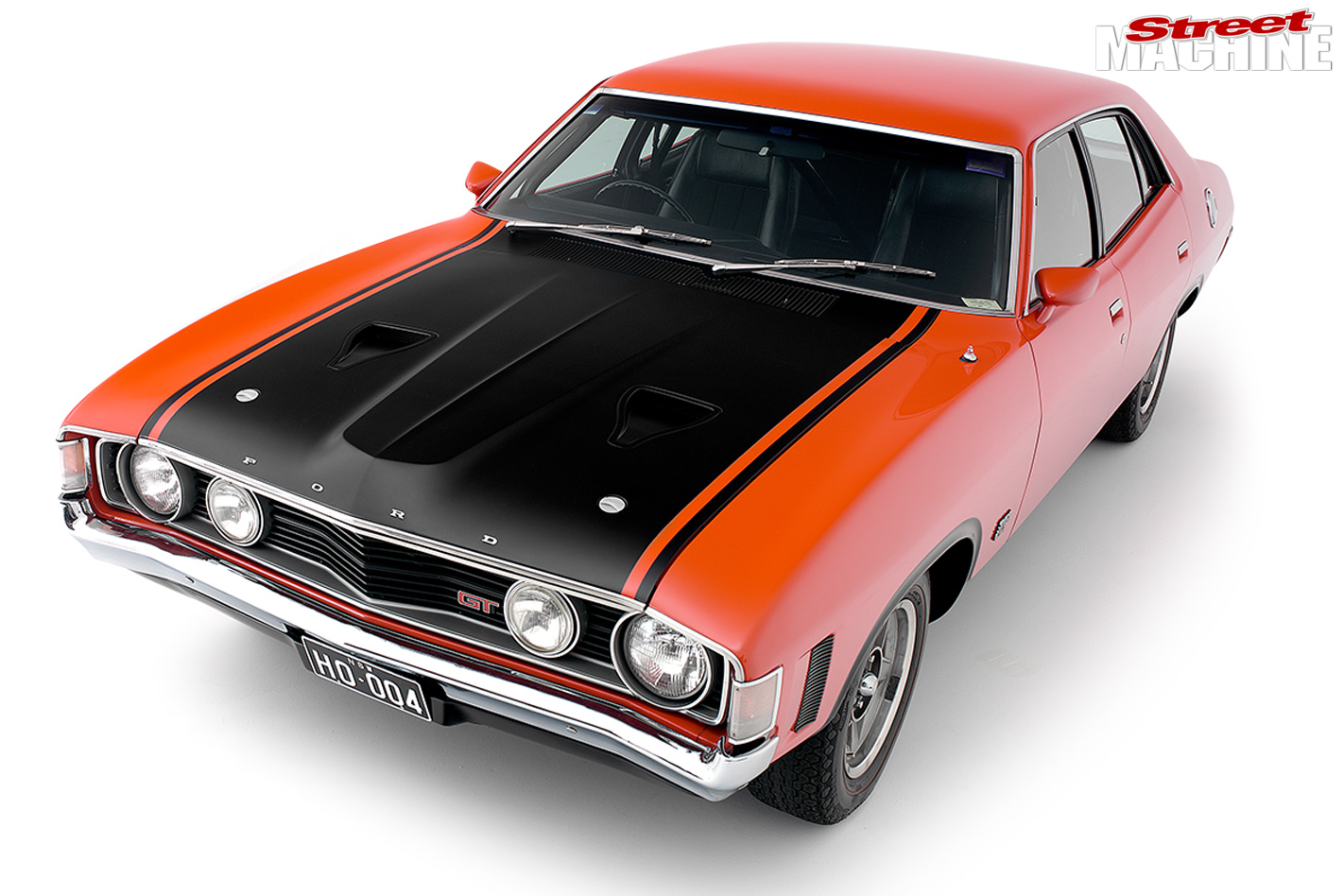 One of the racecars was sold to NSW rally driver Bruce Hodgson who rallied it in competition. It was eventually destroyed and no longer exists. Another was sold to Queensland rally driver Keith Goodall and subsequently bought by Queensland collector David Bowden who still owns it.

The third car is in our photos. It was sold to John Goss to be raced but that didn’t happen and the car was sold to a private owner who kept it locked away and unchanged from its original specs until he sold it to current owner Paul Carthew in 2002.

The motor was the same 351 Cleveland the Phase III had, using the 780 Holley carb with manual choke, H&M headers, Shelby manifold, big valves, 21/8in dual exhaust and high-lift cam. It was rated by Ford at 320hp (238kW). A winged sump was to be used on racecars but the road-car sump was to have extra baffling to overcome oil surge.

The three racecars had ‘QC’ motors, hand-built and blueprinted. These were a $250 option on the Phase III for those buyers intending to race their cars. 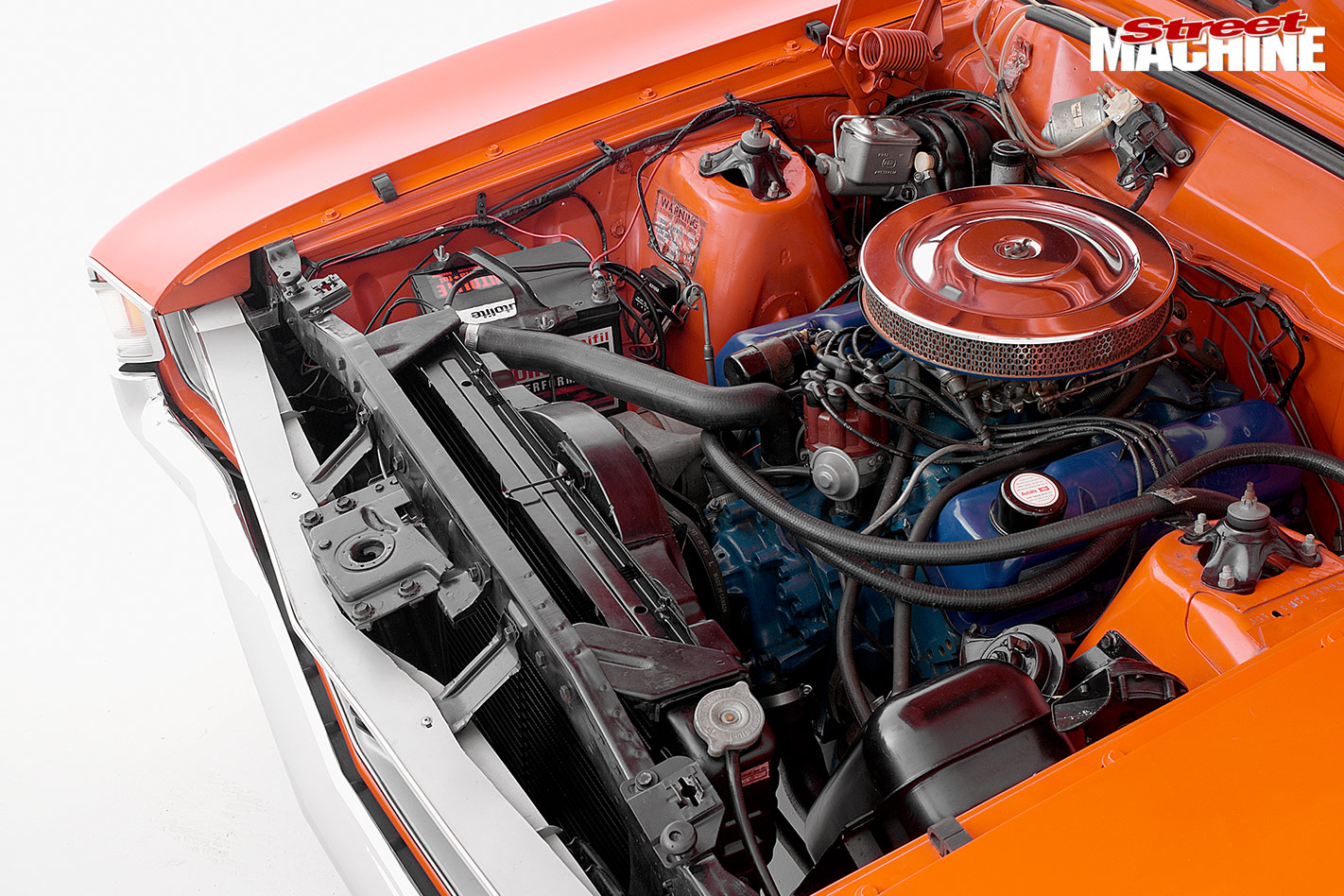 Good luck! Hope the bank manager’s a Ford freak and feeling generous when you ask him for the loan it’ll take to lever one of the three cars remaining from its owner’s grasp.

So, what are they worth? Whatever you’re prepared to pay for them. None of the owners is prepared to ’fess up to what they handed over for theirs, or how much they would want before they’d let theirs go.

Safe to say though that $200,000* isn’t out of the ballpark today, but with Phase IIIs making record prices right now it wouldn’t be a surprise to see a price tag of a quarter of a million bucks on the one and only production car.

Only a handful of people have ever driven a Phase IV GT HO. Even Allan Moffat never got the chance until 2000 when he did a handful of laps around Brisbane’s Lakeside Raceway in the car owned by David Bowden. 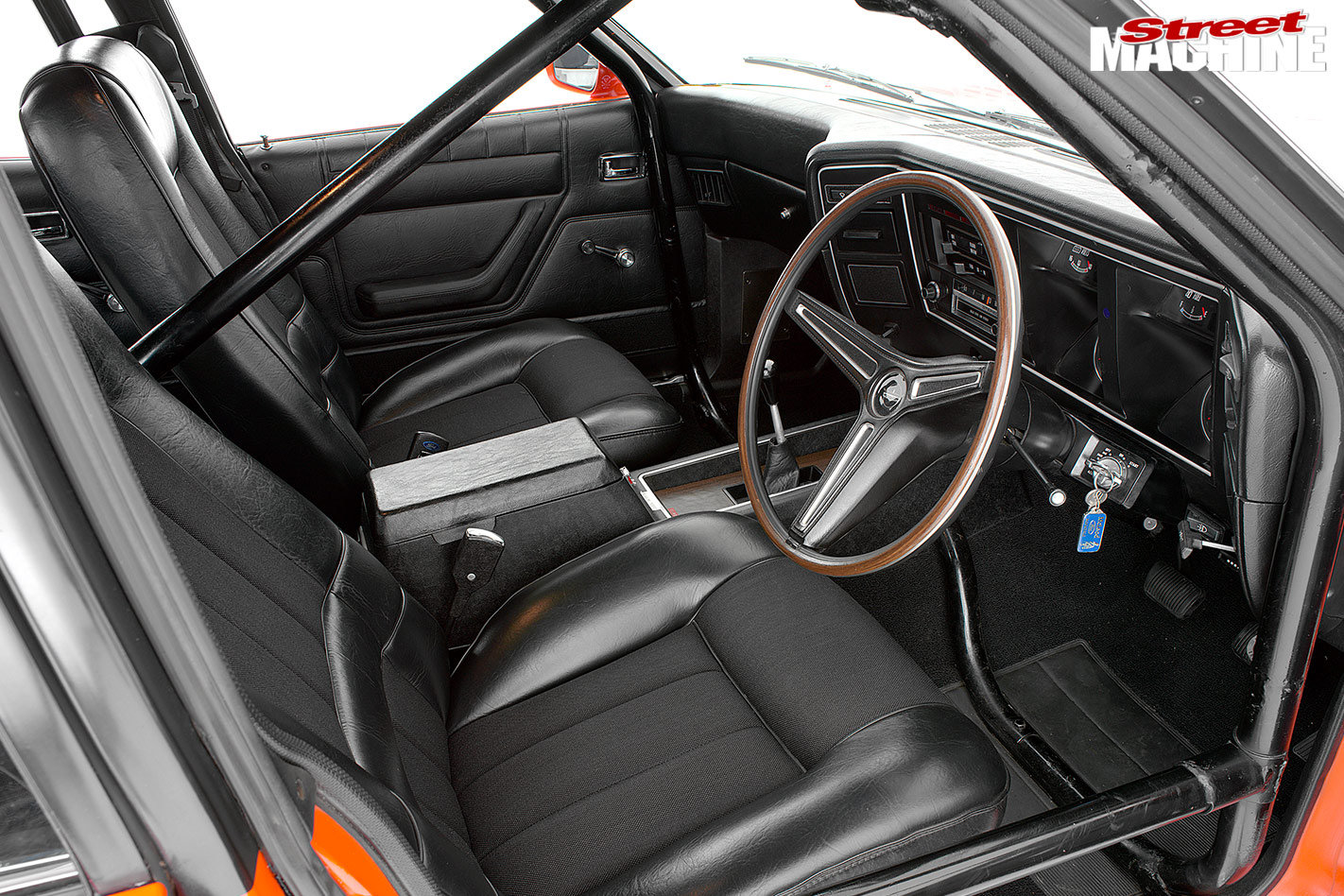 While acknowledging that Bowden’s Phase IV was a long way from being race ready, Moffat reckoned it would have been a good thing to win Bathurst in 1972 had he been driving the Phase IV instead of the Phase III.

“It would have been awesome,” Moffat says of those rare few laps in 2000. “There’s no doubt I could have given Peter Brock a hard time in 1972 in that car.”

Fred Gibson drove our feature car back in 1977 for Racing Car News. “She’s a lot smoother, a lot better car than the Phase III ever was,” he said. “It would have been a beautiful road car and could have been developed into a top racecar.”

The XR is one of a total of five Falcon GTs he owns, the others being a Phase III HO, an XB coupe, a 30th anniversary EL and the Phase IV.

He says he’s a traitor, the first Ford fan in a Holden family, but reckons he couldn’t help himself when he fell for the XR GT back in 1967. “It was so far ahead of anything else at the time,” he says. “They were a real chick magnet in their day.”

Paul has done less than 500 miles in his best toy, but he’s not afraid to drive it, handling peak-hour traffic on the way to our photo shoot. 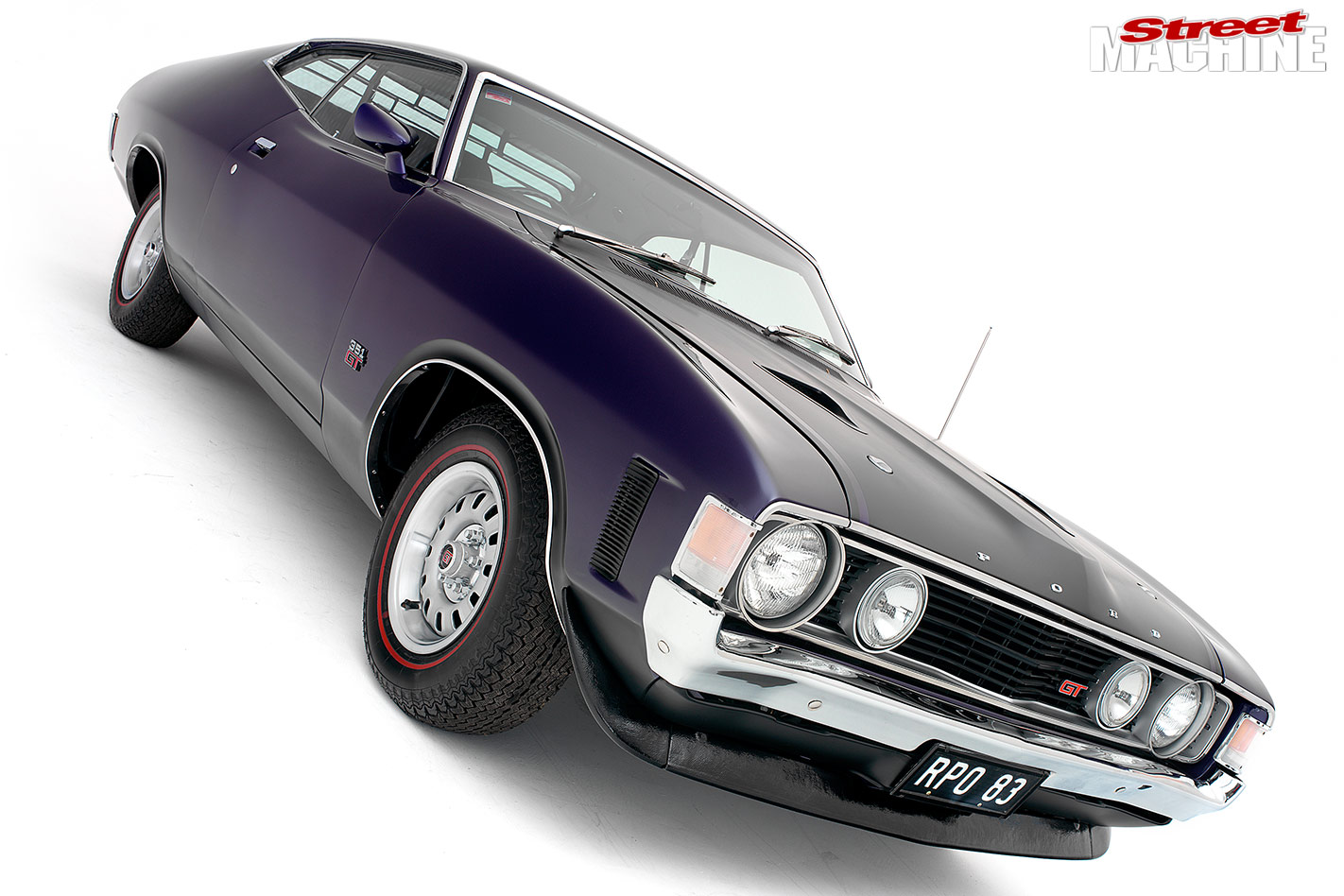 There was no fanfare when Ford unleashed its ‘special’ XA GT in 1973. No announcements, no press releases to the media, they simply slipped it out to dealers and told them to keep quiet about it. After all the shit they copped over the Phase IV the company didn’t want it widely known they were building a supercar.

The Regular Production Option 83 was essentially conceived to dispose of the bits and pieces left over from the Phase IV project, the components that Ford had bought in readiness for the Phase IV production build and found themselves stuck with.

If you were tipped off to the existence of the RPO 83 you could get yourself one hell of a rocket for which you didn’t have to shell out any more than the price of a regular GT, which was pretty tame by comparison.

You needed a pretty sharp eye to pick an RPO 83 from the GT crowd, as there were no badges to identify them. The giveaways were in the detail, such as the choke knob on the dash. If you looked under the bonnet you’d most likely find a 780 Holley carb, the same as those fitted to the Phase III HO, Phase III extractors, a modified oil pan with additional baffles to prevent oil surge, and a modified clutch pipe to prevent overheating of the clutch fluid, while under the rear you might also find disc brakes. But you might not find those things either, it was an option with changing content. 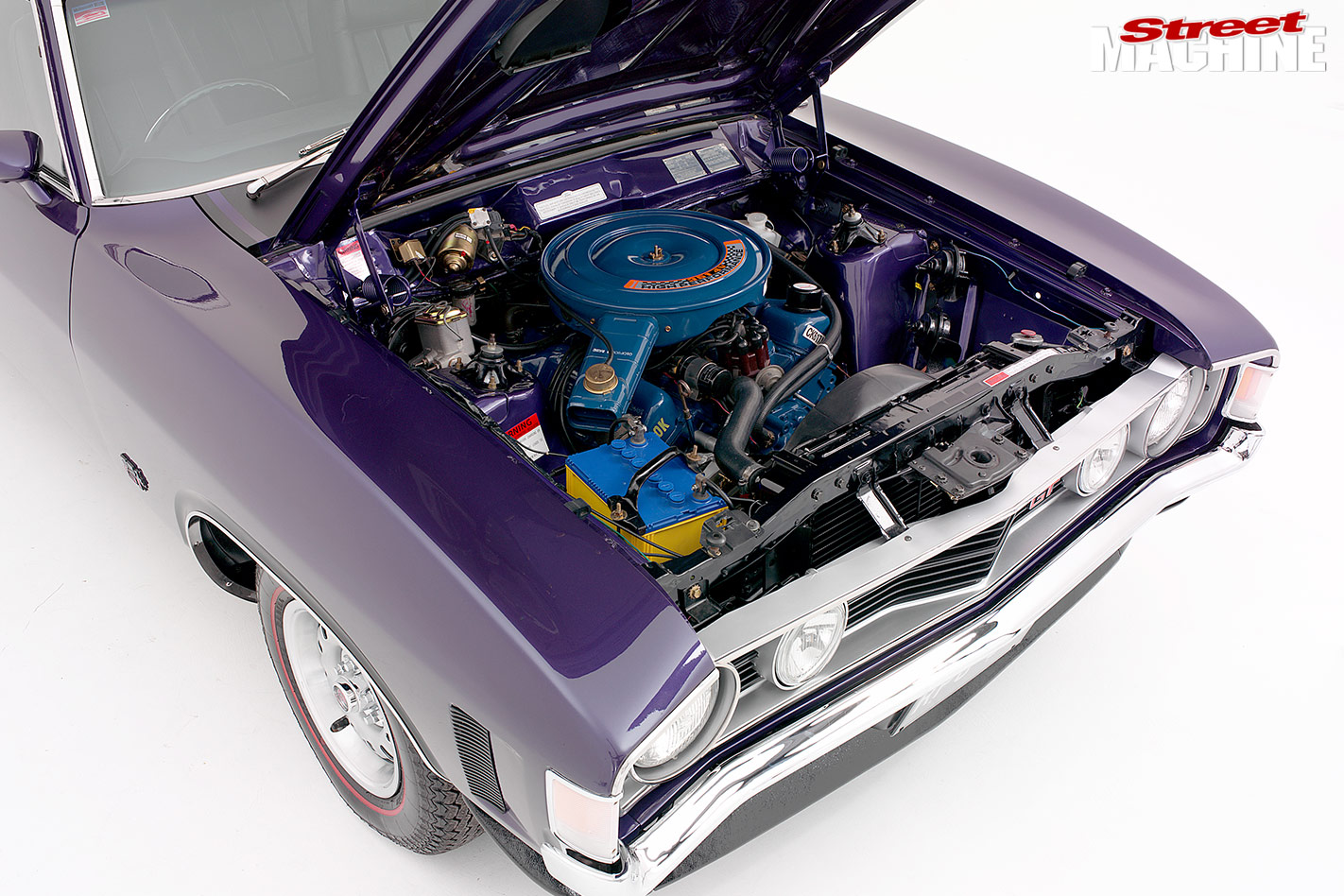 Some were built with the standard cast-iron exhaust manifolds, some with the Phase IV winged sump, some had an 8000rpm tacho, most had rear drum brakes. It seems it was the luck of the draw that determined what you got.

It’s been claimed that Ford built 252 XA GTs with RPO 83; 131 of them were four-door sedans and 121 were coupes. Most were built in August 1973, and were released later that same month or early in September.

Because Ford said nothing at the time, few buyers knew what they were getting. It’s also the reason the RPO 83 has been a secret for so long. It’s only now that the truth of the ‘Special’ XA GT is becoming better known.

It's a bit easier to buy an RPO 83 than a Phase IV but you’d better be quick because the secret’s getting out. There is a growing appreciation of XA and XB GTs, which is being translated into higher prices, and the highest prices being realised are for XAs with RPO 83.

On today’s market* an XA GT four-door with RPO 83 is worth up to $50,000 and more if it’s in good original condition with matching numbers. Mint, fully-restored examples are capable of fetching over $100,000. Coupes are more desirable and cars in similar condition will be worth up to $5000 more. 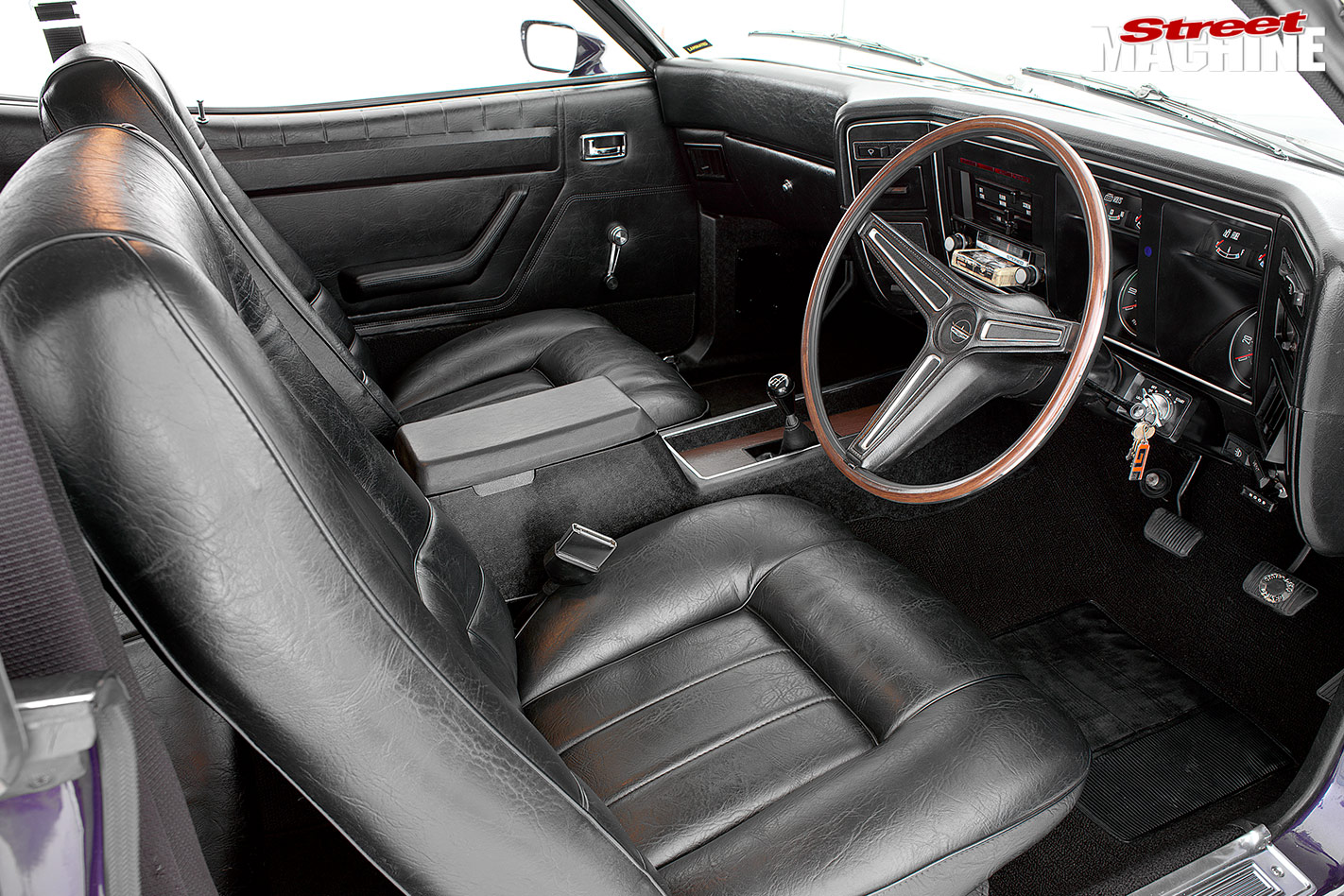 The RPO’s interior is ultra-neat – love that eight-track stereo!

Whatever the truth is, Ford admitted the RPO had more mid-range grunt than a Phase III, which would have made it stronger over the quarter-mile. The owner of the beautiful Wild Violet RPO 83 in our pics, George, reckons a mid-14s quarter would probably have been possible with a top speed as high as 150mph (241km/h).

George didn’t realise his Wild Violet XA coupe was an RPO 83 when he bought it from the original owner in the mid-1990s; he just wanted an XA GT coupe. “I was into XA and XB coupes,” he said. “They’re tough-looking cars, much tougher than the four-doors.” 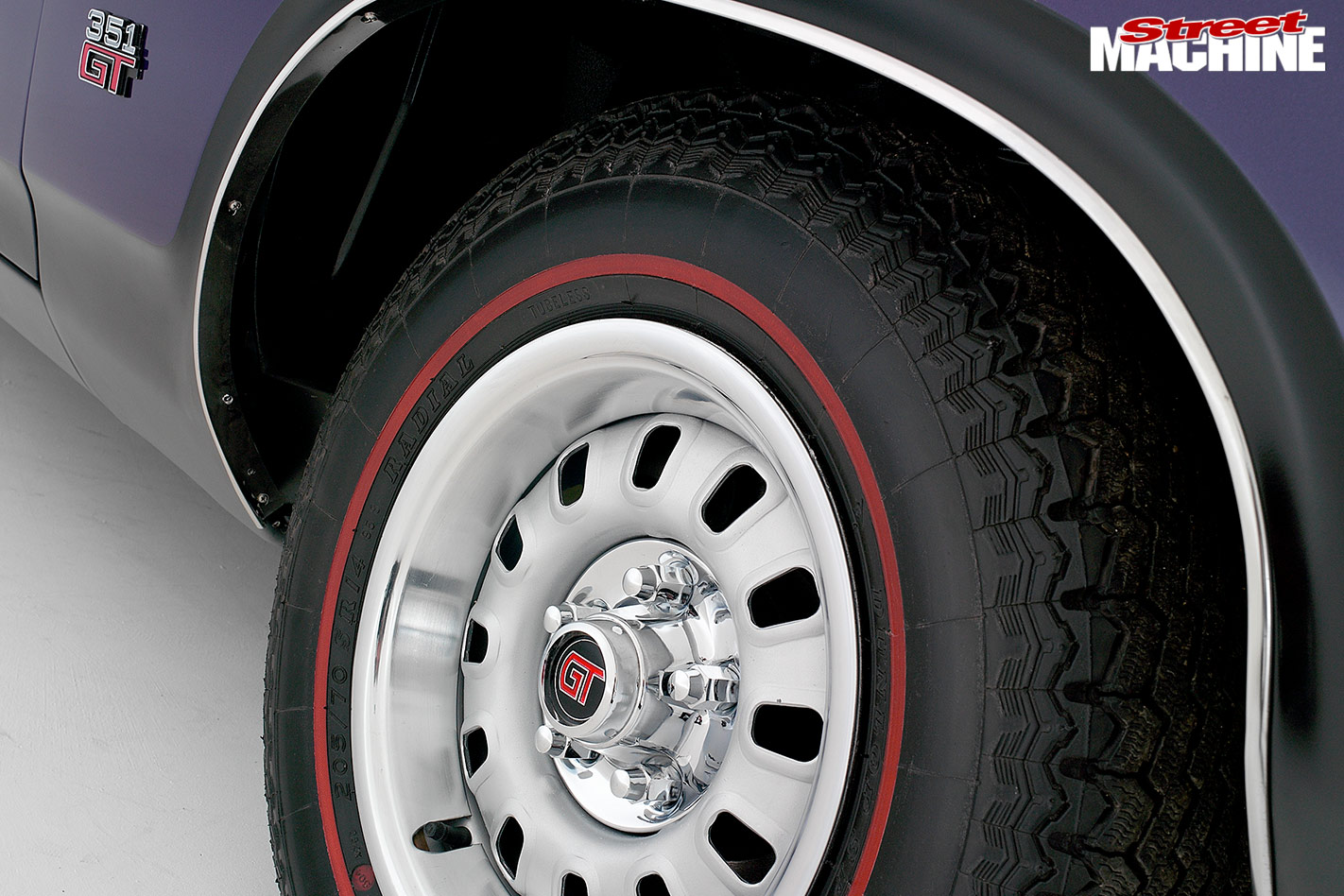 Oddly the original owner wasn’t aware he was getting an RPO 83 when he bought it new. He and his brother each bought Wild Violet XA GT coupes, and by chance one came with the RPO 83 option and the other didn’t.

George sold the coupe to another GT fan so he could fund other projects he had on the go at the time, but there was the condition that he had first refusal if the new owner ever decided to sell it again. He did, after the Bathurst GT Nats this year, and George snapped it up.

“I like their rarity and collectability,” George says. “They’ve been sleepers for a long time.”