What does an Aussie pro golfer drive? Other than golfballs, that is?

Some people reckon ace golfer Stuart Appleby's mad for cutting up a genuine M5. We reckon he's a genius

THERE is only one M5 ute in the world and you’re looking at it. It’s unlikely that there’ll ever be another one built as it was a monumental task and one that Australian pro golfer Stuart Appleby initially had no idea how to accomplish. 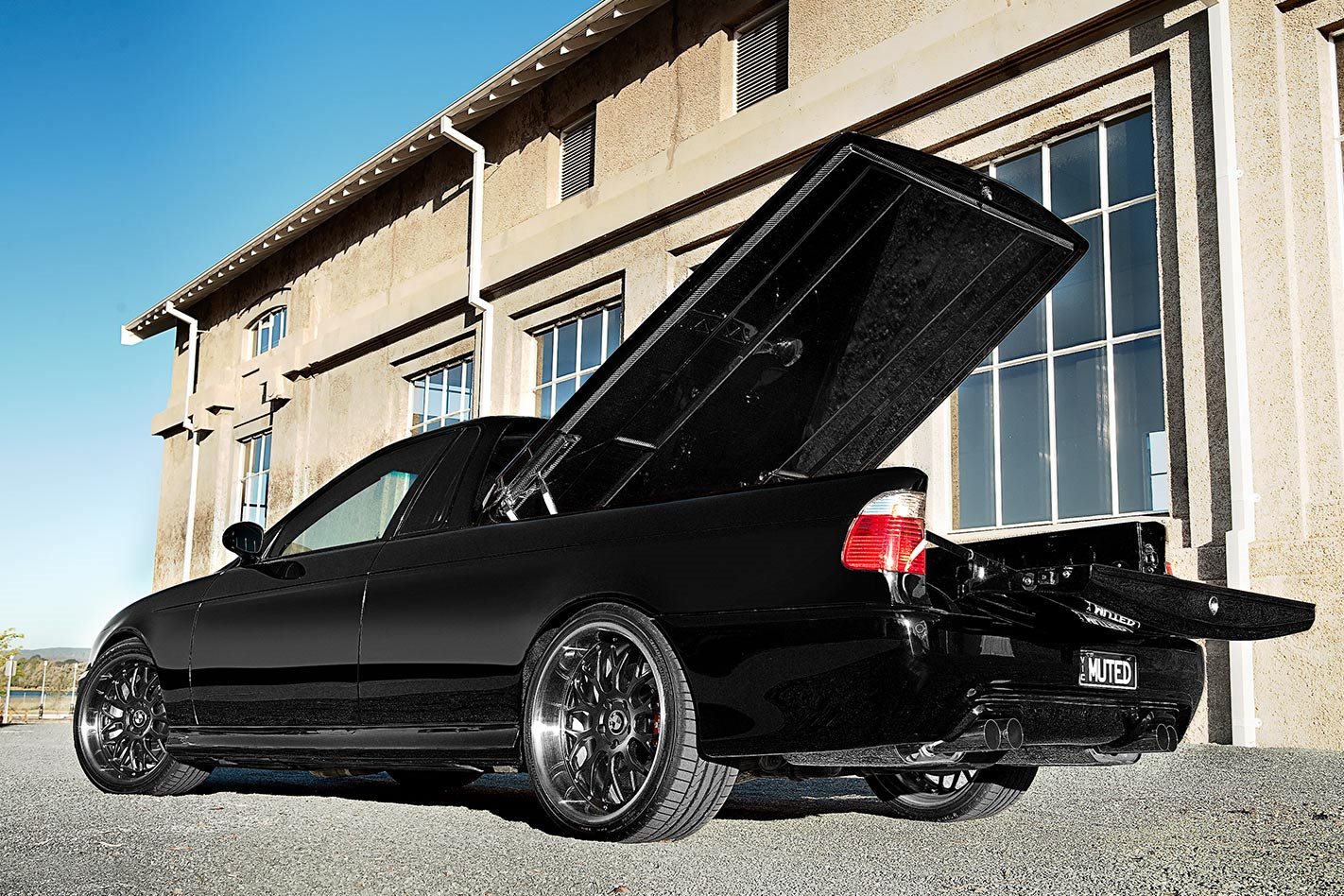 Won’t be too many bales of hay or engine blocks going in there; even the golf clubs ride in the front with Stuart!

“I had no clue. It was just pure luck that I read about Southern Rod & Custom in Unique Cars and saw that they were in Deniliquin, only an hour and 15 minutes away,” he says. 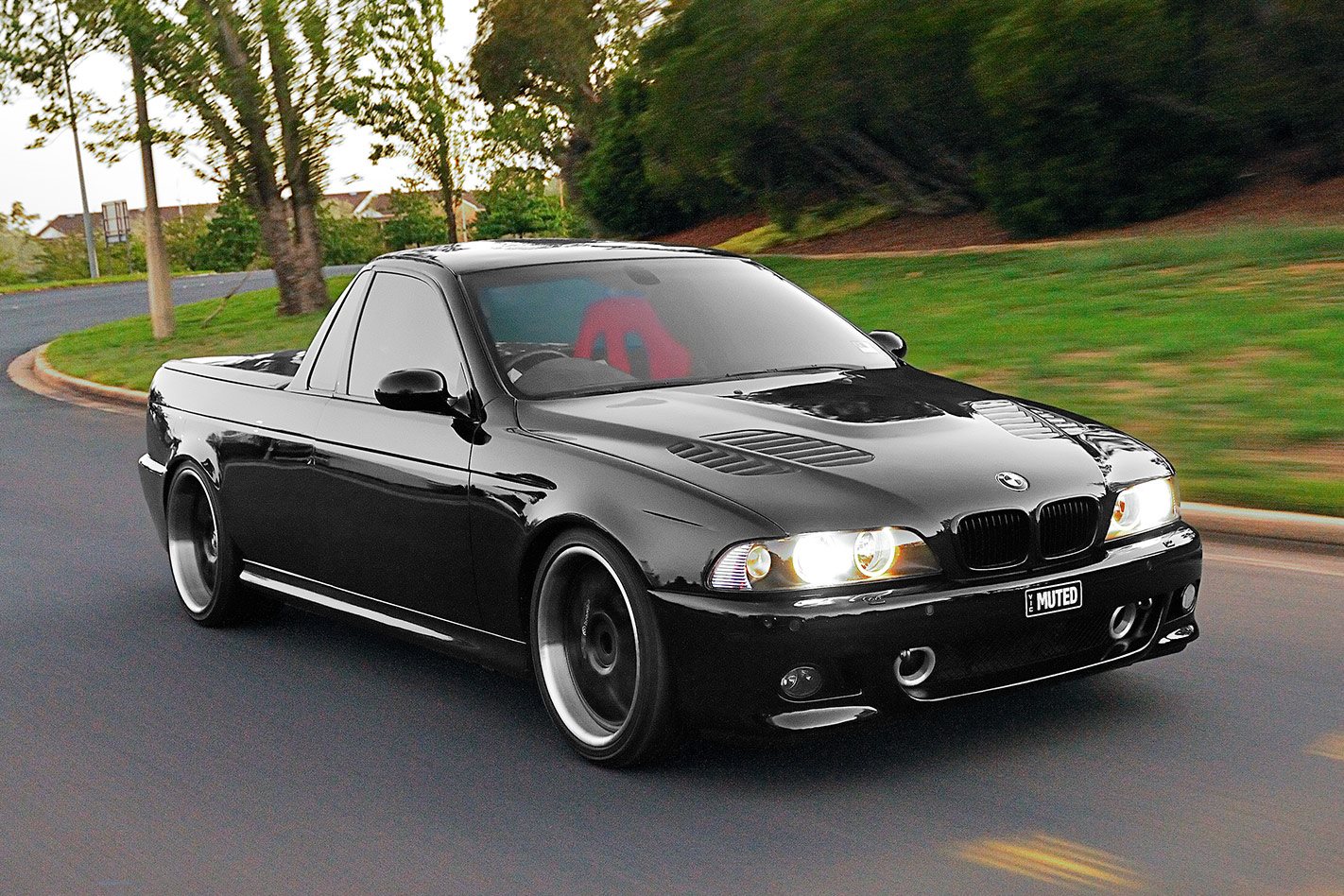 Muted or M Uted? Extra marks for having a clever personalised plate

“I drive over and bump into this larrikin red-haired, tattoo-covered bloke and think: ‘What have I got myself in for?’ But he showed me around and I was pretty convinced he knew what he was doing — not once did he give me the ‘what the hell are you talking about?’ look.”

The easy option would’ve been to start with something less expensive, like your plain-Jane 5-series V8, but Stuart’s got a thing for M cars and plumped for the best M5 sedan in Australia. 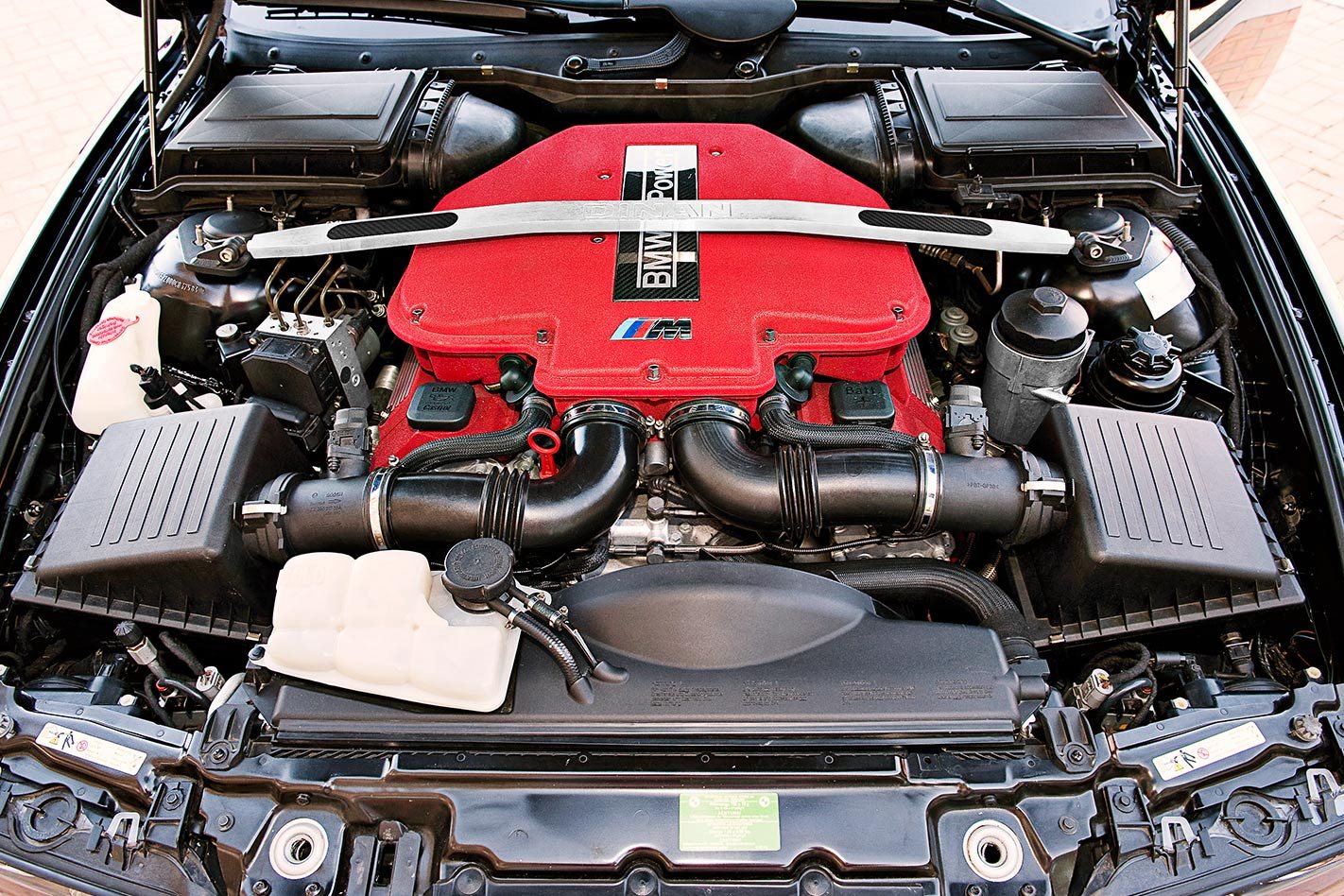 “It’s got a Hewland rear-end, the same as they use in the European touring cars,” SR&C’s Shane Rowe says. “That’s what you paid the extra for. They were basically a race car in street trim, but with really good air conditioning.” 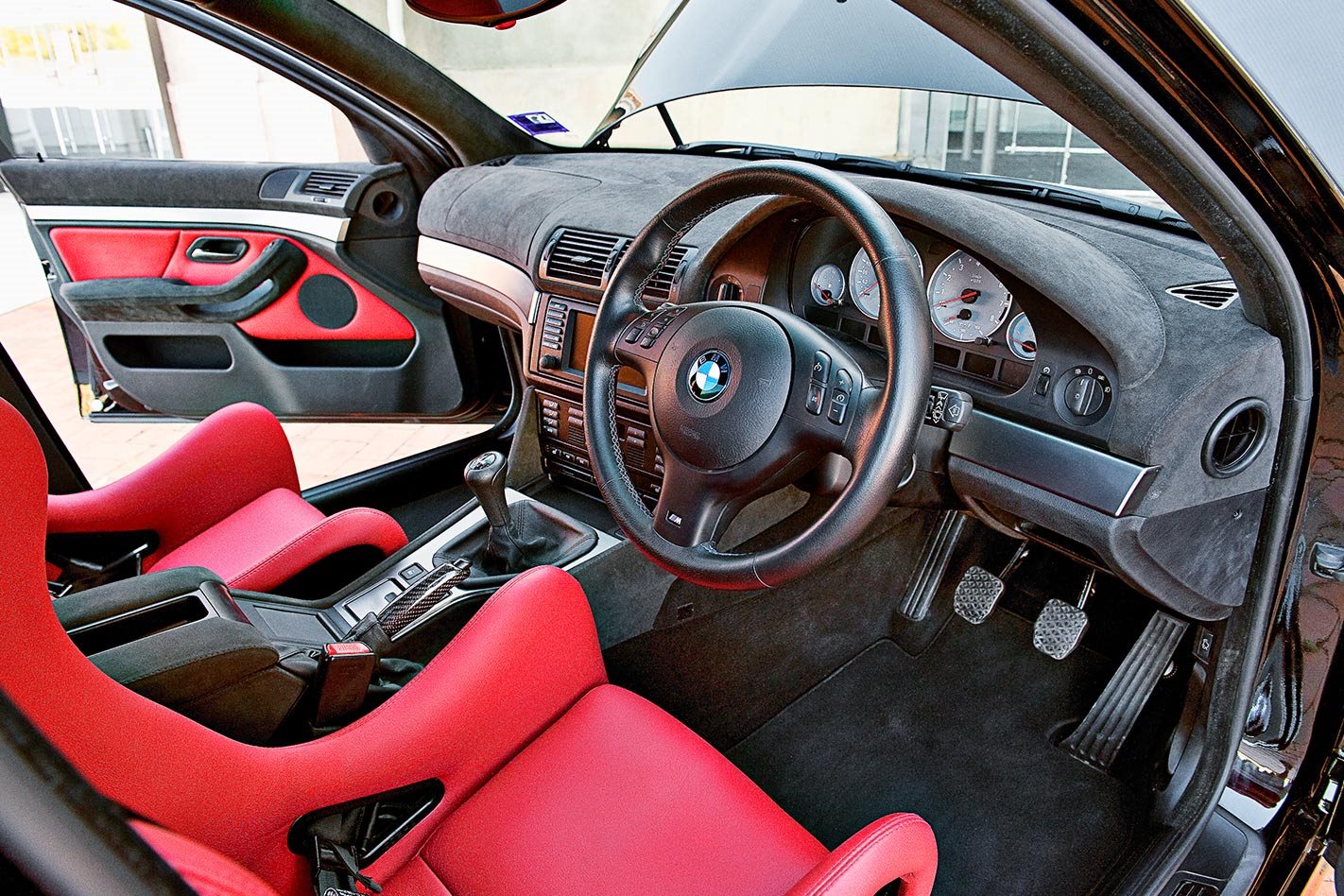 Cobra race seats and Schroth belts are the main deviations from stock. Red leather adds a little colour and the dash is covered in Alcantara

After stripping the car down to a bare shell — and taking thousands of photos so that they could remember how it all went back together — it was put on a chassis jig and basically cut in half. This was done because the car needed to be lengthened 125mm to get it closer to the longer wheelbase typical of a ute. After that, the body was taken back to its bare essentials. 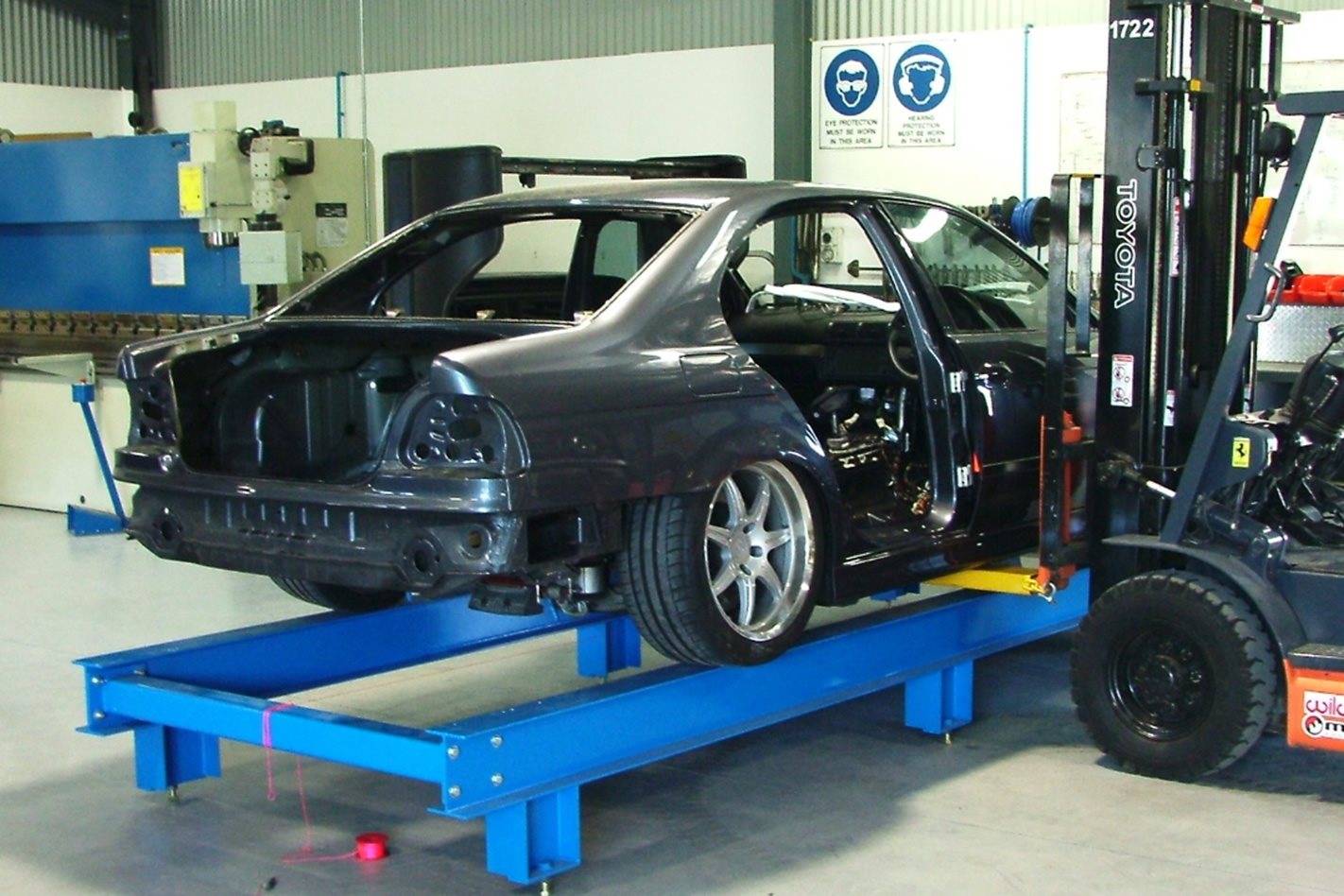 The jig that made sure everything stayed square and true. In the end it was near perfect

“From the dash back, it’s virtually all brand new,” Shane says. “We took the whole car down to the floor pan and built the internal structures. We built the car from the inside out.”

Throughout the process, Shane and his team were very mindful that they had to keep the core of what made the car an M5 and build it so it would look like it left the factory that way. 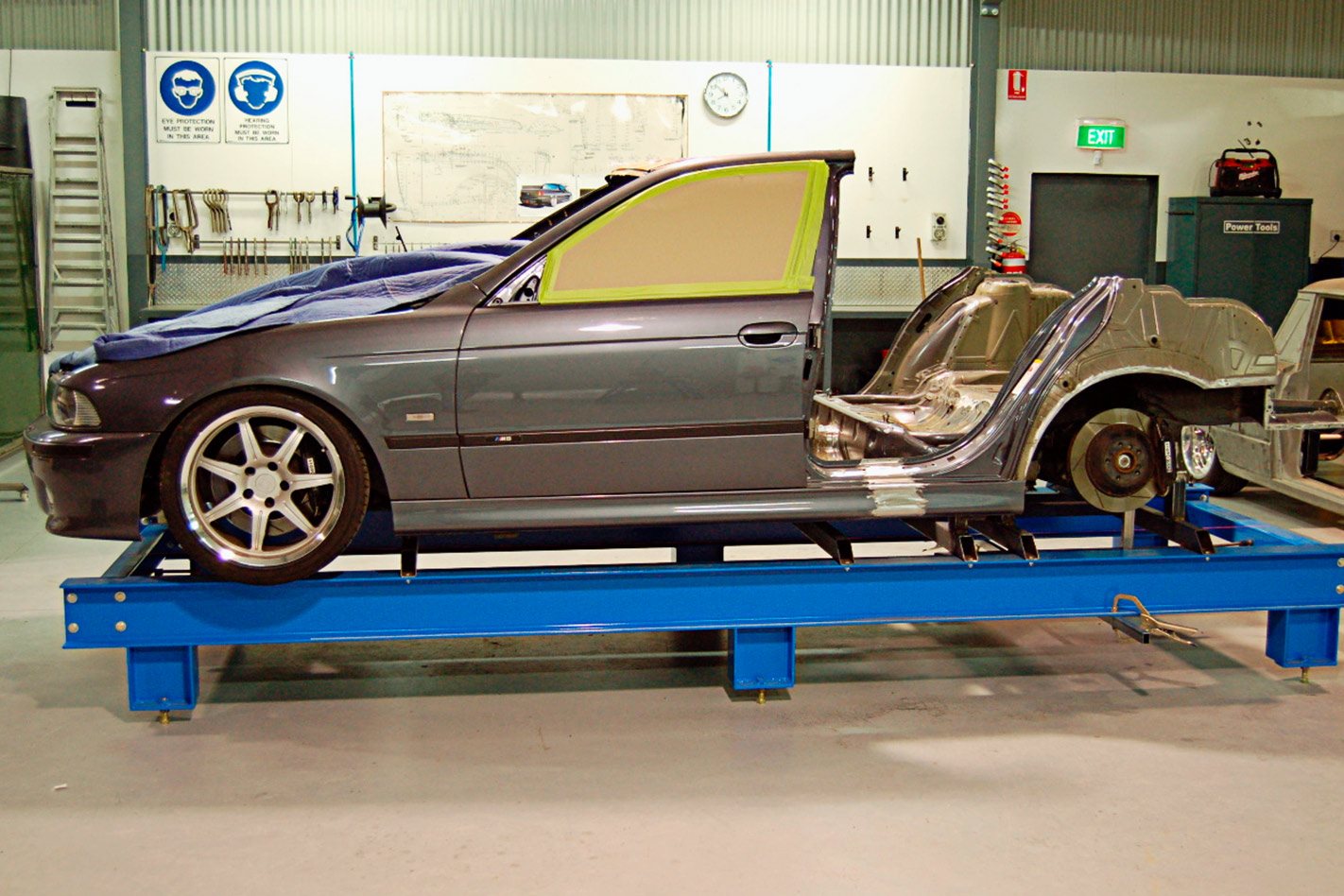 “On the standard car, the parcel shelf is the top shock mount, so we had to have custom struts made by Koni,” Shane says. “That stuff was quite expensive but we were lucky because back then Stuart was sponsored by Bridgestone, so he knew some people who could pull a few strings.” 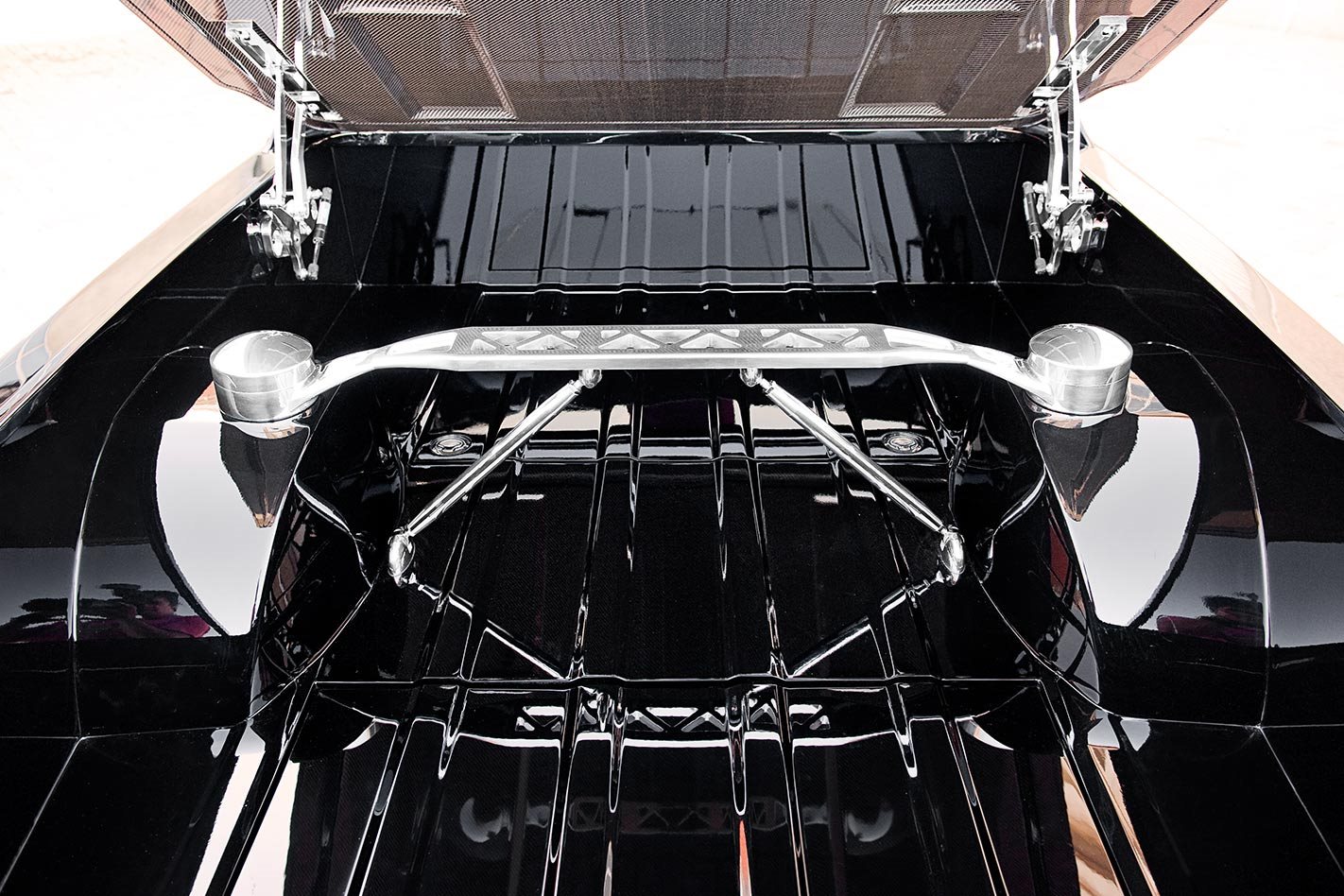 One of the highlights is the CNC-machined tower brace in the cargo area (above).

“We wanted to retain that and add a bit of wow and pizzazz when you opened the back,” Shane says. “We had a friend design the whole thing in a 3D modelling program and then went about machining it out of a huge chunk of billet. It was a 1200 x 300 x 300mm block. Forklift material! There wasn’t much left when it was finished.” 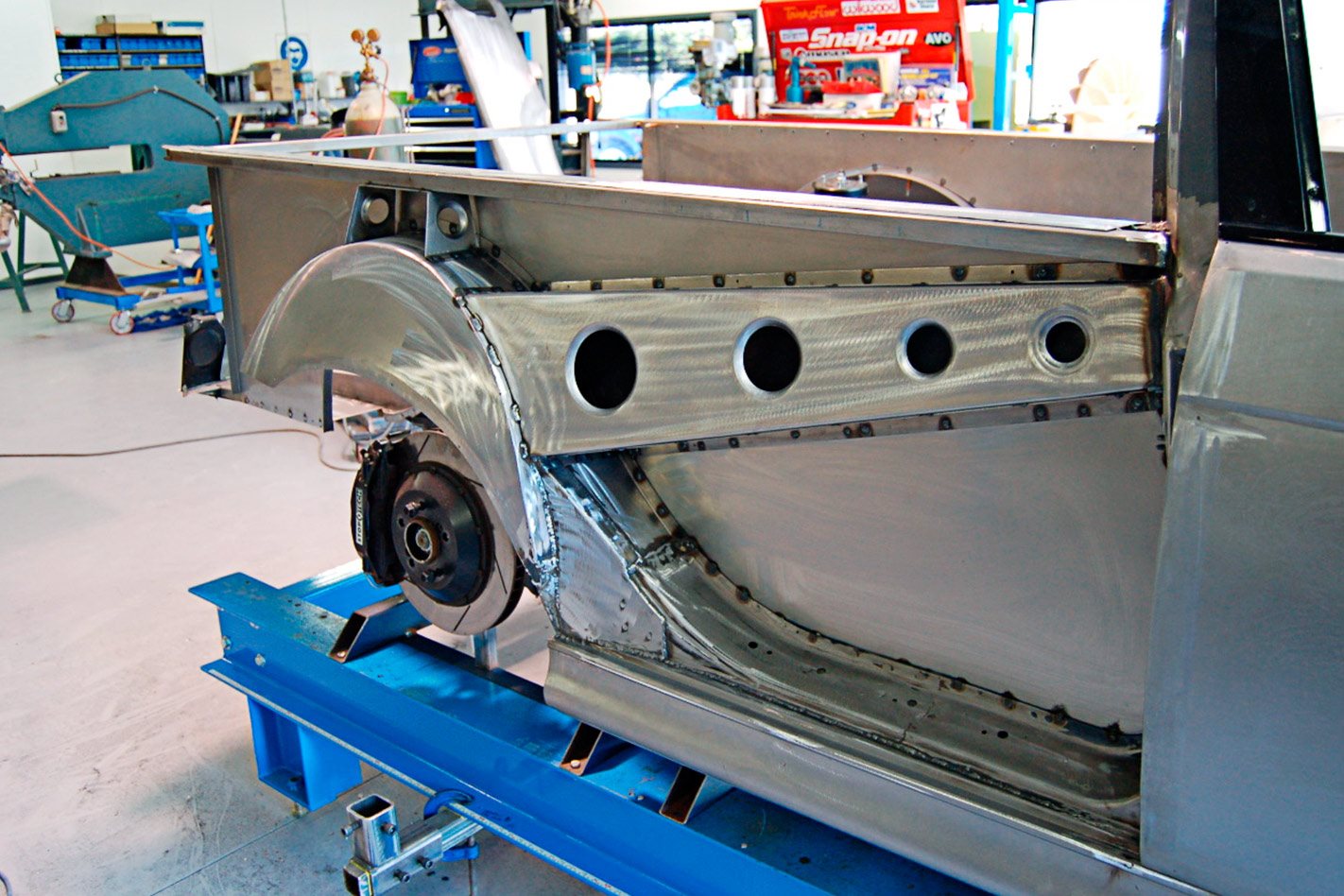 Shane says they built the car from the inside out

Shane says they built the car from the inside outAs well as the extra length, the car was widened 45mm. Once again, this was partially for practicality but a lot more to do with giving the car a big-hipped performance look.

“Stuart’s got a Lamborghini Gallardo in the US. It’s got that really wide supercar look at the back and he wanted to transfer that into the ute.” 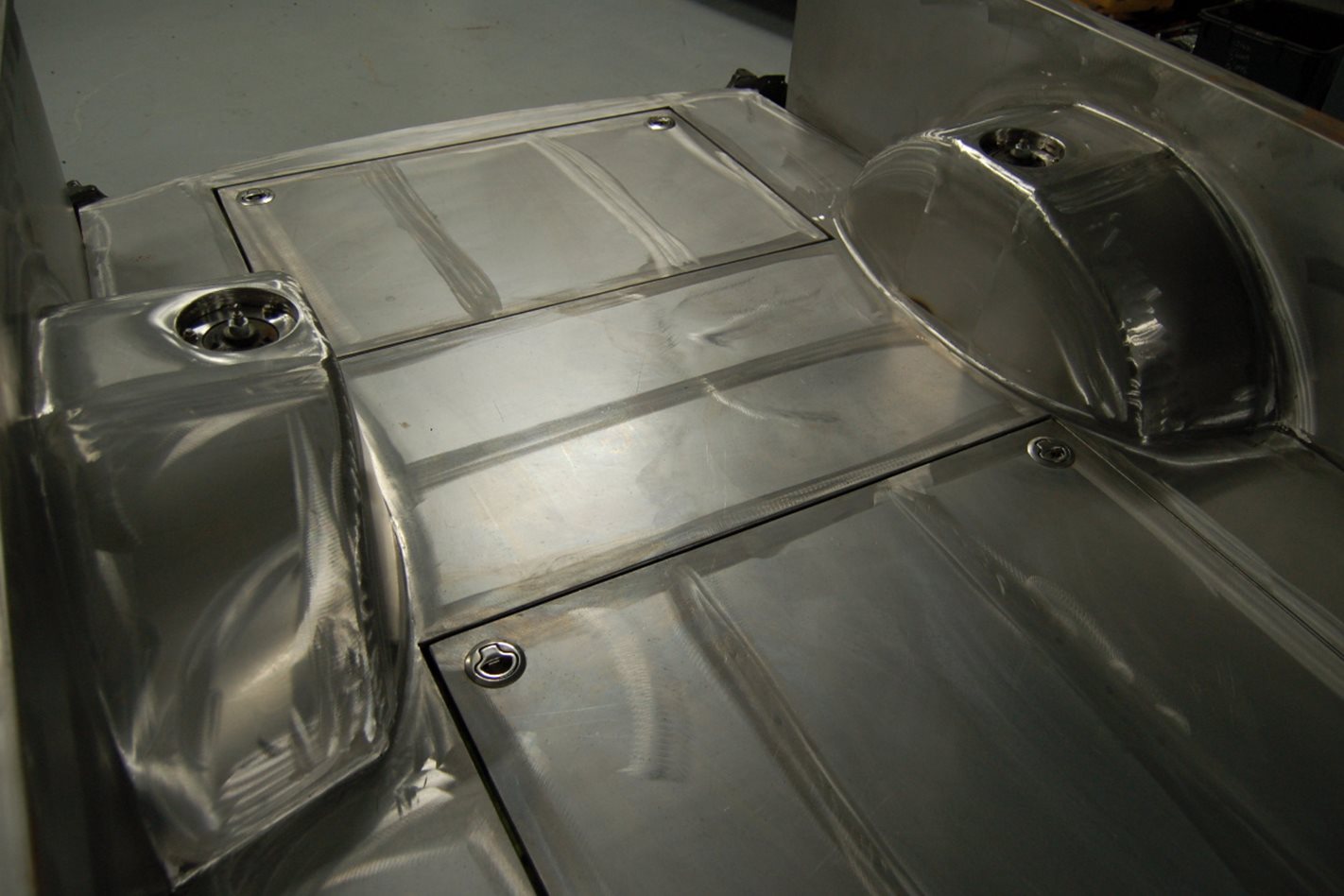 The biggest headache and the part of the build that had Shane scratching his noggin the most was the tailgate. The solution was to use a beefy single central hinge. This was necessary as there is quite a curve to the back of the tailgate and neither Shane nor Stuart wanted ugly hinges hanging out the back.

Colour choice is one of the biggest decisions anyone building a car has to make. Stuart had toyed with the idea of two-tone paint but Shane was adamant that it should be black, so they came to a compromise. 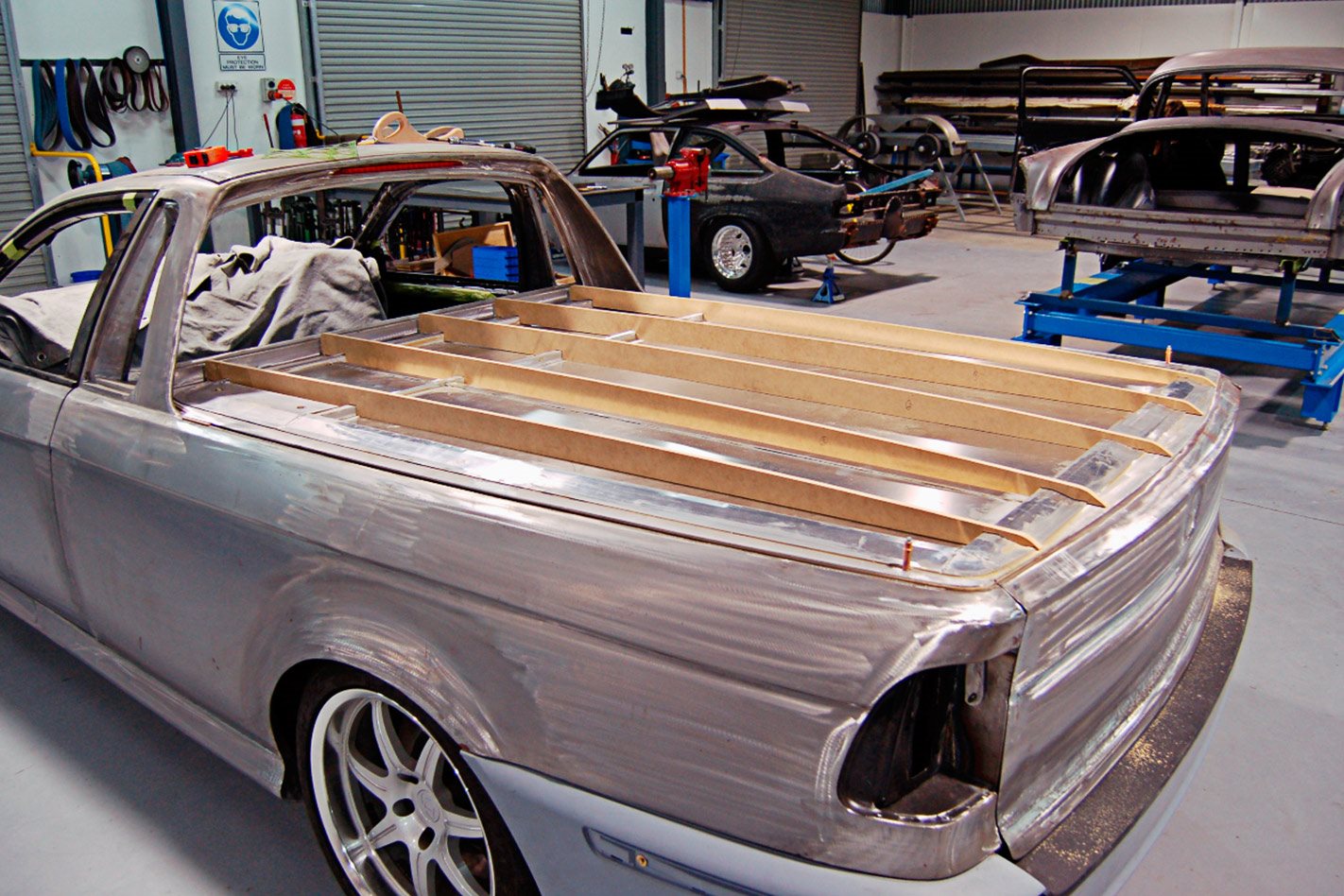 Essentially the entire top section of the car has a carbon-fibre finish. The bonnet is a Vorsteiner GTR full carbon unit, the roof has been wrapped in carbon fibre and the rear tray cover was first fabricated in aluminium and then moulded from carbon fibre. It looks purposeful but when you put it up against gloss black ink by one of the best painters in the country, it can look a little grey and dull. So there’s a trick: “We used a PPG 2K clear and tinted it with a bit of black, which makes the carbon fibre take on a bronze look. It looks sensational with the sun on it.” 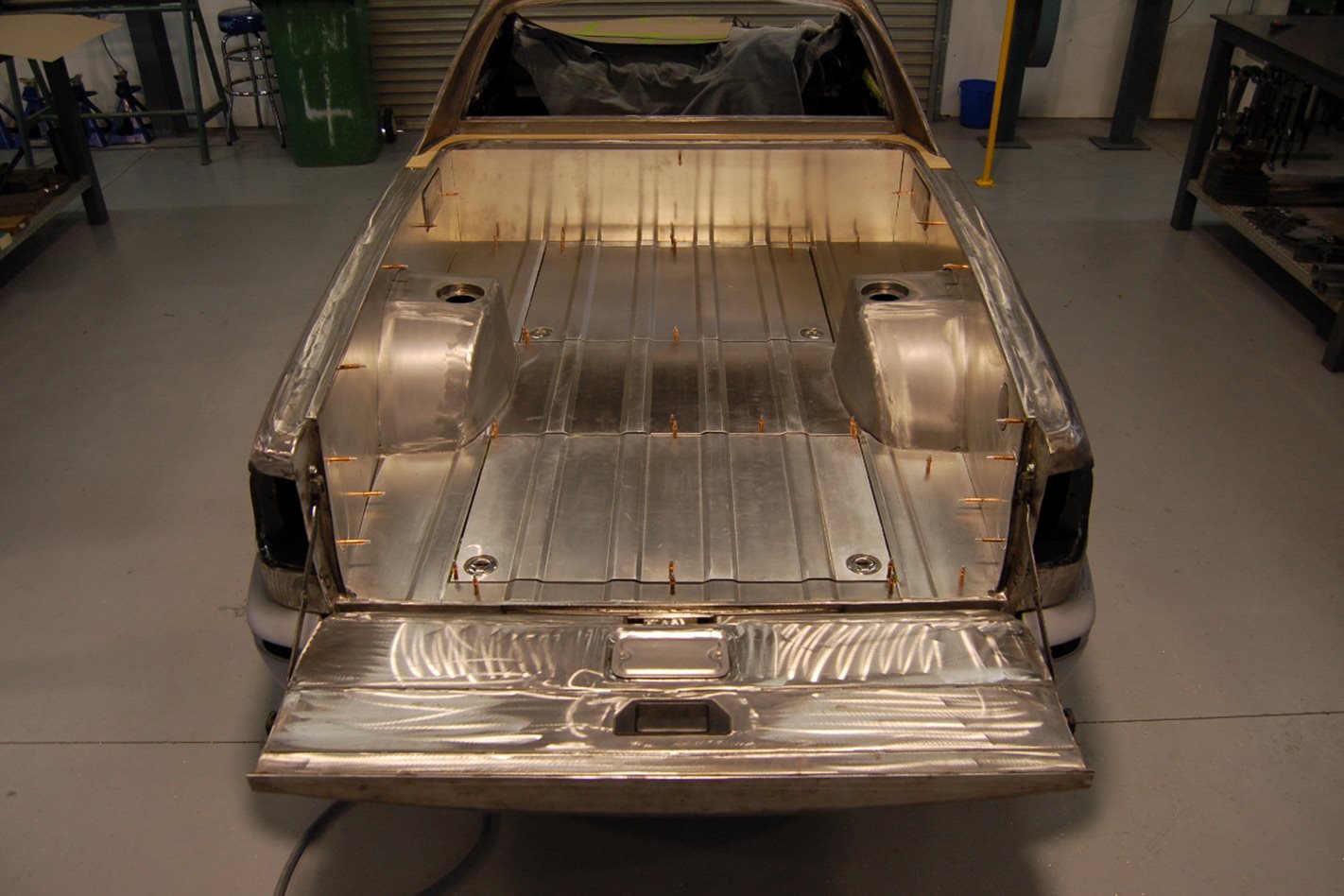 Out in the sun is where Stuart will be spending a lot of time in it — this is no show pony. 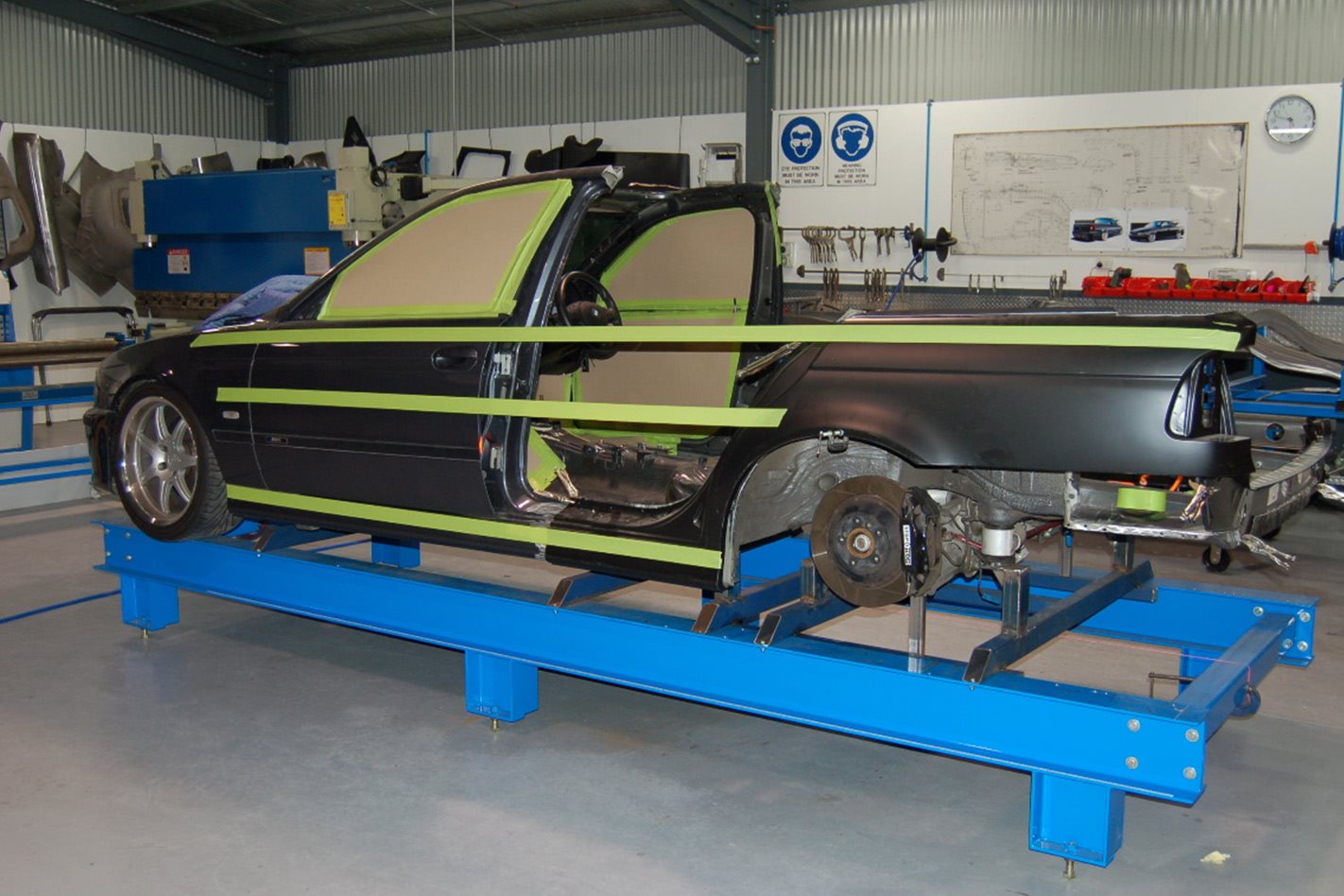 “The weekend he picked it up, he was just going to take it home but he ended up going to Bright and doing the hillclimb and he gave it a flogging all the way home,” Shane says. “When we had it at Summernats, he drove it home from Canberra. He’s not afraid to drive it and he’s not going to baby it.” 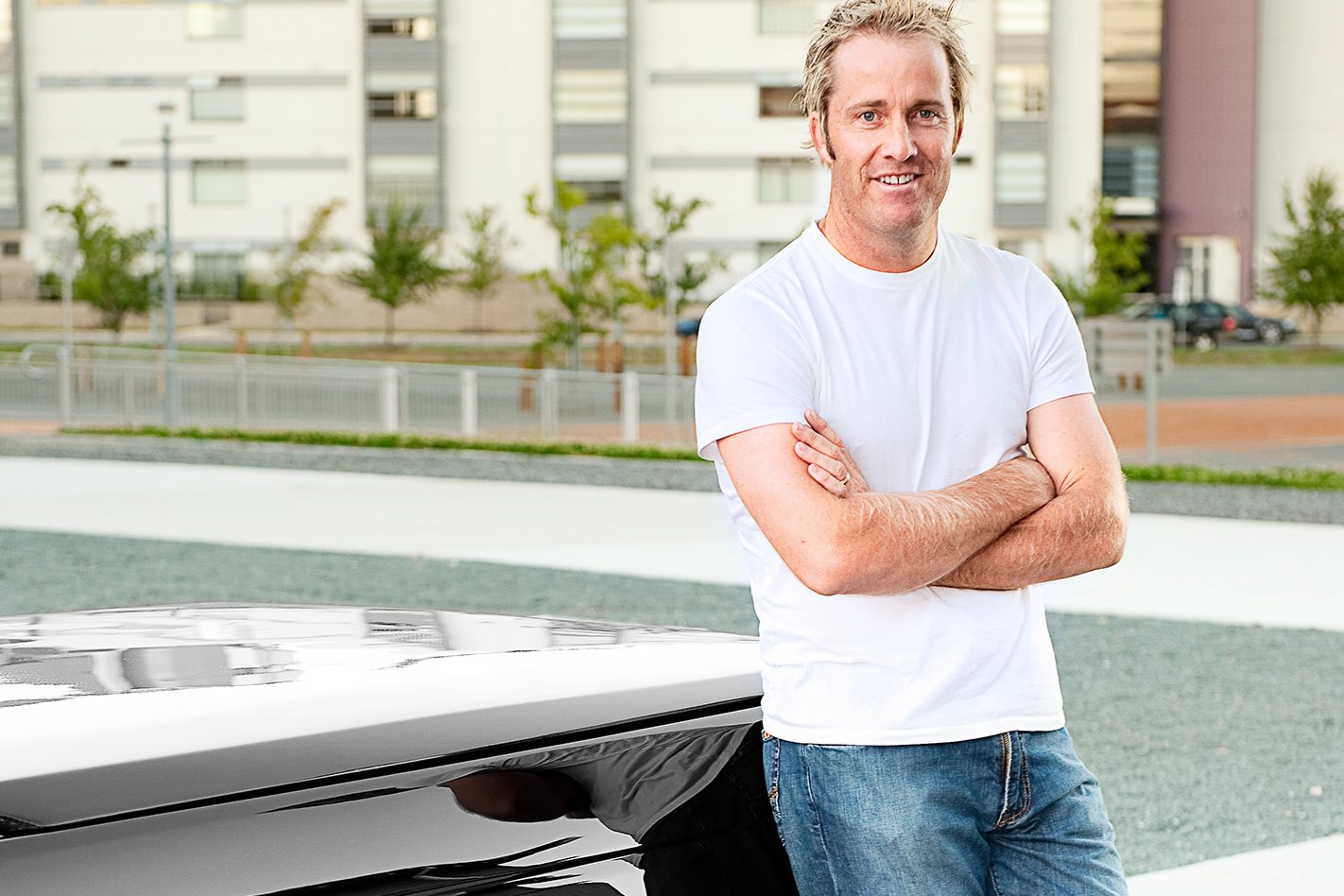